Don't you love it when you ask your child a question and the response you get is, "I don't know". I remember giving this answer to my parents and not thinking twice about it. But as a parent, I now find it very frustrating to deal with. How does someone not know the answer to "Why are your pants all cut up?"!! 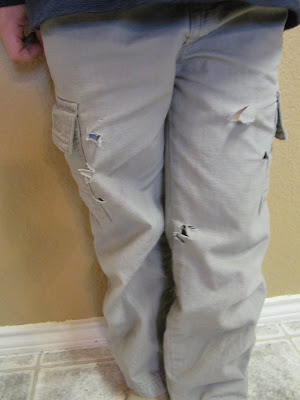 Mind you, these pants were ON the boy at the time said incident occurred. He went to school with intact pants and when I picked him up he looked like he had had an encounter with Edward Scissorhands! When I asked him what happened all I got for a response was, "I don't know". But after a little more coaxing I learned that he was supposed to be doing work at his desk but he was bored so he got out his scissors and cut his pants. Hmmm, not what I would have thought to do if I were bored but hey who am I to question that line of reasoning from a 5 year old. He did get a brief reminder about taking care of our things and how money doesn't grow on trees. 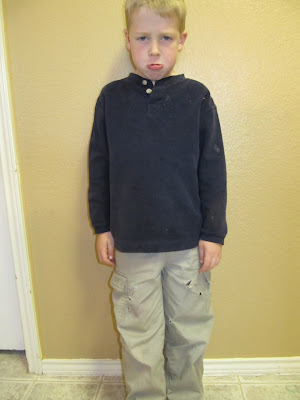 He felt bad and said that I could use all of the money in his piggy bank to buy him another pair of pants. Not necessary, little guy. But now you see why I am a big advocate of shopping consignment stores for good quality used clothing for kids. They will either grow out of it, draw on it with a marker, get grass stains on it, spill spaghetti sauce on it, or just plain cut it up intentionally with a good ol' pair of scissors before they ever get to wear it twice so why on earth would I spend good money on brand new expensive clothing?
at April 02, 2010
Email ThisBlogThis!Share to TwitterShare to FacebookShare to Pinterest