July 02, 2009
We didn't have any plans today. I know, it sounds crazy. No summer camp, no playdates with friends, no excursions around town. Somehow we had nothing to do. So Nicholas, Rachel, and I decided to go to a movie. I had planned to go to the free movie at Rave. It was a cute movie we haven't seen before, Tale of Depereaux, or something like that. But I had to run an errand on the way there and thanks to some really nice people who talked way more than they needed to, we didn't make it to the 10:00 movie until 10:15. Since it's a free movie you really have to get there early to get a seat so we just kept driving as we passed it by.

We headed to Studio Movie Grill because they have a summer movie special too and there movie doesn't start until 11:00. I knew they were showing "Happy Feet" for the movie special this week which we've seen a squillion times so I wasn't too excited about it but I had gotten Nicholas all excited about going to a movie so what was I going to do? We got there in plenty of time and made it up to the ticket counter. Although I was planning on spending just $3.00 for all to get in to, I realized that the new movie "Up" was showing at 11:00 too and ended up paying full price for tickets for that movie instead. Fortunately it was matinee pricing so it only cost me $10.

Since the movie was showing at Studio Movie Grill, it seemed only right that we take advantage of the wonderful opportunity to eat a meal during the movie so Nicholas and I both ordered lunch. That was a whopping $20 bucks! So my plans for seeing a free movie with perhaps a simple purchase of a bucket of popcorn had now turned into a $30 outing. But look how happy Nicholas was... 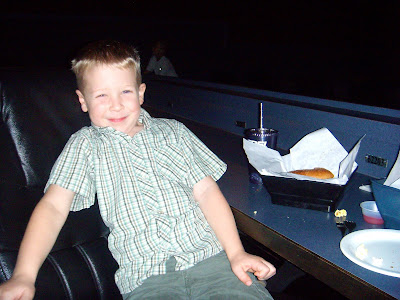 Although she is getting too big for it, I brought Rachel into the theater in her car carrier so that she would be able to lie down and hopefully fall asleep since she still likes her morning naps. She happily munched on some of her beloved puffs for a while, used her toys to play with my camera strap, but she wouldn't nap.

So I took her out and let her sit on my lap. She seemed to enjoy watching the movie at times - between the other times when she was grabbing my glasses off my face, reaching over and grabbing Nicholas' shirt, or pulling my plate over to her and my straw out of my drink. She is a rambuncious little thing! Eventually she decided she had seen and done all that she needed to do and she fell asleep in my arms. Awww!

(Photos courtesy of a nice stranger and Nicholas) 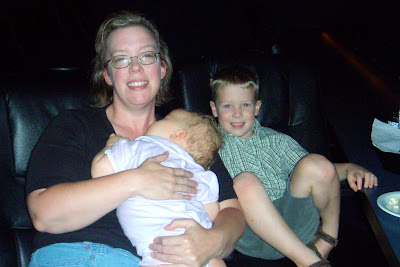 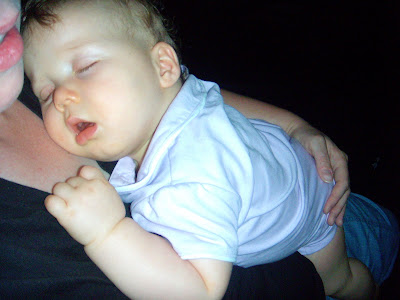