Rachel Can Pull Herself Up to Sit!

Today we were all in the bedroom playing. Rachel was crawling all around the room exploring on her own while the rest of us were just hanging out talking about plans for the day. Then I glanced over at Rachel and saw this... 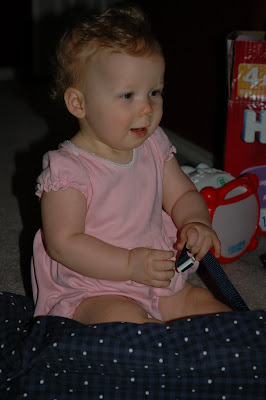 She was in a sitting position! No one in the room saw her get into a sitting position but certainly no one helped her do it. Wow! That's new. At first I wondered if I would get to see her do it again soon or if it was just luck that she had gotten herself up like that. But she has continued to do it over and over again without struggle.

I caught a quick video her sitting up before she tried to attack the video camera.

Of course, she was just had to sit up in her crib at naptime too, just to show me that she could. Her crib mattress is still in the highest position which is great for a newborn baby that can't go anywhere. But now that she is getting around so well and sitting up so easily, she could potentially pull herself up and over the crib railing. So we'll be lowering the crib mattress tonight before bedtime!

Rachel has also done other new things today. She has discovered how to take off her bib when I'm feeding her. She especially likes to do this AFTER it is covered in baby food so it now gets smeared all over.

She has also started drinking from a sippy cup! HOORAY! Yesterday I made a trip to Babies R Us and I studied every sippy cup there to try to find one that would be most like her usual way of getting milk. Success!

It's been a busy day for the little princess. Lots of learning and lots of little accomplishments all the time. It's such a wonderfully fun process to witness and be a part of!
at July 27, 2009
Email ThisBlogThis!Share to TwitterShare to FacebookShare to Pinterest