Have I Lost My Voice Forever?

Yesterday when I picked Nicholas up from school, his teacher mentioned to me that he seemed to be losing his voice. He's been coughing a little so I wasn't too surprised. Nicholas was very concerned about this though. He seemed really sad and worried and even had his little lip rolled out a bit. I asked him what was wrong and he said, "I'm sad because I've lost my voice. Have I lost my voice forever?" Poor little guy! It's kind of funny to think about how some things that we say in passing might sound to a four year old. They are so literal in their thinking that surely Nicholas thought he would never speak again. It happened again today when I told him that I was going to give him some medicine to help his cough. He asked, "Why do you want to help my cough? Don't you want to get rid of it instead?"

Nicholas had trouble sleeping last night because of his coughing so he's really tired and I've been giving him breathing treatments so he has stayed home with Rachel and me today. He tries to run around and play with spaceships but then he gets tired and just plops down on the couch to rest. That's not like Nicholas at all! Hope the little guy gets better soon.

I had a chance to go through some things that were sent home from school recently. He goes to art class once a week and usually does some nice work. But you know Nicholas. He's the first to admit that he'd rather run and jump than sit still at a table doing art work so often times he brings home some scribbly work. So when I saw some of the drawings that he's done recently I actually had to ask him about them just to be sure they were really his. He drew these by looking at a picture that the teacher had drawn on the board. I'm impressed - mostly because I can actually tell what the things are supposed to be! You'll note that his painting work is still rushed just to get it done but I really like the drawings. They are actually kind of cute. 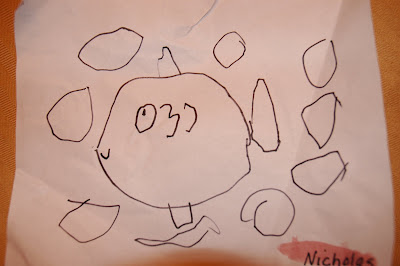 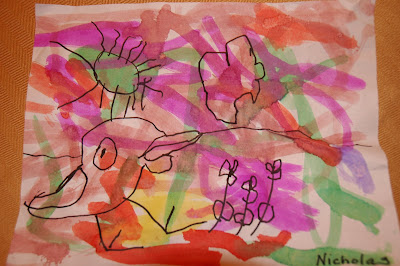 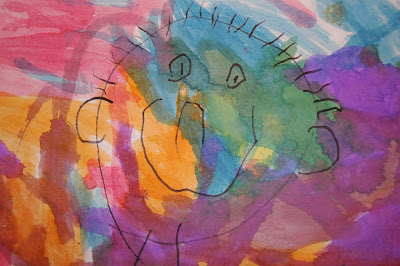 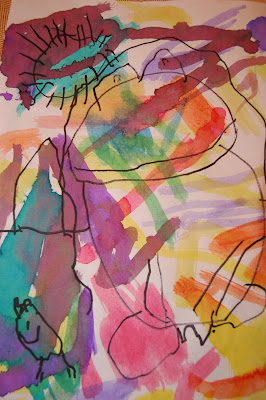 at February 26, 2009
Email ThisBlogThis!Share to TwitterShare to FacebookShare to Pinterest