Every February 2nd there's an event in Punxsutawney, Pennsylvania that attracts the attention of people from all over the world. The early morning event is centered around a groundhog named Punxsutawney Phil, who forecasts how much more winter weather there will be. If Phil sees his shadow on Gobbler's Knob, it means six more weeks of winter.

Taken from the website of Punxsutawney Phil, the official Groundhog:

Hear Ye, Hear Ye - On Gobbler's Knob this glorious Groundhog Day, February 2nd, 2009, Punxsutawney Phil, Seer of Seers, Prognosticator of all Prognosticators, awoke to the call of President Bill Cooper and greeted his handlers, Ben Hughes and John Griffiths. After casting a joyful eye towards thousands of his faithful followers,Phil proclaimed that his beloved Pittsburgh Steelers were World Champions one more time and a bright sky above me showed my shadow beside me. So 6 more weeks of winter it will be.

Well, the groundhog saw his shadow today so we'll have 6 more weeks of winter. I talked to Nicholas a lot about Groundhog Day. I started off the conversation telling him about hibernation and how a groundhog sleeps underground during the winter. Always inquiring, Nicholas asked, "But how does the groundhog know when winter is over and spring is here?" Wow, thanks for the perfect lead-in to the next thing I was going to talk about. I couldn't have planned a better transition myself. So we talked about Punxsutawney Phil looking for his shadow; we talked about what makes a shadow; we talked about the seasons, particularly winter and spring; and Nicholas talked about how much he likes to eat snow in the winter (of course, you know this already if you've ever seen pictures of Nicholas in the snow because most of the snow pictures I have of him involve him licking snow, catching snow on his tongue, or shoveling a big snowball into his mouth.)

Nicholas and I decided to make some groundhog cupcakes. Yes, I admit that I will look for any excuse to eat chocolate cake! Nicholas helped me make a batch of chocolate cupcakes and he got the special job of licking the whisk when we were done. Good job, little buddy! 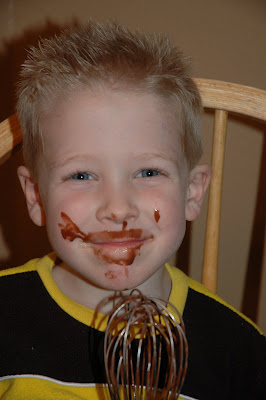 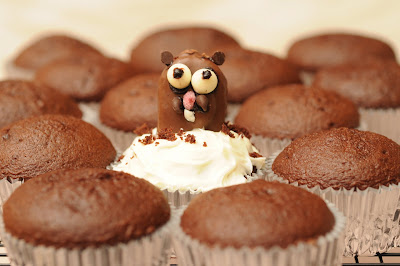 Since Groundhog Day is all about shadows, we decided to do some experiments with to see how shadows might change depending on the time of day and location of the sun. I explained how shadows in the middle of the day are most accurate and how they get longer later in the afternoon because of the angle of the sun. We started our experiment at 12:30 and drew Nicholas' shadow on the driveway with sidewalk chalk. 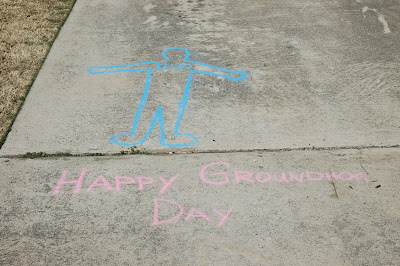 Then we drew it again at 2:30 and again at 4:30. Each time, Nicholas was standing in the same spot with his arms out to his side. Nicholas said, "WOW!" when he saw how different his 4:30 shadow looked. You can't even tell that it is a person and it is about three times as long as the 12:30 shadow. 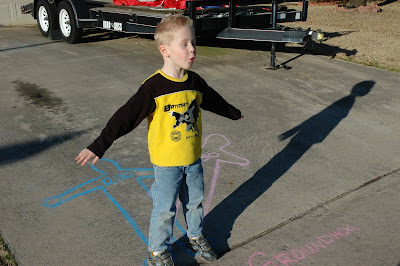 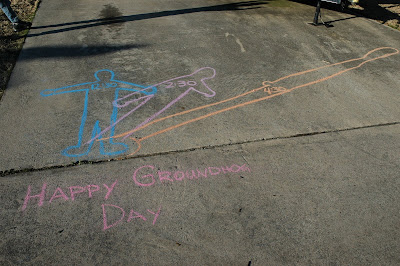 During dinner, I had a small plate with three groundhog cupcakes sitting on the table. The groundhogs were just happy as could be watching us eat dinner. 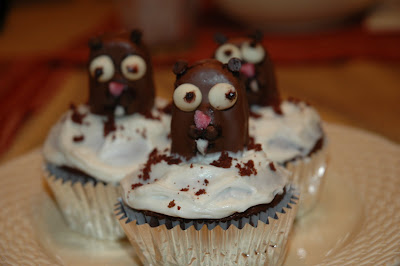 However, as soon as Stuart finished eating dinner, I happened to look over at the plate and noticed that one of the groundhogs was gone. Stuart had a funny grin and was chewing on something then he said that the groundhog must have disappeared back into his hole. I guess he really did because he was no where to be found! 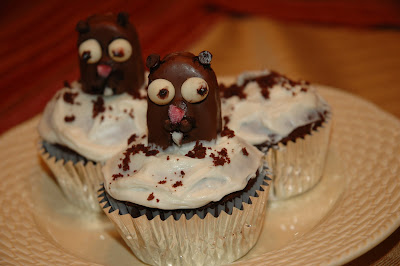 I had tons of chocolate cupcakes left over so I went ahead and decorated the whole batch and we'll bring them to school with Nicholas in the morning for all of his classmates to enjoy. Here's our little groundhog army, all ready to go. 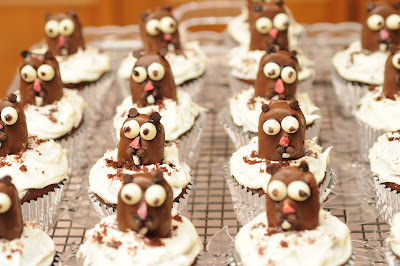 at February 03, 2009
Email ThisBlogThis!Share to TwitterShare to FacebookShare to Pinterest