The Grand Canyon at Sunset

We even called the Visitor Center and asked, "If we are screeching into the parking lot just in time to see the Canyon at sunset where would be the quickest point to get to and still see an amazing view?"  I had wanted to see the sunset from Hopi Point or Yavapai Point but from what I had read those two areas get really crowded at sunset and I knew that some areas are only accessible by shuttle bus or walking and we just didn't have much time.  There is about 30 miles of stops along the South Rim of the Grand Canyon so there were plenty of other options to see the sun hit the Canyon.  We followed the park ranger's advice and went to Mather Point.

We got there just in time to see the sun hitting the rocks of the Canyon at sunset! 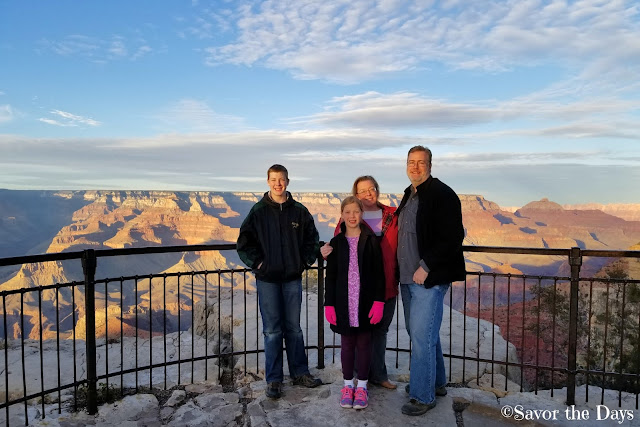 While most sunset pictures are taken of the sun going down on the horizon, at the Grand Canyon you actually want to point your camera AWAY from the sun and see the sharp contrasts and golden colors as the sun reflects on the giant rocks.  What a beautiful sight to see! 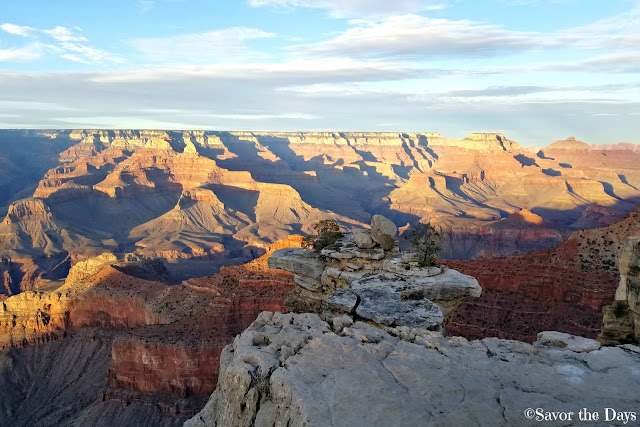 My sweetie and me at the Grand Canyon! 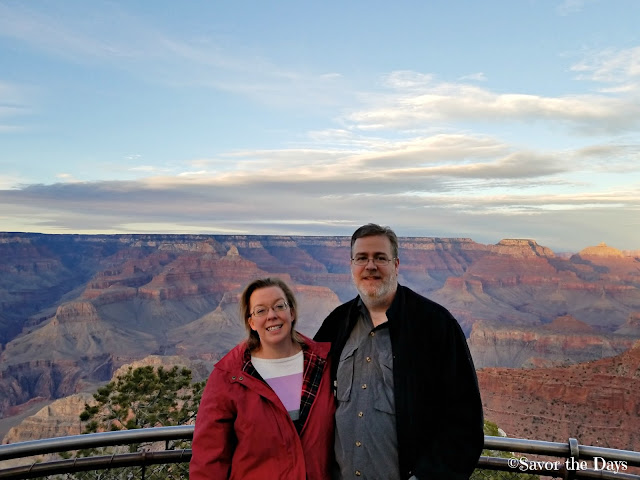 The last bit of sunset on the peaks. 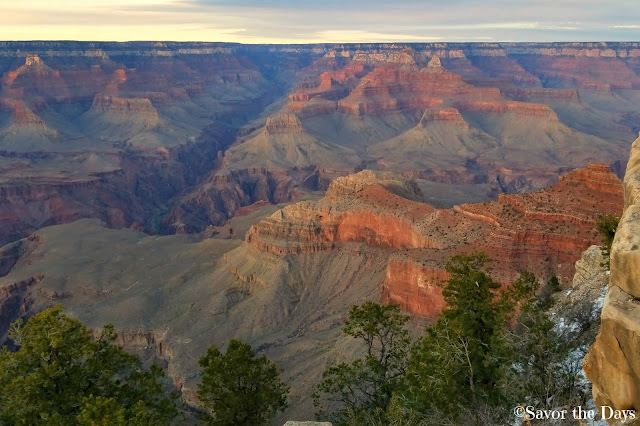 The Grand Canyon has many points that jut out and there are rails for people to venture out safely to take some great pictures.  This was a picture I took looking west from the Mather Point area at what might be Yavapai Point.  I think this would be a great place for sunset or sunrise pictures. 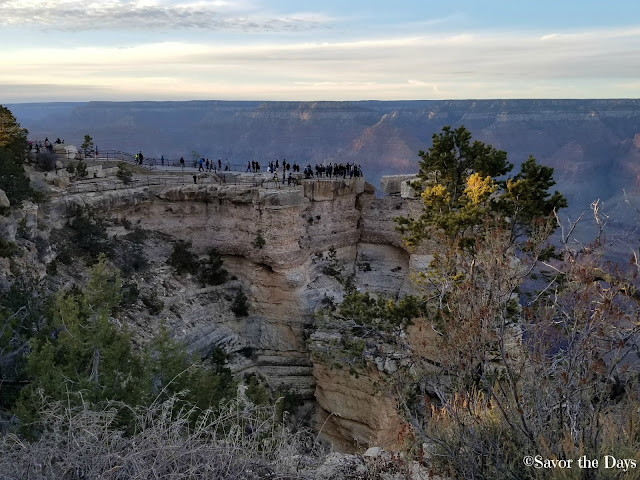 The sunset was starting to fade but there was still a lot of beauty to see in the canyon.  I am amazed by some of the rock formations.  Look at all of the layers in this column.  You may not be able to see it well without clicking on this picture to enlarge it but look at the rocks on the top.  They almost look like they have been placed on the top like some kind of giant Jenga game. 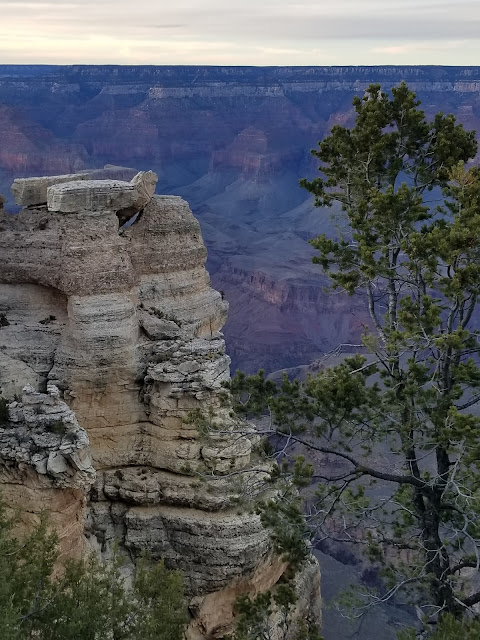 Although this picture is taken facing the east at sunset when the sun was low in the western sky, the sun is reflecting off of the clouds above to give the illusion that the sun is in this picture.  I love the layers of color in this formation and the sprinkles of snow up the side.  It was cold and windy there. 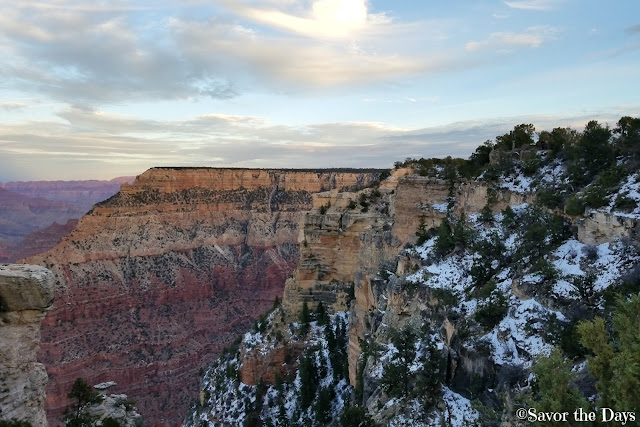 The peaks and crevasses just beckon to be explored.  I would love to be able to hike around down there and explore the wonders of this creation. 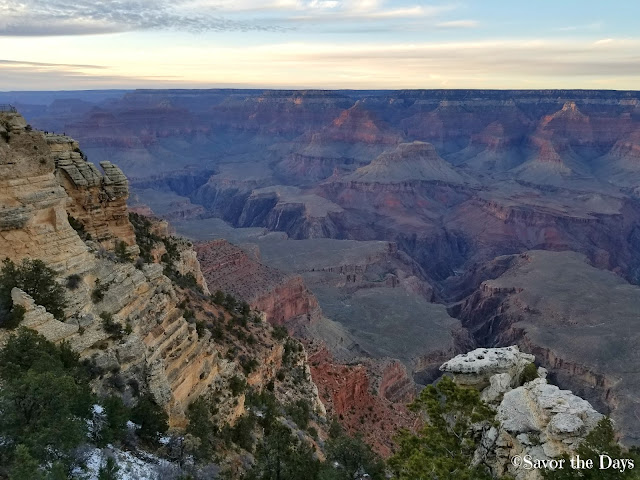 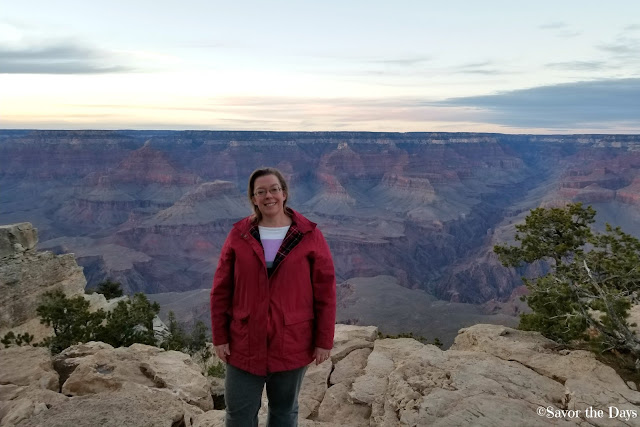 Stuart and the kids were able to explore around a little more than me.  I had not worn shoes worthy of any kind of hiking today but these three were adventurous and made their way to a really cool point.  I was really expecting all of the viewing to be easy going, along concrete paths, and behind railings.  But there was a large number of people who just went around railings and scampered down here and there to get to where ever they wanted to explore.  Wow!  There is a lot of adventure to be had here! 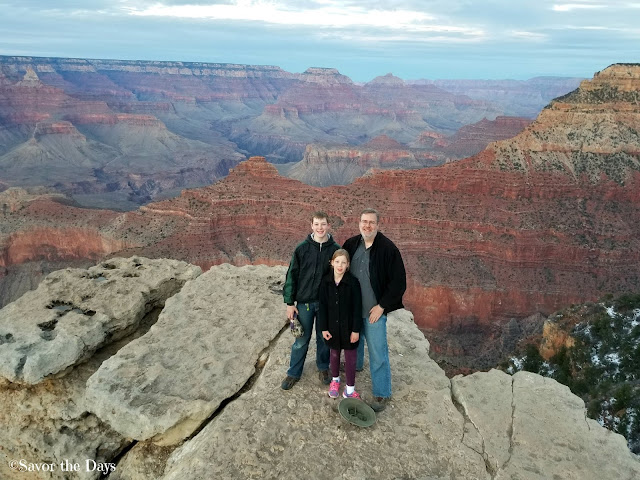 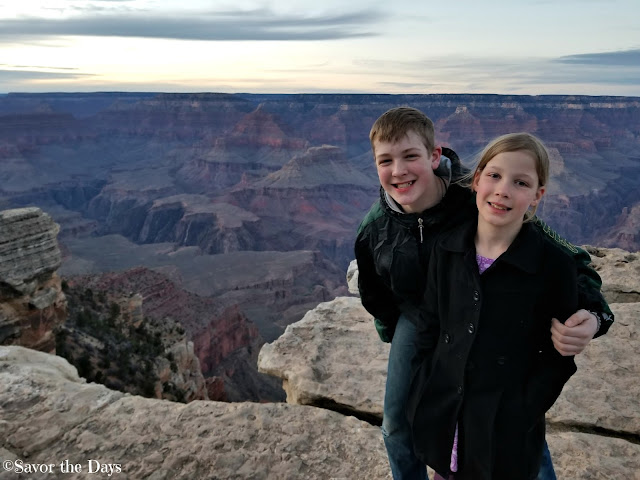 As it got darker we decided to head out and find our hotel.  We had made a reservation yesterday for a hotel in Cameron based on a recommendation.  Unfortunately, it ended up being much farther away from the Grand Canyon than we had realized and it seemed to take forever to get there.  There wasn't many dinner options by the time we arrived to the town at 9:00 but we grabbed some sandwiches and crashed for the night.  I couldn't help but notice that within 10 minutes of being at the hotel, Rachel had already set up her part of the night stand with all of her special things arranged just right. 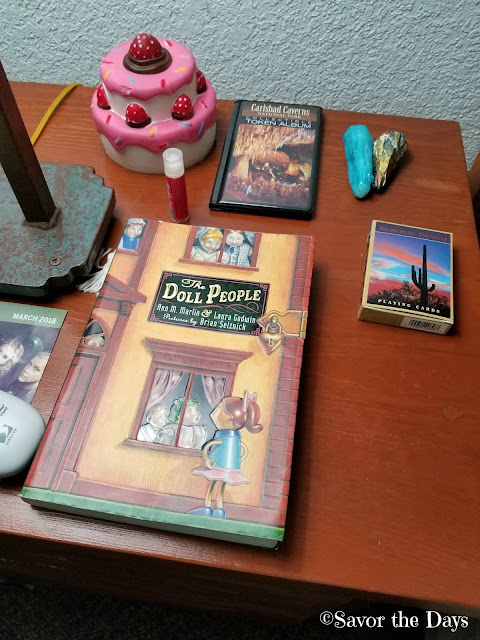 Here giant cake "squishy", lip balm, her National Parks token book (we have been collecting tokens from each National Park), 2 quartz pieces from the Tucson Mineral and Gem World, her current book, and a pack of playing cards from the Sonoran Desert.  She makes me smile with her sweet way of making everything feel special.

We talked about trying to get up early and see the sunrise at the Grand Canyon.  But we were really tired and we just weren't up for getting up that early to try to get breakfast and drive an hour to the Canyon to be there for sunrise.  The Grand Canyon is glorious enough for us as it is and we had already seen it at sunset today.  Tomorrow would just be about exploring it and taking it all in.