On the Road to Arizona

We ended up spending more time at Carlsbad Caverns than we had expected and left mid-afternoon. We were heading to Tuscon, AZ for the night which is an eight hour drive so we had hoped to get on the road a little earlier.  The scenery helped though.  The mountains started getting bigger! 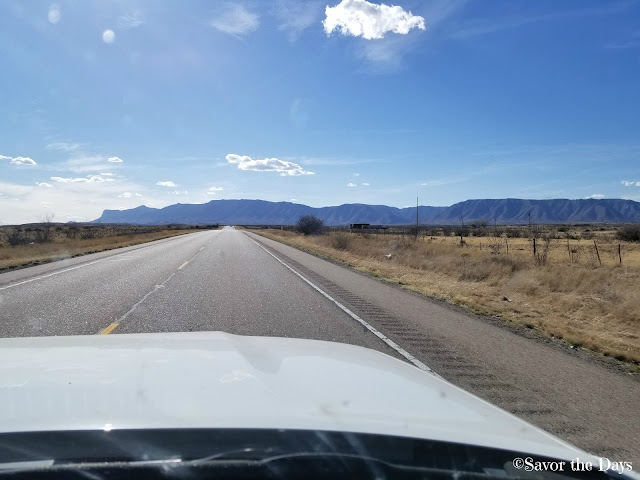 It seems kind of crazy but in order to get from Carlsbad, New Mexico to Tucson, AZ we had to go back into Texas for a bit. 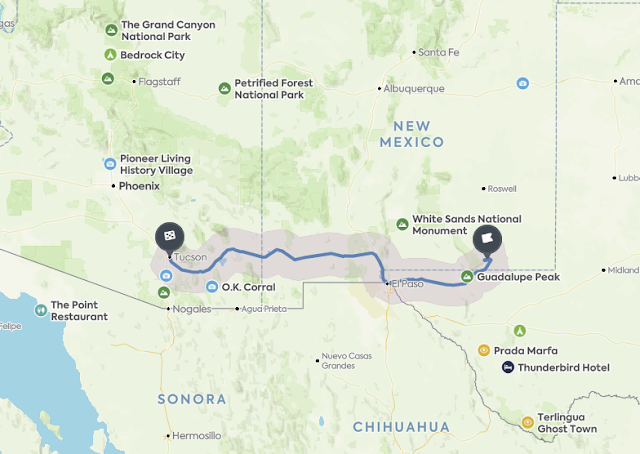 I loved this part of the trip because we got to drive through the Guadalupe Mountains.  They are so pretty.  If we hadn't been looking at arriving in Tucson around 10:30 pm I would have made a plea to stop and take a quick hike just so we could add it to our list of National Parks visited on this trip and made it a total of five.  But Arizona was calling and we had to go.

Random Trivia - Guadalupe Peak is the highest point in Texas at 8751 feet above sea level. 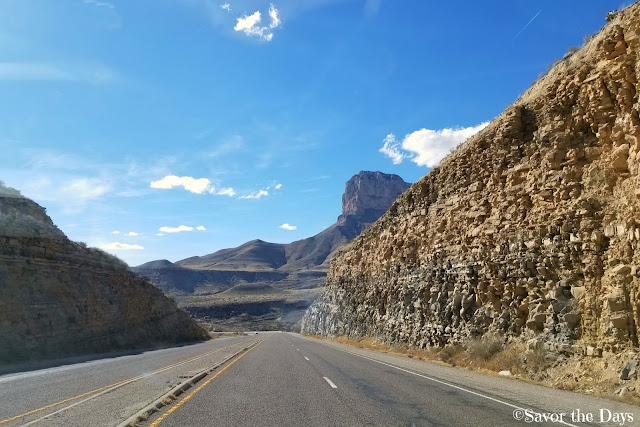 Once we were back in New Mexico, God blessed us with an amazing sunset behind the mountains.  This picture can't do it justice but it was just breath-taking. 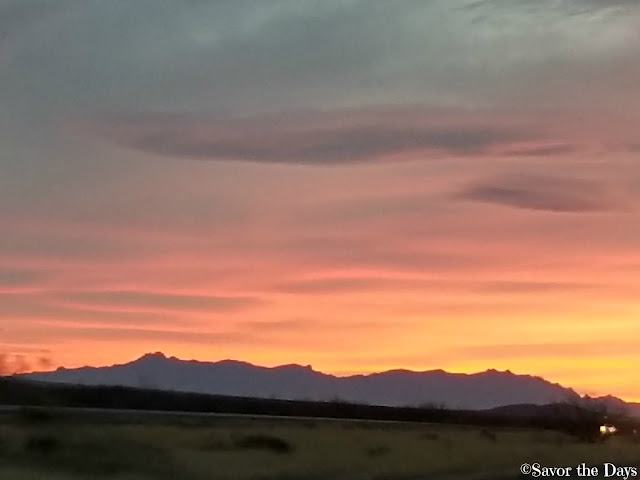 The owner of the bed and breakfast we were going to had suggested that we try to arrive before dark because it is a little hard to find and GPS is useless in that area.  Unfortunately we got in around 10:30 that night but he said to call him when we got near and he would meet us at a main road and let us follow him back.  We are so grateful that he did that because after following him in we saw what he meant.  The property was far off the main road and it could be confusing to find on your first trip there.

Since it was dark when we arrived we really didn't get a feel for the property.  But first thing in the morning we went outside our door and saw this!  The bed and breakfast is actually in the Sonoran Desert!! 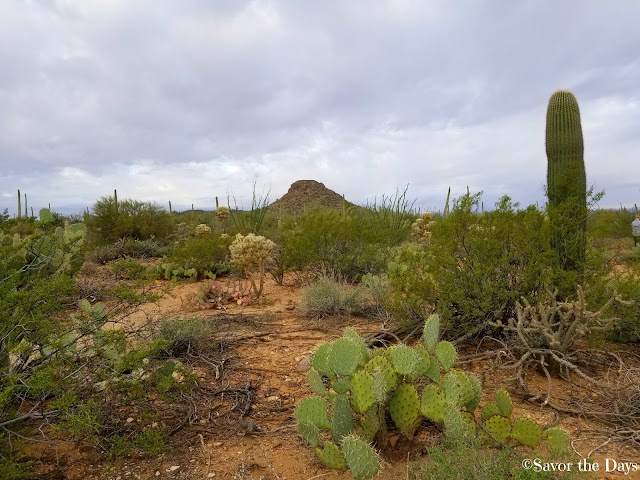 I know the desert habitat might look ugly and unappealing to some.  However, we love all kinds of nature and this habitat was just beckoning us to learn all about its unique and incredible plants and animals.

Rachel discovered a Teddy Bear Choya cactus.  This prickly plant gets its name from the fact that it looks fuzzy like a teddy bear. 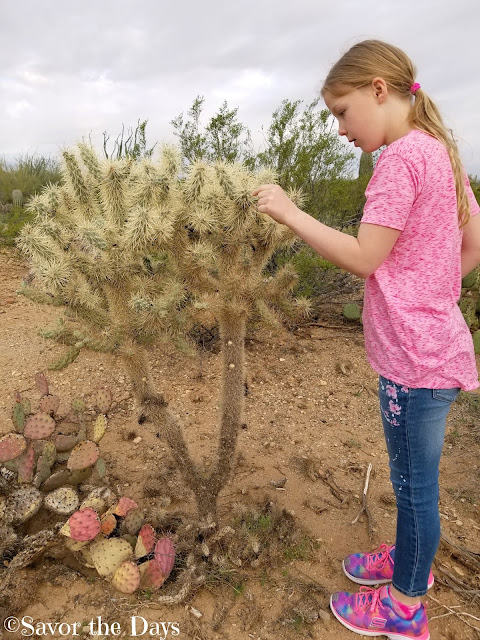 But she quickly learned that it isn't fuzzy at all and those spines get stuck in your skin pretty easily.  I was proud of her for staying calm.  She just removed the spine from her finger and went back to exploring. 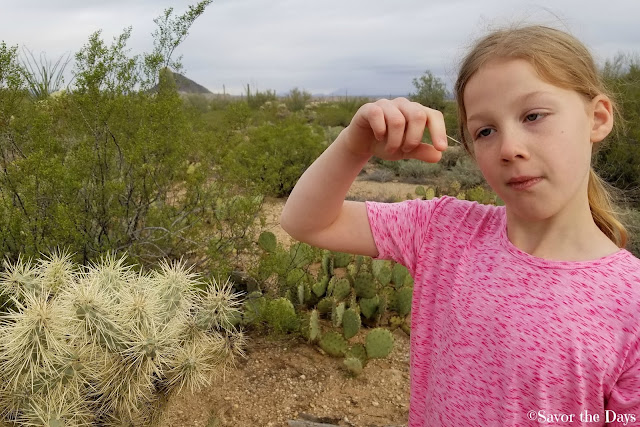 We had walked around the property for a bit when suddenly we looked up and realized that there was a saguaro cactus right there outside our room.  It is so tall that we hadn't even noticed it among the other trees. 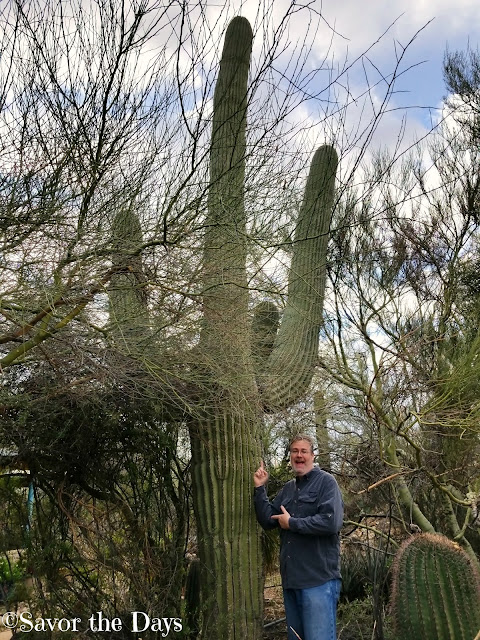 Eventually we headed into the main house for breakfast with the other guests.  We were first served coffee, juice, yogurt with fruit, and some delicious homemade fruit and nut bread.  As we all talked and got to know each other, Mike and Wayan worked on making french toast topped with fruit. 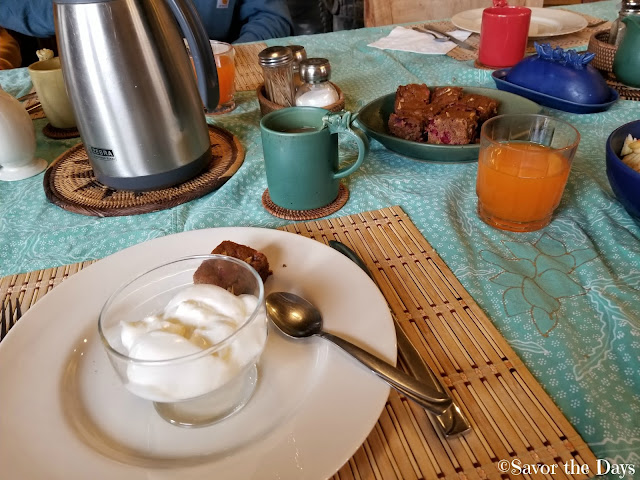 After breakfast we looked around the property some more.  Nicholas enjoyed watching the Gambel's Quail and he caught this video below.

Eventually a coyote slinked up looking for some breakfast scraps.  What a beautiful animal. 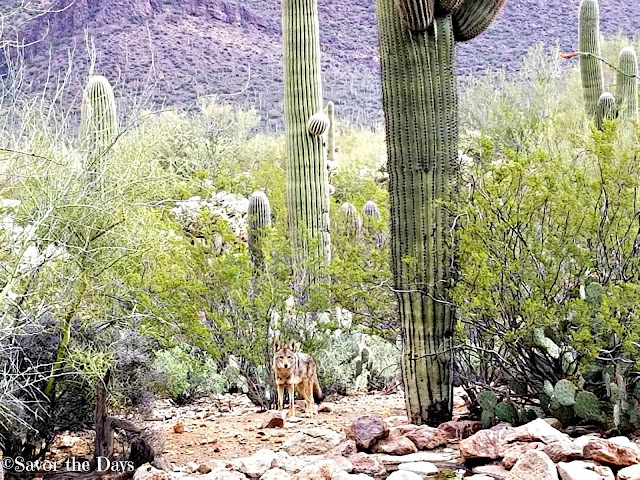 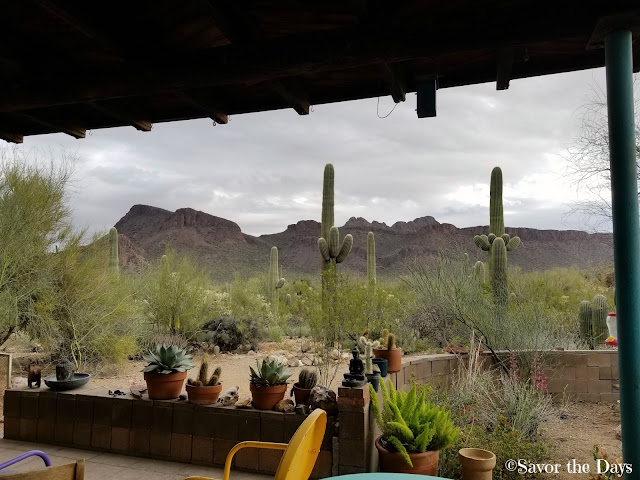 I'm not sure of the names of all the cactus we saw on this trip but the one below might be an organ pipe cactus or a pencil cactus.  I couldn't find an exact match in my field guides. 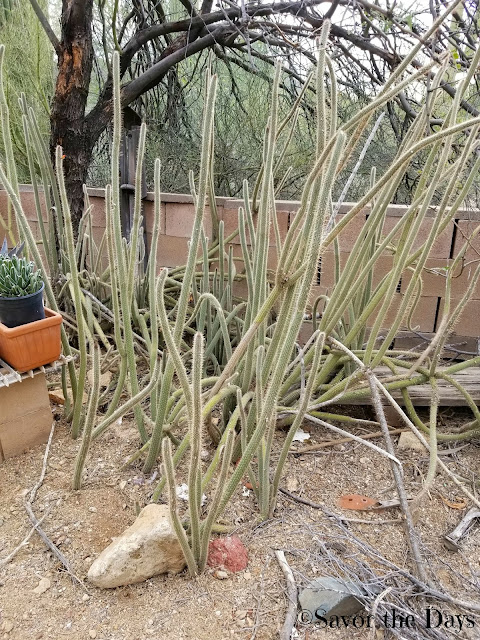 This one seems to be shaped like a prickly pear cactus but it has longer and many more spines than I've ever seen on a prickly pear.  I think it is called a plains prickly pear also known as a hairspine cactus. 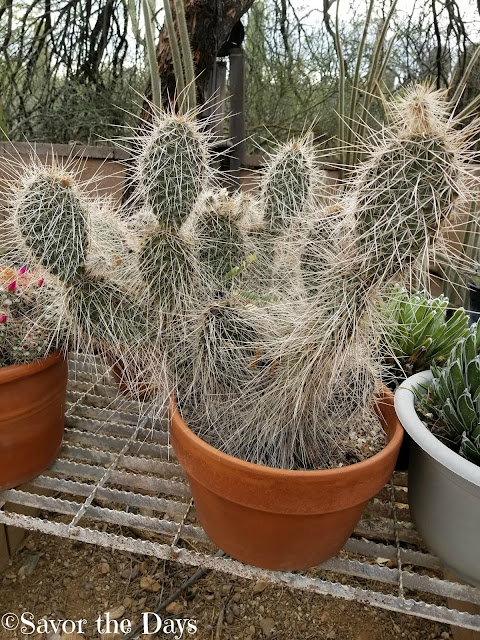 This cactus is a barrel cactus with beautiful golden spines. 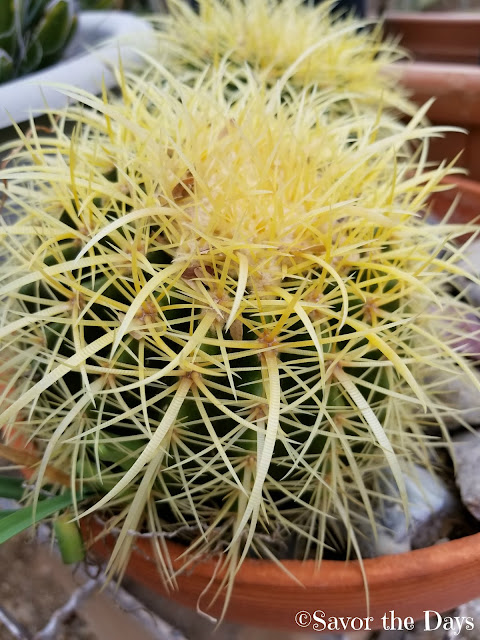 I don't know what this cactus is but it is so striking.  The purple and green flesh against the bright white spines.  And just look at those spines! 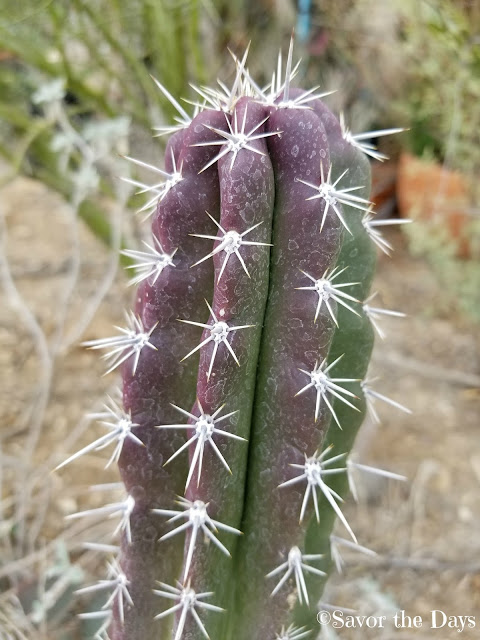 I think the cactus below is called Old Man Cactus.  It looks like it is covered in soft white hair.  There are still plenty of spines sticking out of that soft exterior so Rachel was careful to just touch a soft spot.  She is so curious that even a pokey cactus can't stop her. 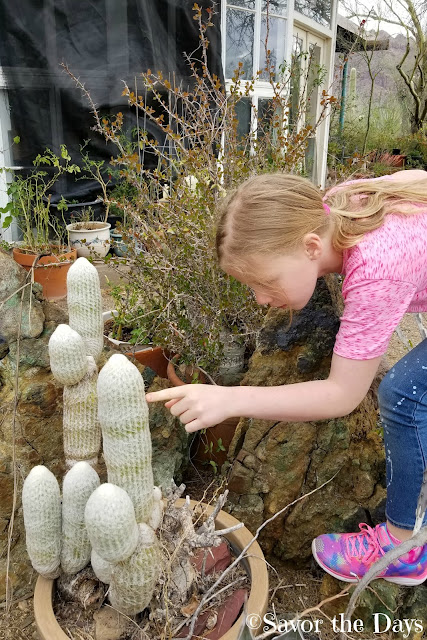 One of my favorites, the prickly pear.  Also known as the state plant of Texas. 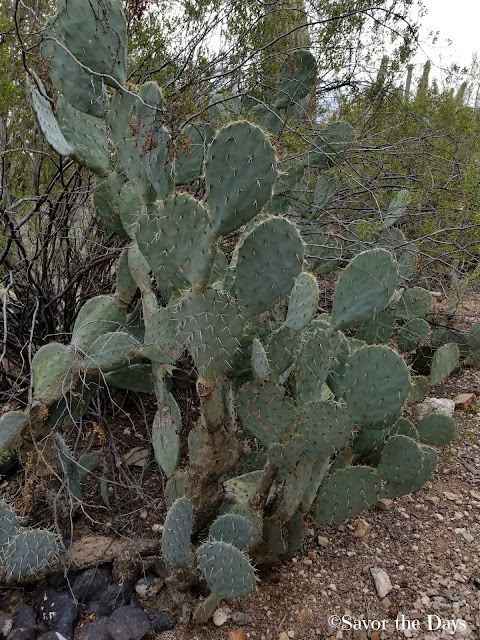 Rachel found a prickly pear that had some damage on it but she said it looked like a sideways heart so she asked me to take a picture of it. 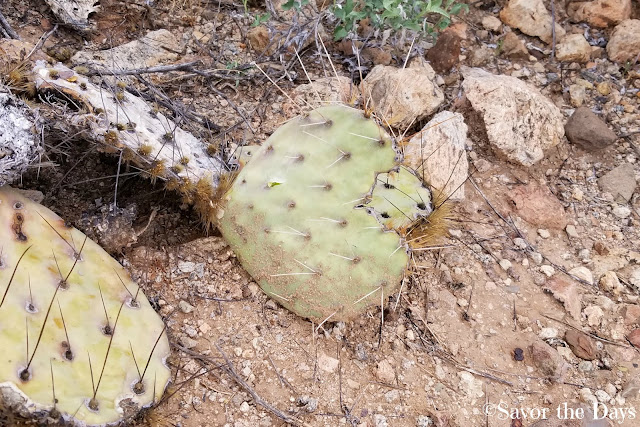 Rachel made a small collection of random broken cactus pieces that she found on the ground and put them on a table outside our room.  I love to see how fascinated she is with these unusual plants even though they aren't flowery and pretty like she usually likes. 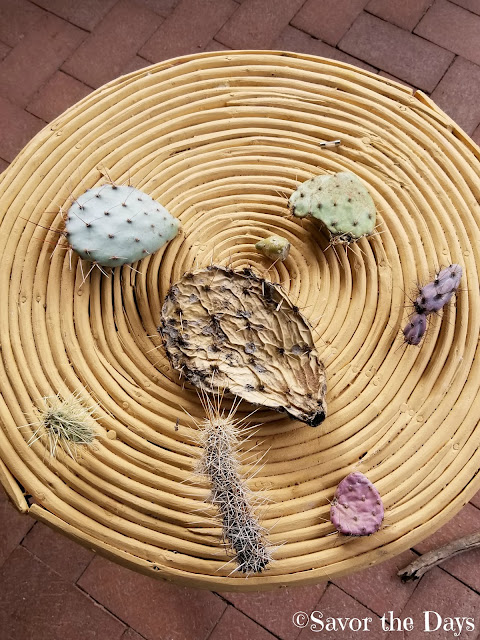 Speaking of collections, there was a small rock collection that someone else had put on one of the short patio walls.  I was drawn to the layers of this one.  Isn't that just beautiful?  I'm sure we will see some neat rocks in the Sonoran Desert but this just makes me look forward even more to the amazing rocks we will see when we reach the Grand Canyon! 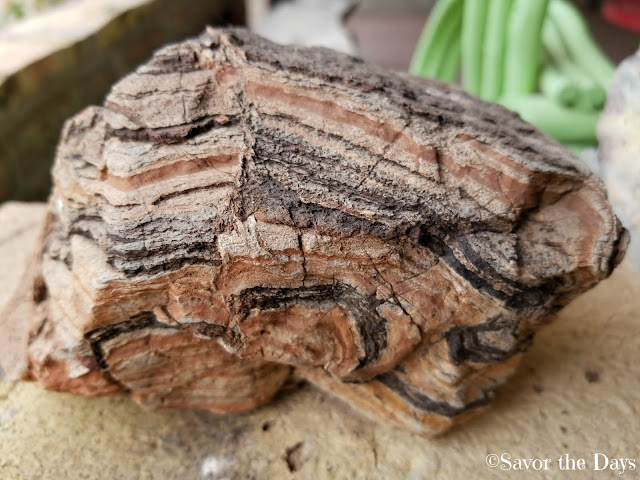