We left Pimentel and Sons and found our way to the Turquoise Museum.  I love turquoise so I was pretty excited about this stop.  Unfortunately when we got there we saw a sign on the door that said they were closed for a private event and wouldn't open until later in the afternoon.  We would already be on the road out of town by then so we missed getting to see it.

Next on our list was the American International Rattlesnake Museum.  This was mostly for Nicholas but we were all at least a little bit interested because this museum has the largest collection of live rattlesnakes in the world. 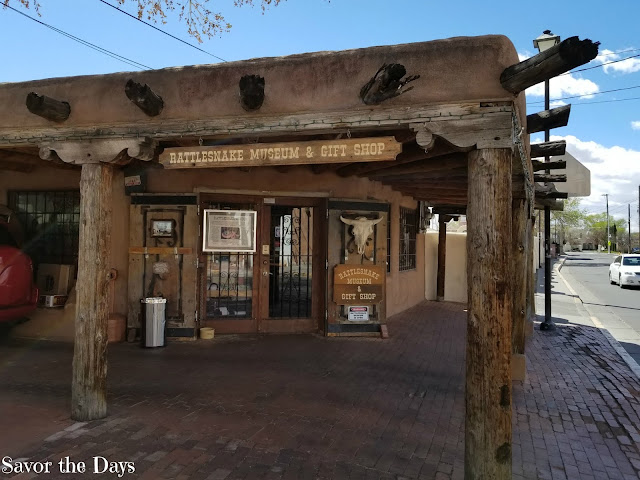 We arrived a little before the museum opened but we were entertained by two beautiful rescued African Spurred Tortoises in a stock tank outside.  This is the third largest tortoise species in the world. 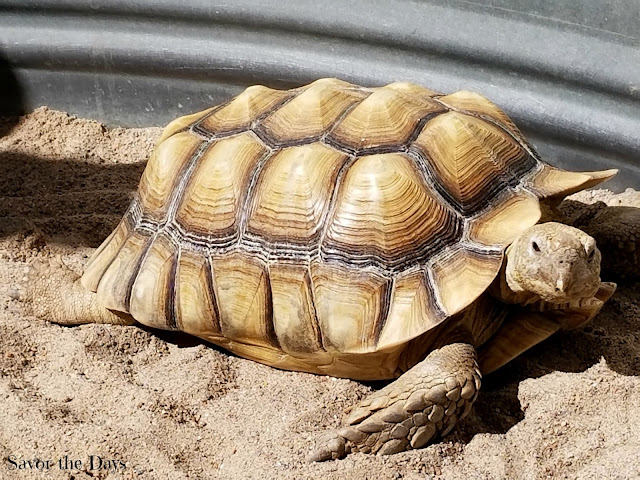 The gift shop has a lot of great souvenirs.  Both of my children bought their own authentic rattlesnake fang to bring home with them.  They are small but very sharp looking.  I cringe at the thought of that piercing my skin. 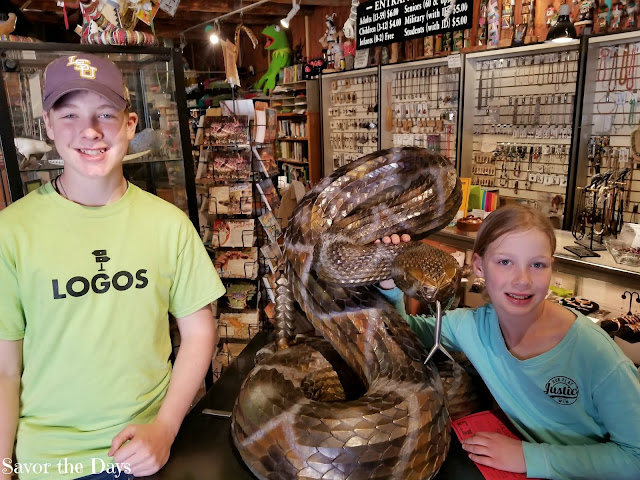 Before I show you around the museum, did you know that all rattlesnackes are born live?  Vipers and boas also have live births.  They do not hatch from eggs like other snakes.

Here is a Mottled Rock Rattlesnake.  It lives in the dry rocky lands of Mexico, New Mexico, and Texas so its mottled dull colors help it to camouflage with the rocks around it. 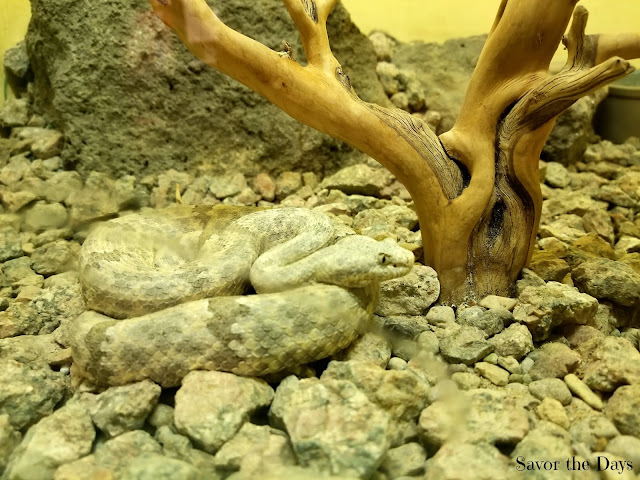 This guy below is a Royal Python or Ball Python.  He is called a Ball Python because if he gets scared, he will roll up into a ball shape and just roll away!  I would have liked to have seen him do this but I guess he is used to big human faces staring at him all day long.  Ball Pythons are non-venomous and they usually doesn't bite at all but they are constrictors.  These snakes live in Africa.  Their coloring is usually dark brown or black with tan markings. 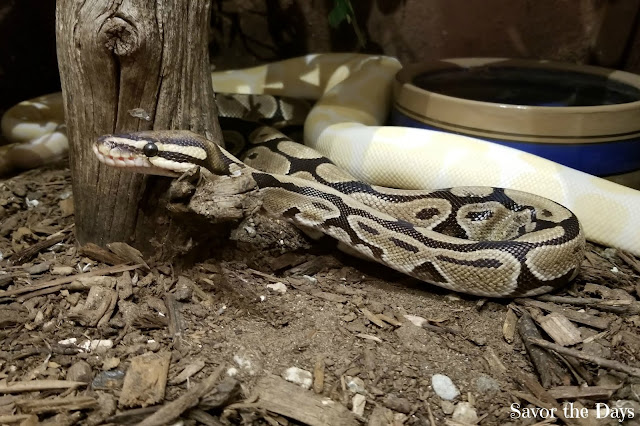 There are more than just rattlesnakes in the museum.  I was fascinated to see this platypus skeleton.  Did you know that a platypus is venomous?  Yes it is!  It has venom glands connected to spurs on his hind feet. 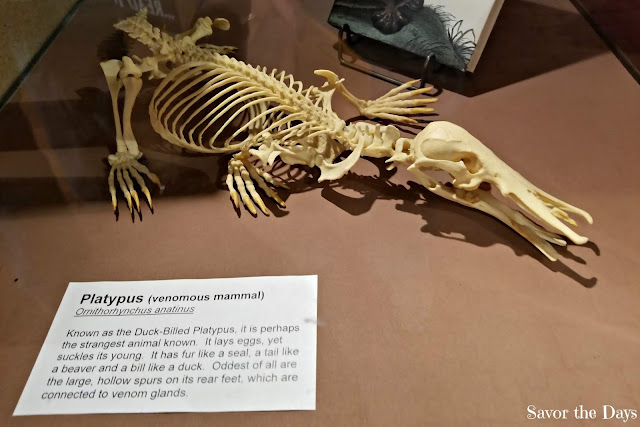 Now this guy was one that Nicholas had hoped to find in the wild while we were hiking in the Sonoran Desert.  The Gila Monster!  It is the only venomous lizard in the United States. 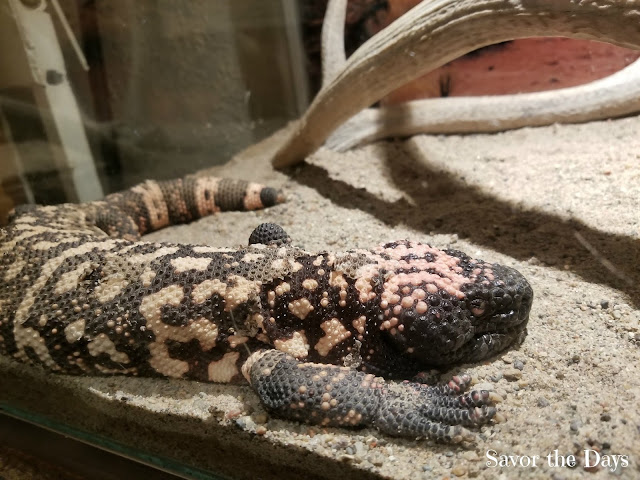 Why would Nicholas want to encounter a Gila Monster in the desert?  Because he has seen Coyote Peterson find them there.  Check out Coyote's video below:


What I find really crazy though it that Nicholas has probably also seen the video below of the time that Coyote was bitten by a Gila Monster yet he still wanted to catch one on his own!


This next guy looks scary but he is harmless to humans.  He is a Vinegaroon or Whip Scorpion.  He is an arachnid but he doesn't have fangs like a spider or a stinger like a scorpion.  He doesn't contain any venom at all.  However, when he gets scared he will spray a vinegar-like substances to scare away the threat. 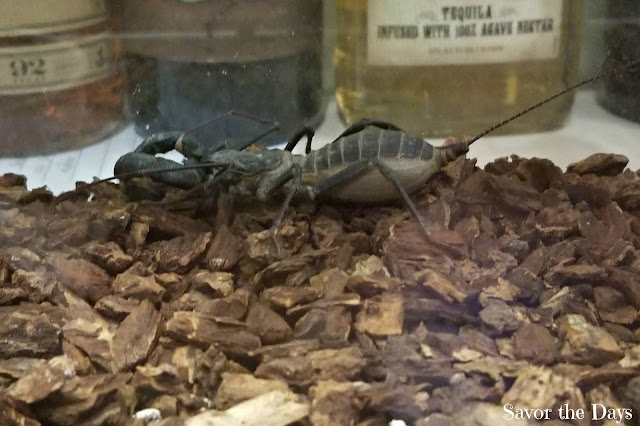 There are lots of unique historical snake items throughout the museum like the old sewing machine that looks like a snake and these antique bottles of snake oil and snake liniment. 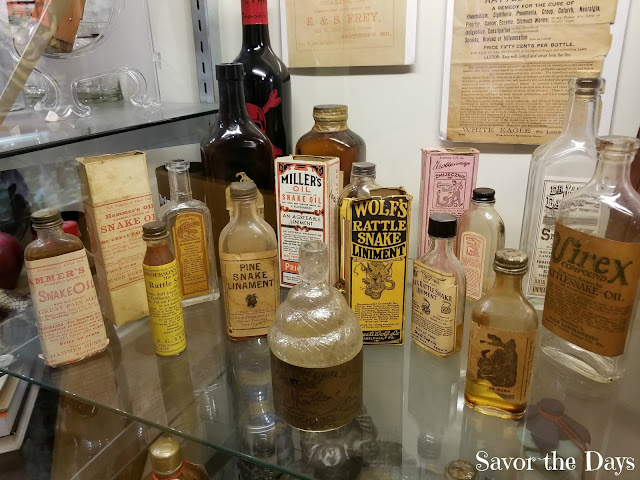 Nicholas loves catching lizards and this display of 14 species of horned lizards was interesting to all of us. 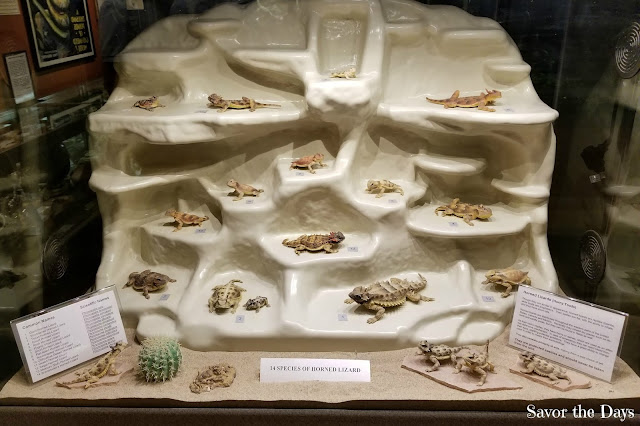 The last room in the museum has a seating area and a movie about snakes.  It also has the most snakes on display.  Nicholas was quite happy here. 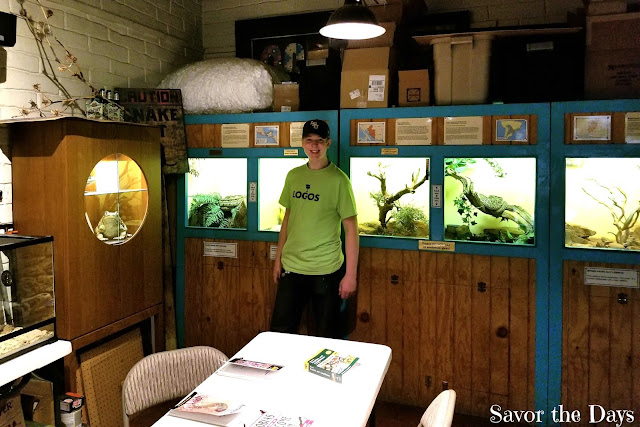 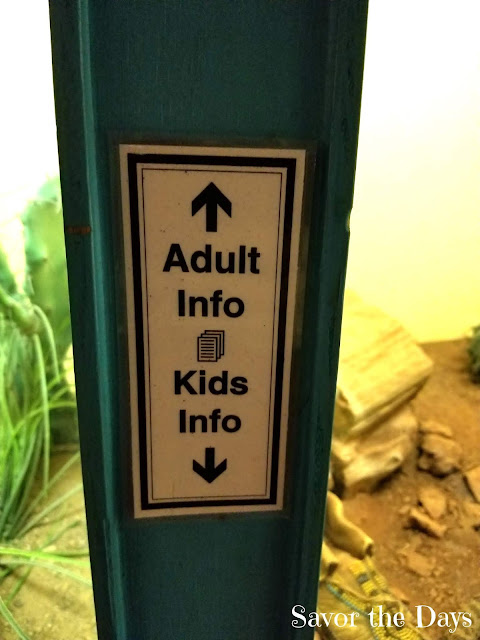 At the bottom of the display there was a card with the common name of the snake and a simple description of it.  It was down low so that small children would be able to read it. 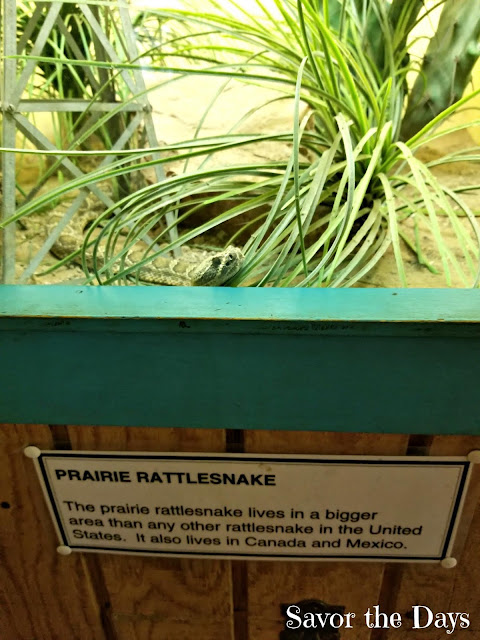 Then above the display was more detailed information for adults and a map of where they could be found. 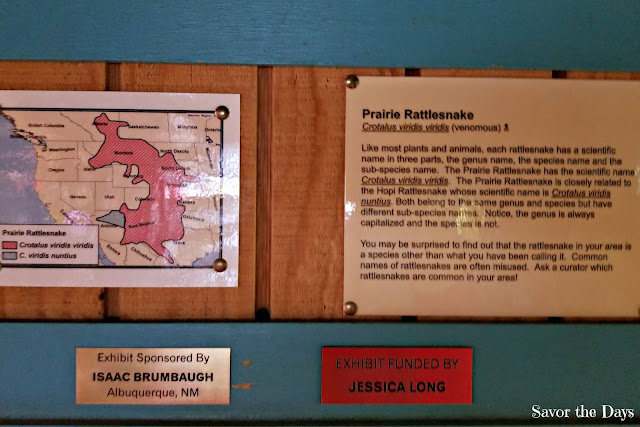 Ok, back to the snakes.  Snakes are not aggressive unless they feel threatened.  If you don't get too close to it, it will likely just slither away from you. 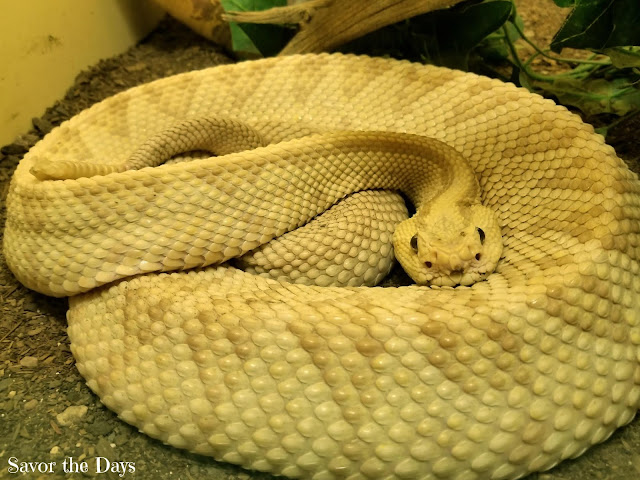 This is the Costa Rican Rattlesnake.  He is found in South America and Mexico on the grasslands and savanna.  He is a pit viper which means he has a pit near each nostril that he uses to sense slight temperature changes which helps him locate his prey.  He has a neurotoxic venom.  He typically grows to about 3-6 feet. 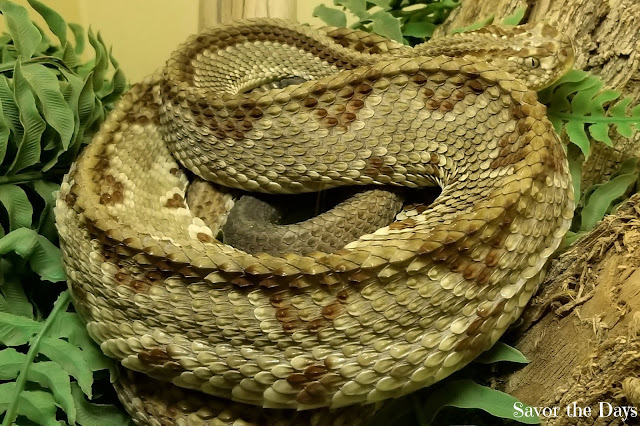 Rachel and I spent some time looking at this next snake, the Western Diamondback Rattlesnake. 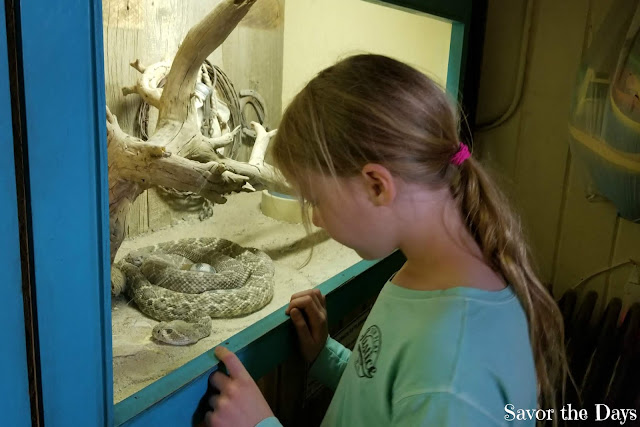 The Western Diamondback Rattlesnake is a pit viper. 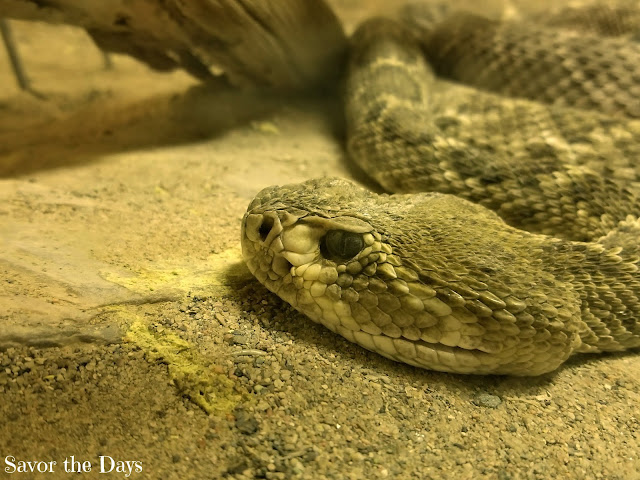 It has a dark diamond pattern on his back and a triangular head.  There are black bands at the end of his body just before the rattle.  I didn't notice until Rachel pointed it out but you are actually looking at two snakes here.  Can you see the head of the second snake? 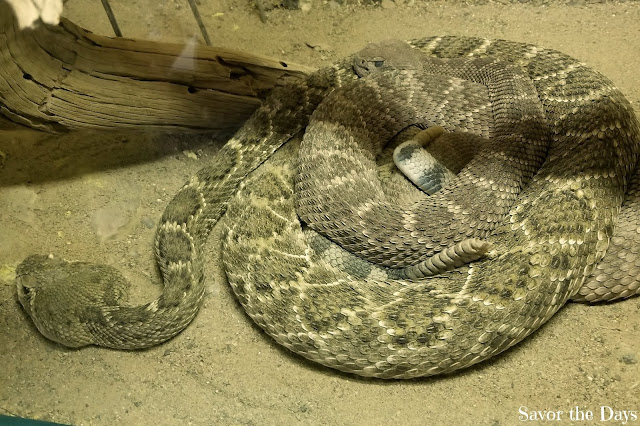 Most people think that a snake that is shaking its rattler is being aggressive.  However, in reality, the rattler is a sign that the snake is afraid and he is just trying to scare away whatever he feels is threatening him.  They can move their rattle up to 60 times per second! 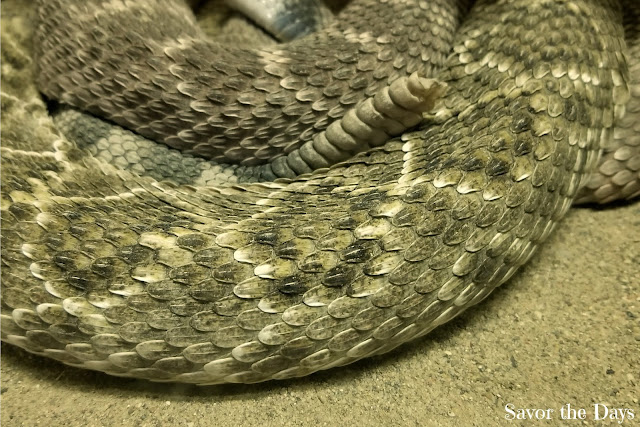