Route 66: Standin' on a Corner in Winslow, Arizona 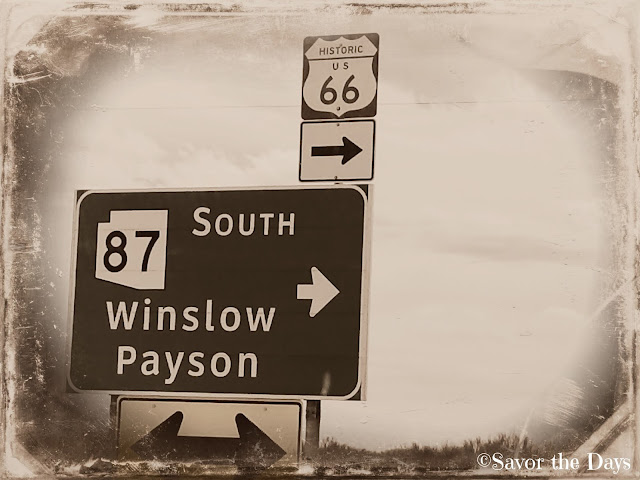 We left Meteor Crater and traveled east on I-40.  Much of the old Route 66 has been replaced by the faster moving I-40 but there are lots of places along the way where you can find the old Route 66 running alongside it, complete with historical old buildings from when it was a major thoroughfare.  I was surprised that there wasn't more signage highlighting Route 66.  You just had to look for the little "Historic U.S. 66" signs on top of the bright green travel signs in order to know where to go.

As we were traveling on I-40 near Winslow, Stuart and I commented about a giant billboard we saw for a place selling knives.  Nicholas popped his head up from his book and saw the sign too.  He loves collecting knives so he begged us to stop.  I'm so glad we did. 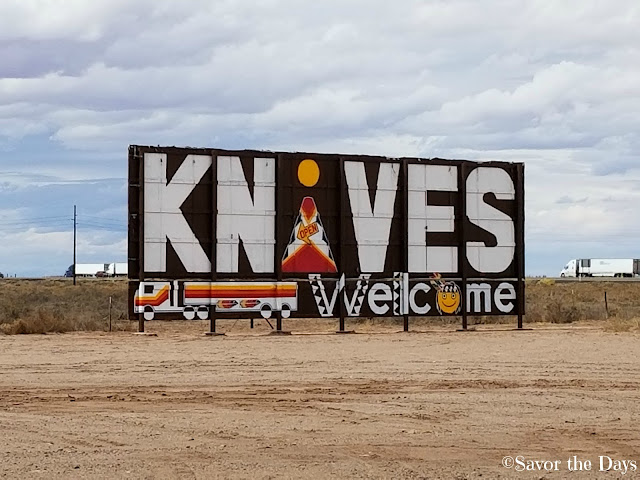 This is where the sign led us.  They also had some beautiful jewelry, blankets and pottery.   They had some very nice knives but they cost more than Nicholas wanted to spend. 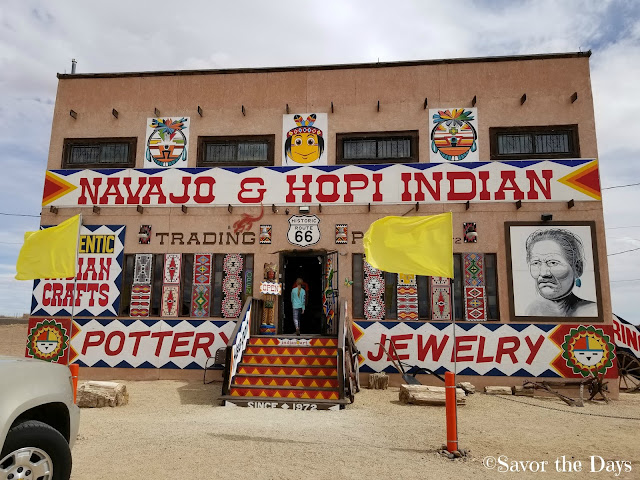 As it turns out, I was the only one who left with anything.  Stuart bought me these handcrafted copper earrings and bracelet!!! 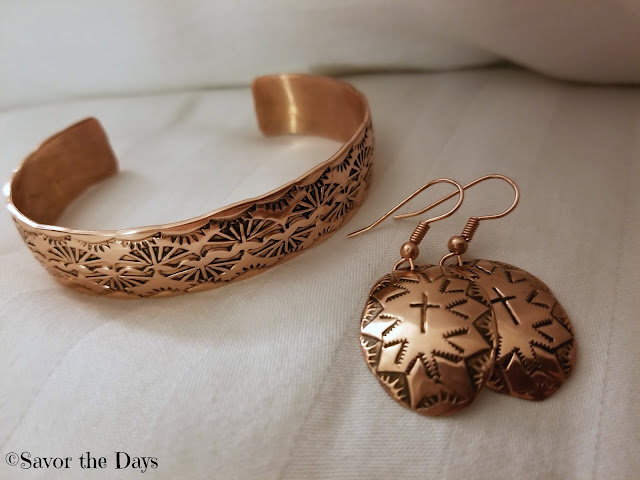 From here we headed to the old Route 66 towards Winslow, AZ.  It is a small town of less than 10,000 people but it is a major tourist stop on Route 66. 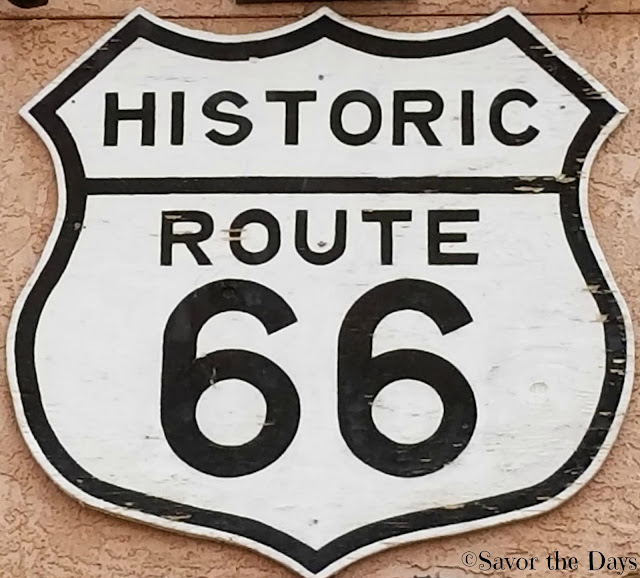 You may have heard about Winslow, Arizona from the 1972 Eagles song, "Take It Easy".  The lyrics that made this little town famous are:


"Well, I'm standing on a cornerin Winslow, Arizonasuch a fine sight to see.It's a girl, my Lord,in a flatbed Ford
slowin' down to take a look at me." 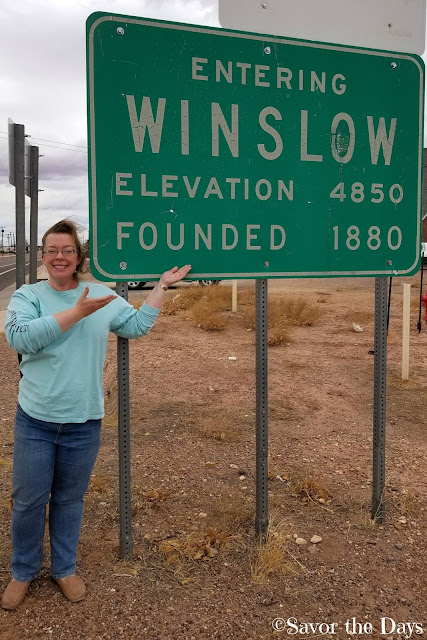 Winslow was a thriving town back when Route 66 was known as "The Mother Road" guiding travelers across the country.  But when Interstate 40 was built just a few miles away, the town lost visitors and businesses packed up and moved away.  The town still has some neat old buildings from back in the day. 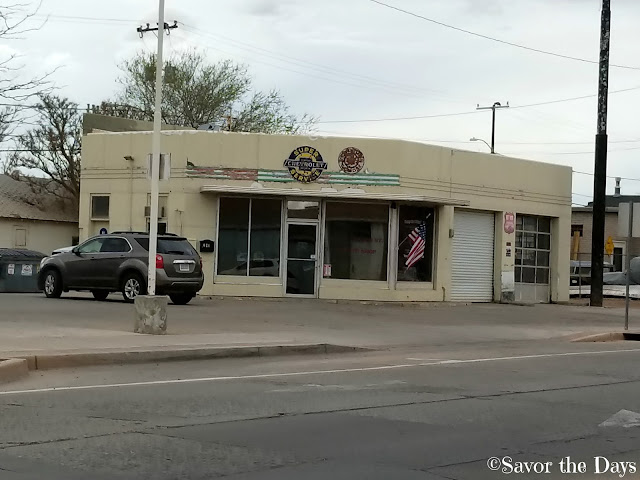 I wish I had more time to walk through the town and take better pictures but we were in a rush to get to one more stop after this and still make it to Albuquerque before midnight so these were drive-by pictures instead of a nice leisurely photo walk like I had planned. 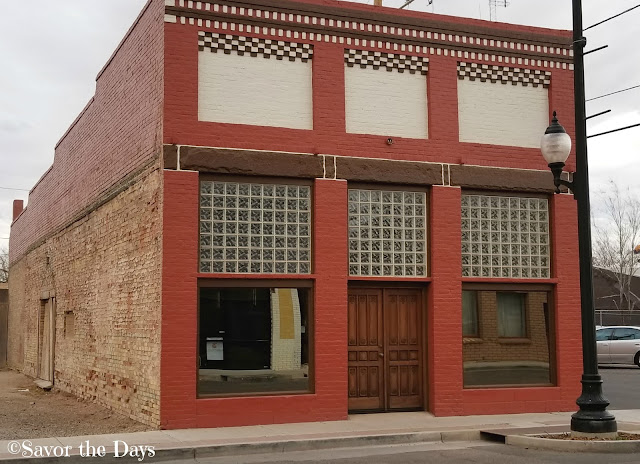 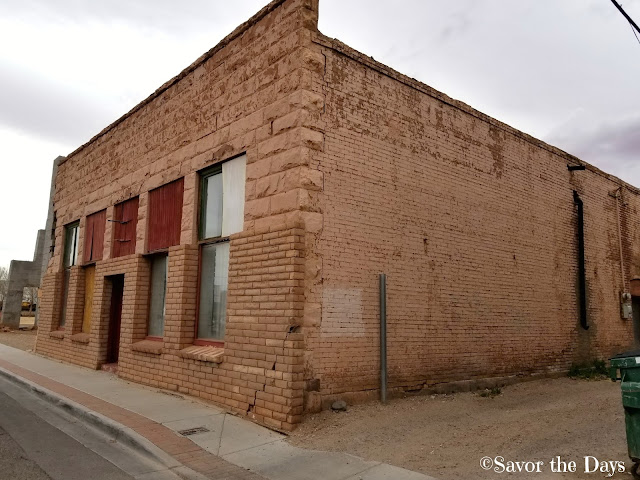 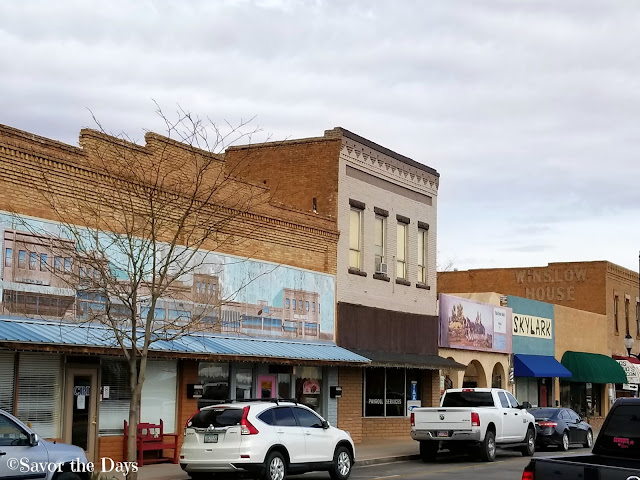 Winslow actually has a Standin' on the Corner park located on the northwest corner of the intersection of Second St. and Kinsley.  It is a must-see photo opportunity if you are exploring Route 66. 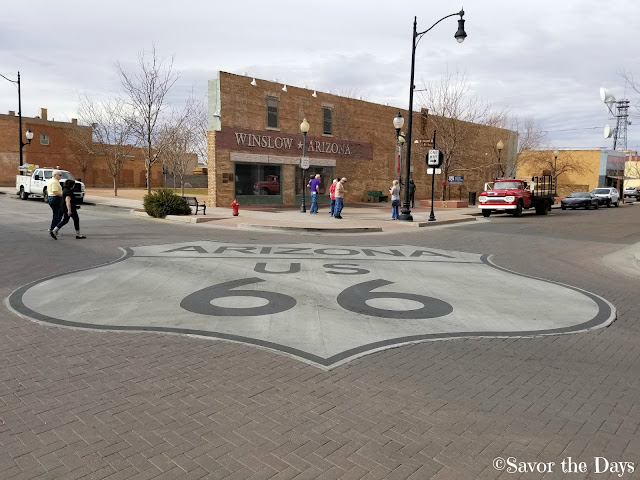 It consists of a wall of bricks complete with windows to peer into, a mural of a girl in a Ford truck painted on a window as if a reflection on the glass of the real Ford permanently parked on the street, and a life size bronze statue of a man with a guitar. 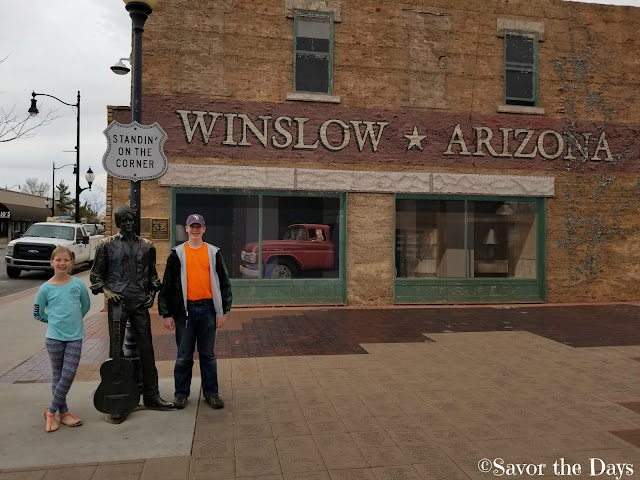 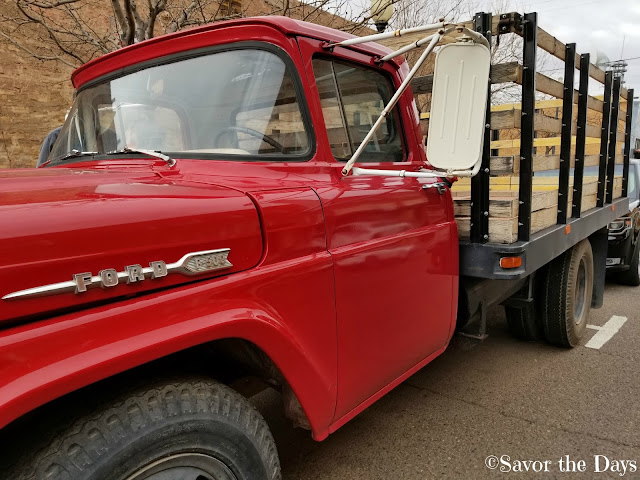 On two of the other corners of the intersection are great gift shops with souvenirs and a lot of town pride. 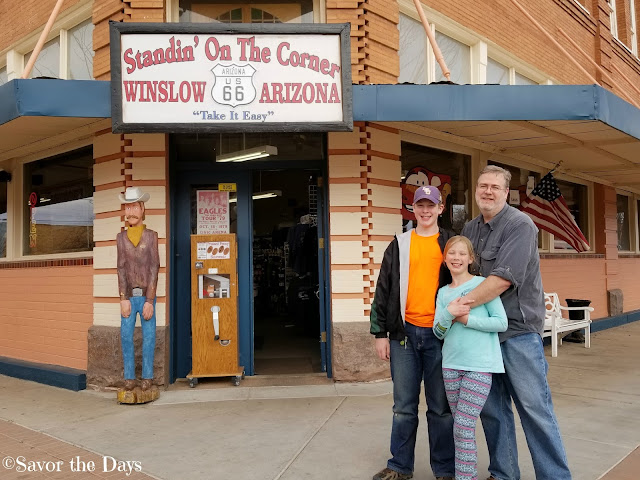 This one even has a painting on their window of the complete Route 66 from Illinois to California.  We will travel through three states on Route 66 before we are done. 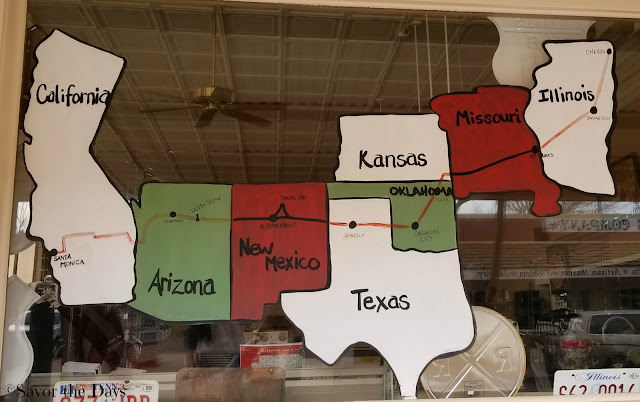 On the fourth corner is the Sipp Shoppe which is a sandwich shop that used to be a bank back in the day. 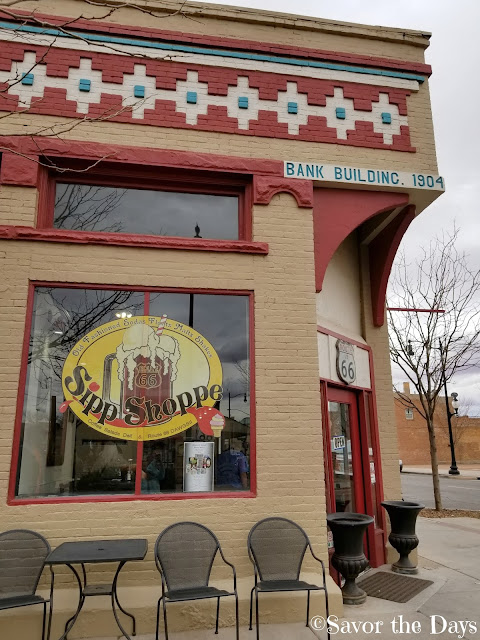 The decor is that of an old fashioned soda fountain shop complete with bar stools at the counter, memorabilia, and black and white pictures of Winslow from a long time ago. 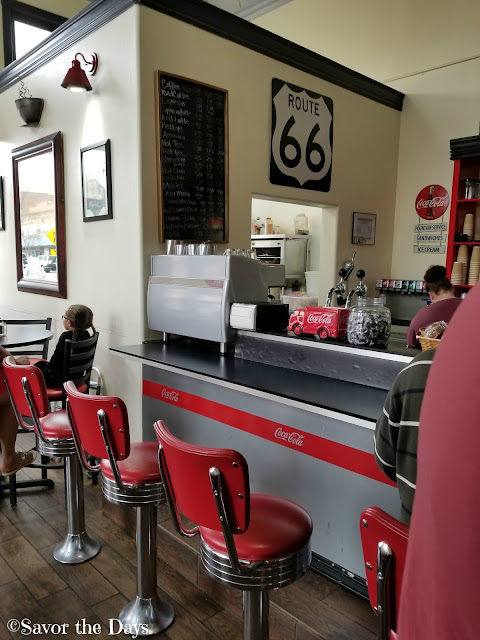 The ceiling still looks like that of an ornate bank. 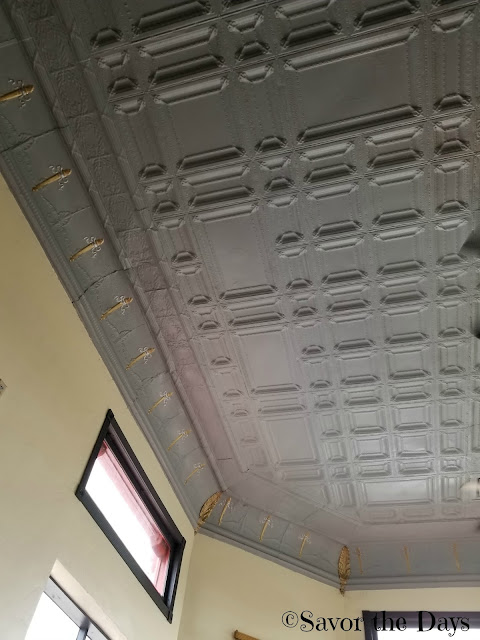 But the main keepsake of the old bank is the vault door that is still there right next to the ice cream case.  I love that they kept pieces from the old days.  It just adds to the soda fountain shop charm. 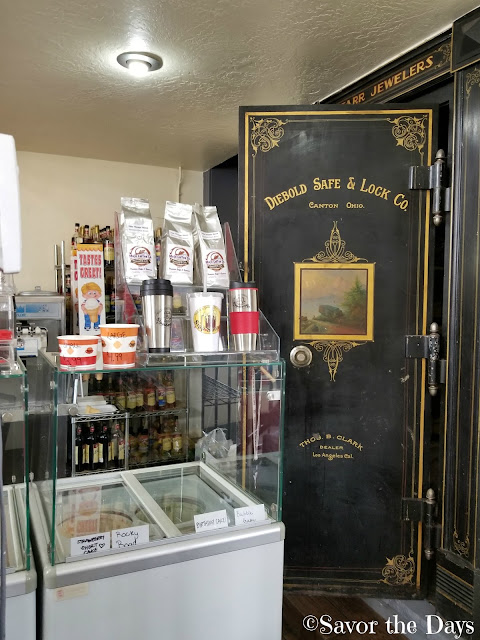 Not only is the atmosphere nice but their sandwiches and milkshakes are great too! 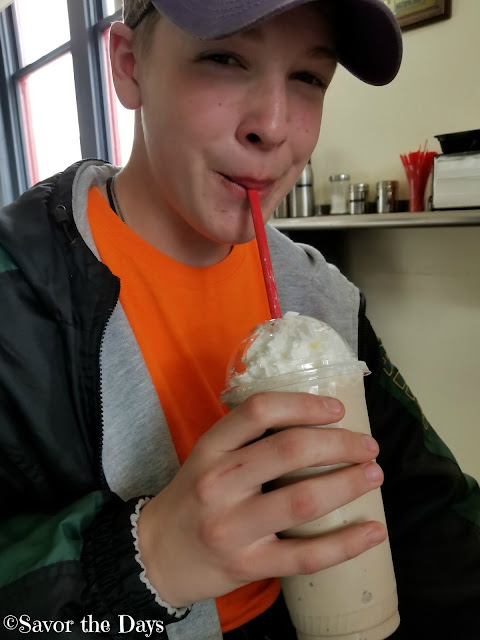