Our next stop on path of the Route 66 was the Petrified Forest National Park.  This is the only National Park along Route 66.  I knew I wanted to stop here because my happy place in on a trail in the woods so a forest sounded like a wonderful place to explore.  However, I didn't actually read about the park until we were on the road.  My, what a surprise we were in for! 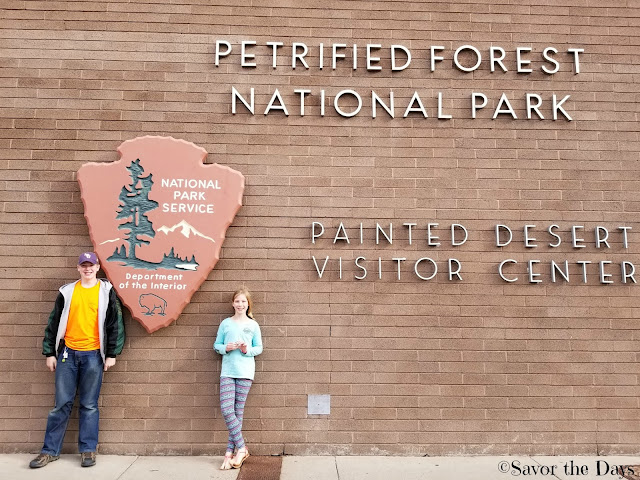 There is no actual forest at the Petrified Forest National Park! 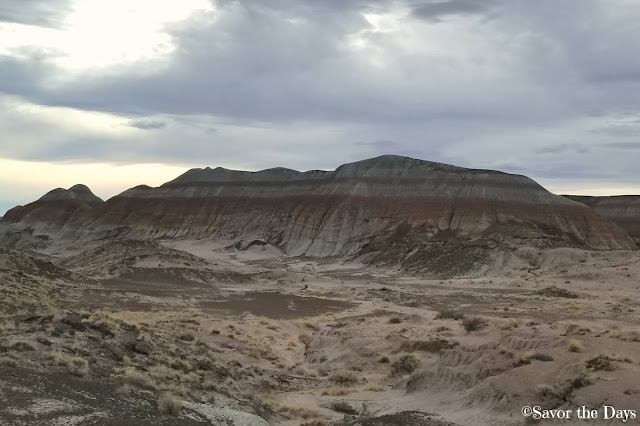 In fact, it is often called the Painted Desert due to the amazing color striations on the rocks and the desert-like landscape. 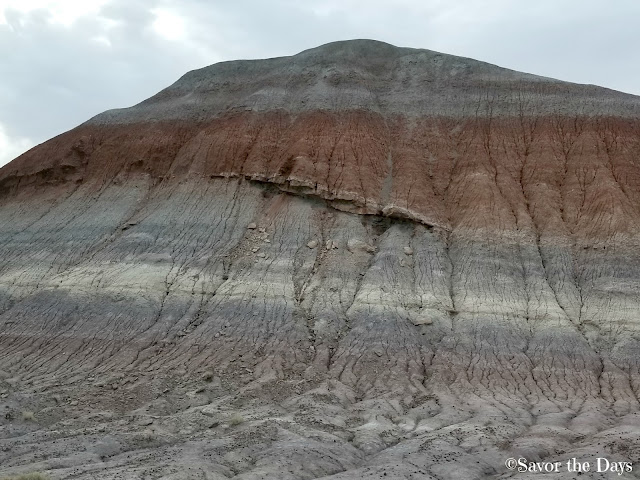 So why is it called a petrified forest?  Well in prehistoric times there was an actual forest here.  It is unknown if this forest died of natural causes or it was the fault of a catastrophic event.  Either way, the trees died and were washed away and buried in sediment which protected them from oxidation and decay.  The wood absorbed the mineral-rich water and silica in the ground and eventually crystallized into quartz.  As a result, the landscape of the Petrified Forest is scattered with logs that have been petrified and turned into rocks. 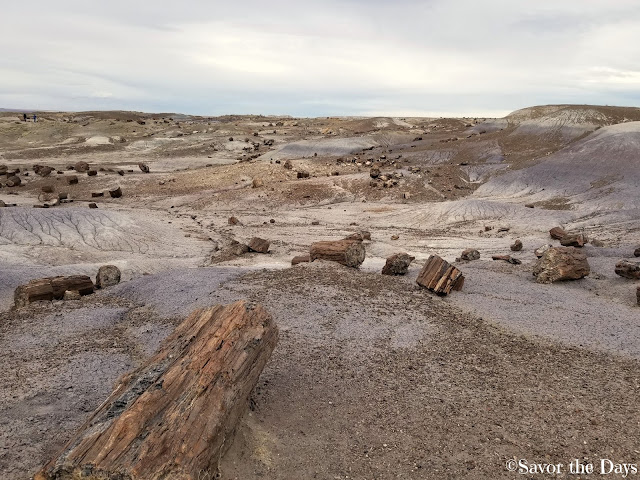 These rocks are a beautiful rainbow of colors telling the history of this area. 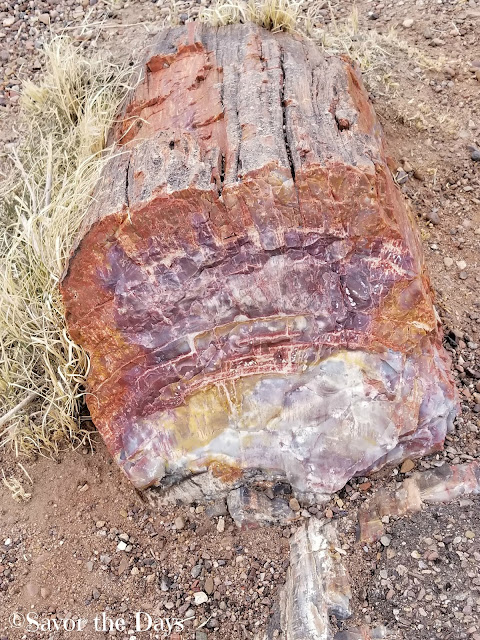 Researchers have found other types of fossils in the park including ferns, reptiles, amphibians, and even dinosaurs.  I would have loved to have learned more about the park but we were on a time crunch and couldn't stay in the visitor center to watch the movie about it.  We had to get out and explore! 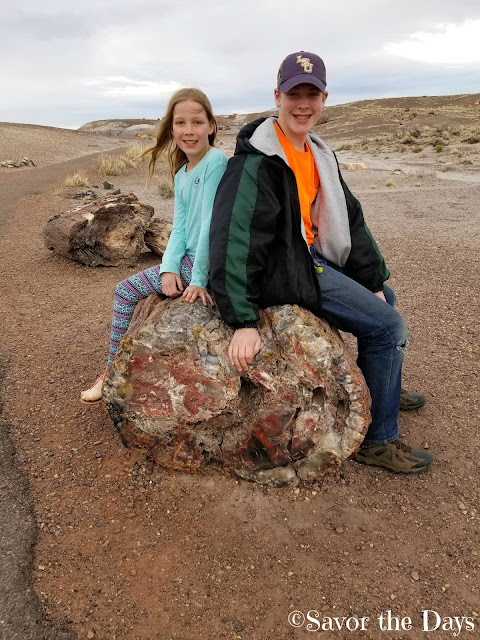 This is inside a petrified log!  Isn't that amazing! 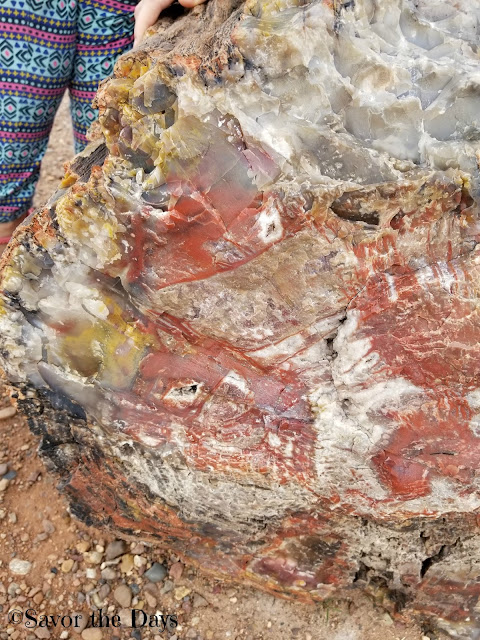 Reds, whites, yellows, black.  And it all has the texture of a rock, not wood. 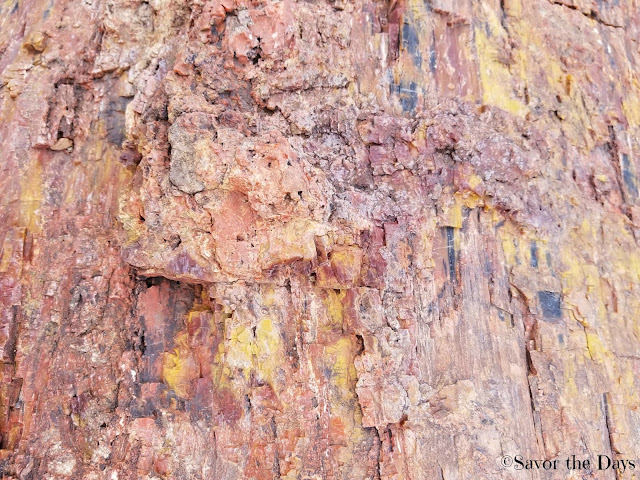 We walked around and climbed on top of lots of petrified wood.  The park is 230 square miles and we only saw a tiny bit of that but it was impressive and fun to explore. 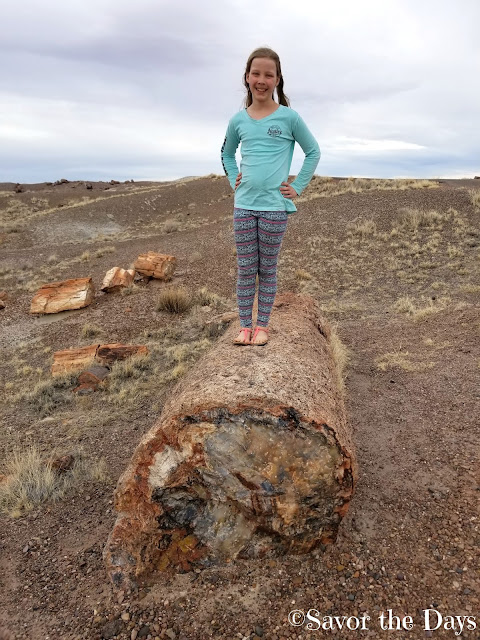 The map of the park shows the main points of interest where visitors would want to stop and explore.  There are paved trails to follow if you'd like.  We had about 40 minutes to see the entire National Park before it closed so we picked a few spots that sounded good and just hit those. 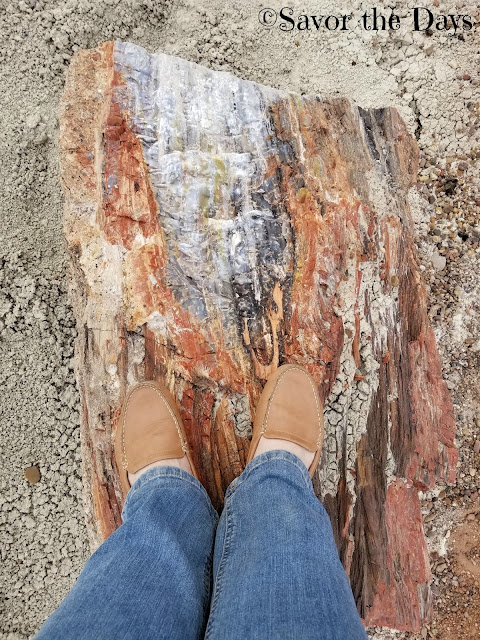 One of our stops was at the Crystal Forest.  Again, no real forest here but you can see where the living trees once stood. 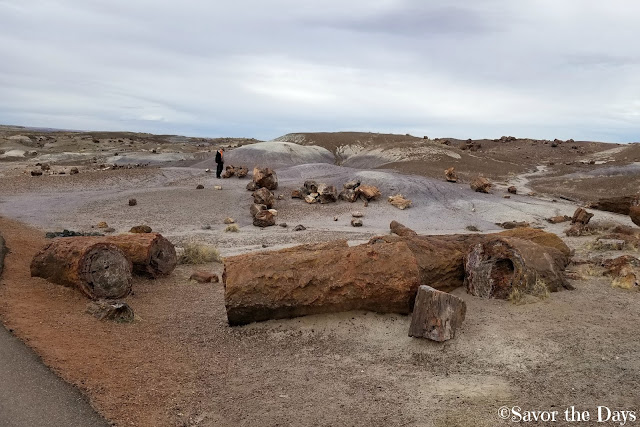 The bark of the logs has a different look and feel to them because they have now turned to quartz. 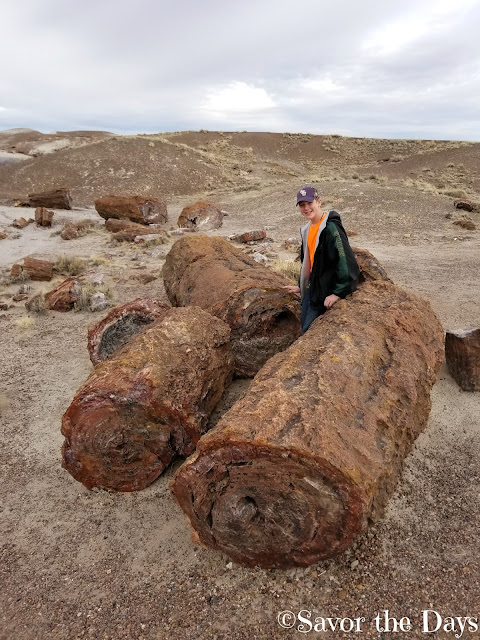 But the real difference is seen when you find a log that has been sawed through so you can see the inside of it.  It's just amazing that this colorful rock was once a living tree! 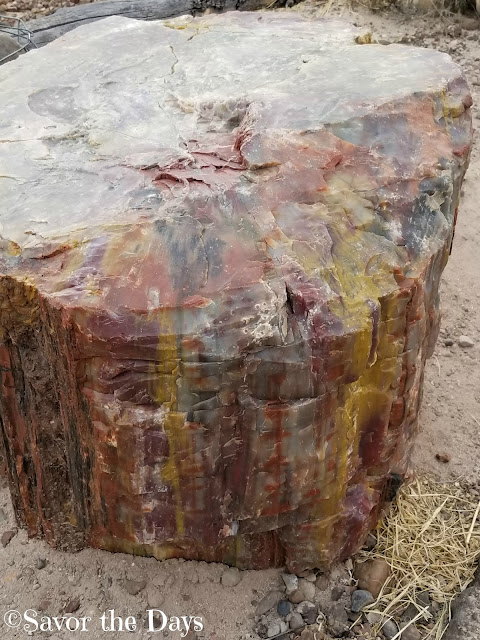 As beautiful as these rocks are, you are not allowed to take any pieces of petrified wood from the park.  But don't worry.  There are plenty of gift shops outside the park that are happy to sell you a piece of petrified wood harvested from nearby areas outside of the park. 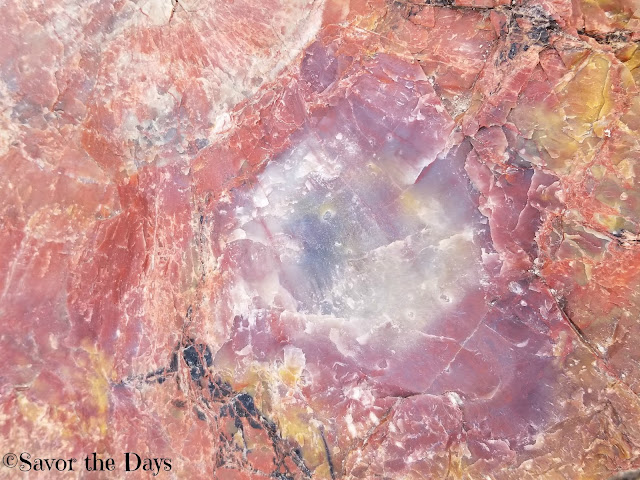 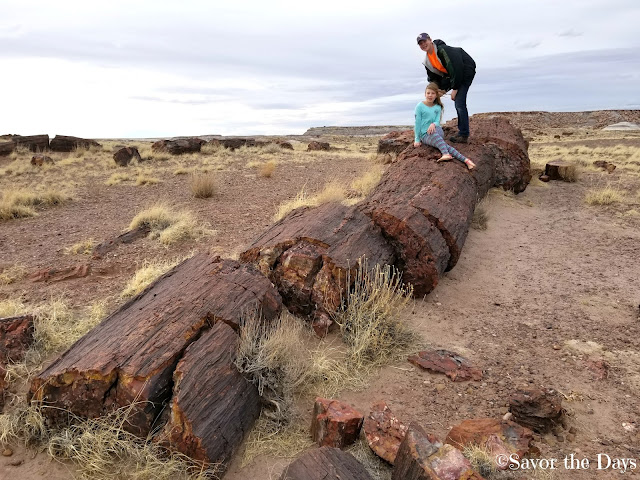 This is my favorite close-up picture of the petrified wood.  I just love all of the beautiful colors of crystal. 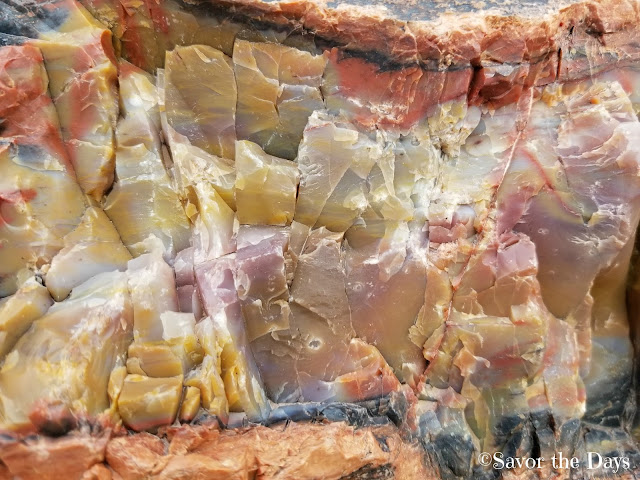 Our last stop was at the Giant Logs Trail.  This spot has the largest logs in the park including "Old Faithful" which is the largest. 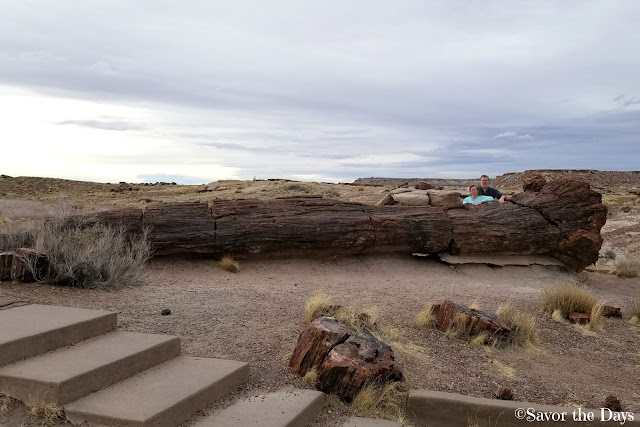 Old Faithful is 10 feet across at its base. 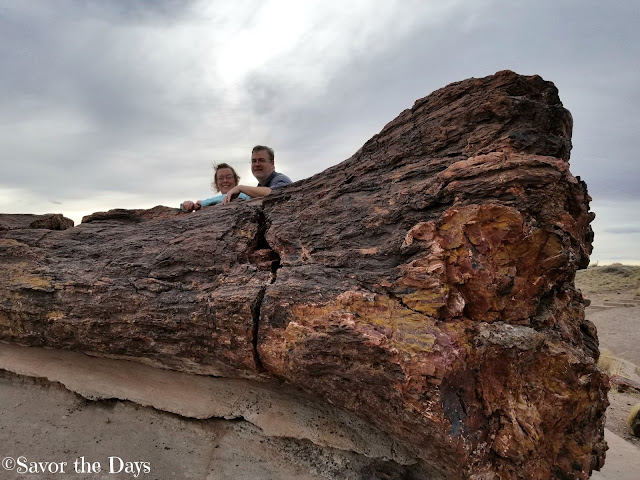 I just had to include this sweet picture Nicholas caught. 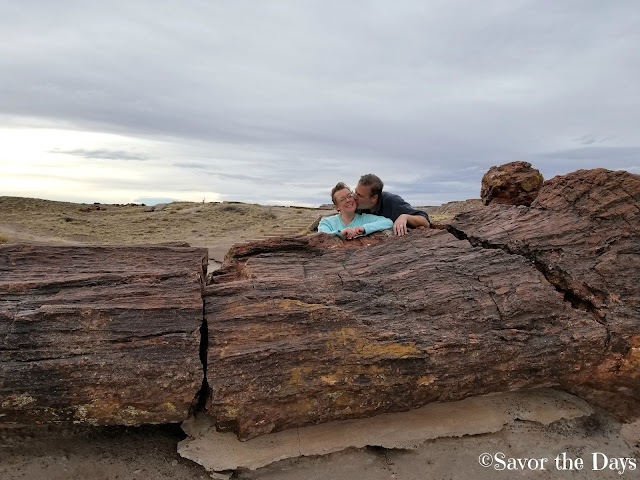 Ok, maybe this picture is actually my favorite.  It is just so beautiful. 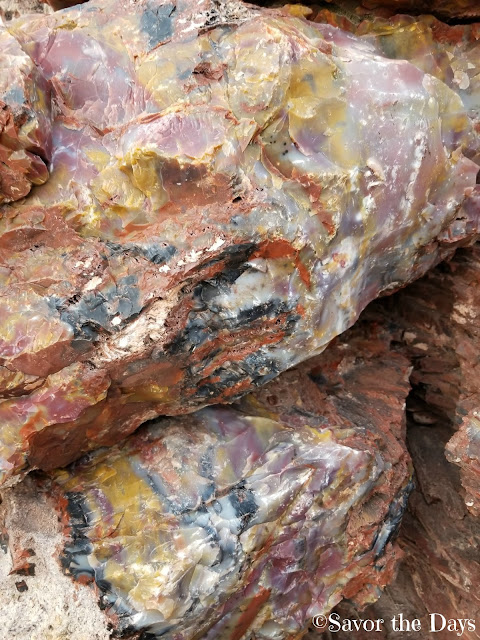 I found this color chart on Wikipedia which explains the elements that contribute to the different colors of petrified wood: 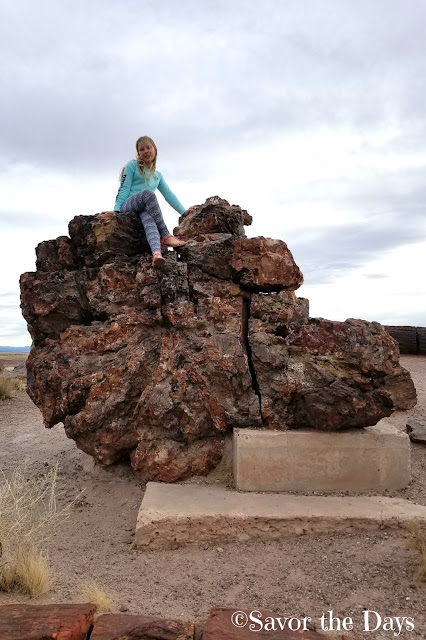 Some of the other points of interest in the Petrified Forest National Park that we didn't have a chance to see include:


Yes we missed all of this!  I would have loved to have seen it.  The main problem was a lack of planning and poor navigation on my part.  There are two entrances into the Petrified Forest National Park.  As we were traveling east on I-40, we should have taken the exit for 180 and entered the park at the southern entrance.  We would have arrived sooner and had more time to spend in the park.  We could have then followed the main road all the way north until it exited again on I-40 and we would get back on our merry way heading east to Albuquerque. 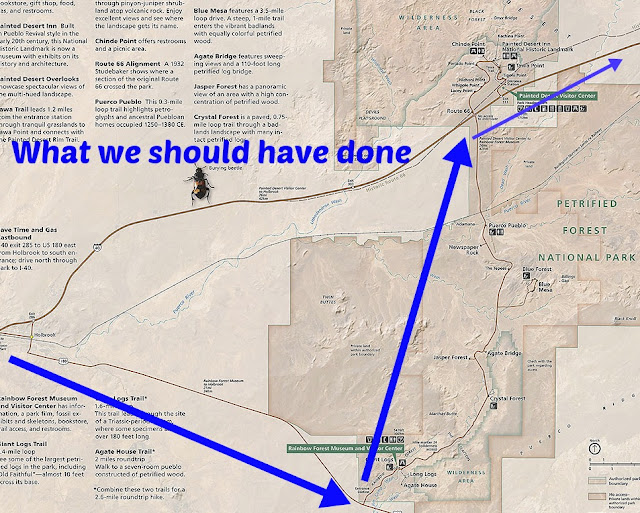 Instead we missed this important fact and traveled much farther to get to the entrance on I-40.  It may not seem like a big deal since we need to keep traveling east on I-40 when we leave the park anyway.  But the problem is that when the park closes, the park rangers drive down the road from the northern entrance and force everyone to go out of the southern gate.  Not only does this mean that we had to race to the southern part of the park so we would be the last to get kicked out and could squeeze a little bit more time into our exploring but this also meant that we lost that distance and time spent driving to the I-40 entrance and ended up repeating that drive again when we got pushed out at closing time. 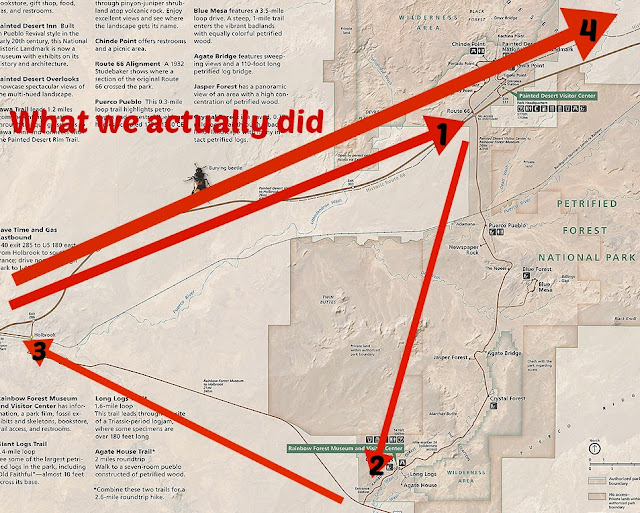 Oh my goodness!  Missing that exit at 180 cost us probably 1 1/2 hours of drive time!  Unfortunately that meant that we were really tired when we finally made it to Albuquerque around midnight, especially Stuart who was doing all of the driving. 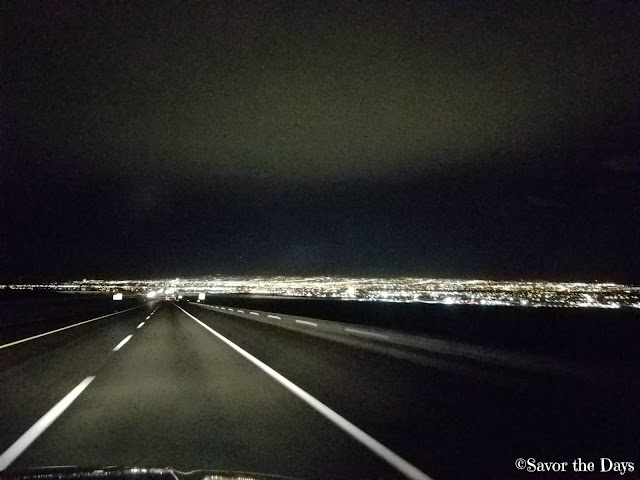 Earlier in the day, we had decided that we needed to make it to Albuquerque by evening because we needed to make it home by tomorrow night. While on the road we were making calls to hotels in Albuquerque trying to make a reservation for the night....because this trip is happening entirely without a flight plan. We quickly learned that there were two big conventions in town and every single hotel was booked.  We looked at driving about an hour north to find a place.  Fortunately we finally found a Holiday Inn on the east side of town that a few rooms left (apparently the conventions were more on the west side of town).  Happily we took the room and when we arrived to check in there was a sign on the door letting others know that they had no rooms available.  Whew!  We were so grateful to have made that reservation instead of just rolling into town to see what was available.  Ok, so maybe a little planning ahead is a good thing.