It's hard to explain to kids about sound waves because they think in such concrete terms that they just can't understand it if it isn't something they can see or touch.

However, there are ways to "show" them sound waves.

I tied some twine to a clothes hanger and then attached some Rice Krispies to the other end of the twine. Have you ever tried tying a not around a small lightweight thing like a Rice Kripsie? It took a lot of time and a lot of patience! I hung the hanger from the light fixture over the kitchen table so they would be still and not disturbed. 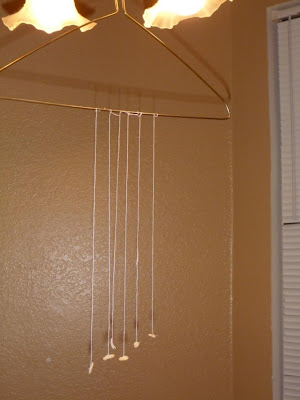 I then tried to show sound waves to Nicholas by having him snap a rubber band to make a sound next to the Rice Krispies so that he could see them move. However, this experiment is flawed because there is air being pushed by the movement of the rubber band so it isn't showing just the sound waves.

Stuart had a much better idea. He got out his phone and played some music right next to the Rice Krispies. It was amazing to see them bounce around to the music! 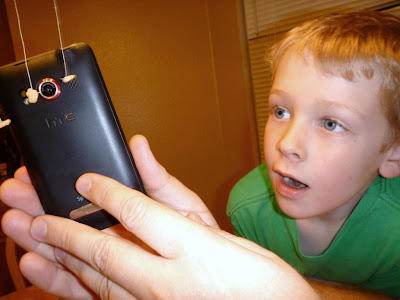 The Rice Krispies really were still until the music started. There is nothing touching them. They are moving because they are being hit by sound waves. Cool demonstration, huh? Thanks, Hubby!