Nicholas made his first lapbook for our study on Japan. I think we will try to complete a couple more lapbooks this year.

A lapbook a way to gather and present material learned. Typically what I've seen used are simply manilla folders to hold the information.

I helped with the foundation which is just two red manilla folders. I opened each folder then folded each side inward about half way. This makes for a back piece that is about 8 1/2 x 11 with two smaller flaps that fold together in front. I made two of these and glued one set of flaps together to connect them. The back piece now shows the original fold in the folder so I covered this on both folders with just a piece of yellow cardstock. It made for a neat way to present some of the lessons we had worked on along the way. 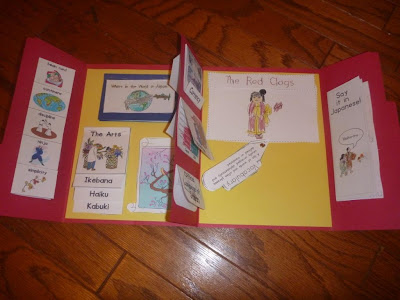 For some videos on how to make lapbooks in various ways, please check out Homeschooling On A Shoestring.

You can use a lapbook to put together information that you create or you can find lapbook templates online. The lapbook is usually made up of lots of smaller presentations or mini-books. The templates may have a cover page and then the child writes in something in the following pages or cuts out cards to put in a pocket or some other small project like that. Nicholas really enjoyed these. He would make a mini-book after studying or reading about that particular thing. By working on each mini-book as soon as he learned about a subject, it helped to reinforce and strengthen what he has just learned. Making a lapbook is also a very hands-on way to reflect back what they have learned in a kinesthetic way which Nicholas responds well to. We found 2 lapbook templates online that corresponded with books that we had read. One was for A Pair Of Red Clogs. I purchased the digital version of this lapbook online at Hands of A Child. It was a great lapbook but we wanted the lapbook to represent more of them things he had learned about Japan so Nicholas picked a few projects from this lapbook and a few projects from a free lapbook that we found online that corresponds with the book, Look What Came From Japan! by Miles Harvey (another great book about Japan). He put all of his mini-books and projects together to make his first lapbook!

Each of these little pieces has a flap to open or removeable cards or something fun like that! 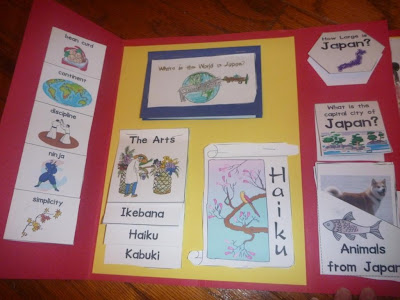 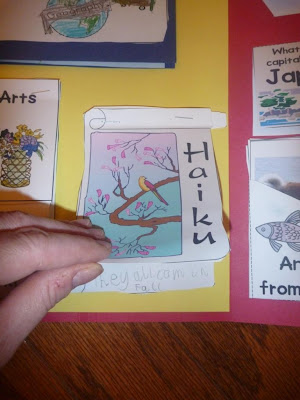 He made a pocket titled, "Animals of Japan" and cut out cards with pictures of the animals on one side. He wrote a brief description of each animal on the back side of the card. 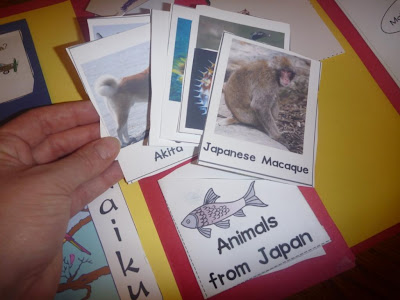 Here are some vocabulary word flaps. You open it up to see the definition. Here is "discipline": 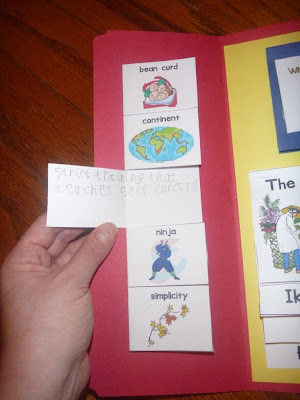 The vocabulary fan hangs from the second folder along with lots of little tabbed cards with facts about Japan. 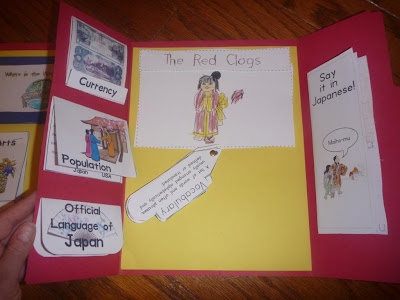 Here's an example of one of these facts as Nicholas compared the number of people in Japan and the United States. 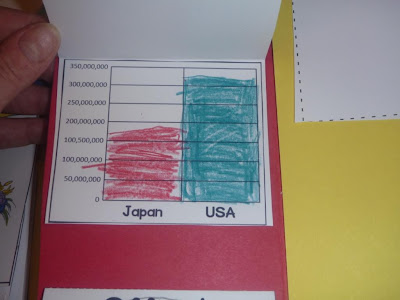 Lapbooks are a fun way to preserve a memory of what your child learned but it is also fun for them to make the mini-books and of course they love to flip through all of their little creations. This makes it a great tool for reinforcing learning, especially for a "hands-on" type of learner.

at September 12, 2011
Email ThisBlogThis!Share to TwitterShare to FacebookShare to Pinterest
Labels: homeschool, Konos