Nicholas had his 6 year old well-exam today. Yes, he turned 6 in April and I'm just now getting around to taking him to his well-exam. I really haven't had any concerns so I didn't feel it was really that important, especially where there are so many other things to do that are more fun!

He's doing fine. Still a little tall for his age but he's always been that way. He takes a daily dose of a steroid medication to prevent wheezing episodes. He used to get these every few months and sometimes they were really bad. But ever since he started the daily Pulmicort Flexhaler, he hasn't had an episode at all. However, he still has an asthma diagnosis and the doctor wants to wait a little longer before we try cutting back on the dosages because we don't want to risk a serious flare up again.

Nicholas managed to convince me without too much persuasion that I should take them to get some ice cream since he did so well at the doctor's office. He didn't get any immunizations so I don't really understand what the "did so well" part was all about but honestly ice cream just sounded good to me so it made for a convenient excuse!

Nicholas got a cone with sprinkles on it. The ice cream dripped on his shirt. 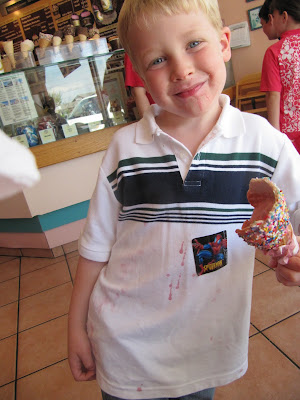 And the sprinkles stuck to his face. 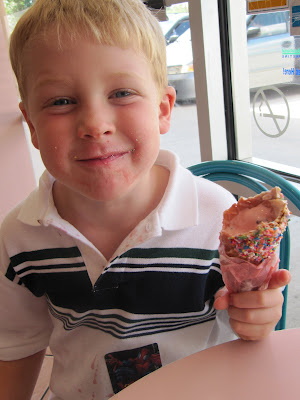 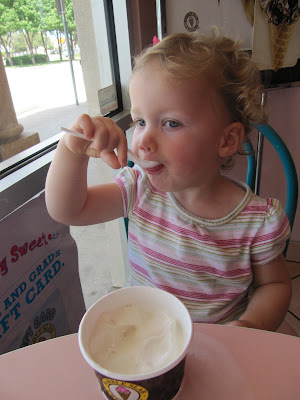 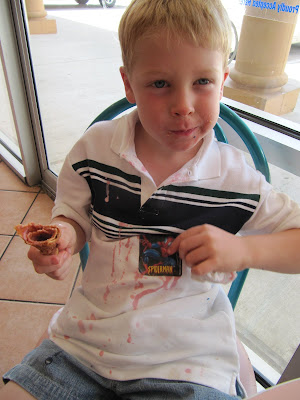 Nicholas commented that he DID have one clean spot on his shirt - right under the sticker! Boys will be messy boys!
at June 15, 2010
Email ThisBlogThis!Share to TwitterShare to FacebookShare to Pinterest