Chimney, Our Elf on the Shelf

I had hoped to get an Elf on the Shelf last year to start a new Christmas tradition in our home but somehow I just never got around to it. This year, we got one! What is an Elf on the Shelf? He is a cute little elf that comes with a nice hardback book that tells his story. 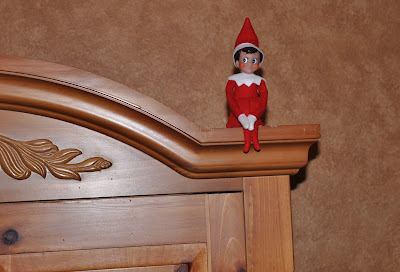 The story says that the elf is one of Santa's helpers and he was sent to our home to watch us and report back to Santa. Nicholas first discovered our elf sitting on a shelf up high. The story says that we must name him and Nicholas decided to name him Chimney since he probably comes and goes by way of our chimney. Each night while we sleep, Chimney flies to the North Pole by Christmas magic. He tells Santa if we've been good or bad and then he returns to our home before morning. Each morning he reappears in a new spot and we get to jump out of bed and see who can find him first. There is only one rule: We can't touch the elf. If we do, his magic will disappear and he won't be able to tell Santa what he's seen or heard. Santa has told Chimney that he can't speak to us but he'll listen to us if we tell him our Christmas wishes. On the night before Christmas, Chimney will return to the North Pole to spend the rest of the year with Santa but he'll be back to visit with us again next Christmas.

What a fun idea! Nicholas is very excited about his new elf friend and he enjoys running around the house hunting for him each morning. Some days he doesn't find him until later in the day but he's always excited when he sees him. Of course, Stuart and I are hoping to get a few miles of extra good behavior as a result of having one of Santa's helpers right here in our home.
at December 16, 2008
Email ThisBlogThis!Share to TwitterShare to FacebookShare to Pinterest