Baton Rouge or Bust! We left Saturday to go to Baton Rouge for Christmas. Yes, another long trip with a 4 year old (Nicholas corrects me and says 4 1/2 year old!) and a newborn. Yes, we're crazy. Unlike the trip to Florida, this time we drove. It's usually an 8 hour drive but this trip took about 9 hours since we had to stop more often and for longer to take care of feeding Rachel, diaper changes, etc. To make the trip even more interesting, we had tons of things to get done before we left so instead of leaving at dawn like we usually do, we didn't leave the house until 3:00 in the afternoon! Super crazy, huh? The trip was fine though. Nicholas is used to the long drive and always does well. Rachel slept the whole way.

Needless to say, we all slept late the next day and lingered around Stuart's parent's house for a while before we got going. Then we had some errands to run and actually went to the mall on the Sunday before Christmas. Not our brightest idea ever. It took forever just to make it half way around the mall on the little service road the circles it. We met mom at Jason's deli for a nice lunch. It was her first time to meet Rachel. She is definitely a proud grandmother!

Today we hung out at Stuart's parents' house for a while. Nicholas likes playing with this toy keyboard that I think used to belong to Stuart when he was little. Stuart calls it a "keytar" becuase it's a keyboard that you hold like a guitar. Nicholas wanted to show Rachel how to play it. 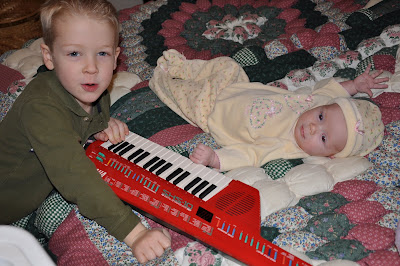 One of the things we miss most about Louisiana, besides our friends and family, is the food. One of our favorite foods is hot cajun boudin made in a little convenience store in the Greenwell Springs area called Jerry Lee's Quik Shop. Don't bother with boudin from anywhere else. I've tried them all and none compares to Jerry Lee's. For those of you who don't know about boudin, it looks like sausage but in addition to meat, it also contains rice and lots of spice and flavor. I'm not sure what else is in boudin. I probably don't want to know the exact ingredients in it (or in their Hog's Head Cheese). But the final product is some really good stuff. Nicholas tried it once when he was little and we were surprised that he ate a lot of it because it is spicy hot. He doesn't like spicy foods these days but he tried it again today and ate about half of a link. C'est bon, cher! 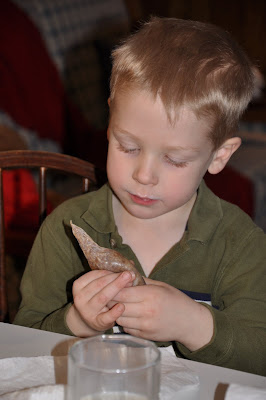 We usually lounge around in the mornings when we are in BTR, mostly because we always seem to stay up way too late the night before. This morning, Rachel was the first one up and after feeding her I brought her to bed to snuggle. When Nicholas woke up he crawled into bed too right next to Rachel. They were so cute cuddled up next to each other that I had to grab the camera. Of course, as I was getting the camera, Nicholas got bored and rolled away, but they are still cute together. 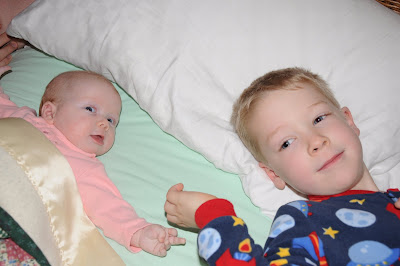 So I started taking several pictures in a row and managed to catch this one by accident. 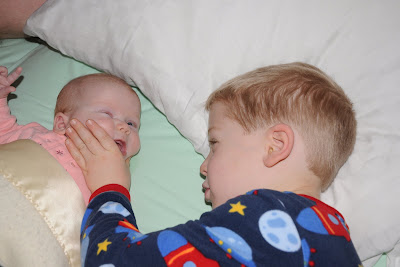 Nicholas was actually being sweet to Rachel at the time although it is hard to tell that from this picture. He told her to smile for the camera and when she didn't do it on her own he decided to help her do it. He tries to be a good big brother but sometimes he is just too eager to make Rachel do something. If she isn't looking at something he wants her to see, he will try to grab her head and turn it for her. If he wants to show her a spaceship he made, he will fly it within an inch of her eyes to make sure she gets a good look at it. He loves his little sister but we have to keep a close eye on him or he just might kill her with kindness. Rachel actually didn't mind the incident one bit. She loves looking at Nicholas and she always smiles at him. 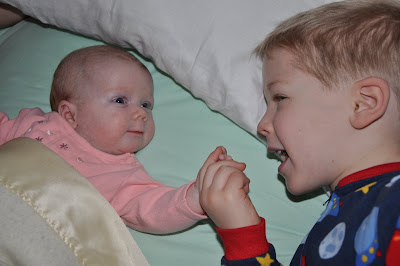 Grandmother got lots of good "Rachel time" and even had her laughing in one of these pictures below. 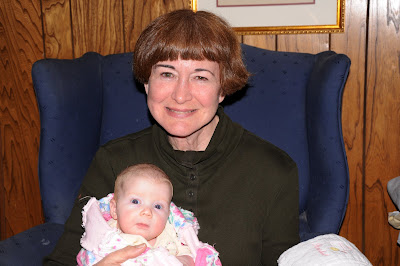 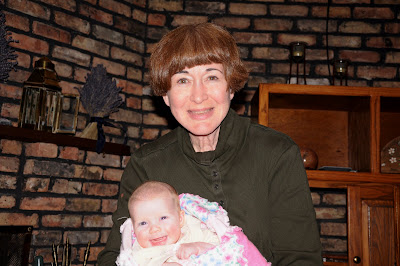 at December 22, 2008
Email ThisBlogThis!Share to TwitterShare to FacebookShare to Pinterest