Today Rachel and I attended the special Christmas chapel at Nicholas' preschool. Nicholas' class were dressed as shepherds and they sang, "Go Tell It On The Mountain". I wore Rachel in a fabric sling across my chest so I would be hands-free in order to take video or pictures of the performance.

I got a good video clip of Nicholas walking into the chapel and he waves at me then gets excited when he sees Rachel with me and he smiles as he points to her. As he keeps walking in he waves at some other boy in a pew and gives a "You're the Man" type of finger pointing to the kid. How funny! What's up with the pointing thing? :)

I found a good spot in the chapel for getting video of him singing from the stage. I was especially excited when I saw him in line and realized that he would actually be closest to the side of the chapel I was on (it was just a lucky guess on my part). However, with his shepherd's headpiece on it made it hard to actually see his face.

I was standing near the entrance as Nicholas and his class were leaving. The line he was in stopped for a moment just as he got close to me. Rachel was still in the sling in front of me and Nicholas couldn't resist coming over to me and giving Rachel a kiss then hopping back in line. Then he came over to us again and gave her several more kisses. What a sweet big brother.

Ok, finally, here's the actual video clip. Sorry it's a little bouncey at times but I was carrying Rachel in a sling and she got fidgety at times when messed with my recording a little.

After the performance, the class got together for a group picture. Nicholas is the one standing up in the back waving at me. 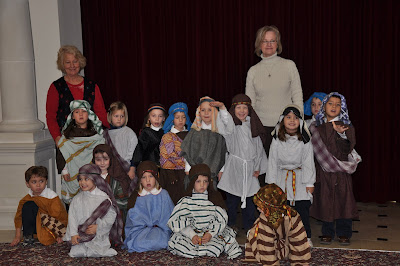 Nicholas was excited to have Rachel at his performance. He proudly introduced all of his friends to her and even introduced children's parents to her. We asked Mr. Whtittaker to take a picture of the three of us together. What a proud big brother! 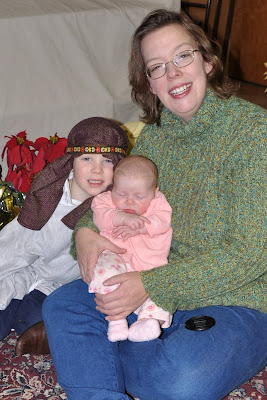 Nicholas brought home from school a cute ornament with his picture on it. He wouldn't let me see it at first and only teased me by showing me the back side of it over and over again. He loves playing games like this, especially when I add a lot of drama to my reaction. Finally, he got a big smile on his face and he let me see the picture side. He couldn't wait to hang it on our Christmas tree. 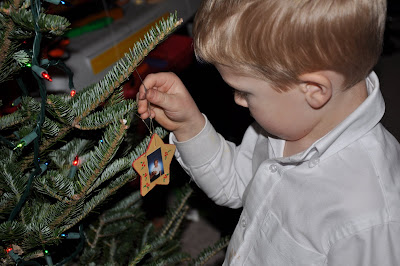 at December 18, 2008
Email ThisBlogThis!Share to TwitterShare to FacebookShare to Pinterest