We didn't bring many toys for Nicholas to play with in Baton Rouge since he would be getting so many on Christmas. He actually gets three rounds of Christmas presents all in one day. When Nicholas wakes up on Christmas morning, he finds presents under the tree from Santa and from Stuart, Rachel, and me. This is our own little family Christmas. This is Christmas round #1. Then we head over to my brother's house and have Christmas round #2 with my family. We eat Christmas lunch over there. Then we head back to Stuart's parent's house where we have Christmas round #3. Nicholas opens gifts from Stuart's parents and his brother's family and we have Christmas dinner. It's a full day of family, food, presents, and fun. Of course, Nicholas loves playing with his new presents with his cousin and my brother.

However, this year we were planning to leave Baton Rouge right after Christmas. We wanted to give Nicholas some time to play with his toys while he was there, especially since we knew Uncle Steve O. would love to play with all of the Star Wars toys that Nicholas had asked Santa for. So we had to get a little creative and we asked Santa to come one day early this year. And, being the kind hearted soul that he is, he graciously complied and put Nicholas' toys under the tree on Wednesday, December 24th.

Of course, Santa still needed some cookies and milk for all of his hard work. Unfortunately we had planned for most things but somehow we had no cookies and had just ran out of milk earlier in the evening. Yes, I stink for not having this important detail ironed out before hand but fortunately Nicholas didn't mind at all. He was happy to leave Santa some white chocolate pretzels and bottled water... 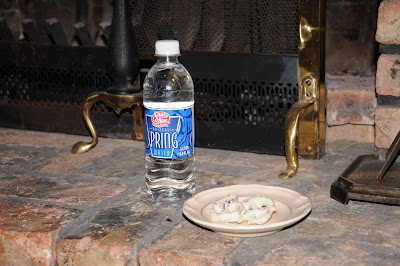 ...and Santa enjoyed them just the same! 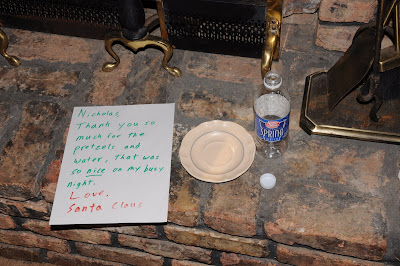 Christmas morning is when we get presents from Santa and from each other as a family. Of course this means we have to haul everything over there just to be unwrapped and then haul it all back home. We do love having a big truck for our Christmas trips to Baton Rouge!

Nicholas started the morning with his stocking. He was excited to find his favorite dinosaur, Anklosaurus, waiting for him there. Then he started pulling out presents from under the tree. I was proud to see him correctly reading the To/From tags on the presents and giving them to the correct person to open. How cool is that?

Nicholas sang songs when he was really excited about a present. He started off with getting a few Star Wars toys which he lined up and called his "Star Wars aisle". As he got more cool toys that he added to the line, some of which were not Star Wars related, he decided to just call it his "Cool Pile". He likes the I Spy series but for some reason that one lone book was the only thing in the "Non Cool Pile". 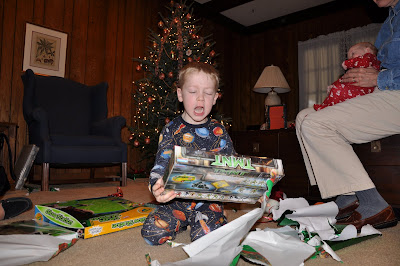 He did well for Christmas #1. He got lots of Star Wars action figures, Teenage Mutant Ninja Turtle action figures, a complete set of Magic Tree House books, an I Spy book, The Star Wars Visual Dictionary, Star Wars movie DVDs, a Crayola Glow Station, and a Color Explosion Glow Board.

Santa even brought Rachel a few toys. Nicholas opened her presents for her and he was excited to show her how her toys worked. 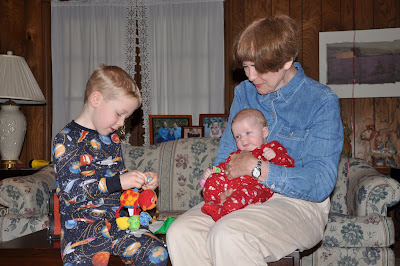 But Rachel got bored with us all and decided she just wanted to go back to bed... 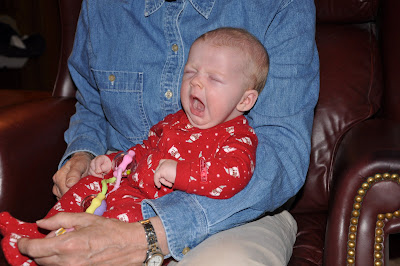 One of the presents under the tree was from Nicholas to me. It was a candle wick cutter and there is a cute story behind it. 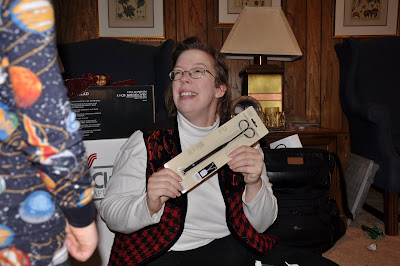 I like candles and I have several of the big jar candles from Yankee Candle. As they burn down, you have to keep trimming the wick but it can be hard to get scissors down in the jar as the candle burns down. One day as I was struggling to get the scissors to cut sideways while my hand was holding them upright, I grumbled that I wished I had some kind of special scissors that could reach down in there and cut the wick more easily. I wondered if there might already be some kind of candle wick cutter out there. Honestly didn't know if such a thing existed but apparently Nicholas remembered what I said. As Christmas approached, Stuart asked me what I wanted for Christmas. I didn't have any ideas but Nicholas quickly told him that I needed a candle wick cutter. He repeated this suggestion any time discussions about a Christmas gift for me came up.

Just before Christmas, we were all at the mall and we happened to walk by a Yankee Candle store. Stuart took Nicholas in the back of the store store while Rachel and I hung around outside looking at their window displays. I could see Stuart holding something and talking to Nicholas about it. The next thing I know, Nicholas comes running out of the store and excitedly says, "Mommy! Mommy! We're getting you a candle wick cutter for Christmas!!" then he quickly runs back inside. I can see Stuart and the employees smiling as they look my way and look at Nicholas. I see Stuart tell Nicholas something then Nicholas laughs and bolts out the door again to tell me, "Mommy! We're REALLY getting you a candle wick cutter! It's a secret!" then he runs back inside. Stuart and the employees and even other customers are laughing now. Stuart smiles and shakes his head as he looks at me through the window. Stuart kneels down and talks to Nicholas for a moment then Nicholas runs back outside to see me. He says, "Mommy, we're not getting you anything for Christmas." then he runs back inside. I can see everyone in the store cracking up. A customer who had been inside the store watching all of this was leaving at that time. She smiled at me and said, "He's just so cute!"

My parents and brother went along with our early Christmas plans so we headed over to my brother's house this afternoon. My brother loves Star Wars so Nicholas was excited to show off the action figures that he got this morning. Little did Nicholas know that there was more Star Wars fun to come! 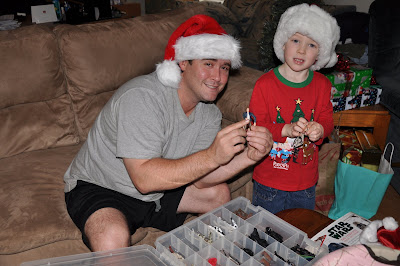 Nicholas got more Star Wars action figures, a Y wing figher, Rock 'em Sock 'em Robots, and 2 Super Friends DVDs. But everyone seemed excited about the Millenium Falcon ship that he got. Even I wanted to play with it! When Steve was little, he had all of the original Star Wars action figures and ships. I recall his Milenium Falcon but it wasn't anything like this modern day one.

We also had some fun with Rock 'em Sock 'em Robots...

The grandparents had lots of quiet time with Rachel. I hate it that we are only here for a few days because the next time they see her it will be either July or maybe even next December and she will be so much bigger by then. I wish we could come over here more often but there is a lot involved and tons of stuff to bring when you travel with two young children. 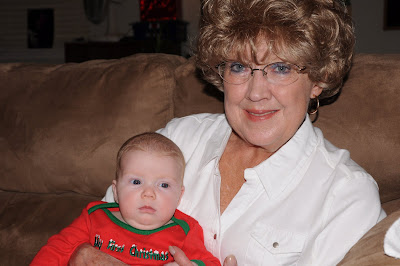 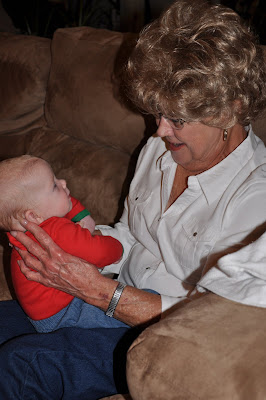 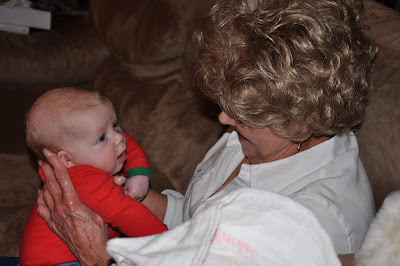 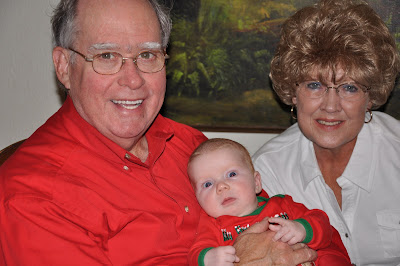 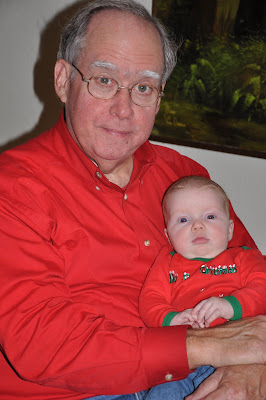 Uncle Steve played a lot with Nicholas. They played with the Star Wars toys but they also played sword fighting and played with a neat glider plane. He's a pretty cool uncle! 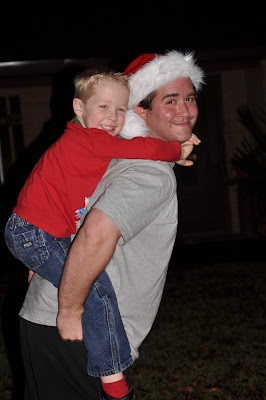 at December 25, 2008
Email ThisBlogThis!Share to TwitterShare to FacebookShare to Pinterest