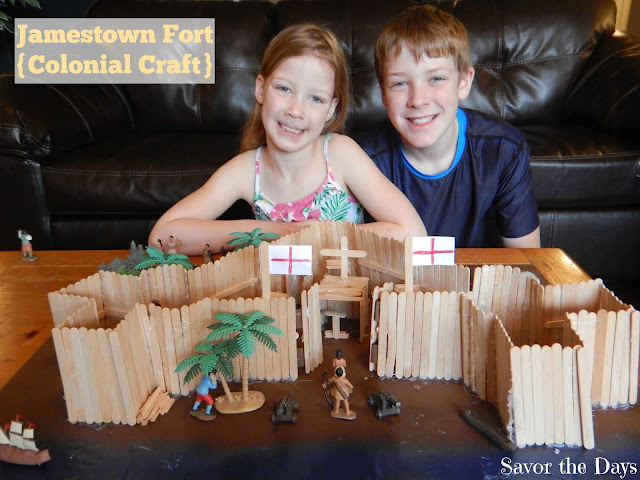 In their studies of explorers, the kids have been learning about the colony of Jamestown which was the first permanent English settlement in North America.  It was named after the king of England at the time which was King James. John Smith was their leader but unfortunately, he upset the Powatan Indians.  Their chief was just about to kill John Smith when the chief's daughter, Pocahontas, threw herself on top of John Smith to save him.  Relations with the Powatans slowly improved.  However, many of the settlers that had come over from England were just wanting to find gold and get rich quick.  They considered themselves "gentlemen" and thought they were too good to plant a garden or build a house in the colony.  As a result, the colony struggled and went through "the starving time" in 1609-1610. Only about 60 colonists survived and the colony did rebuild over time.

I found a fun online game about Jamestown from National Geographic Kids called On the Trail of Captain John Smith. 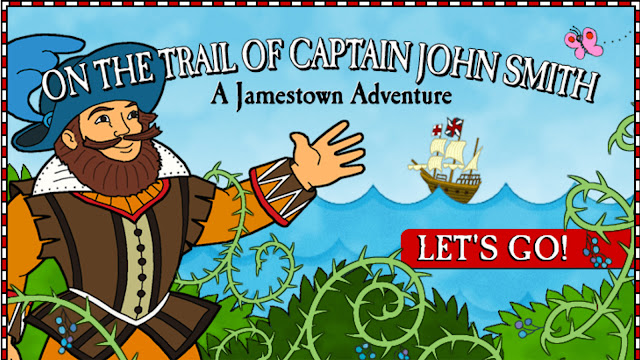 We studied the design of the main Jamestown fort.  It was located on the James River (also named for King James back in England).  It had three sides with houses and other structures build inside the fort. 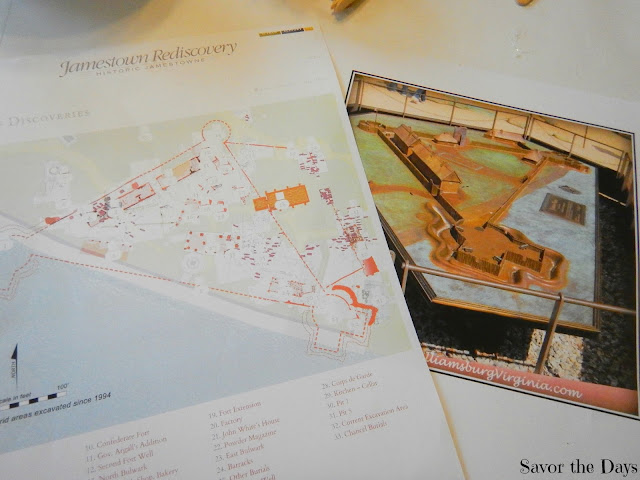 I gave the kids a Jamestown Toob full of Indians and settlers.  I love Toobs because they offer so many different sets and they let the kids play with historical characters. 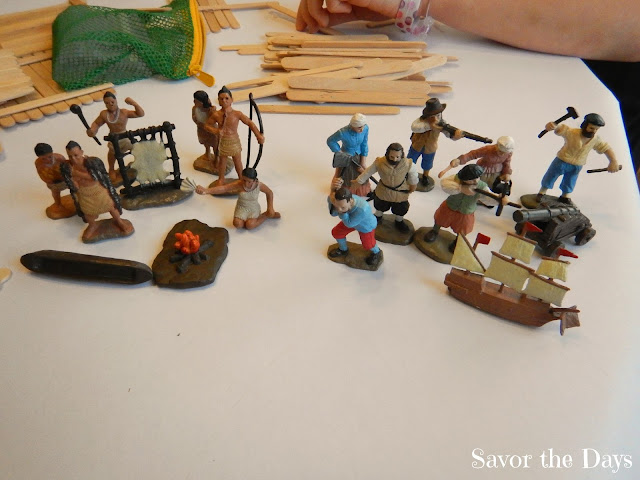 They played with the Jamestown characters for a few minutes but then decided that they needed to build Jamestown fort for them.  We have an over abundance of wooden popsicle sticks so I put those out and let the kids get to work.  This project was entirely kid-led! 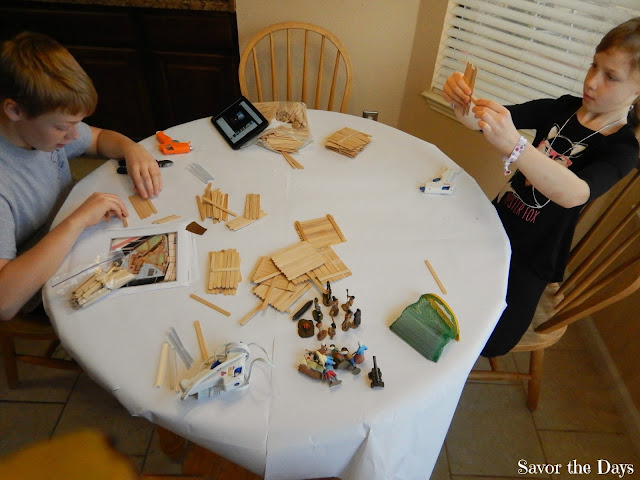 Rachel made side wall panels.  She struggled with lining the sticks up well but then created a jig to help align the sticks until she could get the cross bar glued on. 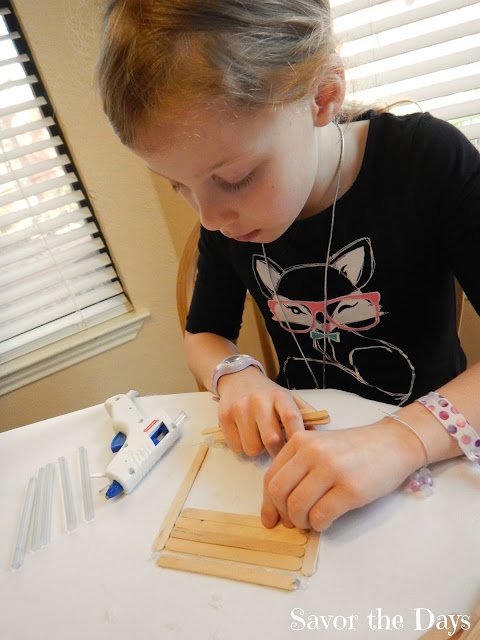 She made lots of panels like this using hot glue. 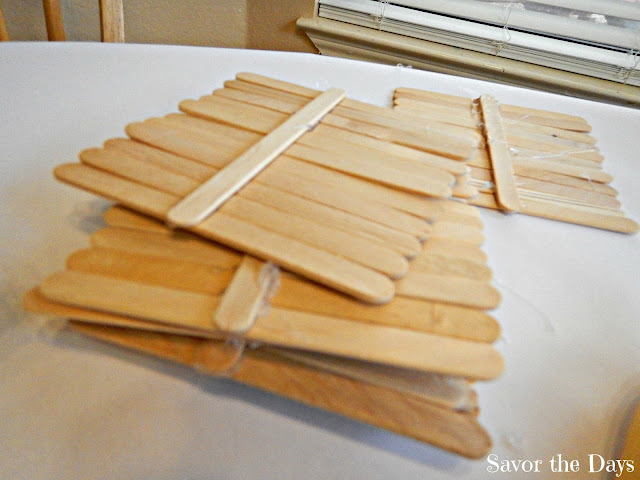 While she build the walls, Nicholas built a church and pulpit to go inside the fort! 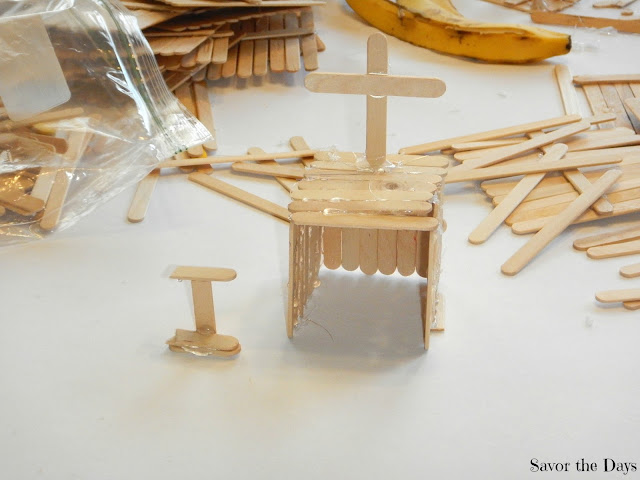 Then he build the main entrance to the fort complete with a hinged gate.  He made the hinges out of strips of brown cardstock that we had lying around. 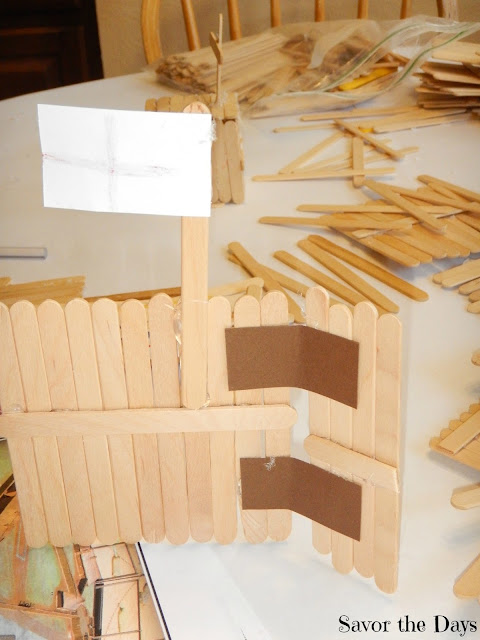 I love that he always finds way to make moving parts in his creations.  I definitely think he could be an engineer some day.  I just love the way his gate turned out.  He even researched the possible flag that the English might have used during that time. 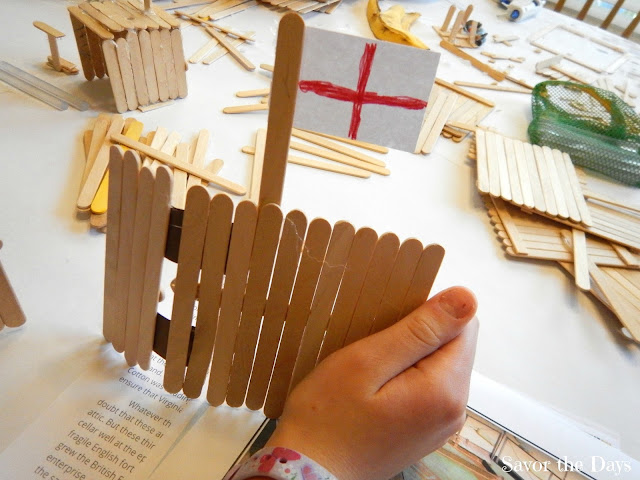 The kids noticed a little ladybug larvae in the kitchen where they were working.  Nicholas put it on a fence panel and then went to get their plastic ladybug larvae from when we studied the ladybug life cycle.  It's fun when you see your kids make connections like that. 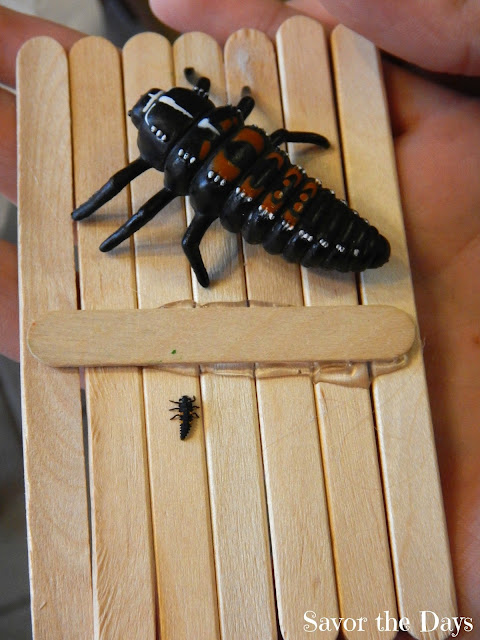 When the children finally finished building their Jamestown fort and I have to say that I was very impressed that they did this all on their own. 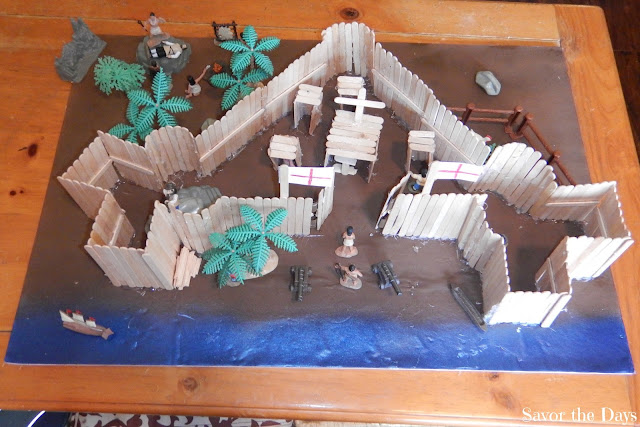 The hinged gates work great.  They open to welcome their Indian friends into the fort. 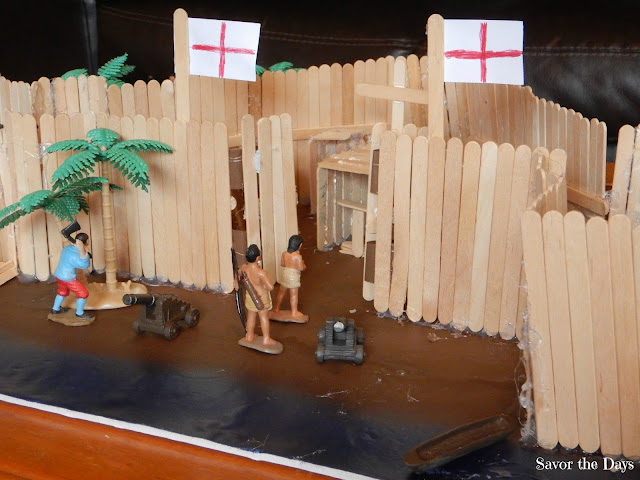 Inside the fort was a church and several homes and workshops. 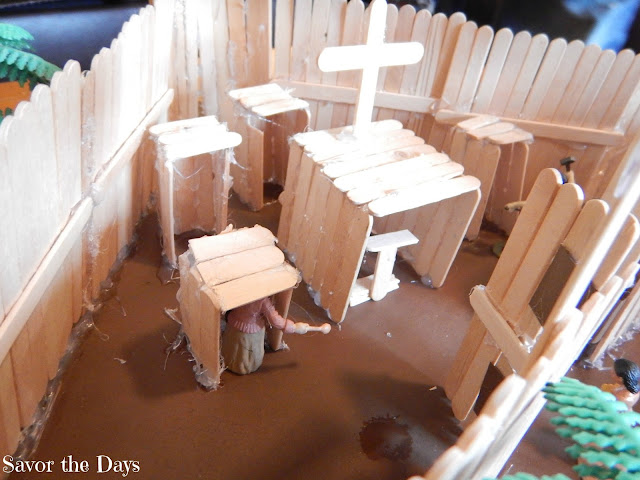 There was one guy perched on top of some stones looking out for enemies approaching the fort. 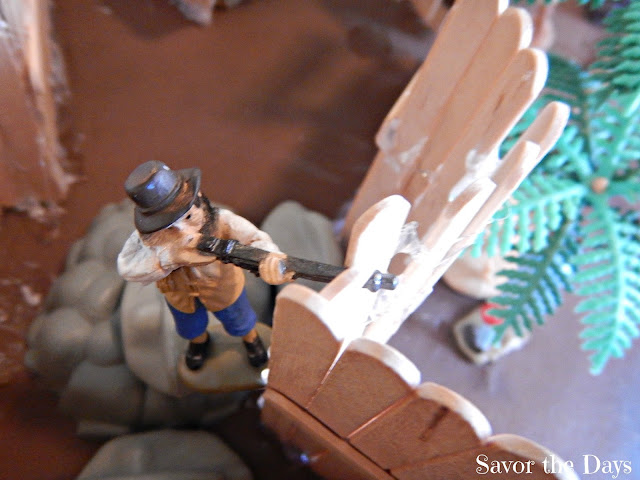 Around the back of the fort, the children placed the main Jamestown figures to show the scene of Pocahontas saving John Smith from being killed. 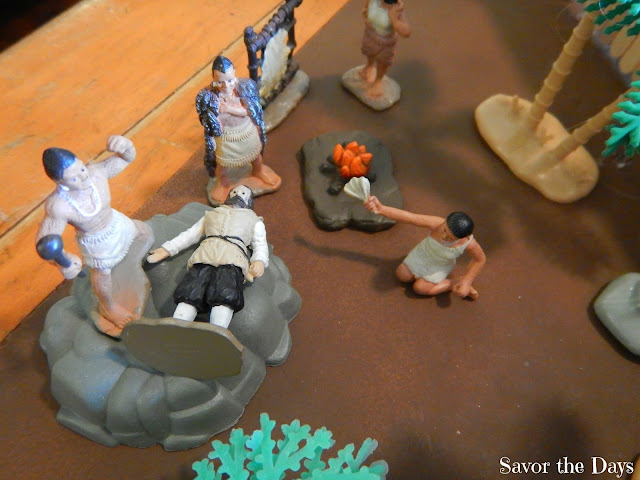 On another side, they had build a garden and placed a chicken and a lady tending to lettuce. 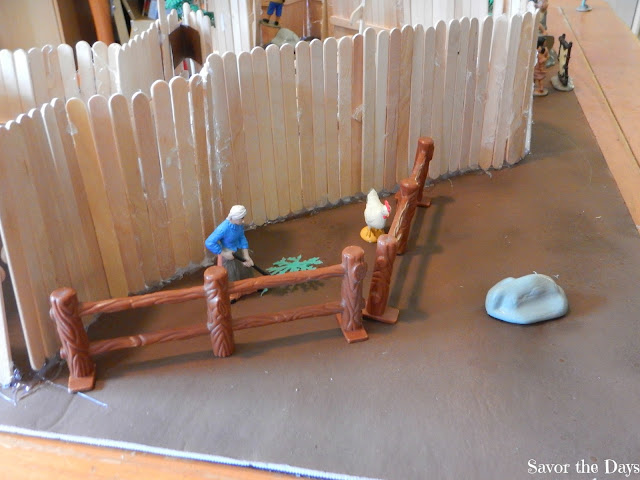 The colonist with an axe was cutting down the trees but the kids even made a pile to cut up popsicle sticks to look like wood that had already been chopped.  I'm so proud of the level of detail they put into this project! 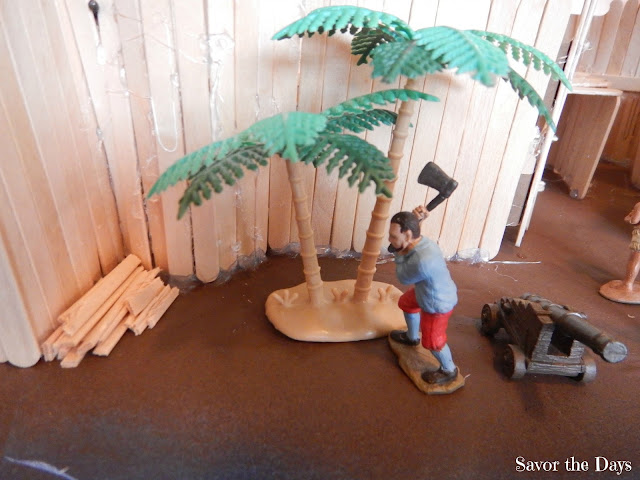 They had fun playing with the figurines and acting out different stories.  Some with historical accuracy.  Others that were just plain silly. 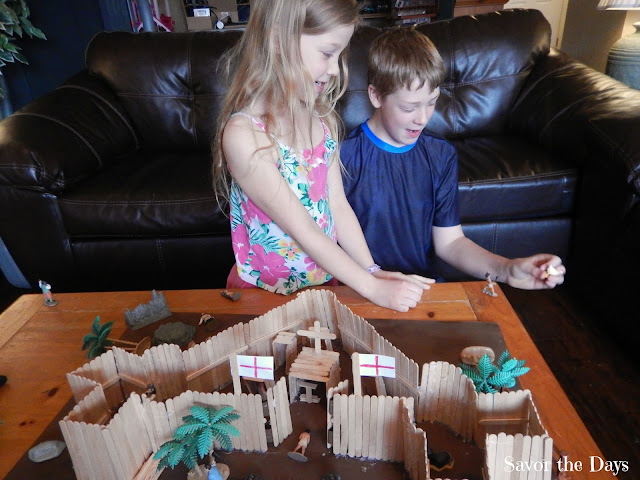 at March 08, 2017
Email ThisBlogThis!Share to TwitterShare to FacebookShare to Pinterest