The Hobbit at the ACT - Opening Night!

July 11, 2014
Tonight is opening night for The Hobbit at the Actors Conservatory Theatre!

Nicholas auditioned for the part of Gollum (also known as Smeagol).  The auditions took place during a crazy time in our lives when we were living out of a hotel.  I remember feeling terrible that we had been so distracted with other things that we had not spent much time helping Nicholas prepare for his audition.  He did great but didn't get the part he hoped for.  Instead he got the part of Bifur, one of the 13 dwarves who go on a mystical adventure with Bilbo the Hobbit and Gandalf, the great wizard.  He loves his part.  He is on the stage for almost the entire play and has many lines and lots of songs, choreography, and even a battle scene.  What a blessing in disguise that he didn't get the part that he had hoped for!

The ACT starts each production with a family potluck.  It's always quite a spread and it is a fun way to get to know the other actors and their families. 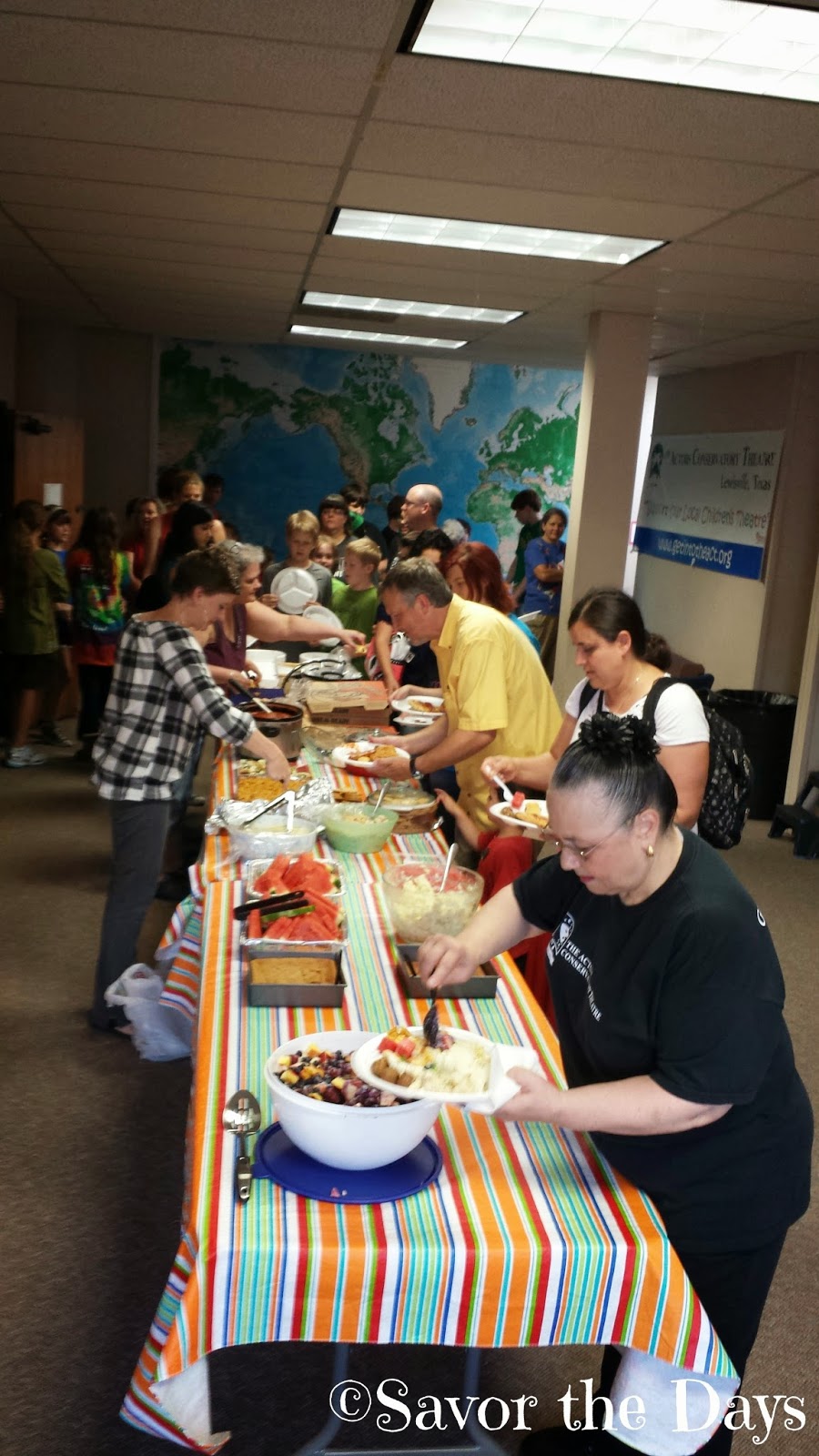 We wimped out and brought pizza but some people got really creative and brought Hobbit-themed food.  Our favorite were the little meringue and chocolate mushrooms which apparently Hobbits really love. Yum! 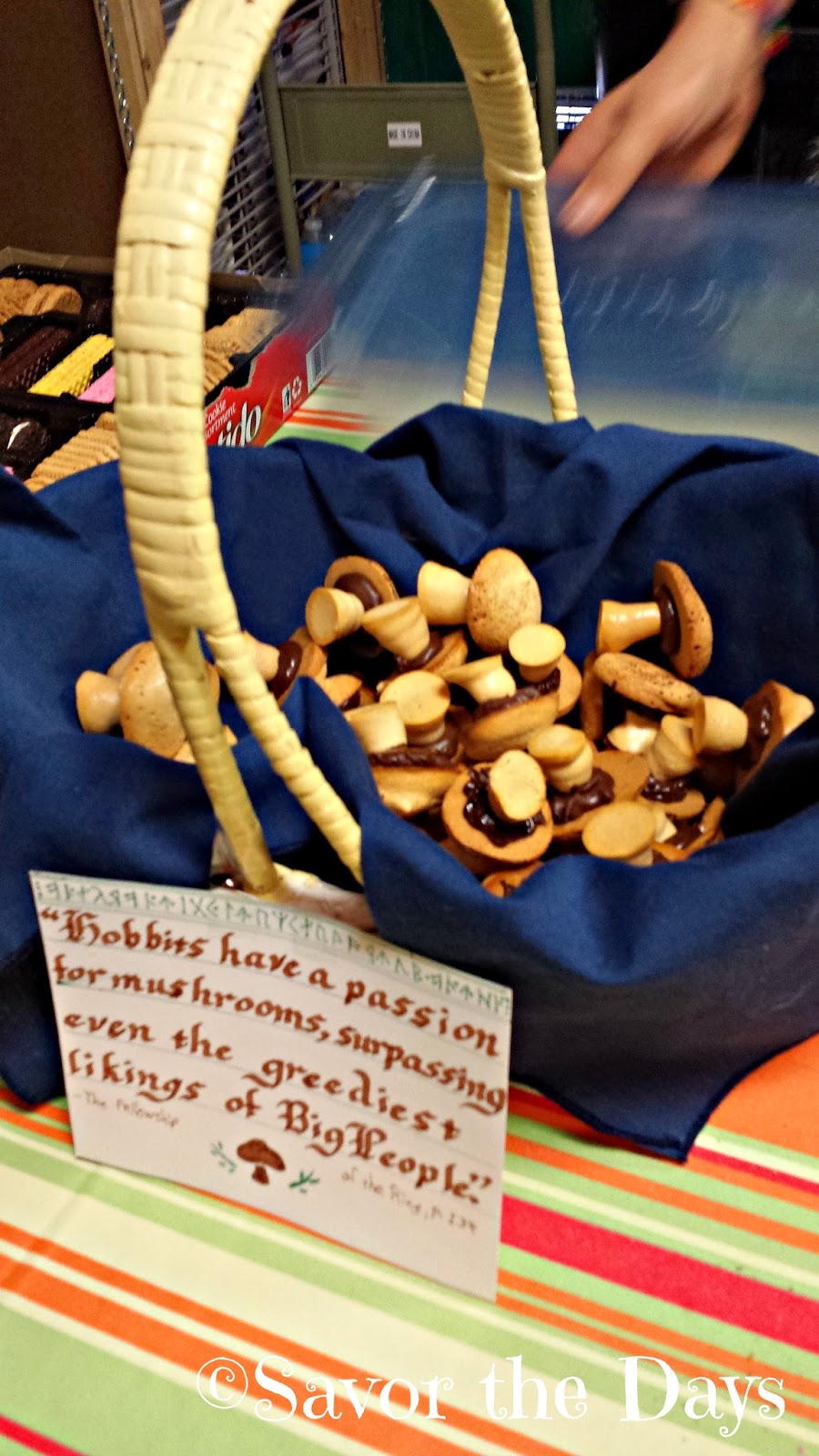 After the potluck, the director, Ms. Joe Ann, talked to us about the story of The Hobbit.  She also told us that she had actually corresponded with J.R.R. Tolkien, the author of The Hobbit, while he was still alive.  He was living in England and she wrote to him to ask his permission to write and produce a children's play based on The Hobbit.  Tolkien thought this was a wonderful idea.  He said that The Hobbit was read by students in England by age 8 and he was disappointed that children in America didn't read it until their high school years, if at all.  He was excited that she wanted to introduce the story to elementary students in a theatrical way. 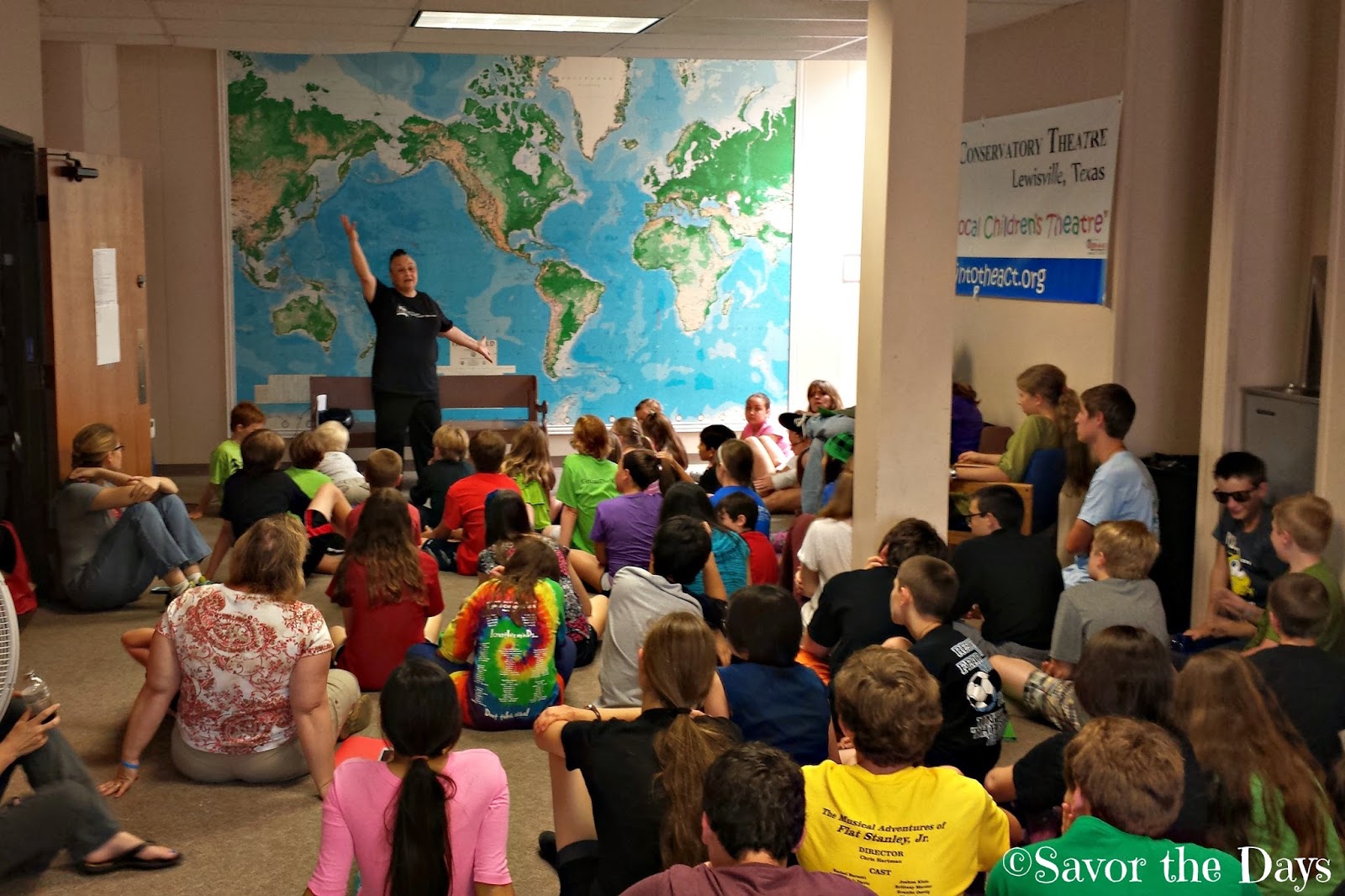 As usual, Stuart and I have been very busy helping the production behind the scenes.  Stuart has spent many evenings and weekends building an amazing set with platform and sliding door that the dwarves and other characters will crawl across during the show.  I've been working on props.  They had an old copper tea kettle that they bought at a thrift shop that was dull with tarnish and I learned how to polish it to shine like new.  I've also worked on painting walking canes, weapons, making old maps, and more.  Here is one of my painting projects.  They had some old yellow plastic mugs that they wanted to look like small wooden barrels.  I love being able to help give these old random things new life on the stage. 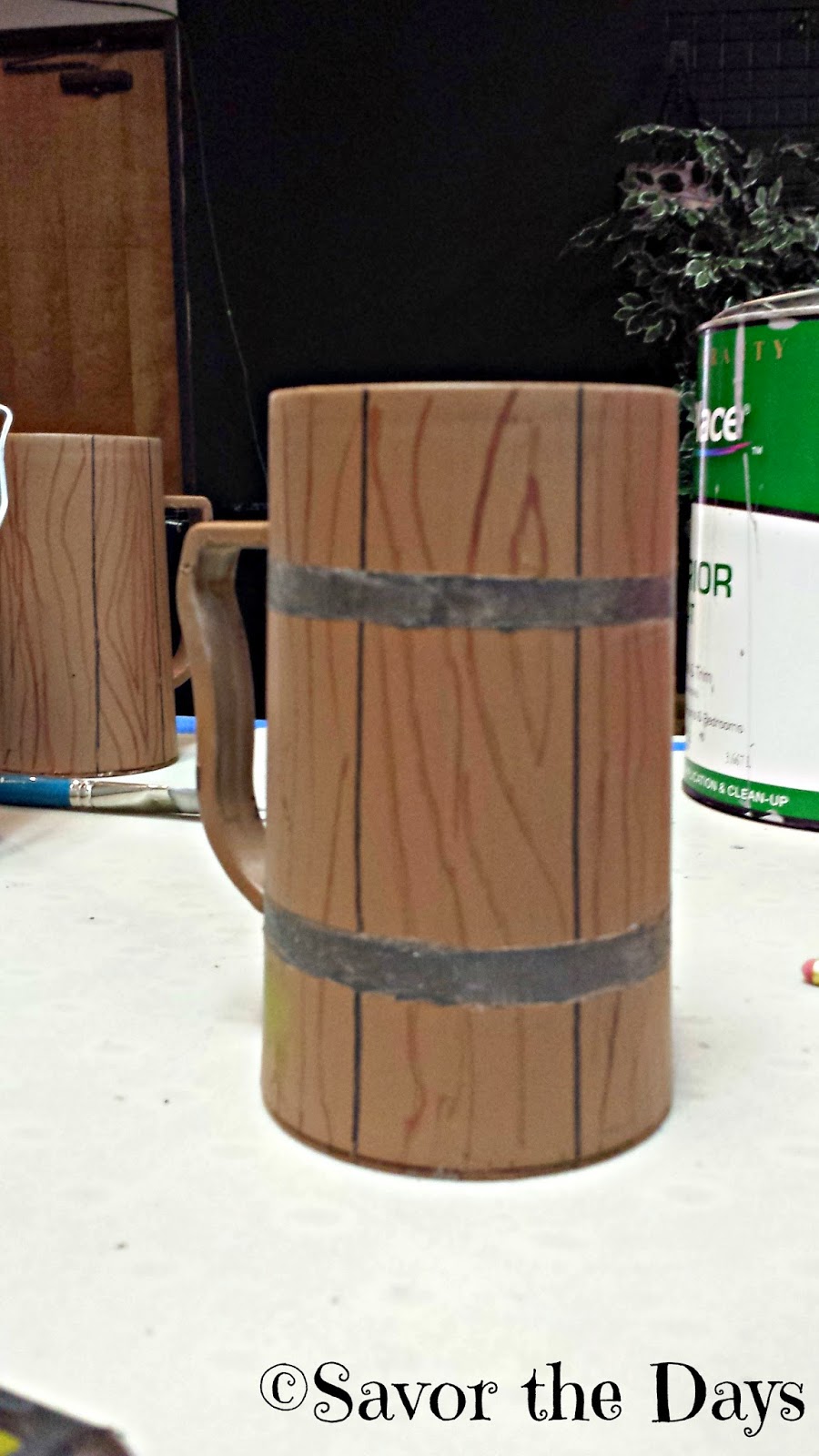 We were even able to donate a big piece of light brown carpet that used to be in the playroom to make a big rock for the stage.  They placed it over a frame and added some paint accents to it and voila!  Instant rock!  This picture was taken early on.  They have even added more finishing touches to it to make it look even more like a rock.  So cool! 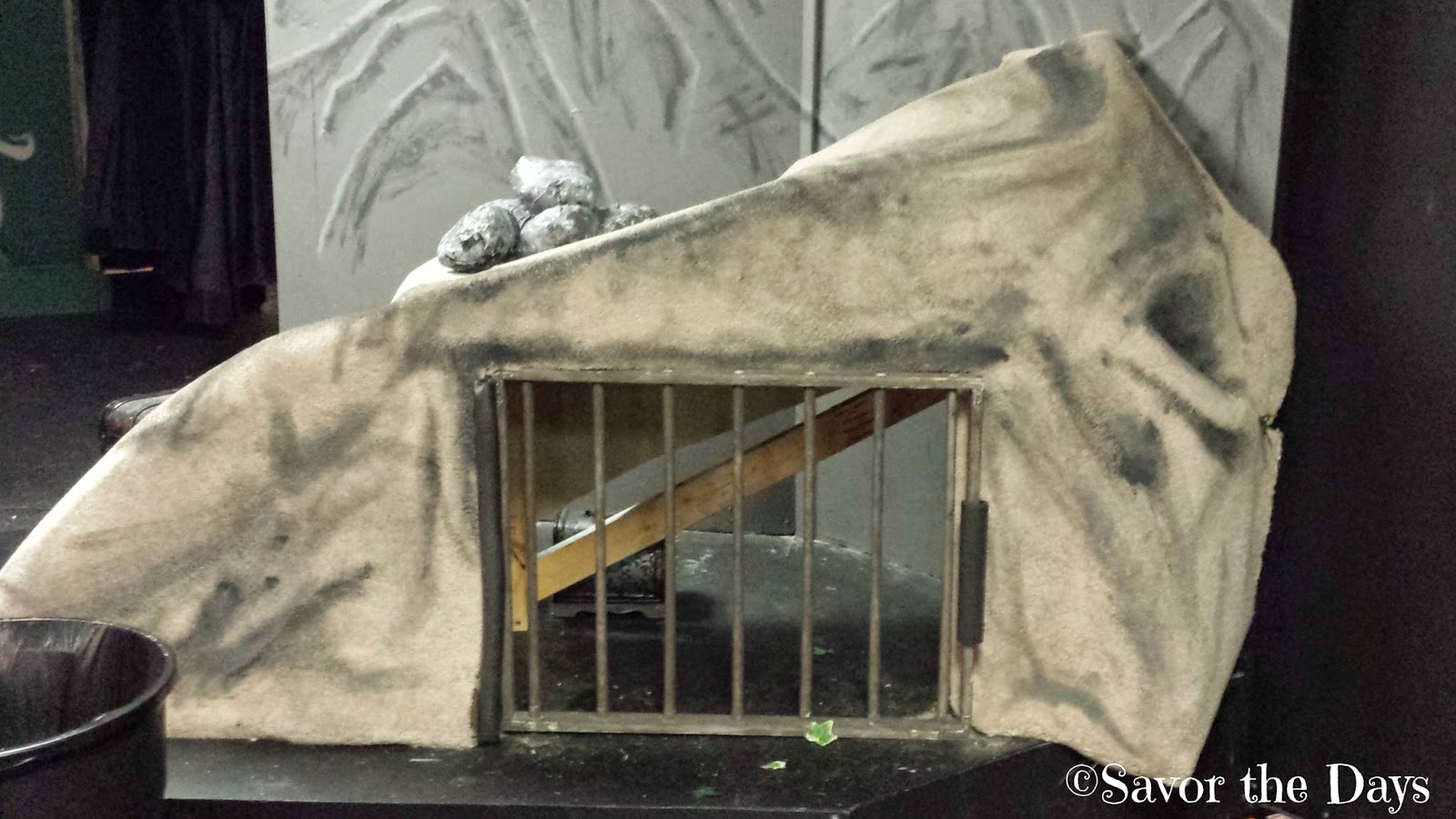 Nicholas has a simple costume as a dwarf.  He will have some simple makeup but I don't think he has a wig or facial hair.  He's happy about that! 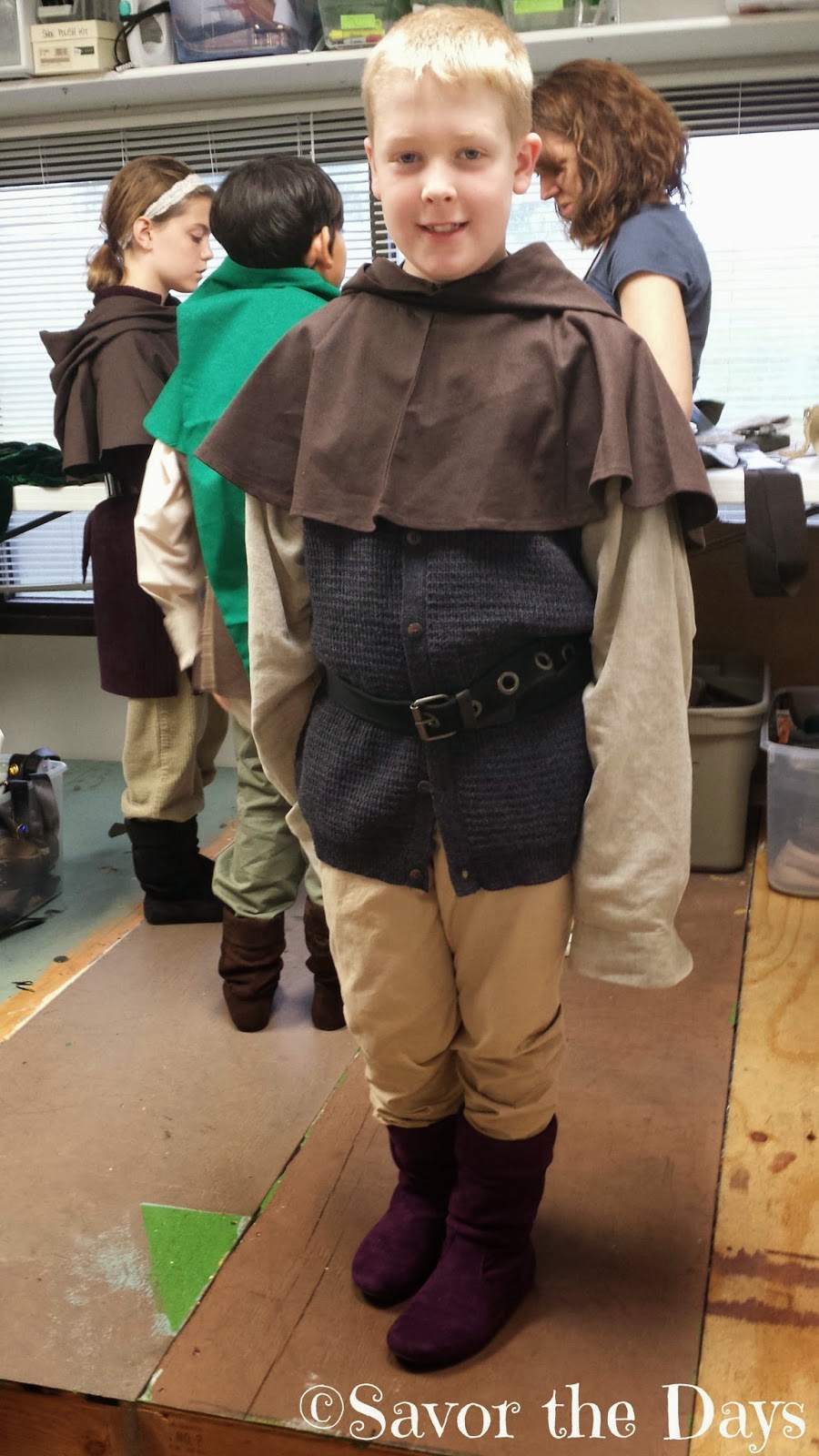 Here is a little sneak peek video of one of the songs early in the play.  It's called Chip the Glasses, Break the Plates.  I took this video at the dress rehearsal last night.  Here the dwarves have just invaded little Bilbo's neat and perfect house and made themselves at home.  They are supposed to be cleaning up after they helped themselves to a meal.  They are singing about being careful with the dishes because Bilbo hates chipped glasses and cracked plates.