The Blue and Gold Banquet is a celebration of Cub Scouting. Essentially, it's a birthday party for Cub Scouts, the organization. It is also a way to say goodbye to the departing Webelos dens as they will bridge on to their Boy Scout troops at the next Pack Meeting.

The theme for this year's Banquest was western. Nicholas had to wear his scout uniform but the rest of us had fun getting dressed up a little. 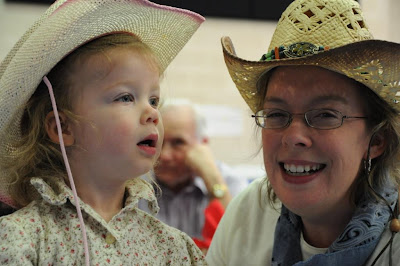 It was a good thing that Stuart looked like a sheriff because he certainly had to play the role. Here he has a vice grip on the girl just to keep her in her seat and not running all over the place. 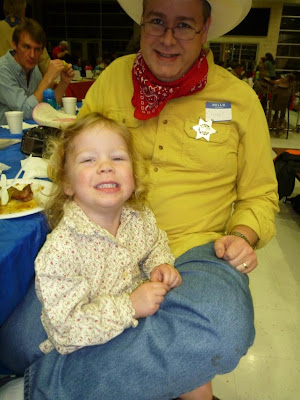 We are proud of Nicholas and how much he has gotten out of Cub Scouts this year. He was chosen to be in the Color Guard to present the flags at the beginning of the banquet. 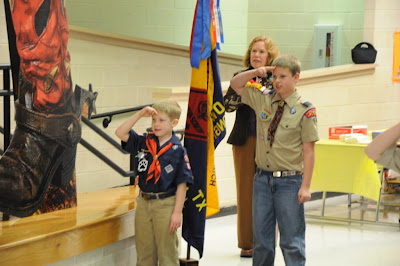 And here is our awesome group of boys from Pack 62! Nicholas is on the front row, 5th from the left. 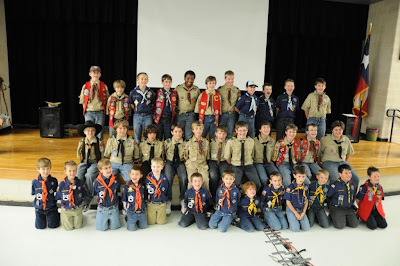 The banquet was nice. The food was great and there was a lot of macarena and chicken dancing going on.

And the fire alarm was only pulled for fun once!
at March 06, 2011
Email ThisBlogThis!Share to TwitterShare to FacebookShare to Pinterest