Darth Vader? No.
Teenage Mutant Ninja Turtle? No.
Wizard? No.
Skeleton? No.
Owl? No.
Power Ranger? No.
Train Conductor? No.
Knight? No.
Pirate? No.

What? He has enough costumes to provide a wardrobe for an entire play but he doesn't have a community helper costume? So off to the store I went. Fortunately, it's close to Halloween so I had plenty to choose from. I found a really cool police costume that comes complete with some fun toys like handcuffs, a pad of tickets, a whistle, a badge, and a walkie talkie that makes a siren noise. Nicholas was so excited to try it on when he got home from school yesterday and then he wouldn't take the darn thing off. He wore it all day. 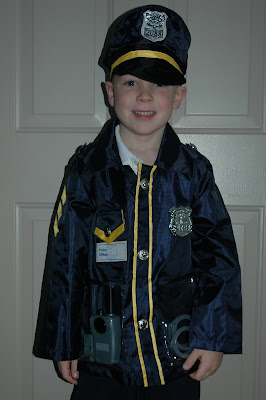 So of course he was excited to get out of bed this morning and put his police costume back on. He wore it was we walked to school and told the crossing guards all about the walkie talkie that makes a siren sound. He had a smile from ear to ear as he waved goodbye to me and walked into class.
at September 18, 2009
Email ThisBlogThis!Share to TwitterShare to FacebookShare to Pinterest