I've always liked Chick-Fil-A because they are Christian-based and family-oriented. This morning, our local Chick-Fil-A hosted a free breakfast for kids that came in wearing their pajamas. What a fun idea. 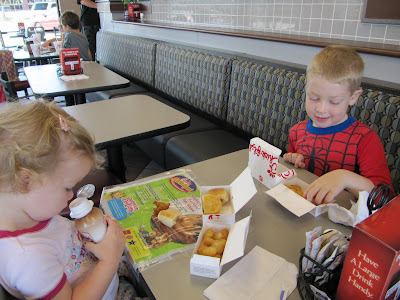 After chowing down their food, the kids went to play on the indoor playground. I've just got to point out that my son's pajama choice was completely his own. This Spider Man shirt is his favorite pajama top because it has black webbing attached between the sleeves and the sides of the top. He doesn't care that this top is about 2 sizes too small for him. He also doesn't care that we no longer have the pajama bottoms that match this top. He will put any pajama bottoms together with his Spiderman top, even the olive and beige dinosaur-themed bottoms. 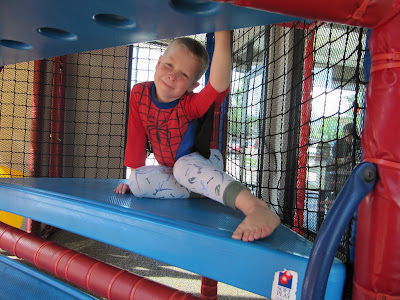 While I love the idea of wearing pajamas in public, I would prefer to dress my kids in their cutest (and matching!) pajamas if we're going to wear them in public. I asked Nicholas if he wanted to change pajamas but he didn't. He was excited about what he had on. I managed to fight that compulsion to make him change which was a bit hard for me to do. But it's getting easier each day. I think I've been forced to mellow a little now that we have two kids. When it was just one kiddo, I had more energy and was more "on the ball" and worried about that polished look. Now I've got two and I'm just too tired to worry about the little things anymore. As long as they are happy, fed, safe, and learning, who cares what they wear? I personally think that letting go of all that silliness is a good thing, for myself and my kiddos. You've got to focus more on the big picture things that are really important and I guarantee that five years from now I won't care what kind of pajamas my son wore to Chick-Fil-A.

Rachel tried to climb up the big playground but she never wants to go very far. I think this second step was as far as she went today. She seems to get scared and scurries right back out. 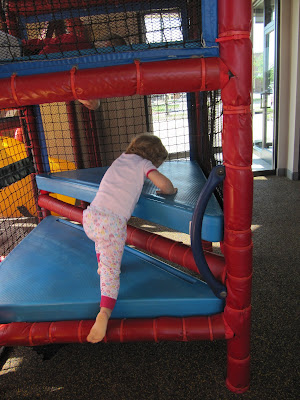 But she did have fun in this little play area. 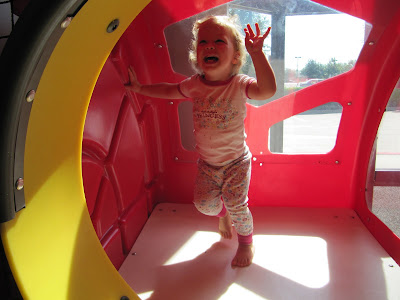 And of course, the two of them had fun hiding, playing, and laughing together. 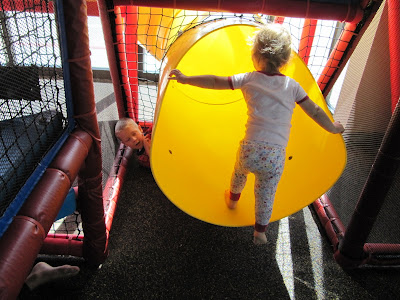 ...and shouldn't that be what's really important to me this morning?
at August 21, 2010
Email ThisBlogThis!Share to TwitterShare to FacebookShare to Pinterest