A few years ago, Santa brought Nicholas a Spiderman scooter. It has been well used but Nicholas has gotten too big to be able to ride on it. So for his birthday, he got a new Razor Scooter which he absolutely loves. He usually tries to hang on to old toys even after he has outgrown them but he told me I could get rid of his Spidey scooter on Freecycle because some other little boy would love to have it. I love that he appreciates giving things away on Freecycle so that they can be reused by others instead of just thrown out.

I got the Spidey scooter out and cleaned it up before posting it on Freecycle. But just before I got rid of it, Rachel discovered it and picked it up like she knew what she was doing. Next thing I know, she was "riding" it around the house like a pro. Now keep in mind that her idea of riding it was to straddle it with both feet and just push it around as she walked. 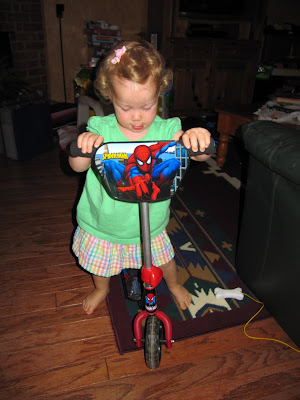 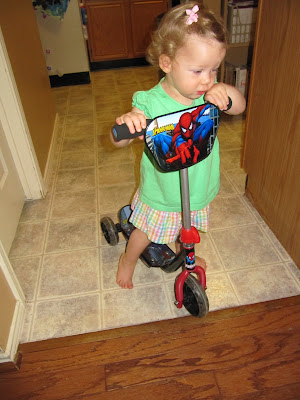 She did start getting bolder and tried to put her foot on up the scooter at which time she promptly fell over with the scooter on top of her. As cute as she was walking around with the scooter, I had to get rid of it because I didn't want her to get hurt with it. She tries to do everything that she sees big brother do and she gets frustrated when she physically can't keep up with him. Just be patient, little one. Before you know it, you'll be scootering, and biking, and climbing everything just like Nicholas.
at May 13, 2010
Email ThisBlogThis!Share to TwitterShare to FacebookShare to Pinterest