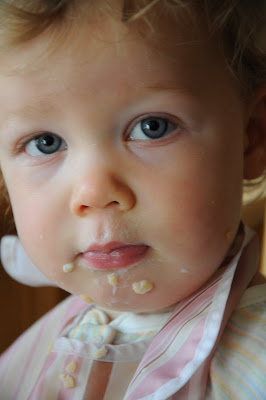 Rachel is very good at feeding herself. She isn't nearly as messy as the boy was at this age. She is an accomplished cereal self-feeder (or "shoe-ia" as she calls it). This morning, she decided to play in the milk left in her bowl after eating her Rice Krispies. She had fun splashing her fingers in it and giggling the whole time. 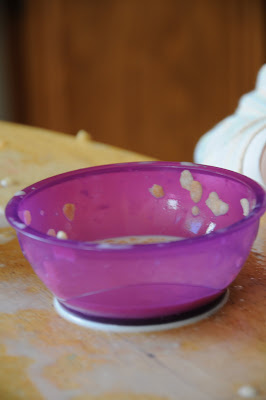 Her messes are usually minimal while she is eating. But when she is done eating, watch out. For some reason she thinks that when she is done eating that she shouldn't have to look at the food anymore. So when she has eaten all that she wants she will usually throw her bowl, spoon, sippy cup, handfuls of food, etc. on the floor before announcing that she is all done (or as she says, "Ah None"). But being OCD like her mom she then gets upset when there is a mess so she will announce "Mess! Mess! Mess!" until someone acknowledges her and cleans up the mess or gives her a towel to clean it up herself.
at May 09, 2010
Email ThisBlogThis!Share to TwitterShare to FacebookShare to Pinterest