Santa Claus Is Coming To Town!

November 24, 2009
We had a wonderful time at Casa Manana Children's Theater in Fort Worth where we saw the play, "Santa Claus Is Coming To Town". Nicholas was excited to see the giant inflatable Santa outside the theater. 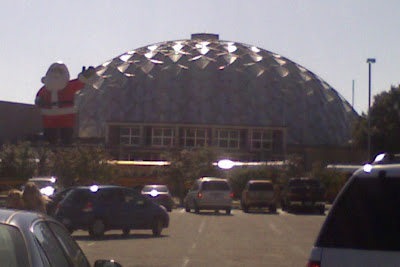 These pictures are all taken with my cell phone which for some reason was acting up while we were in the theater so I didn't get any pictures of my two sweet children in their Christmas best standing in front of the Christmas tree. :( As always, I had brought the good camera with me but didn't realize until I was about to take a picture that I had left the battery on the charger at home. I put it on the charger last night because I wanted to be sure I would have plenty of battery to take some really great pictures. So much for that plan!

Stuart chuckled and wished me luck when I told him that I was taking both of the children to see this show. He knows how fidgety Rachel is. She doesn't like to sit still much anymore and is very squirmy and wiggly and wants to always be on the move. The show is about 80 minutes long and we had to arrive about 45 minutes before the show started so we could meet up with our Early Childhood PTA friends and get our group discount. I must admit that I was quite worried too. The lobby at Casa Manana can be quite crowded just before a show so I knew I wouldn't be able to let Rachel just walk and crawl around like she would want to do. Just holding her in the lobby for 45 minutes before the show could bring her to a meltdown. Then the thought of holding her in my lap for 80 minutes of the performance didn't seem likely at all. I had already prepped Nicholas that we might have to leave the show early if it just wasn't working out.

Fortunately, all of our worries were completely unfounded! Rachel was mesmerized by the Christmas tree, lights, and chatter in the lobby so she did great. Some friends of mine even took our picture with their camera as the three of us stood in front of the tree. Nicholas, of course, had fun talking with his friends. Then it was time to enter the theater. How long would we make it into the show before I had to excuse myself because of Rachel's squirming and fussing? I made sure to sit next to a friend of mine who I knew wouldn't mind letting Nicholas stay in his seat next to them for the show if I had to step out and let Rachel get her wiggles out somewhere in the lobby. But she did fantastic! I'm sure the fact that our seats were second row, center stage helped to keep her attention focused on the action on the stage. She was quite cute because she kept waving to the actors when they looked in her direction. She had a great time - which meant that Nicholas and I were able to have a great time too. The show was great. The story was full of fun as well as a whole good-guy-bad-guy drama which Nicholas always loves. There were wonderful costumes and props, great acting, and lots of fun songs and dancing. Of course I have no pictures of it because of my whole camera fiasco! Being with friends was wonderful, and having our first taste of Christmas spririt for the season was fabulous!

I had planned to take the kids to a great little deli and pastry shop called the Swiss Pastry shop. Oh, their pastry cases have the most beautiful treats in them - you ALMOST hate to eat them. I finally found my way there (I ALWAYS get lost in Fort Worth) only to find that they are closed on Monday. This wouldn't have been such a big deal if I hadn't talked it up with Nicholas so he would think it was more exciting that going to the McDonald's playground for lunch. Of course, I don't go to Fort Worth much (probably because of my previous statement about always getting lost there) so I couldn't think of another fun place to go to for lunch. Finally I came up with Krystal for some burgers. Not nearly as exciting as a pastry case but I thought Nicholas would get a kick out of the mini burgers. I was right. 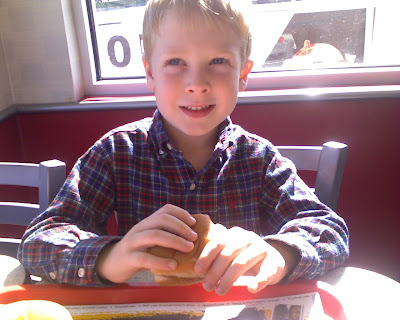 I don't eat at Krystal very often so I couldn't really remember how big the burgers were and how many Krystal burgers might be needed to accomodate a regular-sized burger appetite. I told Nicholas that they were mini bite-sized burgers. Nicholas informed me that he was going to eat 6 burgers. So I figured with myself and two kids I should get the Sackful of Burgers deal which gave us 12 burgers, two drinks, and two fries. We missed out on the whole sack deal because we didn't get it to go but I think our Trayful of Burgers was still quite impressive. 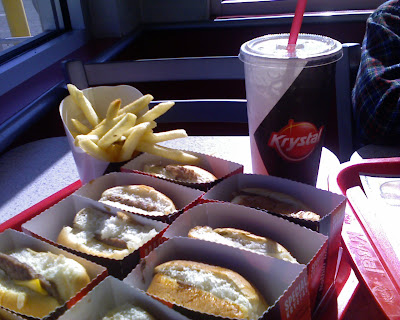 That was a bit too much. I think we ended up eating 4 burgers between the three of us! This clearly means that Nicholas DID NOT eat the 6 burgers he promised to eat... 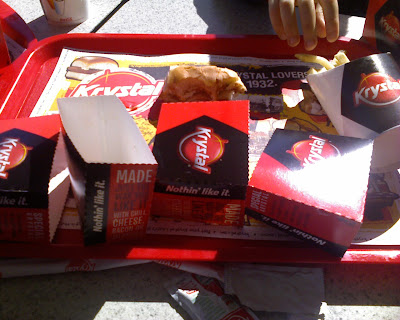 Rachel tried a cheeseburger for the first time. Even though the burgers are small, I still made them even smaller for her. She got bite-sized burgers. She still only has her four front teeth so I worry that she can't chew her food very well so everything she gets is small and broken up. She didn't mind. 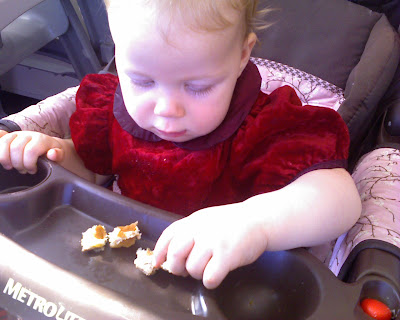 As a matter of fact, she got quite cozy eating her Krystal bites. Here she is in her stroller, in her Christmas dress and stockings, eating her Krystal burger with one leg propped up like she's sitting in La-Z-Boy chair! Looks like I have a long way to go on teaching her how to act like a lady :) 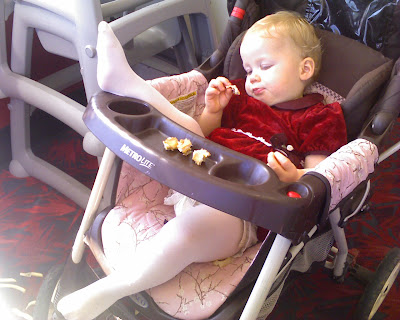 I highly recommended going to Casa Manana for "Santa Claus Is Coming To Town". You won't regret it. And if you have a chance to go to lunch, and it's not on a Monday, then make your way down to the Swiss Pastry Shop at 3936 W. Vickery Blvd which is somewhere south of Casa but don't ask me for details because I took the really, really, long way to get there!