This week Nicholas' class celebrated the first 50 days of school by dressing up in an outfit from the 50's. We didn't really have a 50's costume but for guys it is really quite simple - sunglasses, white t-shirt, and rolled up jeans. I think Nicholas pulled off the look pretty well. Although he had no idea what he meant when I asked him to give a thumbs up like the Fonz...aaaayyyee! 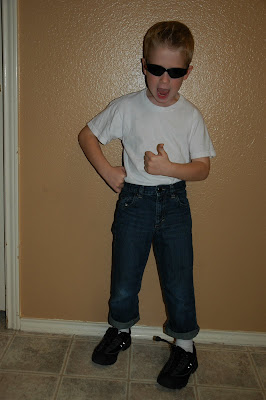 We recently had our parent-teacher conference to go over Nicholas' progress in the first six weeks of school. His teacher says that he is very polite, kind, and has lots of friends. Awww. She also said that he is above average for his class. He is always the first to answer questions and he even answers the tough questions that she throws out there thinking no one will get them. She mentioned the possibility of him being tested for the gifted and talented program in the future. All good things that a mama loves to hear. However...

Nicholas' behavior is not so great. His teacher said that on a scale of 1 to 10 with 1 being a perfect child and a 10 being one that needs a lot of re-direction and correcting, Nicholas scores an 8. He is excessively talkative. He fidgets with things near him when he is supposed to be listening to the teacher. When he is in the bathroom at school, he studies the arrangement of the colored tiles on the floor and plays games involving stepping only on certain color tiles and avoiding others at all cost instead of returning to class. He rolls his thermos down the hallway just to see what will happen. I know he is a challenge to manage. It's not a surprise. The wrinkle on my forehead and the circles under my eyes announce to the world that I'm the mama of a spirited little boy. But it was still hard to hear her tell us all the things he was doing instead of being the perfect little well-mannered boy I envisioned him being at school. But honestly the teacher was very understanding and encouraging even as she was telling us this. She explained that her daughter was just like this - above average academically but always having behavior problems. She said that he may just need more challenges and that is why she thinks the gifted program might be a good outlet for his creative energy. I've since heard someone say that bright children don't let themselves get bored. If they are not challenged by what is going on in the classroom then they will just find something else around them that fascinates and intrigues their mind.

He isn't going to be tested for the gifted program until he starts 1st grade next year. But in the meantime I've gotten him some 1st grade workbooks and some empty journals for drawing and writing in hopes of keeping him challenged in the classroom when he completes his in-class work early. I've also suggested to the teacher that he might be able to take on a role of peer model in which he could help other students when he has finished his work.

I sometimes struggle with just accepting my child for who he is and not what I want him to be. He is so sweet and so bright. I should be able to just be proud of that. Instead I'm disappointed that he is so talkative, loud, and active - that he isn't the role model for good behavior and the teacher's pet. I need to open my eyes that he is not the quiet studious type like me and that's ok. He needs to follow the rules and obey his teacher but he also has to be able to express himself in his own way and find delight in learning by testing the world around him. If we can keep from squashing his spirit and trying to fit him into a mold that we want him to be, then this little guy will do amazing things with his life and make great contributions to society.
at November 05, 2009
Email ThisBlogThis!Share to TwitterShare to FacebookShare to Pinterest