Reliving Old Memories with My Children

Beware that anytime I go to Baton Rouge I may experience moments of nostalgia and you'll find me taking my kids to see all the neat things that I remember as special from my childhood.

For Christmas, Dad got us a family membership to the Ft. Worth Museum of Science and History because we go there all the time. I was excited to find out that our membership is good for free admission to lots of other museums across the country, including the Louisiana Arts and Science Museum in Baton Rouge.

I remember Dad taking my brother and me to this museum when we were little. I love that they still have this giant totem pole. It was one of my favorite things there. Apparently, Rachel really likes it too. 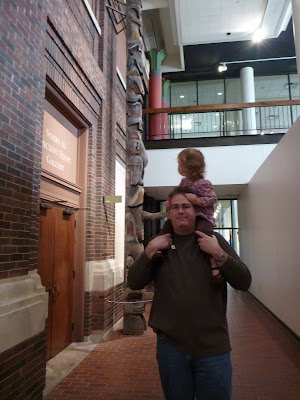 We spent a lot of time in the children's science museum which is full of hands-on interactive activities for kids. 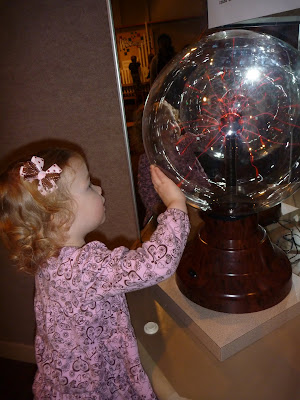 Nicholas found some neat pictures of animals that when you put them up to the light box, you can suddenly see their skeletons. Cool surprise! 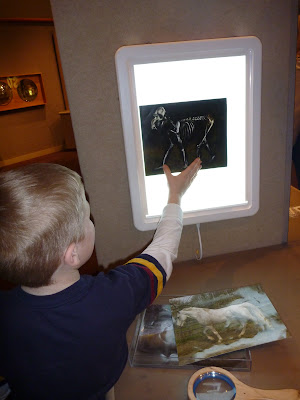 Nicholas and Rachel both had fun with mirrors. 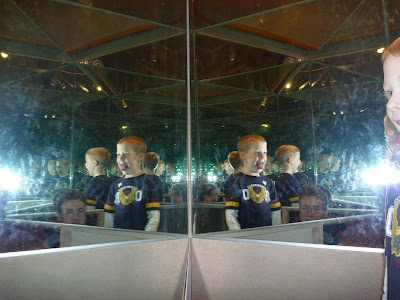 We ran across another museum item that I recall from when I was little. This scary mummy of a young man that I didn't really like at the time but now I find fascinating. 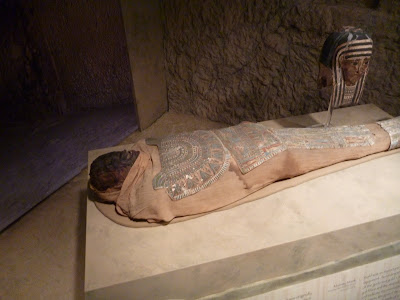 It was brought to the museum in 1964. In the past, it was considered acceptable to unwrap mummies to learn more about them. Now we use radiology and CT scans to
discern age, sex, and medical history. In 2007, professor Mary Manheim of the FACES laboratory at LSU took over an investigation to learn more about the mummy.

Stuart and I are proud to say that we took an anthropology class together taught by the one and only, world renown Professor Manheim. She is an incredibly passionate teacher and made learning so much fun. We've enjoyed hearing about her in the news over the years.

Anyway, Professor Manheim corrected the erroneous belief that this mummy was a female. I recall learning that this mummy was a female back in the 1970/80's. An examination of the bones and teeth determined that he died between the ages of 25 and 32 years old. The FACES lab used bone structure and other evidence to recreate a conceptual drawing of the mummy's face seen next to the xray. 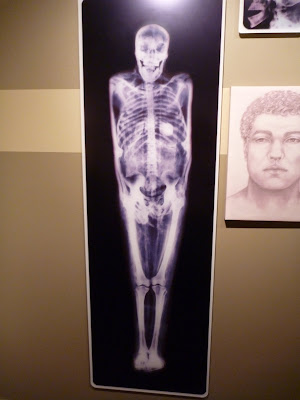 It was also discovered that the brain was still intact and several ribs were fractured indicating that there had been a crushing blow to his chest. Further CT imaging in 2007 determined that this mummy was not mummified in the typical sense. The mummy's organs had not been removed by embalmers and instead were still intact. The body appears to have dried out naturally in the dry, hot Egyptian sun rather than through embalming methods so all that was needed when it reached the embalmer was the simple wrappings. The final conclusion is that the mummy is from the Ptolemic Period (305-30 B.C) in Thebes.

Yes, I go on and on about the mummy. I know. It's just so exciting to see something that was so memorable to me as a child and then to learn all that's been discovered about it since then. Mary Manheim made anthropology so exciting for me that I really wanted to be Indiana Jones out there in the desert digging up bones and ancient treasure. Of course, you can just add that to the list of many other things I thought I would be when I grew up...professional ballerina, Chinese (I can't explain that one), concert pianist, manager at Wendy's (Dad likes to remind me of this one!), pediatrician, surgeon, world traveler, Nobel Prize winner, author, psychiatrist, microbiologist, and finally, a therapist in private practice. Yep, I'm none of these. I'm a married stay-at-home mom with a wonderful husband and two beautiful kids that I homeschool and run around town to karate and Gymboree class. I think God's plan for me couldn't have turned out better.

Boy, did I digress!

We spent a lot of time in the space section of the museum.

I like this cool display of star constellations using pictures of the characters and little lights to represent the stars. I think I could make something like this for Nicholas using some graphics from the Internet and old white Christmas light strings. Sounds like a neat project but I'll never find time for that one. 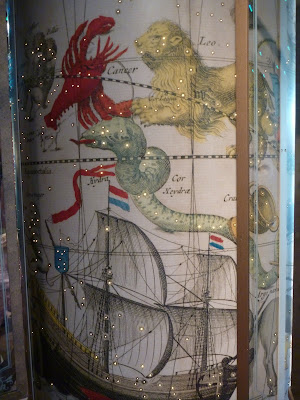 Rachel learned about planets revolving around the sun. 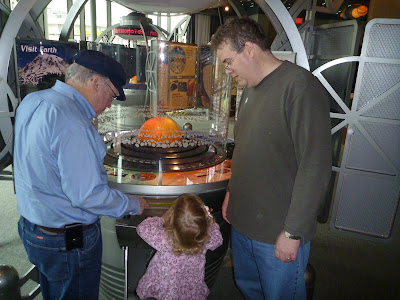 The museum has a great hands-on children's play area. I don't remember such cool interactive stuff here when I was little. 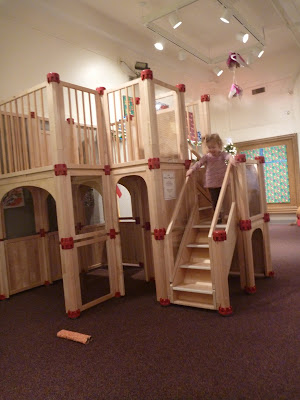 Here's a random picture of my hubby as he learned up next to a light box in the children's area of the museum. I like the way the light just softly highlights his face. He would have all kinds of fancy photographer names for the lighting and how to make the lighting even better. I don't bother with all that. I just see a shot I like and I take it. 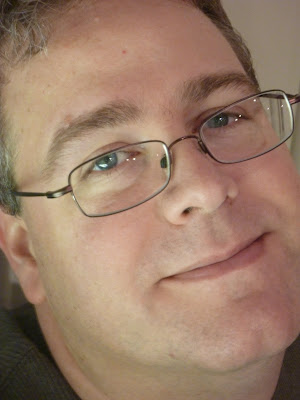 I just love being in downtown Baton Rouge. There's lots of things to take the kids to see and it always brings back memories of hanging out down here when I was a kid. I will always love the sight of the Mississippi River bridge because it's our landmark on our trip to say we've finally arrived. But to me, it's also very symbolic of being home again. 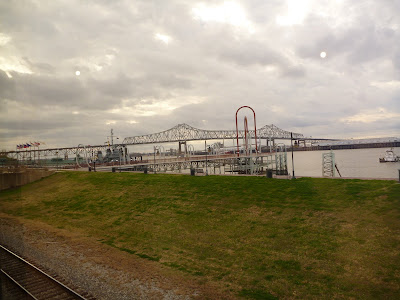 Of course, Nicholas loved seeing the old state capitol building. He said, "Look! They have a Medieval Times restaurant here too!" 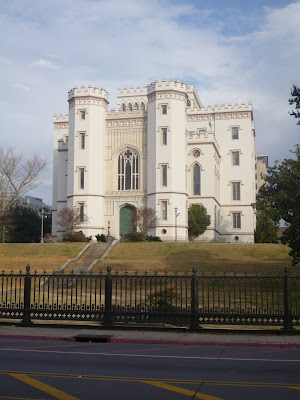 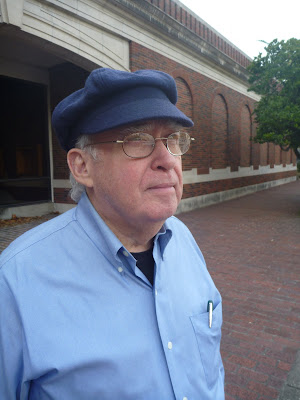 I love that he always took us to see cool stuff like this in our town as we were growing up. I have such fond memories of all of our outings. Maybe this is why I take my kids to see so many places around here. Hopefully some if it will stick and make a difference for them someday.

Ok, on to the next nostalgic memory. I didn't ask anyone if they wanted a treat but decided I would surprise them with a trip to Frostop for some old-fashioned root beer floats. 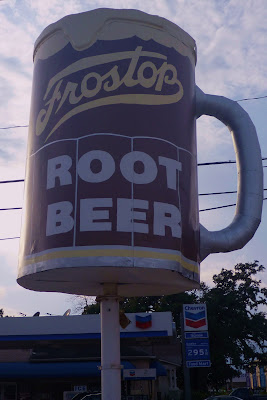 I remember coming here many times with my parents but also with my grandmother. We may have eaten real food here on occasion but what I really remember are those floats. I just love the old diner feel! 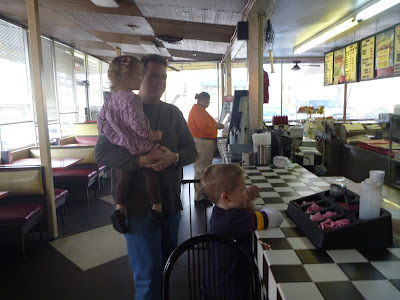 We each got a root beer float in a frosted mug. I decided to just let Rachel share mine with me instead of getting one for her since they are so big. 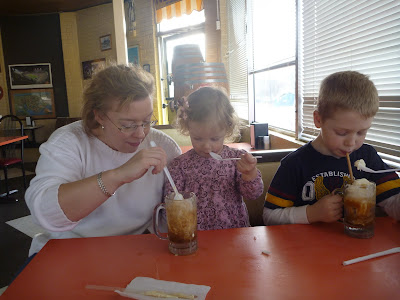 Big mistake! She let me have a few sips but pretty much finished off that whole mug by herself. Note to self, get the girl her own float next time. 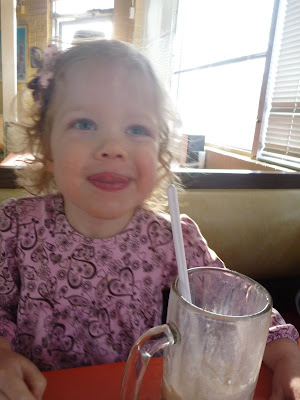 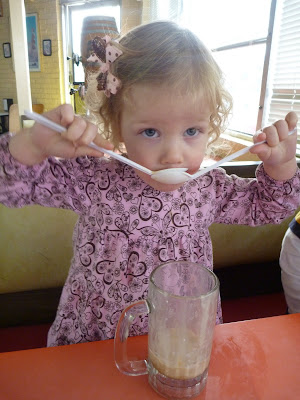 Of course, a trip to Baton Rouge just isn't complete without a quick run through my old stomping grounds of LSU. I just wanted to drop by and let the kids say "Hi" to Mike the Tiger. We took tons of pictures of the kids with Mike in his cage in the background but none of them came out well. Either the camera just focused on the fenced and blurred the rest or Mike was looking away or (imagine!) one of my children was looking elsewhere.

So instead here is a picture of Rachel as she watched Mike stroll around while I talked to her about tigers. Yep, that's all I have of Mike. 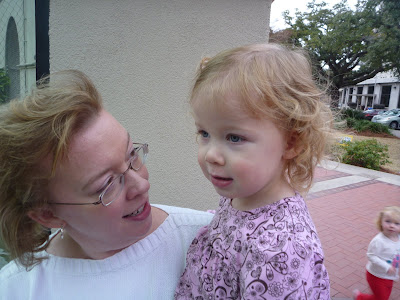 Unless you count the kids on the statue of Mike. Say cheese! 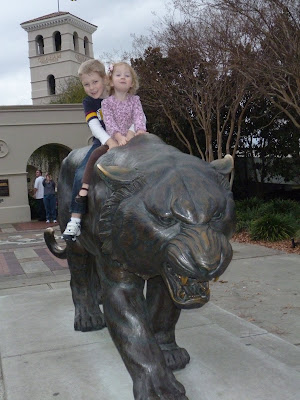 Just to wrap up this really long post, here's a video of my Dad and Rachel being silly together as we drove to LSU. Rachel has picked up saying "huh?" instead of "what?" when she doesn't understand what someone says. I hate to hear "huh", probably because my mom used to correct me all the time when I said it, so naturally I've started correctly my kids when they say it. I tell Rachel, "Don't say HUH. Say WHAT if you don't understand." So she decided to explain all of this to Granddad and the two of them just turn it into the silliest conversation ever.

Thanks for being like my kids and just putting up with me as I relive a few of my childhood memories!
at January 01, 2011
Email ThisBlogThis!Share to TwitterShare to FacebookShare to Pinterest