Today we visited the Interurban Railway Museum in Plano. 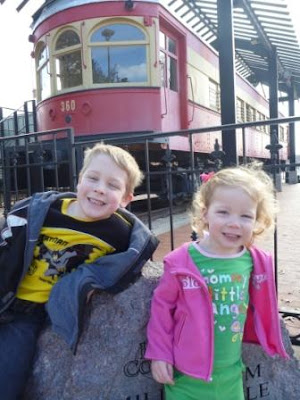 From 1908 to 1949, the Texas Electric Railway provided transportation from Denison to Waco, with a hub in Dallas that allowed for connections to Fort Worth, Cleburne, and Denton. This allowed previously isolated small towns to have easy access to the larger cities in their area. In 1914, the railway teamed up with the US Post Office and began carrying postal workers onboard to help get mail delivered along the route. But with the invention of the automobile, the need for the railway declined and this piece of history ended with its last run on December 31, 1948. 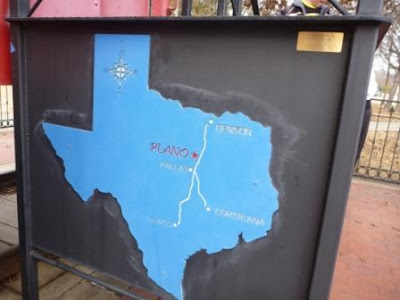 The Interurban Railway Museum in Plano is a neat little step back in history. We learned about the history of Plano including the Indians that were in this area. I was excited that this was included because Nicholas and I had spent a lot of time recently learning about Indians as part of his history curriculum. 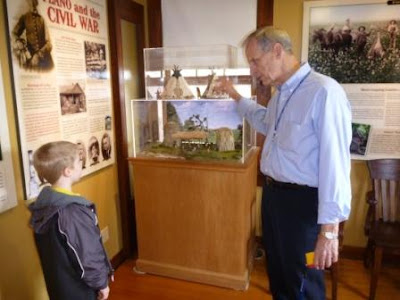 There were several hands-on kid-friendly activities that taught about trains and railways. We did each of them but my kids were most drawn to the model trains running around the tracks in the model train display. Choo! Choo! 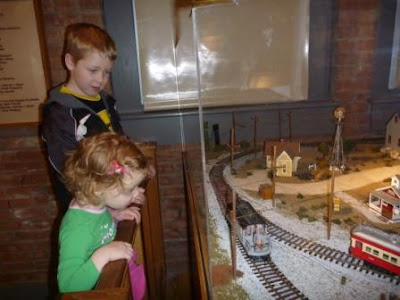 Then it was time to tour a real railway car. This particular car had been sold to someone who used it for a storage shed! But when the city of Plano decided to create this museum from one of the original railway stations, the car was located and restored. Unfortunately the museum only has a few of the original passenger seats. What a neat piece of history! 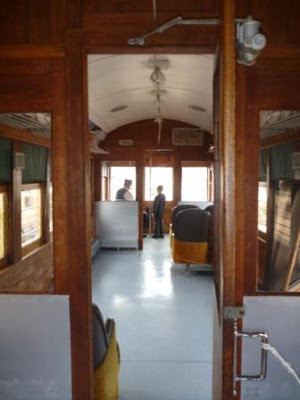 Our tour guide was Mr. Tom. He was dressed in a motorman uniform from back in the day. A motorman was similar to what we think of as a conductor on a train. Mr. Tom talked with Nicholas a lot and really took his time with us. 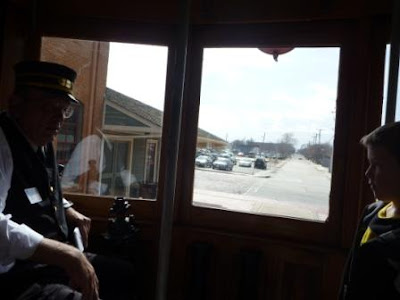 I enjoyed looking at all the old ads along the walls. This one particularly caught my eye because I love photography but also because I think my Dad actually had an old Brownie camera when he was young. 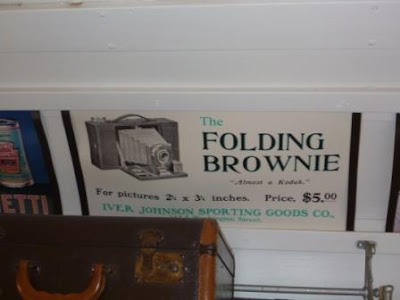 Mr. Tom showed us the sign that could flip up to mark which end of the car the white people and black people should sit. It made me uncomfortable to see such a thing even though it is a part of our country's history. 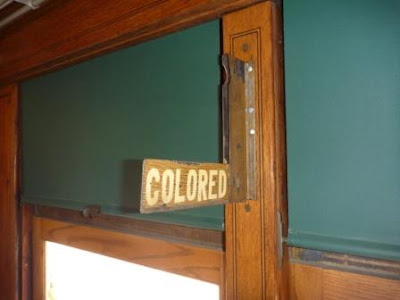 I tried to get a picture of the kids with Mr. Tom. I guess technically I did. But as you can see, regardless of how many times I called Rachel's name to try to get her to look at the camera, she preferred to play with piece of track on the ground. 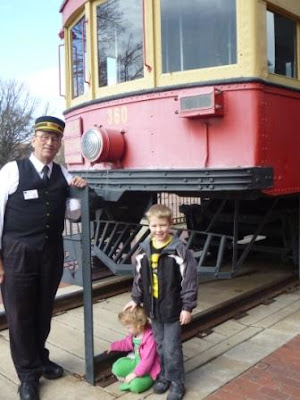 Right next to the Interurban Railway Museum is Haggard Park complete with swings and playgrounds. It was a pretty day and we wanted to be outdoors so, of course, we had to check it out.

In addition to plenty of swings, the park has two distinct playground areas. I love parks like this because each kid has their own age-appropriate place to play. 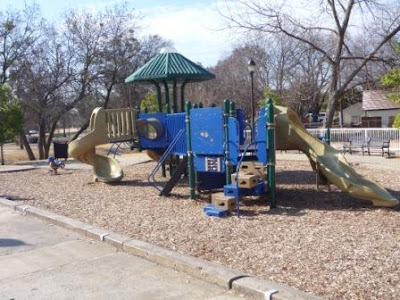 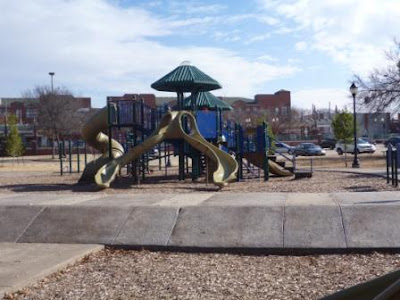 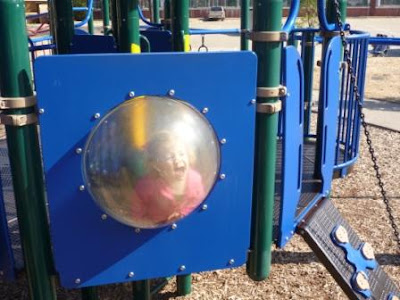 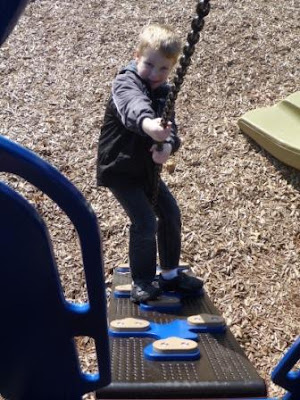 We had fun playing on the ladder that came up through the middle of the play structure. 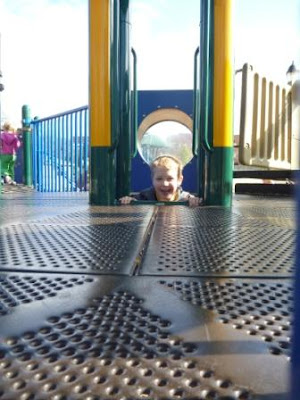 Rachel had fun on the slides. 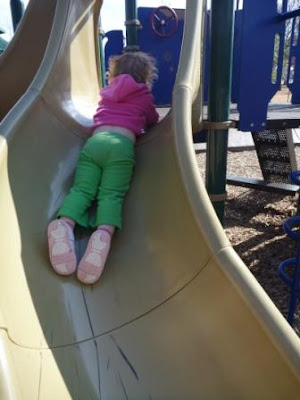 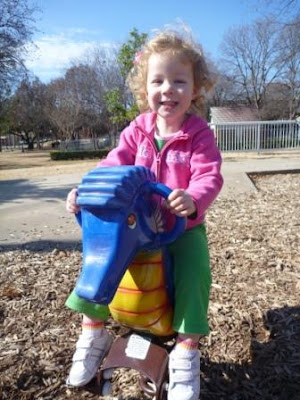 And since he can't miss out on any fun that little sister might be having, Nicholas hopped on for a ride too. 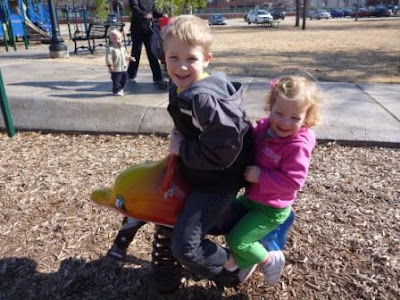 Yes, he really is 6 years old. "Looking a little big for that one, aren't you buddy?" 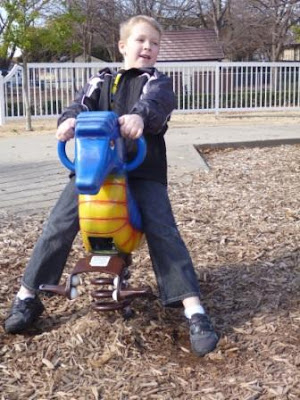 There is a steep embankment between the toddler playground and the big kid playground. It works pretty well at keeping the toddlers in their place. Of course, it can't do a thing to keep the 6 year old in one place! He especially enjoyed making running jumps off of it. 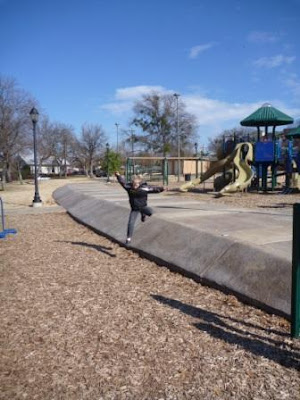 Now take a look at this little devil! Rachel made friends with this little boy who is much younger than her. He was walking but still wobbly. 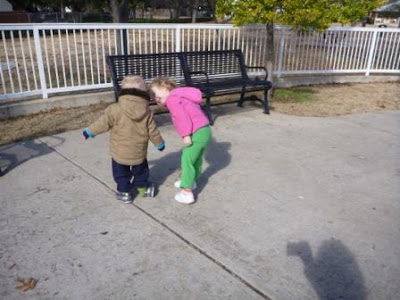 She coaxed him over to the embankment... 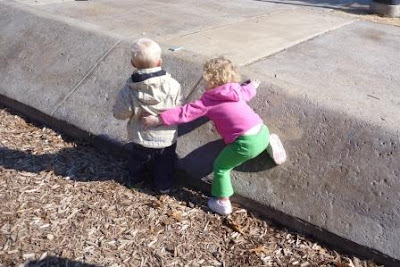 ...so she could help him escape the confines of the toddler playground and go play with the big kids! 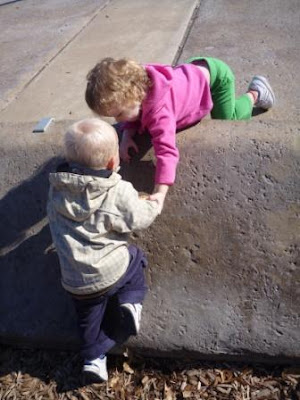