It was about a year ago when I first heard about the total eclipse crossing the United States on August 21, 2017 and I didn't think much of it.  I recall back when I was a child, we watched a partial eclipse in Baton Rouge through a special lens.  We saw eclipse-shaped shadows on the ground.  It was pretty neat.  Since we do not live in the eclipse's path of totality, we would not experience complete darkness but surely it would still be cool.  We would still get some eclipse glasses and at least watch a partial eclipsere from where we are.

But then in the last week of July, I saw this article called "Close" is not close enough from the eclipse2017.org website and I watched this video below from Smarter Every Day.


That was all it took and I was fired up to travel the path of totality to get the full experience of a total eclipse.  But it seemed silly to travel 8 hours and spend money on gas, food, and hotel for a 2 minute 40 second experience of totality.  I jokingly mentioned it to Stuart and showed him the article and video.  I can't tell you how shocked I was when Mr. Practical said, "We have to go!"

The closest city in the path of totality is St. Joseph, Missouri.  Of course with less then a month before the big event, all of the hotels in St. Joseph were booked solid.  We were able to find a hotel in Kansas City, MO which is about an hour away from St. Joseph.  We planned to drive 8 hours on Sunday, August 20th to Kansas City.  On Monday morning, the day of the eclipse, we would drive to somewhere in St. Joseph to get the full experience of totality.  After the eclipse we could explore the area and go back to our hotel in Kansas City for Monday night.  We would leave Tuesday to make the 8 hour drive back home.

After hearing concerns about the amount of traffic in the area and worrying about where we might find a place to park and watch the eclipse, we decided to go up a day earlier so we could be rested and have time to explore the area before the day of the actual eclipse.  This was a very good decision!

We tried to extend our hotel room in Kansas City a day earlier so we could come in on Saturday night but our hotel didn't have a room available for that night.  That seemed odd since it was 2 days before the eclipse and I didn't expect that night to have as many rooms booked.  Just for fun we checked for hotels in St. Joseph for Saturday night.  Amazingly we found a hotel room for Saturday night in St. Joseph.  We figured we would drive straight to St. Joseph on Saturday, spend some time looking around and figuring out several options for where we could watch the eclipse, plan driving routes to there from Kansas City, etc then we would head to our hotel in Kansas City Sunday evening and drive back to St. Joseph on Monday to watch the eclipse.

We didn't have much to prepare and gather for the trip.  Unfortunately, my nice Nikon DSLR camera is broken so all we had for cameras were are cell phones and a crummy little Nikon point and shoot camera that doesn't focus well.  We planned to set up the little Nikon on a tripod to capture shadow bands during the eclipse and we would use our cell phones to take pictures.  There are some conflicting theories about what causes shadow bands. Once an eclipse starts, you can see them as lines of shadows rippling across, almost like heat waves.  They are most noticeable on a white background.  Here is a video of shadow bands during a 2016 eclipse.

We went to Lowe's and bought a sheet of white corrugated plastic so we could see the shadow bands.  Nicholas held the board for less than a minute before he was doing his own scientific experiment with static electricity. 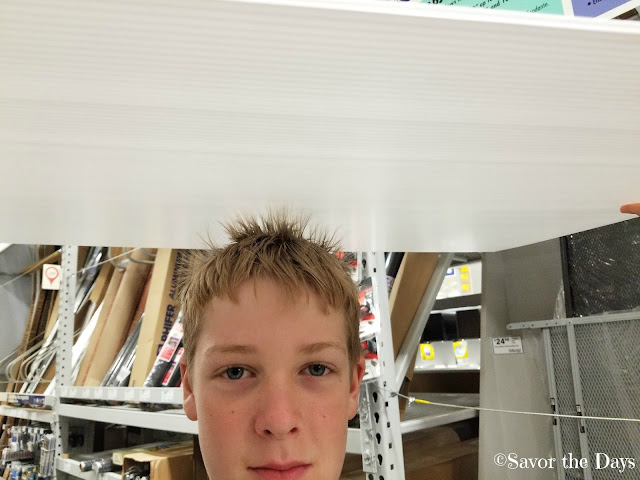 And we couldn't get out of the store without the kids coming up with the idea for a Human Newton's Cradle.  They are so much fun!

We excitedly got on the road Saturday morning.  It was a neat trip.  We had never seen so many wind turbines before.  They were all across the landscape in Kansas and Missouri.  They are called "wind farms" and they generate power from the wind spinning the gigantic blades. 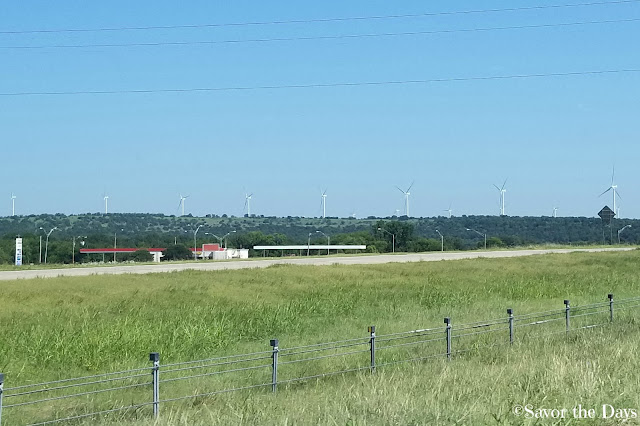 The blades are approximately 116 long and they are attached to a 212 foot tower for a total height of 328 feet!  Look below at how big they are behind that big RV on the road. 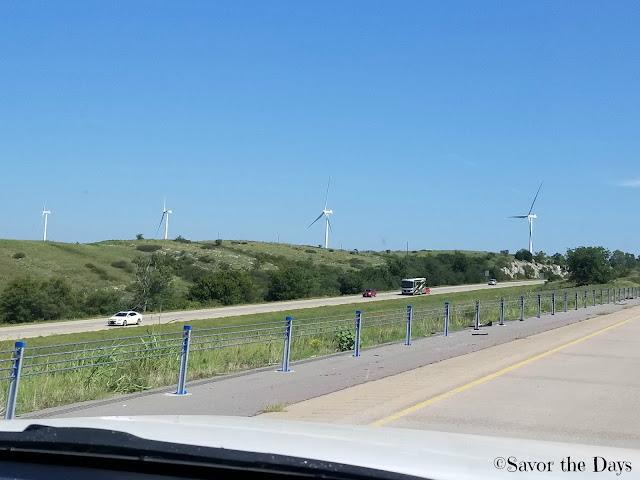 We got a little sprinkling of rain along our trip.  We just prayed that all of the rain would fall down before Monday at 1:00 when the eclipse would be nearing totality. 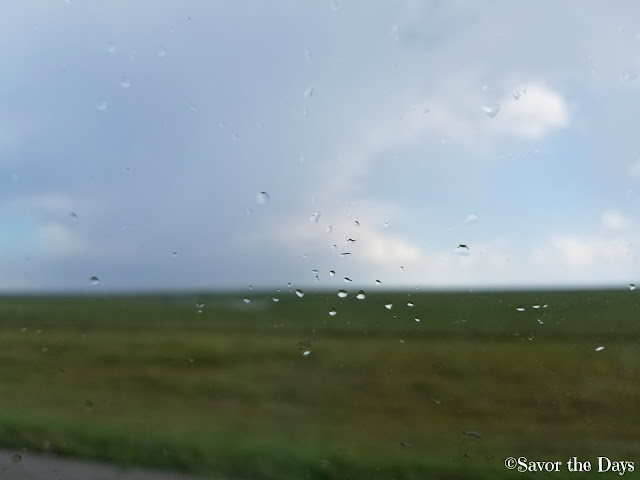 At one of our gas stops, I asked Stuart to let me drive.  He said no.  I'm sure he was ready for a break so I bugged him again.  He said, "I like the way I drive."  Hmmm, I think that is a nice way of saying, "I don't like the way you drive". 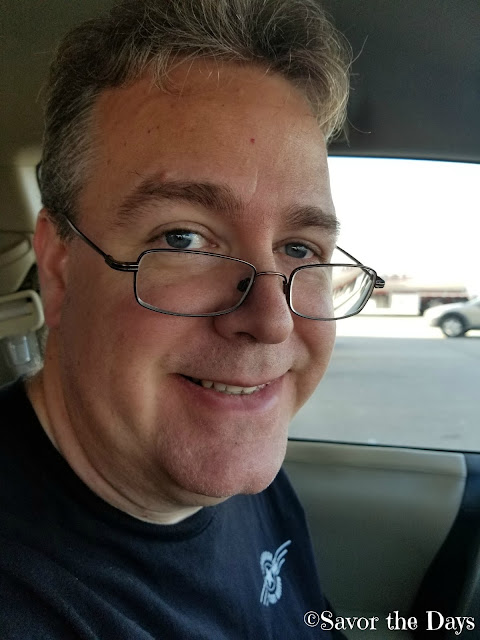 We saw road signs like this one in Kansas that announced the eclipse and prepared drivers to expect traffic on the 21st.  We were still several hours from St. Joseph so it was surprising to see signs like this so far out.  It got me a little nervous about what the traffic might be like on Monday morning as everyone is trying to drive into St. Joseph. 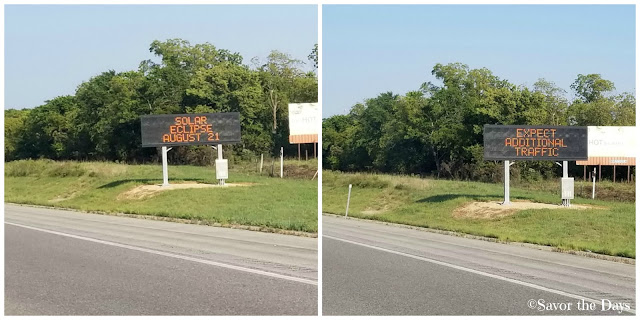 We had read articles like this one from the Washington Post which stated, "For months, state highway officials from 14 states have been meeting regularly via conference call to plan for — or more importantly try to head off — what could be the largest traffic jam in U.S. history, when an estimated 200 million people will be within a day’s drive of the path of the total solar eclipse Monday."  It has been a long time since we have had a total eclipse in the United States and this particular one is unique because it will cross the entire country from coast to coast. This makes it more easily accessible for more people to drive to experience it in totality.  Officials just don't know what kind of traffic to expect but I'm impressed that they have been planning for the worst.

We finally made it into Missouri!  This is a neat trip because none of us have ever been to Kansas or Missouri.  When we get home, I'm going to print off a US map for each kid and they can color in all of the states they have been to. 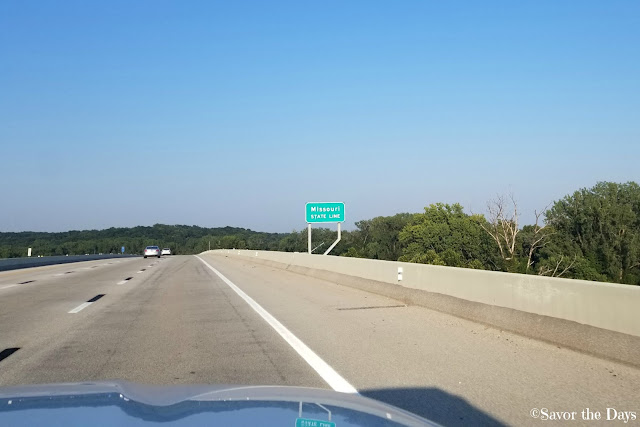 We were so glad to finally arrive at our hotel.  I'm sure Stuart was especially glad since the stinker insisted on driving the whole way by himself!  We like the Drury Inn so we always seek them out when we are traveling.  This location is nice because there is a BBQ restaurant next door that we could just walk to, it is right on the interstate, and just down the street from the East Hills mall which was going to have a big eclipse watching party in their parking lot.  We planned to check it out because that is where we would like to travel to watch the eclipse on Monday because they had lots of parking, bathrooms and a food court inside the mall, and even live bands playing. 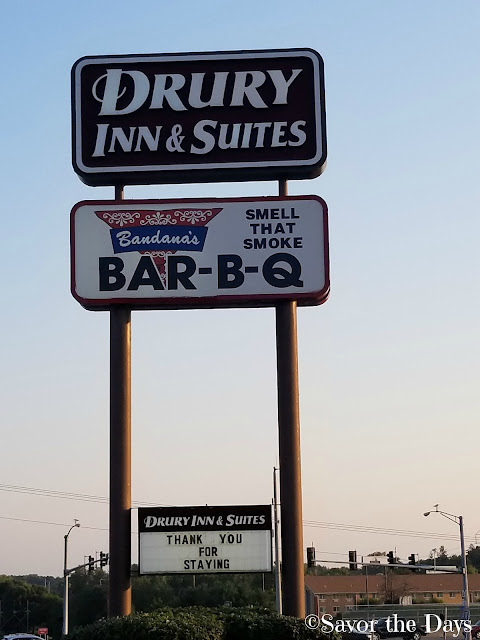 When we checked in at the front desk, Stuart mentioned that we would love to stay here through Tuesday but they were all full when we booked our room.  The receptionist checked and confirmed that they were booked but another receptionist overheard and suggested she check something else.  I couldn't quite hear what she said but sure enough they found a room for us...at the St. Joseph hotel...through Tuesday!  What an amazing blessing!  THIS is where we had hoped to stay from the beginning.  We no longer had to worry about getting up early on Monday to deal with potential gridlock traffic to St. Joseph or worry about getting to the mall before it filled up or trying to find a spot on the side of the road to watch it, finding a bathroom, finding food, etc.  We could just walk out into the parking lot of our hotel and watch the eclipse from right there!  We were very happy! 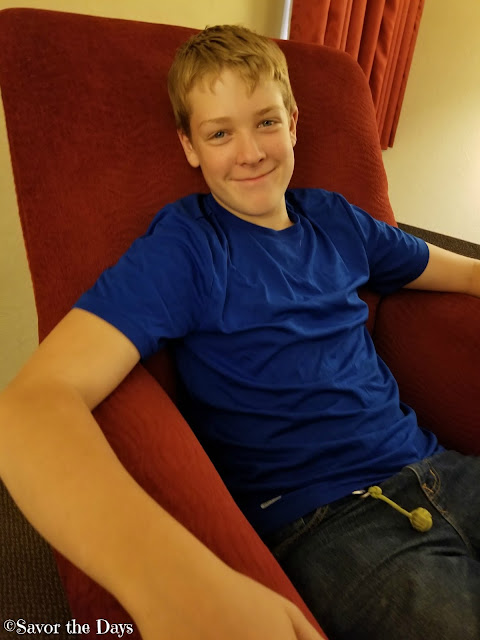 We asked around for a recommendation for a restaurant that served good local food and we ended up at the Fredrick Inn.  I love the curved windows in the building. 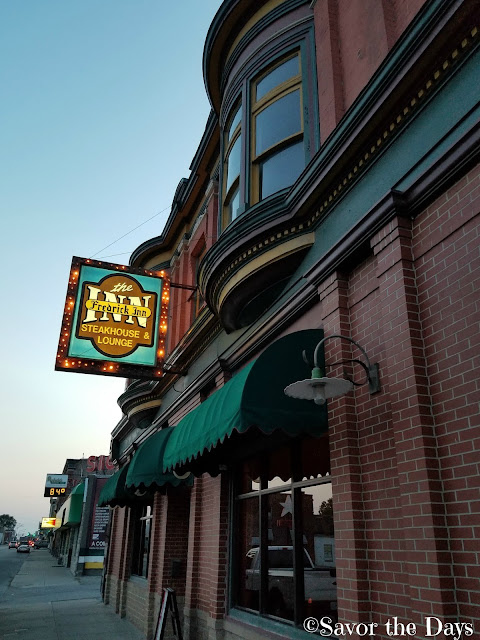 Since the kids have been studying US geography over the summer, I thought it would be neat for them to find some food that was local to Missouri to try.  I had looked at some restaurant menus online and had noticed that at least one of them had livers and onions on the menu.  I was surprised to see that again on the menu at The Fredrick Inn. 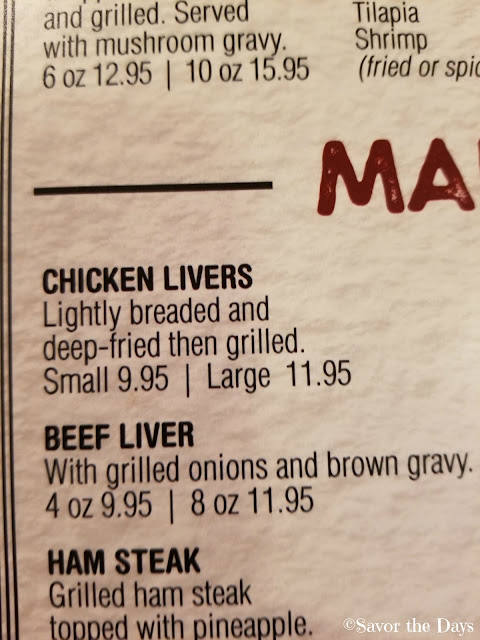 I guess that is a good indication that it is a local dish.  However, I was just tired and hungry and didn't feel like an adventure and the kids weren't interested in trying liver so we all settled for steak instead.  So much for my geography lesson.

At the end of the meal, a waitress will often bring some mints with the ticket.  We were excited to see that we got Andes mints!  I loved these when I was little but haven't had them in forever.  My kids didn't even know what they were.  One of them asked why the waitress gave us pats of butter! 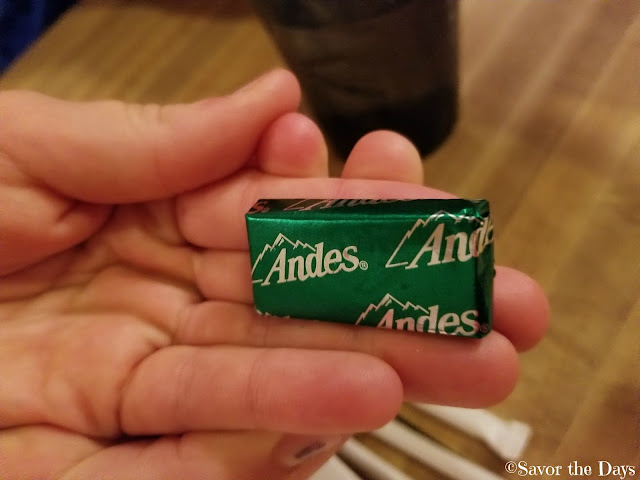 They both loved them mints so I guess we will have to buy them again when we get home.  We headed back to the room to make plans for what we might want to explore the next day.