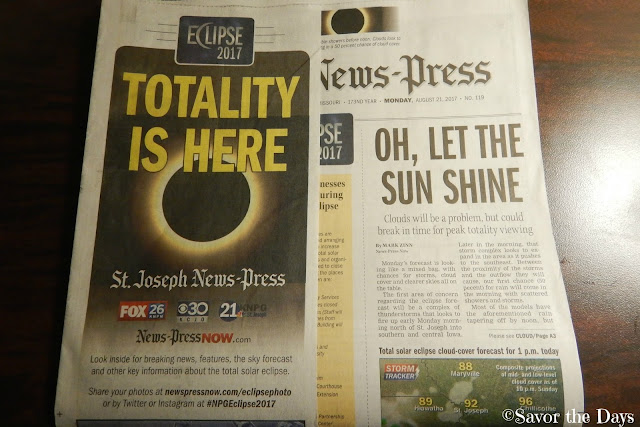 This was the day we had traveled for!  The eclipse was finally here.  We prayed for a wonderful viewing later but the forecast was still holding at about a 30% chance of rain. To help cheer everyone up, we had some fun eclipse snacks...CapriSun, Sun Chips, Day/Night Oreos, Sunkist, Eclipse gum, and Sun Maid Raisins.  At least we would snack well in the storm! 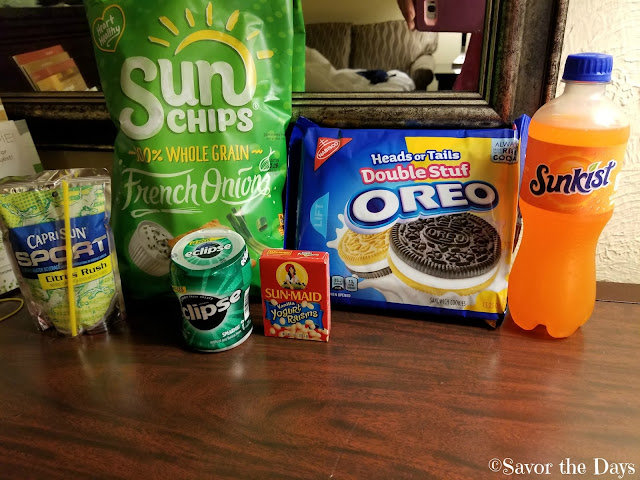 I read the local paper and got all excited again.  We drove 8 hours to be a part of this amazing astronomical experience and a few clouds wasn't going to ruin it. Crazy Homeschoolers?  Yes! 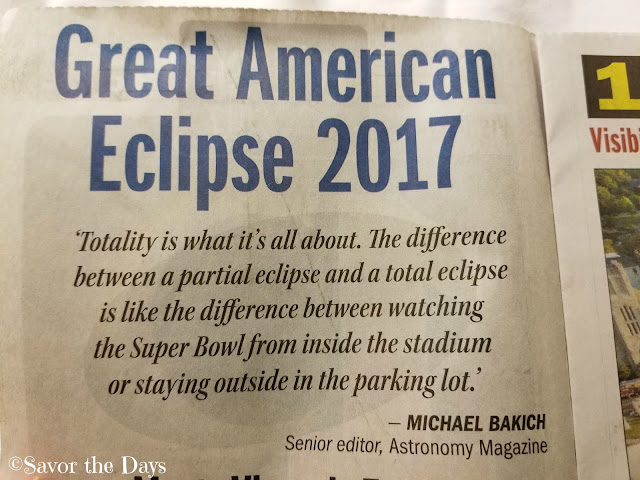 Unless the eclipse is in totality with the moon completely blocking then sun, then you should never look at the sun, even during an eclipse, without some special eclipse viewing glasses.  They block out a lot of the light which helps to protect your retinas from getting damaged.  You also should not take pictures with your camera directly pointing at the sun without some kind of similar protection or it can be ruined.  If the Nikon wasn't broken we would have gotten a nice eclipse filter for it.  However, I was stuck with 2 crummy cameras (hint, hint, birthday coming up, ahem!).  We were going to use the point and shoot to take video of shadow bands and we weren't planning to touch it.  It didn't need a filter.  But I was going to use my phone camera to take some pictures of the eclipse occurring. I created this makeshift contraption with an extra pair of eclipse glasses. 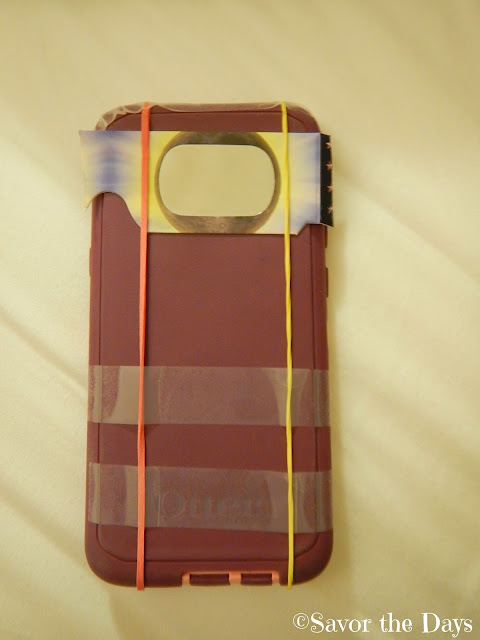 I didn't want to tape the eclipse lens onto the phone because I wanted to be able to remove it during totality so I could get pictures of the corona peeking out around the moon and then put it back on to take more picture once totality was over.  I secured the lens with two rubber bands.  This way I could just slide the eclipse lens down away from the camera lens during totality then slide it back up again.  I tested it a few times and sometimes a rubber band would pop off so I secured them with some tape.  It worked perfectly!

We had a phone app that tracked the eclipse and told us when it was starting, when we could take off our eclipse viewing glasses, etc.  It said that the first contact was happening so we excitedly put on our eclipse glasses and I used my phone contraption to take some pictures of the beginning of the moon covering the sun. 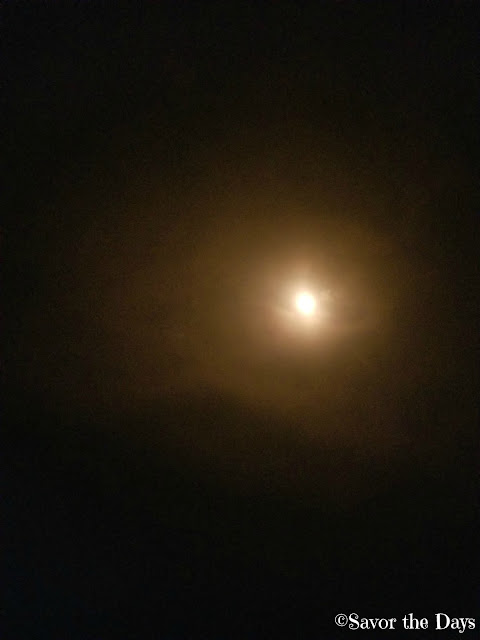 I was pretty disappointed in the quality of the picture and I was feeling down.  Granted the eclipse had JUST started and there probably wasn't much coverage yet anyway but all I saw through the camera was blurriness and I was wishing we had bought a new camera before coming.

But then to make matters worse, this is what I started capturing....lots of clouds! 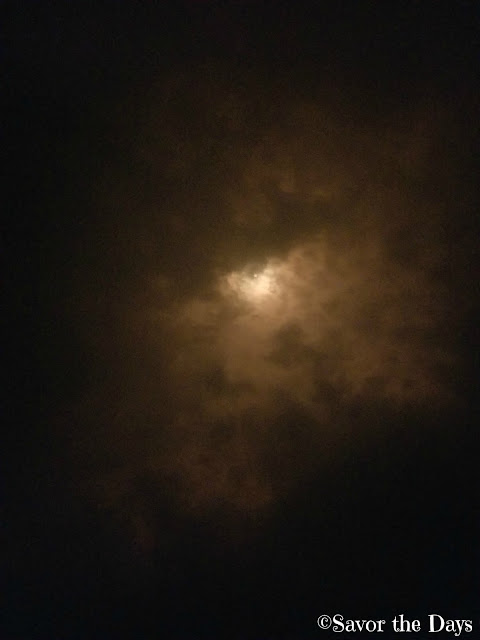 There was heavy cloud cover but still a patch or two of blue sky.  There was still some time before totality so we tried to stay hopeful. 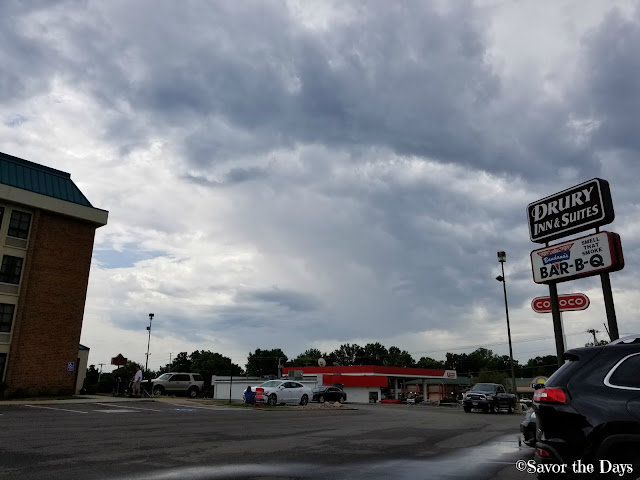 Then it started to rain.  I looked at Nicholas and couldn't help but laugh.  We were here to watch this amazing eclipse and there was my son standing under an umbrella looking at nothing but a grey sky!  Yes, we are crazy!  But interestingly, he had decided that he would take a time lapse video of the event using his ipad.  He didn't have a tripod so he secured it to the chain link fence and let it record. 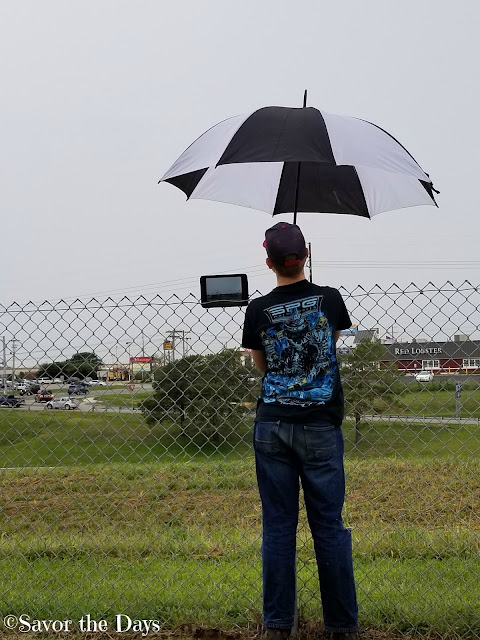 We gave up on recording the shadow bands and put that equipment back in the car.

At totality, the sky was still covered in clouds so we didn't get to see the corona.  But at 1:06 in the afternoon, we did get this stunning view as the sky got dark, the temperatures dropped, the horizon glowed, and the crickets started chirping.


There really was a 360 degree sunset on the horizon! 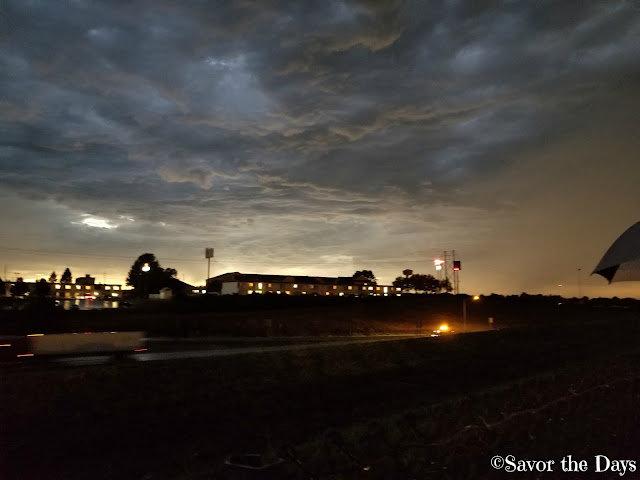 Look how dark it got in the middle of the afternoon!  Street lights automatically came on and we had a family of frogs that started croaking in the grass next to us. 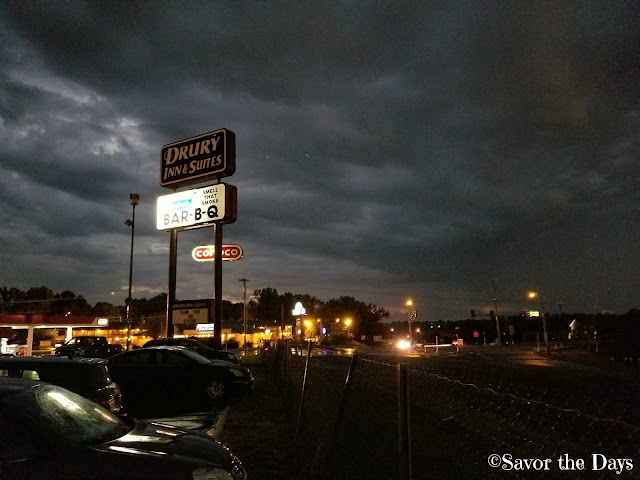 Here is another video clip I took as it was darker now.  It was incredible to be able to experience this for 2 minutes and 40 seconds!


And here is the time lapse video that Nicholas took.  It is just impressive how dark it suddenly got and then everything went back to normal.


I was able to get one good still picture of the actual eclipse as the moon was on its way out of the shot.  One picture but it was so worth it! 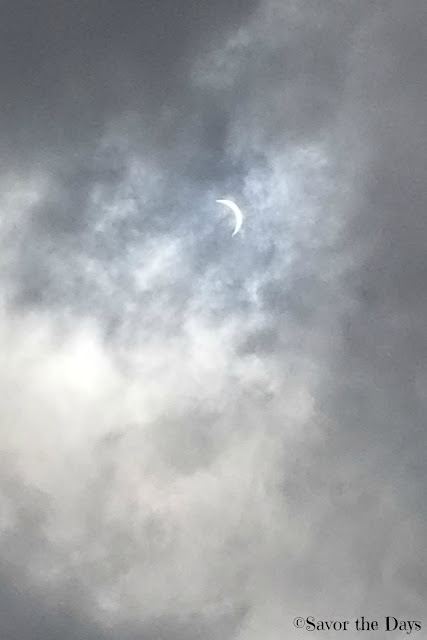 It was cloudy and we didn't get to see the moon in front of the sun during totality.  Was it worth it?  You bet!  I would do it again in a second.  The next total eclipse will occur in 2019 over Chile.  Hmmm, if we start planning and saving up now.....

at August 21, 2017
Email ThisBlogThis!Share to TwitterShare to FacebookShare to Pinterest