Rachel has learned the sounds of all the letters and can identify many of them but still needs help with quite a few of them. So I'm going to do a little bit of work with her on letters. She'll do some coloring, searching for the letter, making letter sounds, do-a-dot pages, crafts, storytime etc. Everything will be related to that letter.

Rachel usually likes coloring but she doesn't fill in an entire open space with one single color. Instead she likes to use splotches of multiple different colors to fill the space (which kind of drives me crazy!). 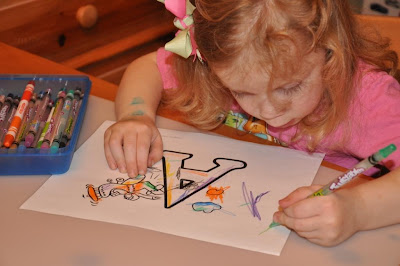 I got the boxed set of Alpha Tales by Scholastic. The set comes with a teacher's guide plus a book for each letter of the alphabet.

Here's we reviewed the mini-book for the letter A. I had her point out to me the upper case A's and the lower case a's which I marked for her. 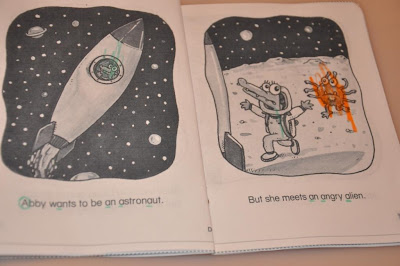 Then she colored some on the pages but then she wanted to move on to something else.

So I pulled out the Discovery Box I made for her which includes all sorts of little things that start with the letter A such as alligator puppet, Angelina Ballerina, apples, astronaut, angel, army man, avocado, ambulance, airplane, and aluminum foil. She placed all the things out on the table so she could look at them all. 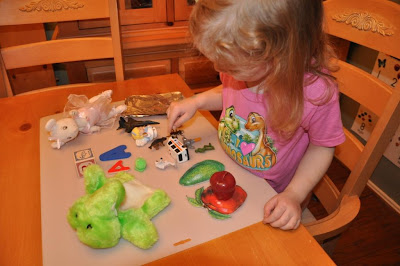 I had bought Angelina for her a while back but I forgot to give it to her at Christmas so she was a new surprise in the box. Rachel had fun wrapping up several of the A objects in the aluminum foil! 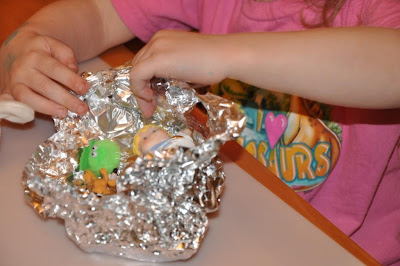 I also had two series of preschool printouts with a theme of apples and alligators. Here she is tracing numbers on one of the alligator pages. I had to "encourage" her to try writing with her right hand. She still switches hands a lot and I'm trying to see if we can start pushing her to write with only one hand. We don't have any left-handers in our families but Nicholas is ambidextrous. We're still not sure which hand is dominant for Rachel. 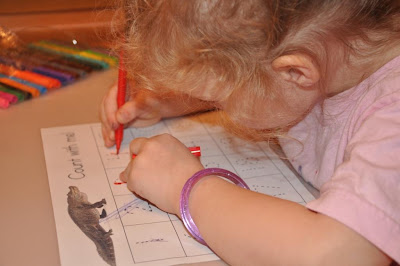 I worry when I see Rachel's head so close to her paper. I recall a teacher in high school commenting to me about my head being too close to my paper and I think I did it because of vision problems. Hopefully she isn't already having problems but I did get my first pair of glasses in first grade! 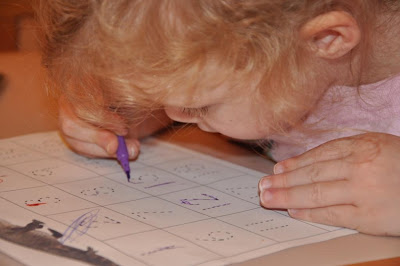 Rachel seemed to have fun working with the letter A. I don't have a particular plan as to when we will finish all of the letters. Rachel's a quick learner and she loves to sit with me to do "school" but she is in a Montessori preschool class two days a week so I don't want to make her do much more school work than that at this age.
at January 17, 2012
Email ThisBlogThis!Share to TwitterShare to FacebookShare to Pinterest
Labels: homeschool, Rachel