“Philosophy [nature] is written in that great book which ever is before our eyes -- I mean the universe -- but we cannot understand it if we do not first learn the language and grasp the symbols in which it is written. The book is written in mathematical language, and the symbols are triangles, circles and other geometrical figures, without whose help it is impossible to comprehend a single word of it; without which one wanders in vain through a dark labyrinth.”
- Galileo Galilei

The kids had a great opportunity to attend a free student event at the American Astronomical Society's Convention at the Gaylord Texan Convention Center in Grapevine, TX.  They got to experience hands-on science with some world class astronomers! 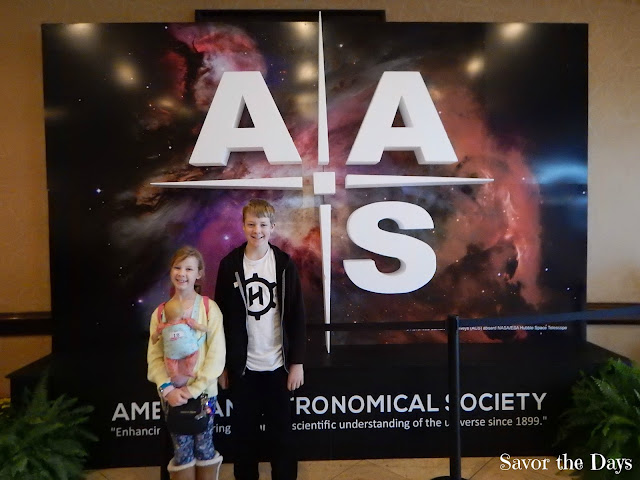 The event is geared towards middle school and high school students but younger siblings can attend too as long as they are accompanied by a parent.   I'm really glad that Rachel could come with us because she interacted with the exhibitors and learned right along with the older kids.

The event started with a presentation from Nick Siegler from NASA Jet Propulsion Laboratory on Exoplanets and the Search for Life.  It was a great talk about planets outside our solar system that show potential for life.  I found a video of his complete talk on the internet.  It's called The Search for Planets, Habitability, and Life in our Galaxy. 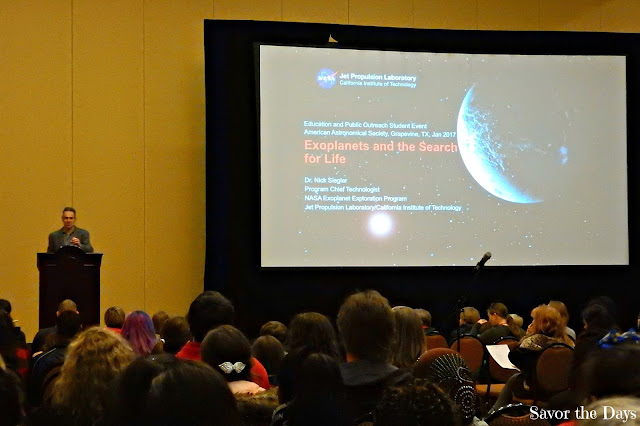 At the end of the presentation, the kids were encouraged to consider pursuing a career in Astronomy.  But as was pointed out, you don't have to be a rocket scientist to work for NASA.  The study of astronomy certainly requires scientists and engineers but they also need people who excel at math, can work with computers to develop simulators and computer models, as well as people with a love for geology to help them study rock formations and terrain on other planets.  There is a wide range of people needed for space exploration and I love that kids were introduced to the idea that they might have an integral part in future space studies even if they can't name all of the constellations in the sky. 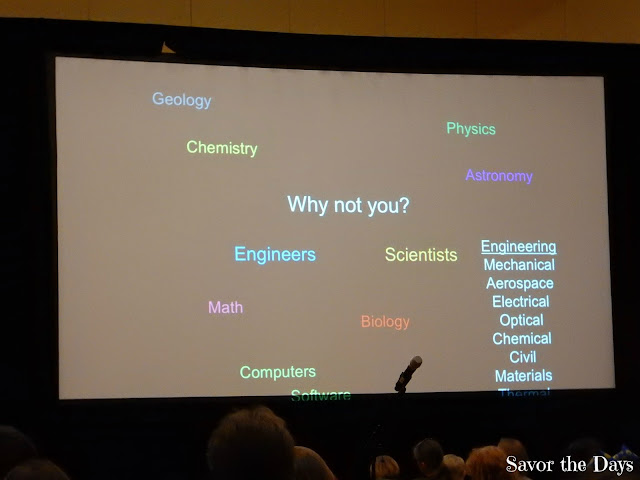 Next we separated into groups.  Our group had about 10 kids.  We went into the convention center where exhibits packed the room.  Exhibitors included observatories, researchers, colleges, and product vendors from all over the world!

I couldn't help but notice the Career Center when we first walked in.  Again, they are reaching out and trying to get people connected with a career in Astronomy.  As a parent of a kid who loves learning about space, I am glad to see such eagerness to recruit people into the field. 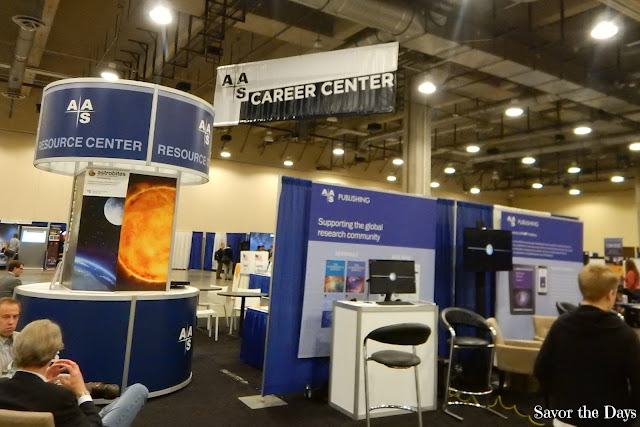 I was a little worried that there would be tons of kids at each station and it would be a struggle for kids to hear the presenters and see what was going on but I was so wrong.  The plan was well thought out.  Each group started at a different exhibitor then after about 15 minutes a bell would ring and we would move to the next assigned exhibitor table.  Our group was the perfect size for everyone to participate and hear what was being said.

We started at the table for the Space Science Institute. from Boulder, CO. They had a presentation for the kids and then challenged them to put a set of picture cards in order of distance from the Earth.  The cards were of things like the moon, the Hubble telescope, International Space Station, etc.  Then they were given another challenge of putting a different deck of picture cards of space things in order based on smallest to largest.  All the kids seemed engaged and interested. 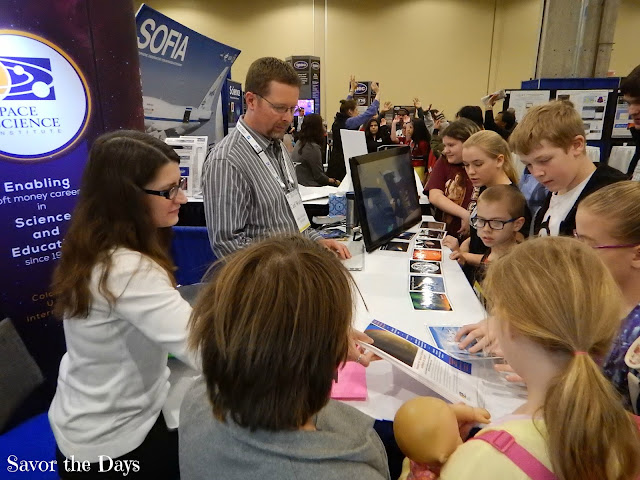 Our group visited the presenter for the Planetarium at UT Arlington where they talked about planets and orbits.  I had really been worried that all of these incredibly smart scientists would only want to talk to other brainiacs and not really want to interact with kids but I was so wrong.  By just the second table, I was realizing that these scientists really just wanted to share their passion for science with everyone, but they especially wanted to reach out to the next generation. 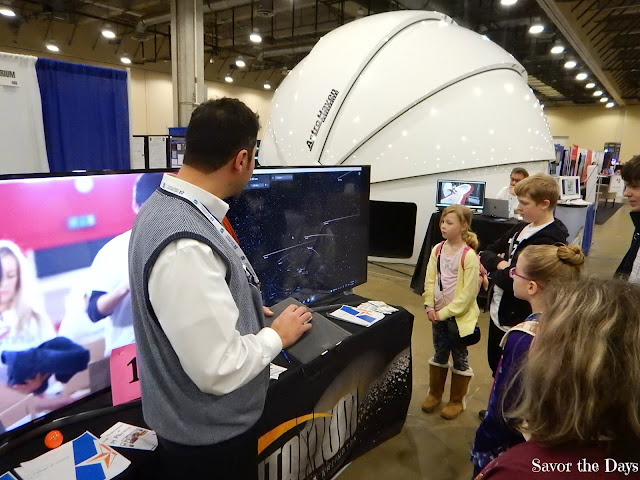 We visited with representatives from the National Radio Astronomy Observatory where we learned about the use of techniques to study radio waves emitted from outer space that are not visible to us otherwise.  With these special glasses, we were able to see how radio waves look compared to what we normally see. 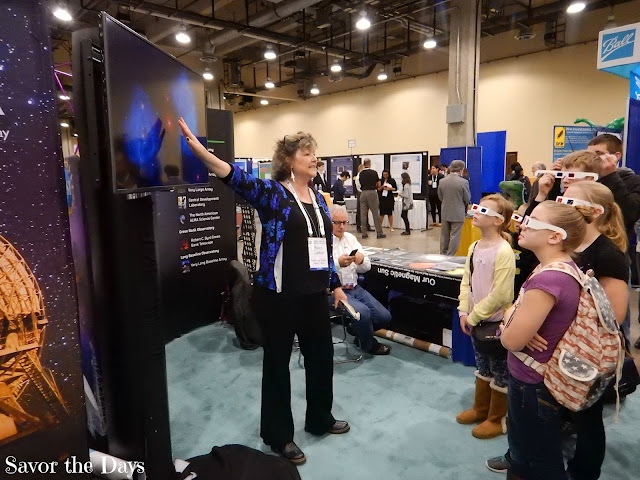 Another example we saw was how infared technology could be used to see which lidded coffee cup actually contained hot coffee.  This technology is used to on a much larger scale to study objects in the sky. 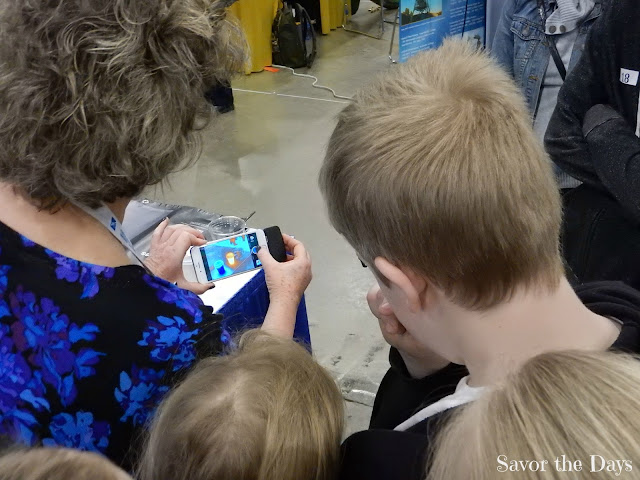 Next we visited the Ball Aerospace and Technologies exhibit where we met Missions System Engineer, Paul Lightsey.  He explained some of his work on the James Webb Telescope.  We learned that the mirrors are coated in gold because gold works the best at reflecting infared radiation and this will help NASA see even the smallest objects out in space.  I found a YouTube video of a talk that he did on the James Webb. 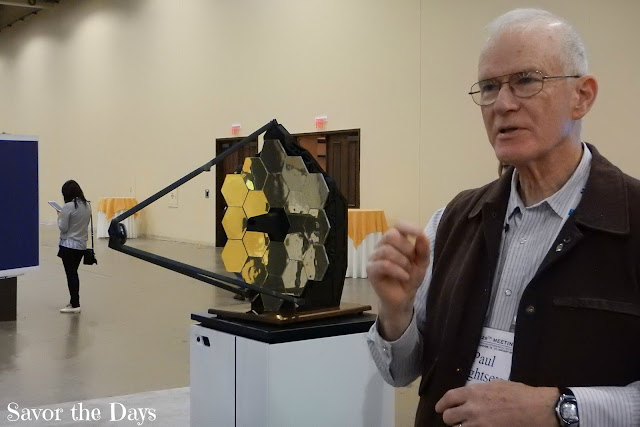 We met with professors and students at the University of Arizona and learned about different types of meteorites.  We even got to hold very tiny pieces of the moon and Mars. 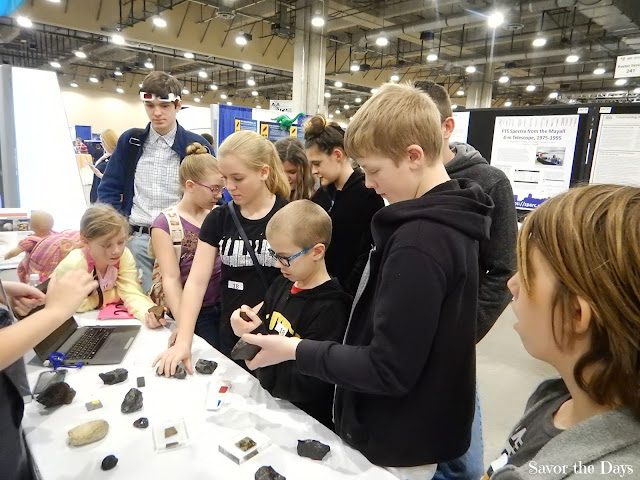 Nicholas loves all things rock so this was one of his favorite exhibits.  He enjoyed asking questions and talking with them.  As I mentioned earlier, all of these scientists were excited to talk to the kids and they took time to answer all of their questions.  I was really impressed. 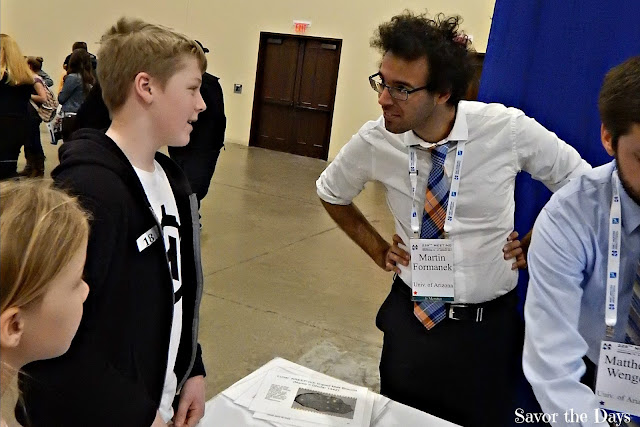 We visited with SPIE which is the International Society of Optics and Photonics.  We learned how different light frequencies produce different types of light.  We can use this knowledge to determine  what substances are out in space by the light they produce. 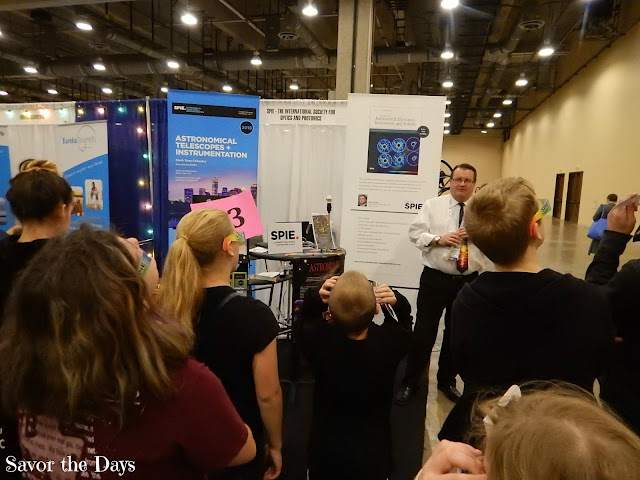 SPIE had a great tool that they passed out to us.  They are called Rainbow glasses and it shows the full color spectrum for visible light.  They are really cool! 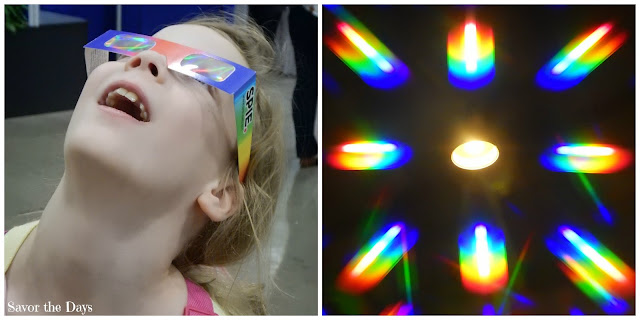 We also visited with Digitalis Education Solutions.  Oh my!  Every homeschooler needs one of these portable planetariums!  Seriously look at this thing! 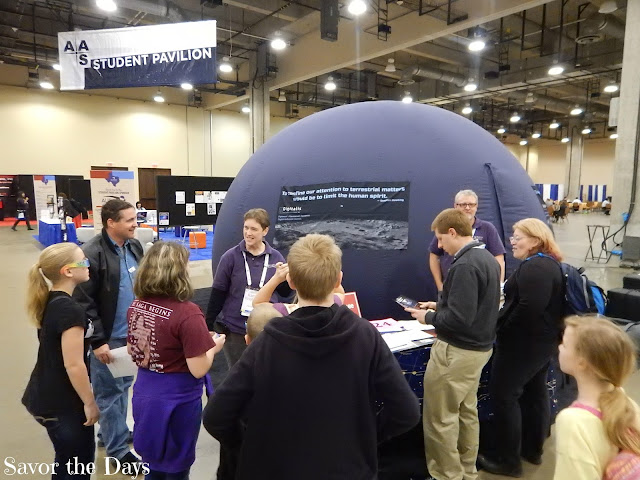 We got to go inside and see a short presentation on Earth's place in the galaxy and constellations.  I could really get into teaching astronomy if I had one of these! 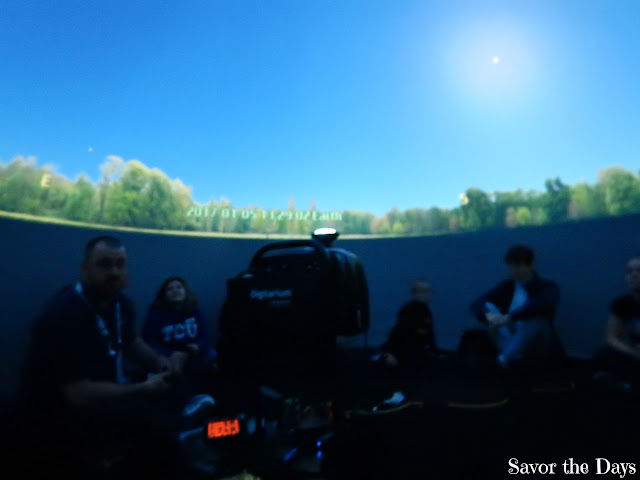 We met with Sloan Digital Sky Survey.  They created incredibly detailed three-dimensional maps of the universe.    We got to learn a little about their process. 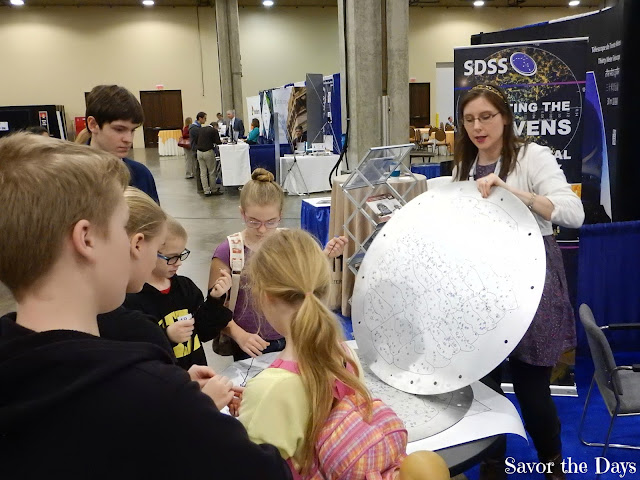 Rachel enjoyed this exhibit because the two presenters were both female so she felt a little less intimidated.  They were very knowledgably but very friendly as well.  And they passed out amazing little candies that had a picture of their telescope printed on them! 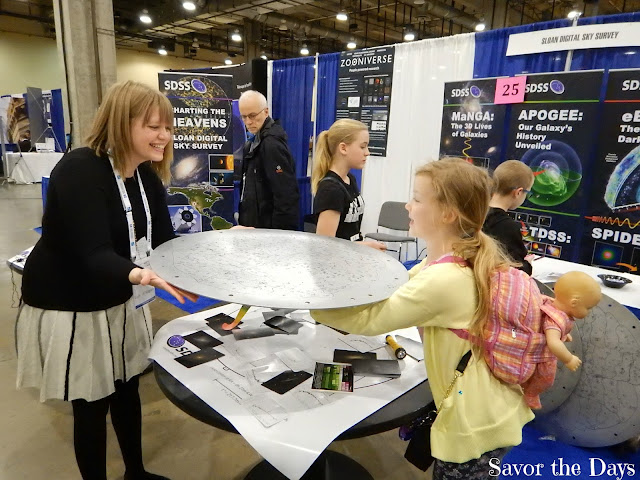 We learned about the Chandra X-Ray Observatory which is NASA's flagship mission for radio astronomy.  It was launched in 1999 and it orbits outside Earth's atmosphere at around 65,000 miles high.  It has been used to study exploded stars, black holes, and dark matter. 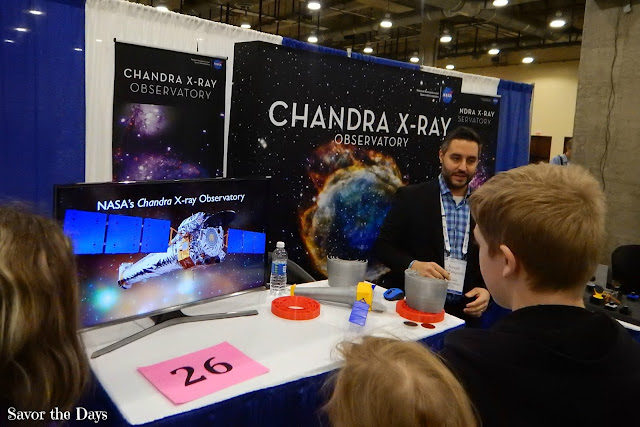 Chandra works through the use of some very sensitive mirrors nestled inside it.  The kids got to get some hands-on use with mirrors as they adjusted them to direct a laser beam to a sensor at the end of the table. 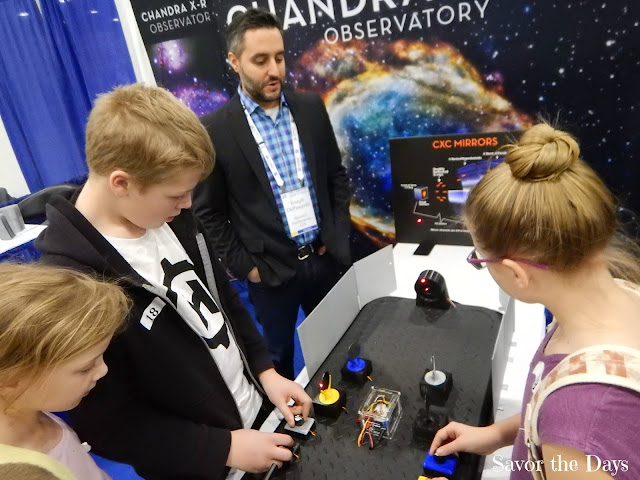 Our group time was almost up but we got to visit with one more exhibit - Astron, the Netherlands Institute for Radio Astronomy.  They use high tech radio telescopes on the ground to pick up radio waves from outer space and turn those into a picture of what is out there. 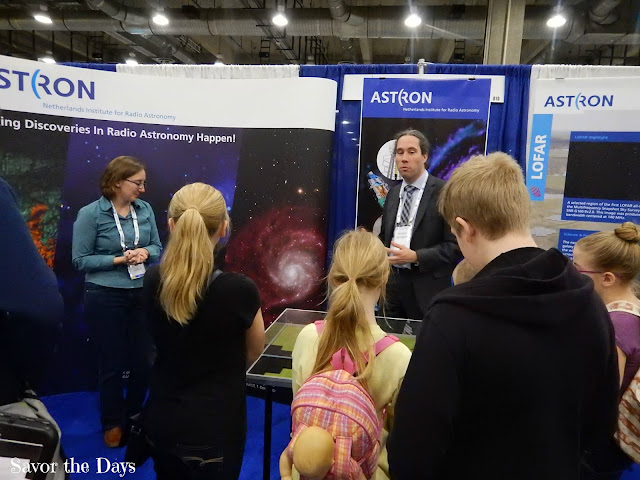 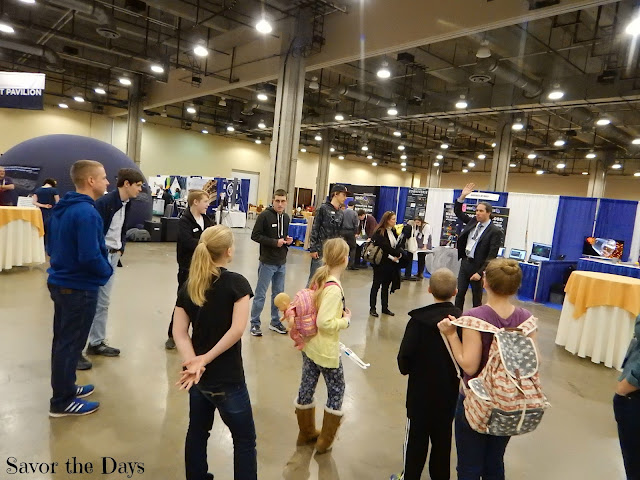 The student session was officially over but there had been some other exhibits that we wanted to see so I got permission for us to wander around for just a little bit on our own.  If you know me, you can imagine that I was drawn to this table of books!  They were some impressive looking books that I was considering buying but then realized they were college-level.  I think I can hold off on those for a little longer. 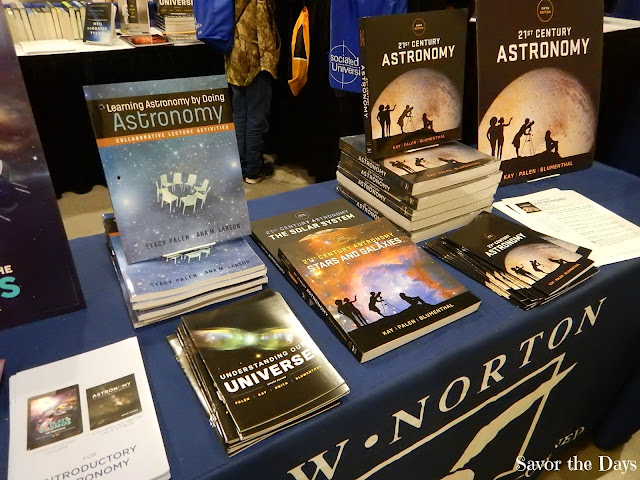 We visited with the University of North Texas' exhibit and got to hold the largest piece of meteorite we've ever seen.  We talked to them some about how to identify meteorites as well as about the UNT planetarium and star parties. 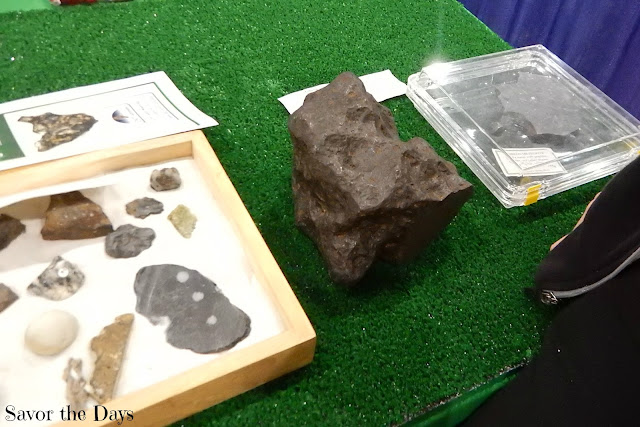 We got to see a model of the LISA Pathfinder which detects gravitational waves in space. 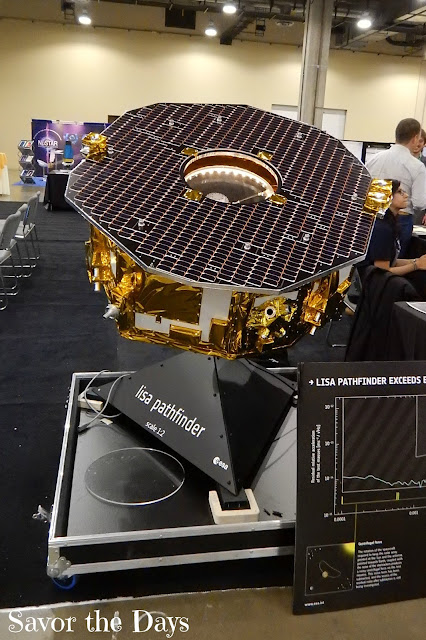 We saw a very scaled down version of a science balloon.  These are used to carry scientific instruments for space and earth science research up to a float altitude where stratospheric winds will drive it along.  Some aspects of it can be radio controlled from the ground such as when to release its payload. 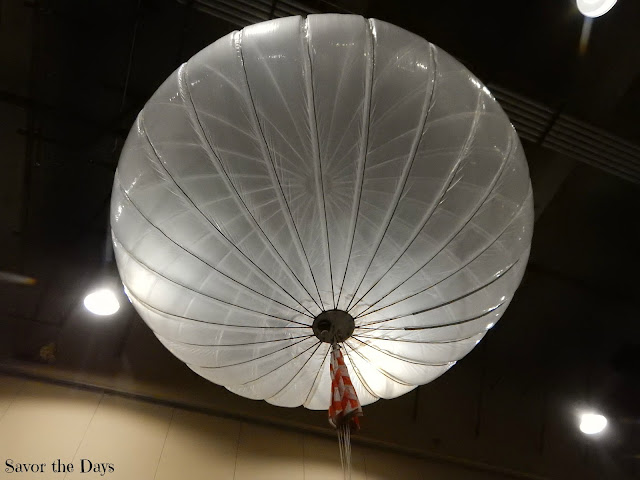 We learned about pulsars which are spinning neutron stars created from a supernova when a star exploded.  It is always spinning and releasing electromagnetic radiation from a certain point.  We can only see this beam of radiation when it is directly facing us so it appears to us that it is blinking but it is actually just rotating around. 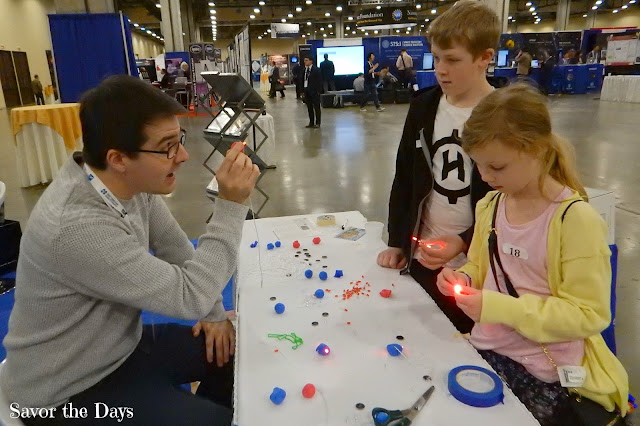 The kids got to make their own pulsar models.  They attached two LED lights to a battery, attached a string and wrapped it all in clay.  They held it up by the string and then twisted the string a little.  When they let go, the "pulsar" spun around quickly and the lights looked like they were blinking.  It was a really great demonstration! 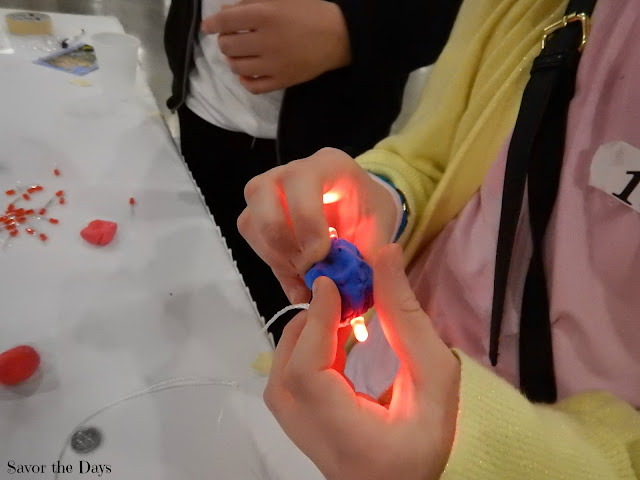 We got to play around in front of an infared camera. 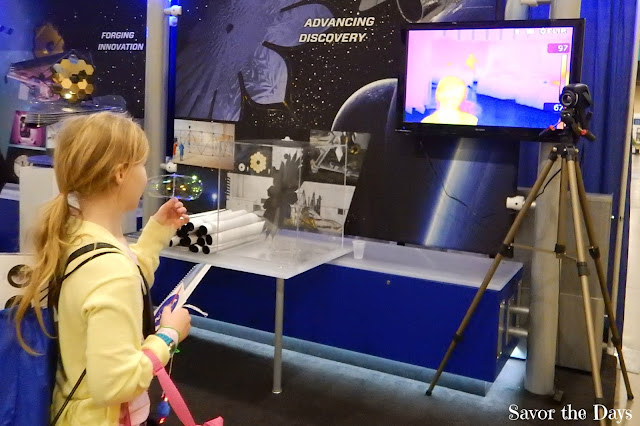 We were sent home with great goody bags full of information, toys, and even our own Galileoscope to keep! 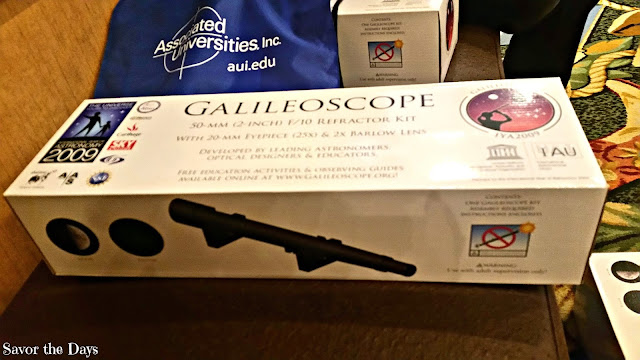 This was a truly amazing experience and I'm so grateful for all of the scientists and researchers who spent time with the kids today to answer their questions and open their eyes to the amazing world of Astronomy.
at January 05, 2017
Email ThisBlogThis!Share to TwitterShare to FacebookShare to Pinterest
Labels: astronomy, field trip, Nicholas, Rachel, science, science experiment