We spent most of the day on a family geology field trip to the Dallas Gem and Mineral Society show in Mesquite.   There were tables all over the exhibit area.  We saw some amazing rocks, minerals, and fossils and we met a lot of interesting people who are passionate about rocks.  We learned a lot.

Below is a picture of Siderite in the Chalcopyrite family.  Calcopyrite comes from the Greek worda calco which means "brass" and pyrite which in Greek means "striking fire".  It is a copper iron sulfide mineral - CuFeS2.  Luster: metallic, System: Tetragonal, Mohs hardness scale: 3.5-4 (can be scratched. 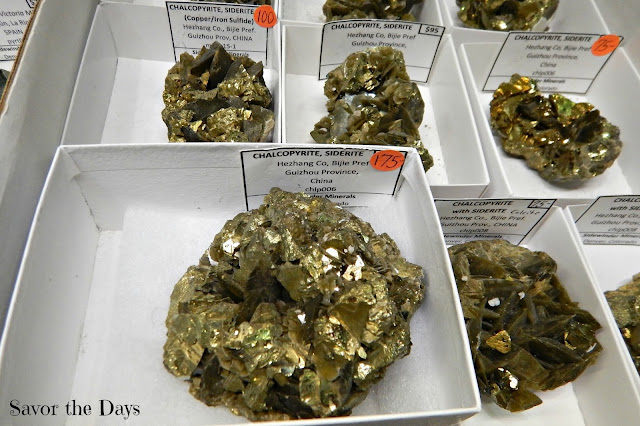 This is a picture of pyrite.  Pyrite (FeS2) is also known as Fool's Gold because it looks very similar to real gold and they often can be found together.  They can be found in clumps or in perfect cubes like these embedded in a matrix.  System: Isometric.  Mohs Hardness scale: 6-6.5. 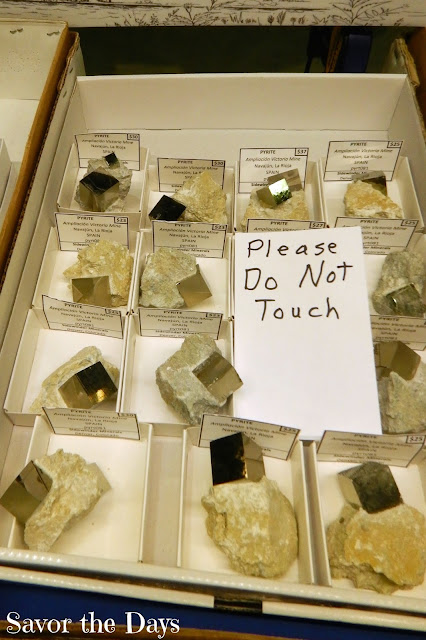 This looks like silver pyrite.  It's Galena Sphalerite.  It is a zinc sulfide mineral - Zn1FeS.  System: Isometric, Mohs Hardness Scale: 3.5-4. 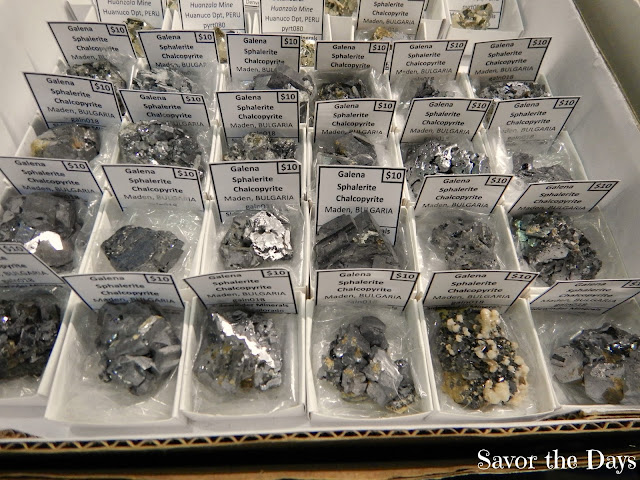 There were tables of home décor items made from large minerals or fossils.  There were also lots of trays of small items too.  Some had jewelry made from minerals. 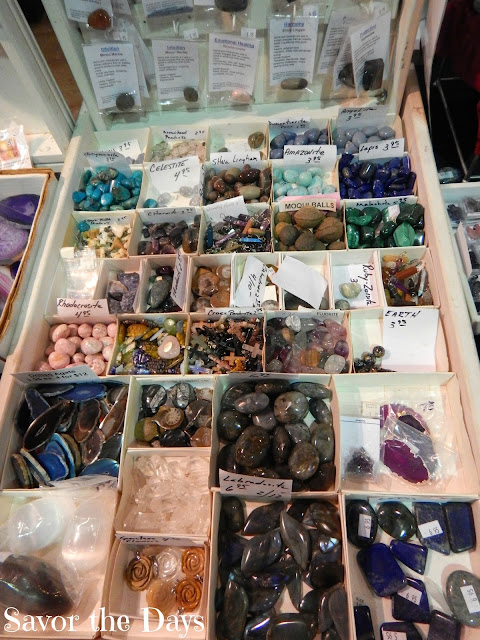 The kids were fascinated with all the different things to look at. 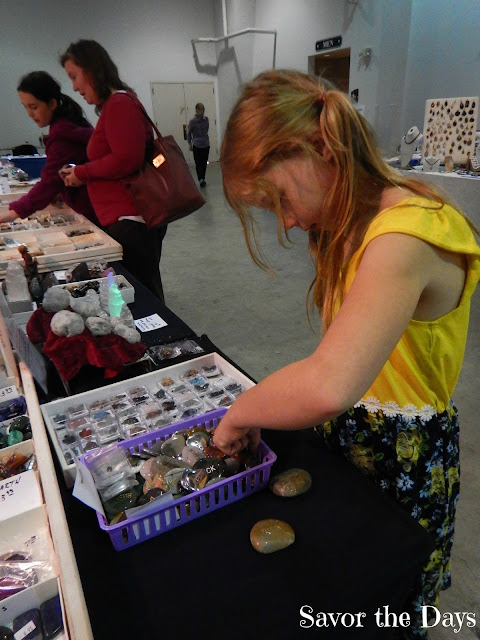 If you know me, you know I love ammonites.  There were lots of ammonites at the show.  Some were rough in their natural state which is what I like but these polished ammonites are really pretty too. 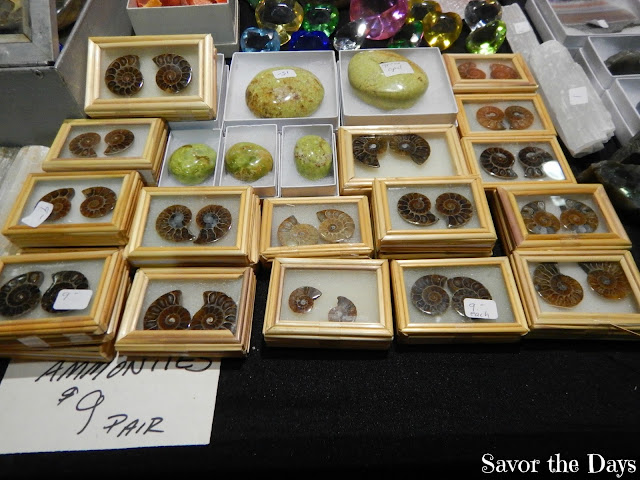 I didn't get the name of this but it is a real beauty.  The picture doesn't capture the glow that the blue areas seemed to have. 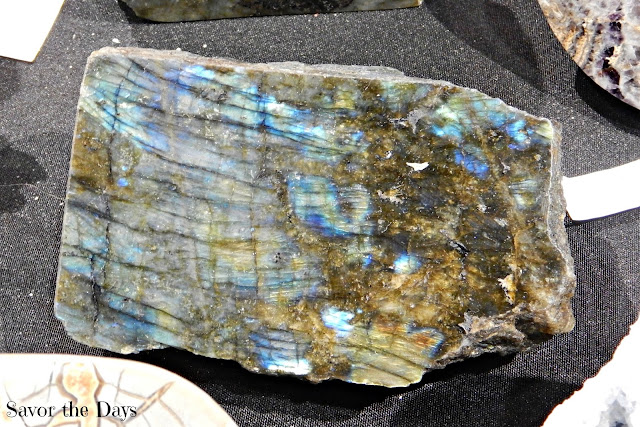 This is a really cool Chalcopyrite "Peacock Ore" from Mexico.  I like the blues and green metallic colors.  It is Chalcopyrite that has been treated with an acid to create that iridescent tarnish. 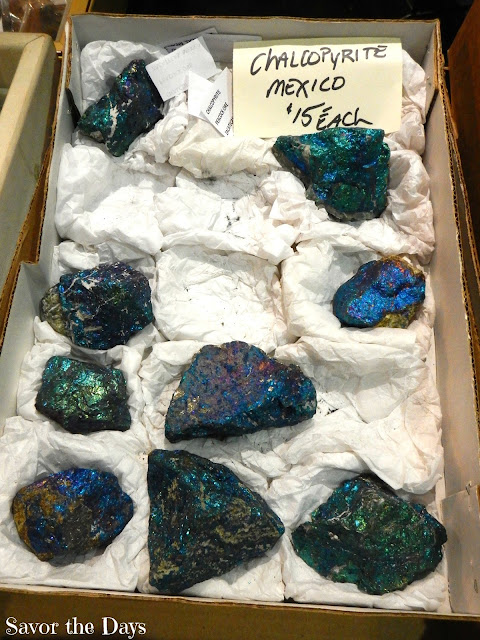 Here is another pretty peacock ore with gold and copper iridescence. 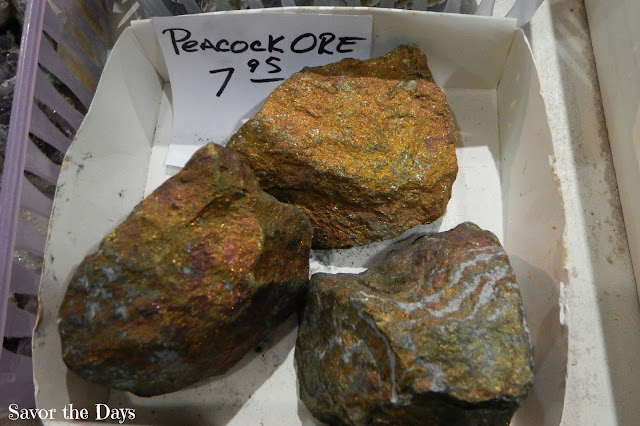 This spiky guy is Scolecite.  It is a calcium in the zeolite group - CaAl2Si3O10-3H2O.  I'm not familiar with these but I'm afraid if it were at my house the kids would not be able to resist touching it and all of those cool spikes would get broken off! 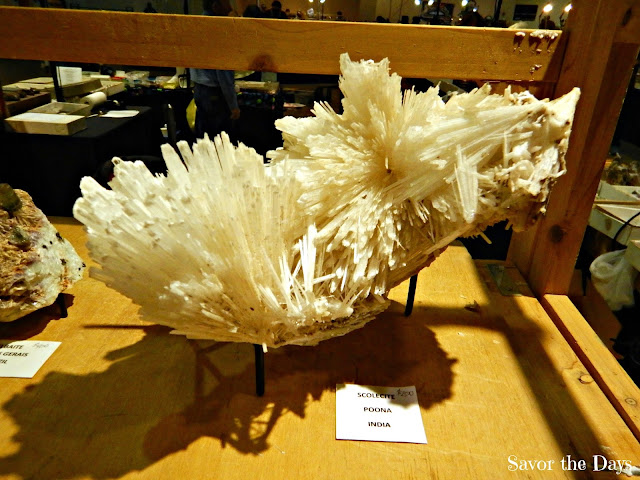 We got to hold some true meteorites!  This one is priced over $600 so we just held it then gently put it back on the shelf. 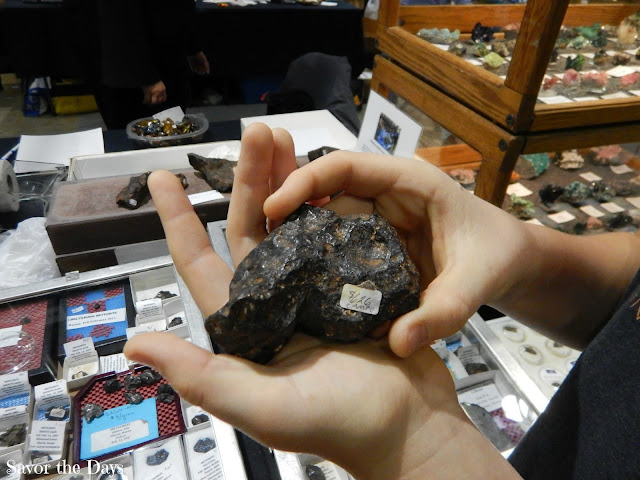 The vendors are all passionate about their gems and minerals and they enjoyed talking to us and teaching us about what they had on display. 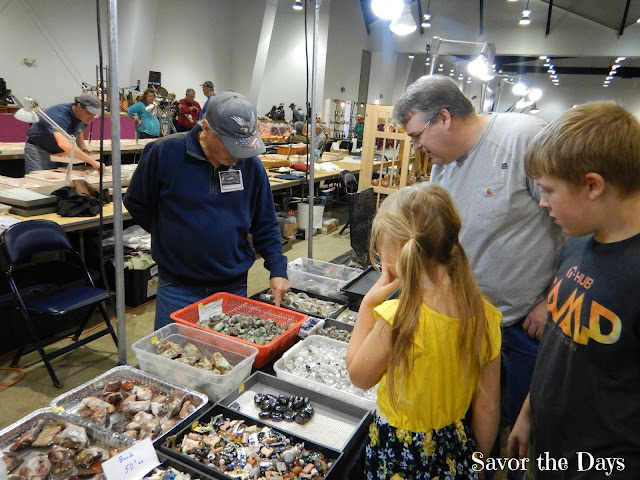 There were lots of geodes.  Some were already cut but some were still whole which is fun because you can break them yourself.  One guy even had a great tool that broke them into 2 perfect halves for you.  We've broken geodes before at our favorite local rock shop, Nature's Gallery. 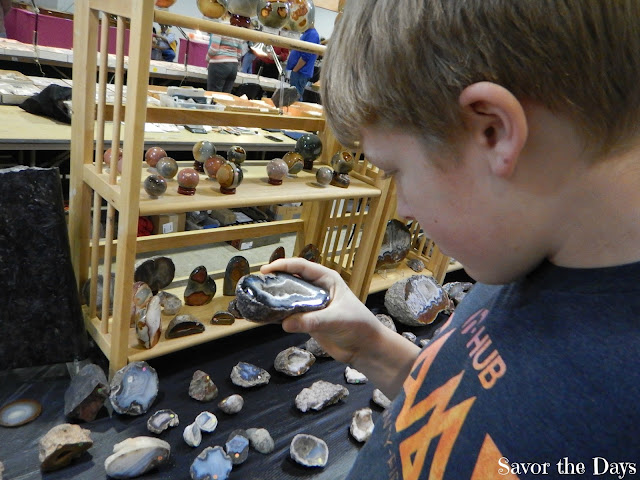 Speaking of Nature's Gallery, we did find their table and enjoyed talking with the owner, Donald Slater.  He's our go-to rock guy.  Nicholas had wanted to go see him last week to get his help in identifying some pieces he has but that traffic on I-35 was too bad and I turned around.  So Nicholas brought the pieces with him to the show. This piece he calls, "The Brain" because, well, it kind of looks like a brain.  Mr. Slater said that it is a "crinoid replacement" which means that over time water dissolved the actual crinoid and replaced its form with a mineral substance in the shape of the crinoid. What Nicholas has now is a great quartz specimen in the shape of a large crinoid. 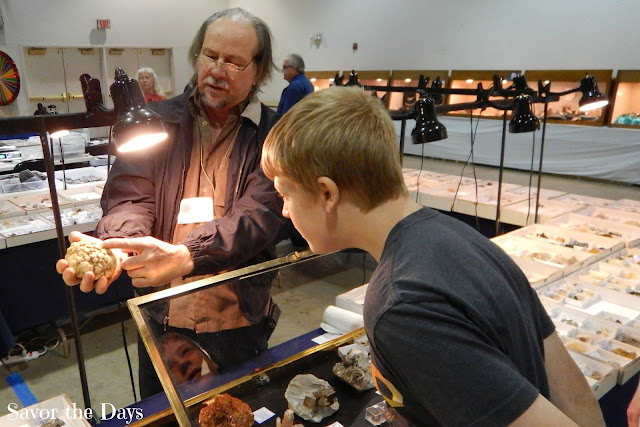 We met with some gold prospectors and learned the basics of panning for gold.  Now that would be a neat hobby to get into! 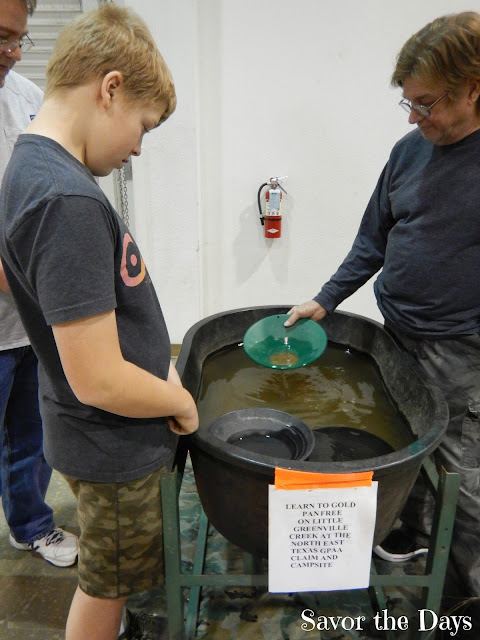 Oh, another picture of ammonites!  I do like them :) 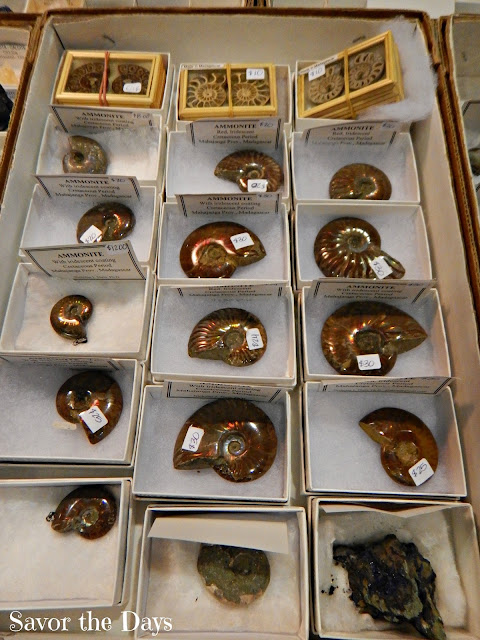 This is my newest fascination!  Look at this natural copper.  I love the shiny copper against the turquoise tarnish.  I should have gotten a better picture that was more close up but they are some really amazing pieces. 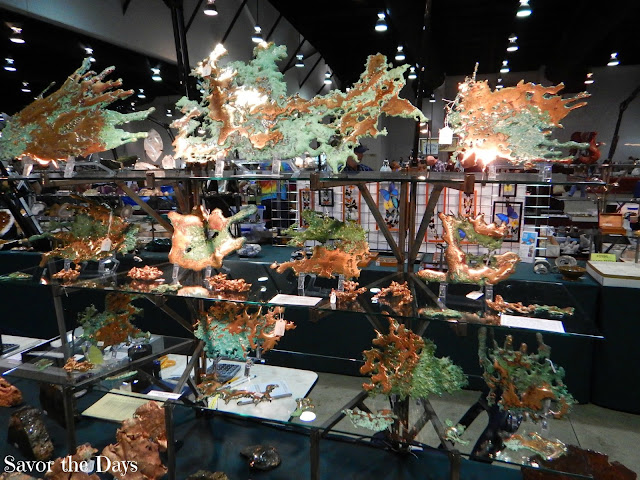 There were lots of fossil teeth and bones. 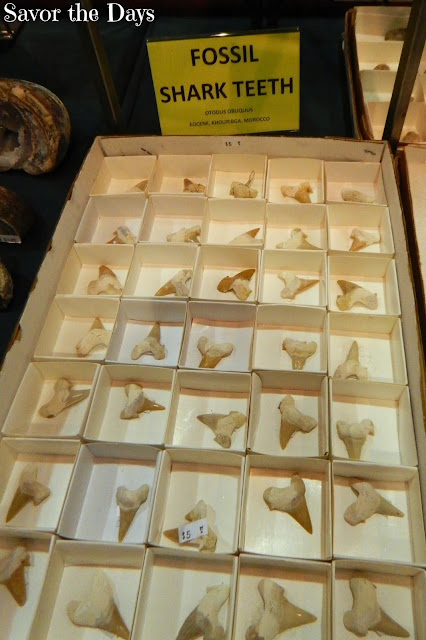 Even some fossilized poop!  I may have one of the few 8 year old girls who actually knows what Coprolite means :) 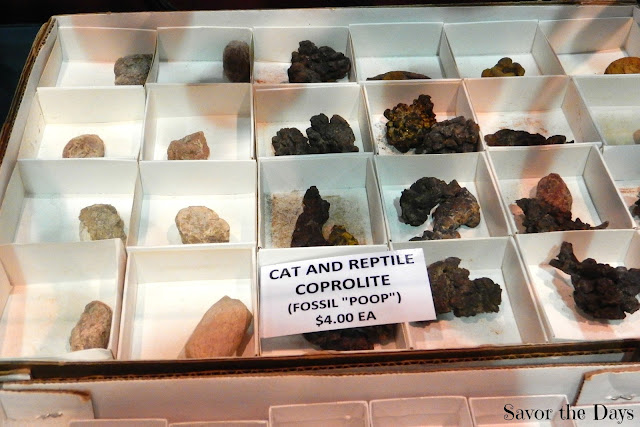 Here is another piece that I think is copper but I'm not sure what the blue streaks are. 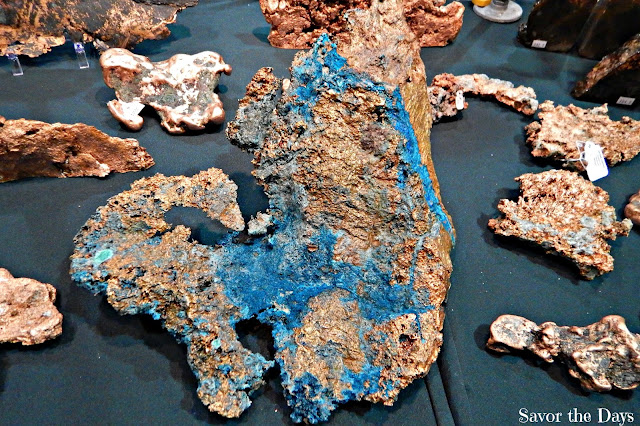 We saw a lot of petrified wood.  It is so interesting because it really feels and looks like rock but it is wood! 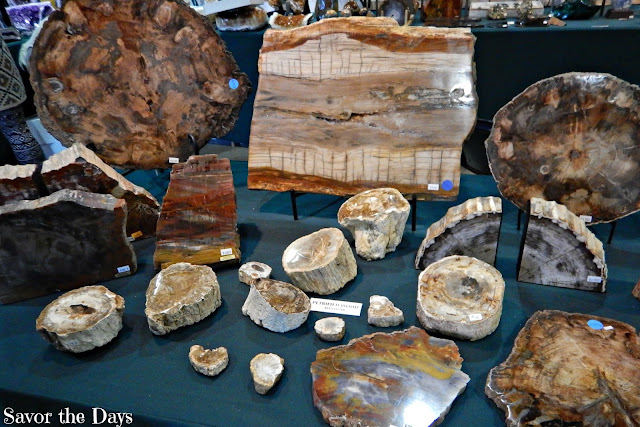 This is a septarian nodule, also known as a septarian concretion.  The name comes from the Latin root septum which means "partition".  It is like Nicholas' quartz crinoid replacement mentioned above.  It was sea creature, probably a crinoid, that died and sank to the ocean floor.  Over time it got covered with mud.  As it decomposed, it released gas that cracked the mud ball and allowed minerals to flow in and crystalize in the gaps of the mud ball. 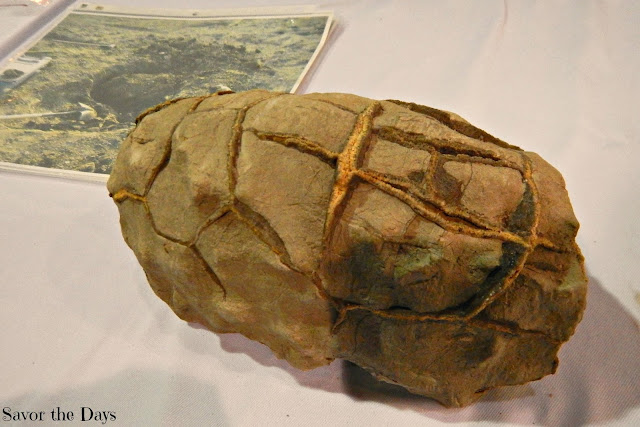 We found a neat little tent in the back of the exhibit hall that held fluorescent minerals.  They look just like regular rocks, right? 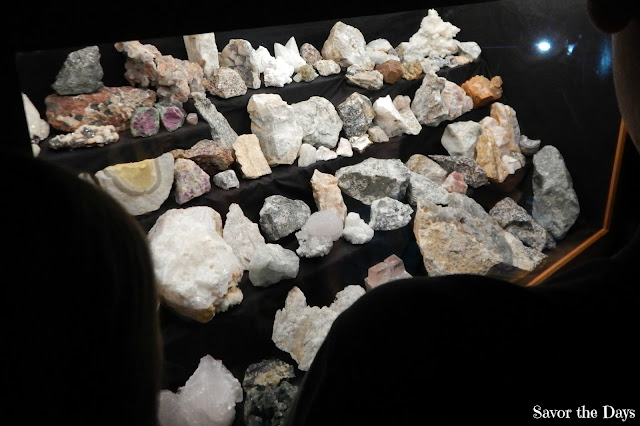 Well turn off the lights and shine UV light on them and look what they do!  Isn't that incredible?  I would have never guessed those plain grey rocks could put on such a bright and colorful show! 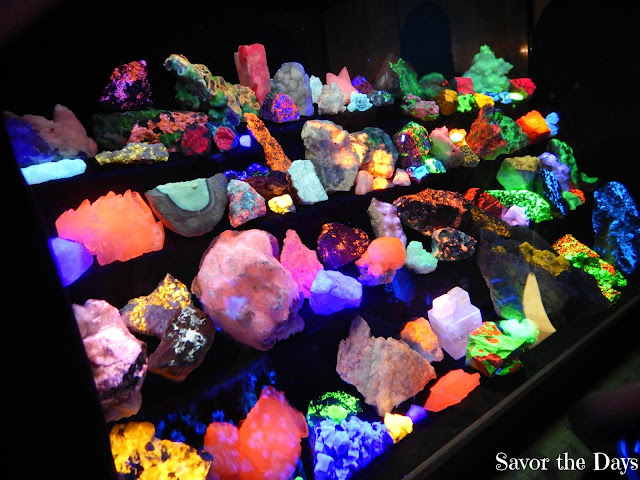 There was even a Kid's Corner with games they could play to win small collections of rocks and minerals.  Plus several tables offered free rocks and minerals for kids that stopped by.  We bought a few things ourselves.

Both Nicholas and Rachel were already interested in minerals and fossils but this show has sparked their fascination to a new level.  I see a geology study in our future homeschool plans!  I imagine we will probably join the Dallas Gem and Mineral Society so we can go to their field trips and meetings to inspire them with knowledge in their new passion.
at November 20, 2016
Email ThisBlogThis!Share to TwitterShare to FacebookShare to Pinterest
Labels: Dallas, field trip, fossils, geology, Nature, Nicholas, Rachel, science