We have always had the kids' birthday parties somewhere away from home like a bounce house place, Chuck E. Cheese, etc.  We have a small house so accommodating a lot of kids can be challenging.  Besides, it is just a lot of work.

But this year Rachel wanted to have a party at home.  But not just any party.  She first wanted a tea party.  Then she said it had to be a princess party AND a tea party.  And there had to be lots of decorations to make it look like a royal castle.  There had to be real tea cups.  Girls should be able to get their nails painted.  And they would play games.  Princess games.  And she wanted everything to be pink and purple with a little bit of turquoise and white and gold for accent colors.

Umm...yeah.  This is why I'd rather just pay some party place to do all of this for me.  It's a lot of work.

Party City and Amazon are my friends.

We put balloons on the mailbox and a big birthday banner on the front window. 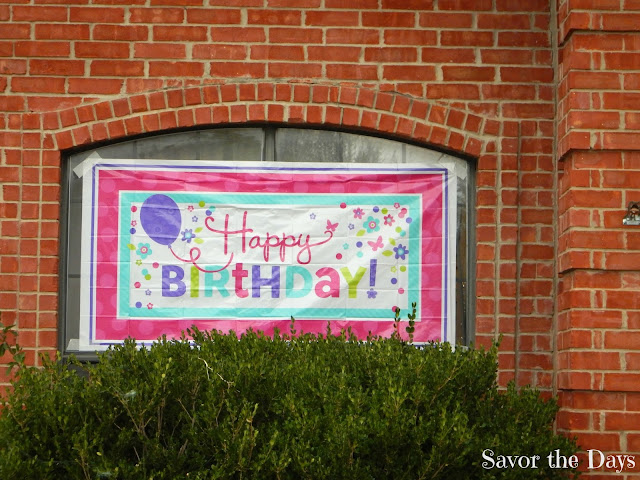 I bought some disposable party table cloths in pink and purple.  I cut them in half lengthwise and we hung up the strips on the ceiling and added some balloons.  Does it look like a royal ballroom? 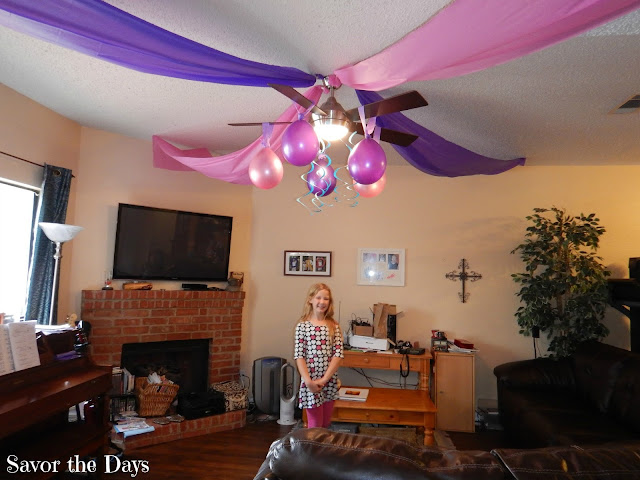 I was going to put up another set of strips so there would be eight total but it was a booger trying to put these up with a ladder when the furniture was all in the way. 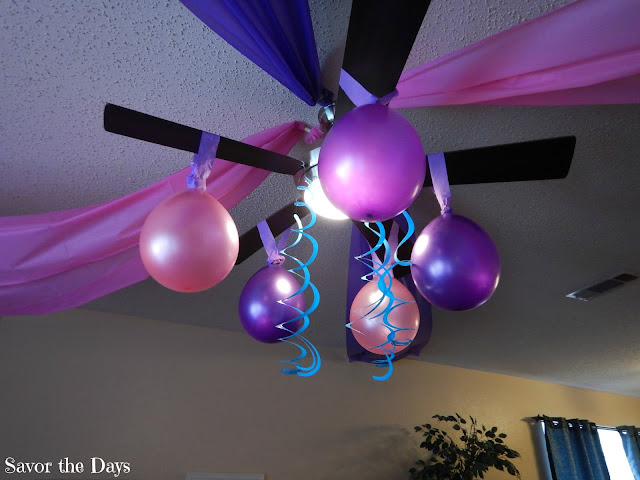 Our kitchen usually has just a small round table for four.  But we needed more space at the royal feast so we put a 6 foot plastic table up and decorated it all up. 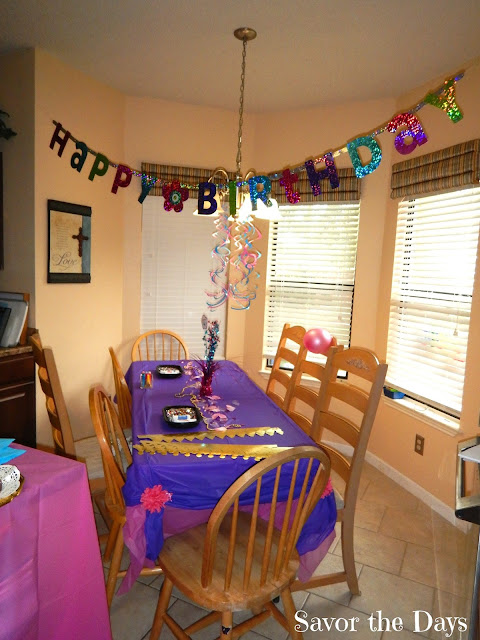 Everyone came in their favorite princess dress.  While we waited for everyone to arrive at the castle, the princesses decorated their own princess crowns. I used these Gold Foil Paper Crowns 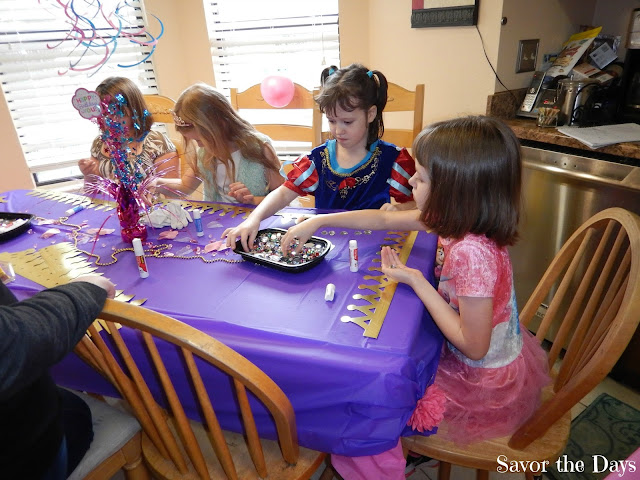 There were lots of colorful jewels and glue stick to add some bling to their crowns. 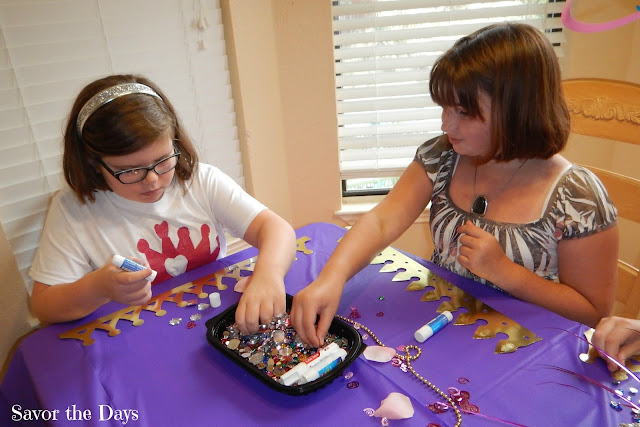 The girls really enjoyed the craft and they spent more time than I had planned getting their crowns to look just right. 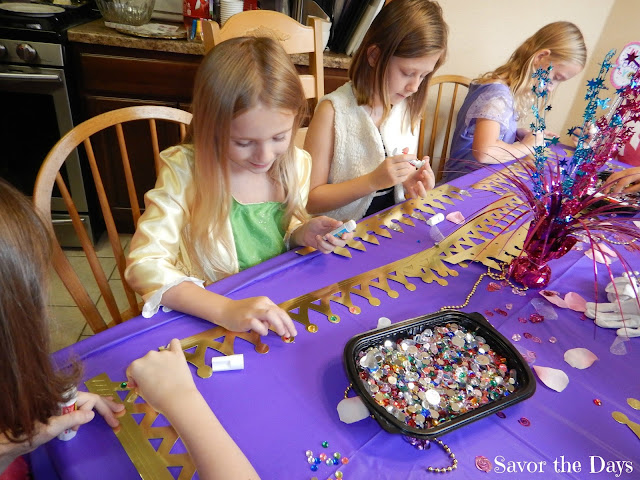 The glue sticks worked ok.  The jewels stuck on and it was more or less mess-free but later some jewels started falling off if the girls hasn't used enough glue.  I wish we had used glue dots or something like that. 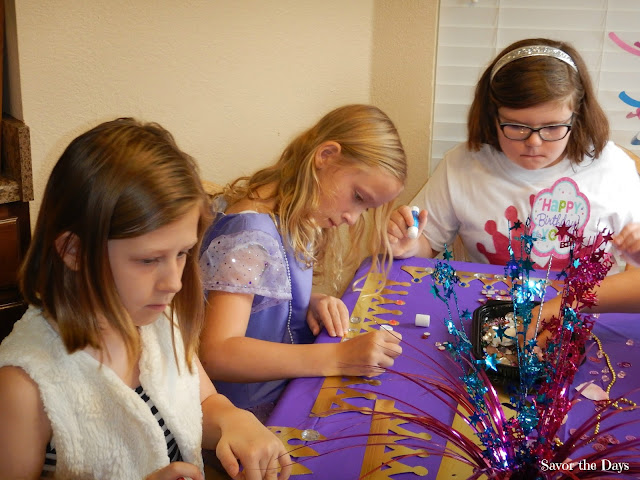 Next it was time for the tea party.  Rachel doesn't like tea though so I made an amazing Princess Punch with vanilla ice cream, cherry 7up, and cherry grape juice.  We had managed to talk Rachel out of using real tea cups because I didn't want to have to clean up any broken glass at the party so I found these really cute paper Tea Time Tea Party Cups at Amazon (affiliate link).  They came

with tea party themed stickers so the girls could decorate their own tea cups.

Rachel didn't want a cake or even cupcakes for her party.  She wanted lemon cake pops dipped in white chocolate.  Yes, this girl knows what she wants!  Since not everyone likes lemon cake the way she does, I also made chocolate cake pops with sprinkles. 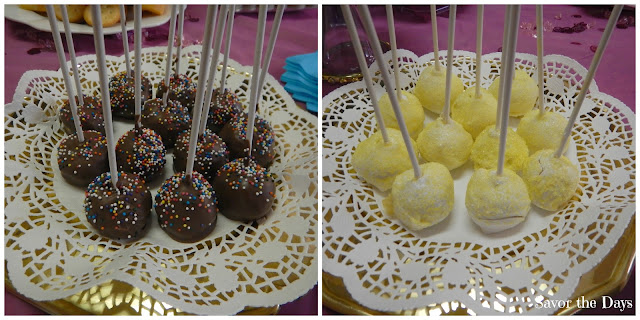 Since I couldn't get a candle to stick in a regular cake pop, I made an especially giant cake ball for the birthday princess. 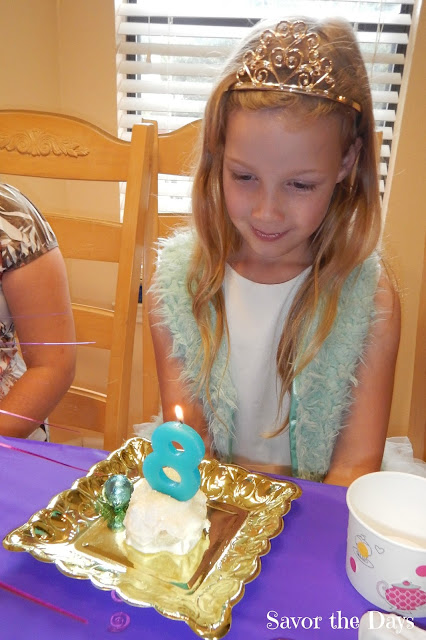 There were also trays of cheese, crackers, ham, and turkey for the little princesses to make cracker sandwiches.  I found the little tiered tray on sale at Home Goods and the cute gold plates were from Hobby Lobby. 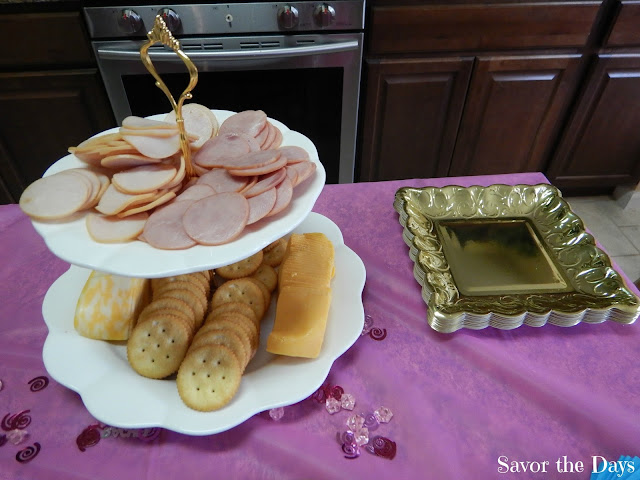 Rachel said there needed to be more sweets so I layered pink and purple jelly beans in a dish and added a little scoop.  I also used some big pretzel sticks and dunked one end in purple candy.  There were some chocolate caramel treats in the turquoise foil. 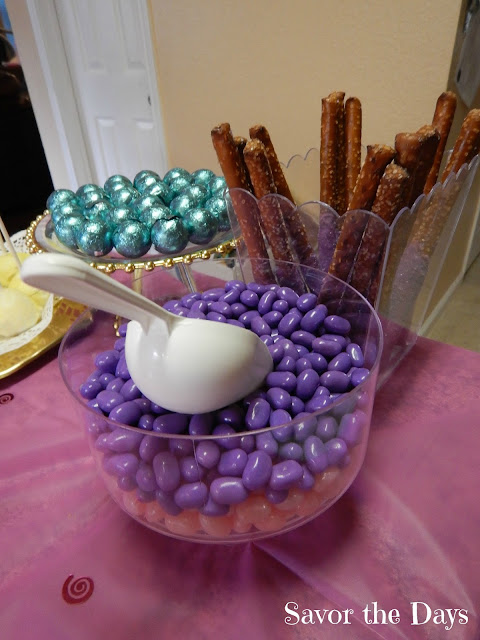 After we sang Happy Birthday and ate our royal snacks, the girls were able to get their nails painted and get some temporary tattoos. 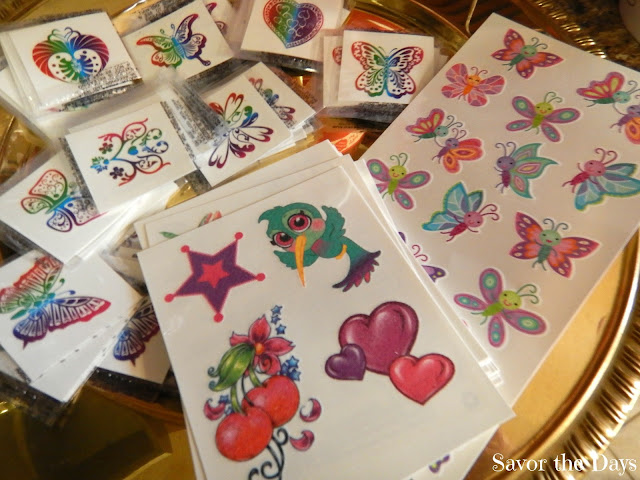 I had planned to give a little workshop on how to curtsy and do a princess wave then we would have a royal parade.  However, the girls just wanted to play with Rachel's dolls.

Rachel opened her presents.  She got dolls and craft kits - her favorite things! 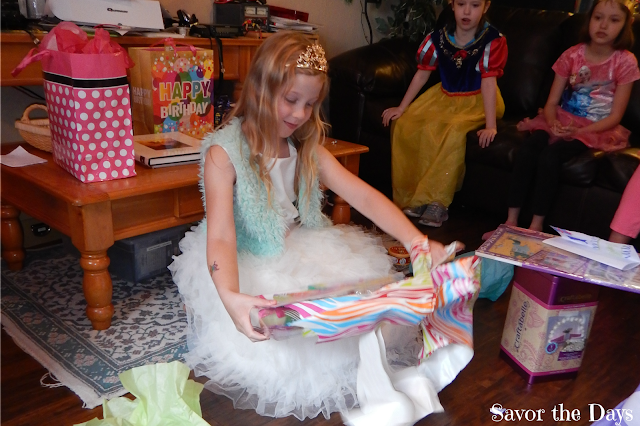 Rachel decided to play piano for her friends. 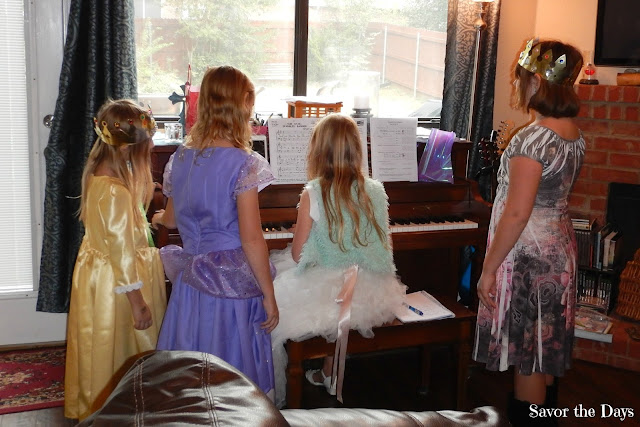 At the end of the party, each princess got a fancy goody bag as they left the castle and headed to their own waiting chariot. 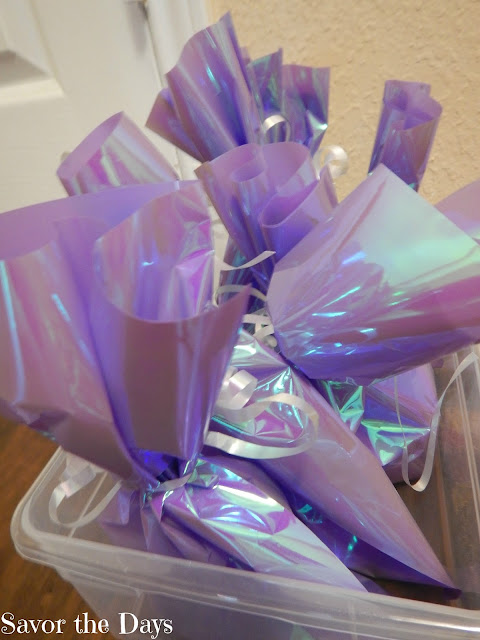 Once Rachel waved goodbye to her friends she danced around the front yard some then plopped down to admire some wood sorrel she found.  She's my little herbalist-in-training! 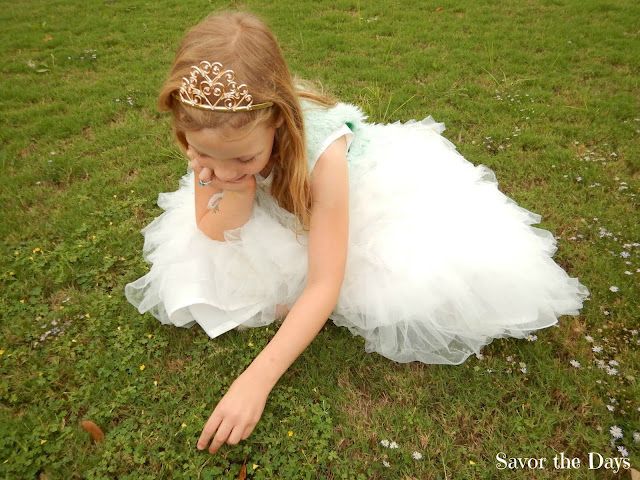