Anywhere But Her Own Bed

Today while Rachel was playing downstairs, she crawled up into her baby doll's crib. She brought with her several babies, several blankets, and a water mister fan like the one big brother took to camp this morning.

She said that she and her babies were going "Night Night". 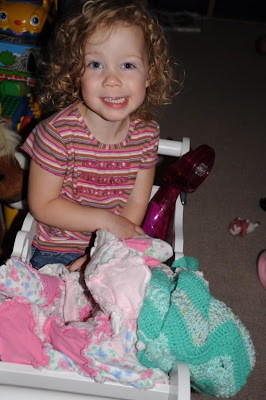 You will notice that she barely has enough room to sit up in the crib, let alone try to sleep in it. But why should that influence the reasoning of a two year old?

Later today we read books and rocked in the glider and I put her down in her bed for a nap. When it was time to go pick up Nicholas from camp, I went into her room to find her like this. 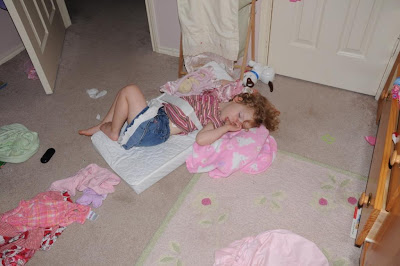 Not only had she pulled out lots of clothing and toys everywhere but she had taken the changing pad down from the dresser, removed the pink cover and then used the velcro strap (which we have never used) to attach herself to the changing pad. Then she went to sleep.

Why can't she just sleep in her own bed?!
at July 13, 2011
Email ThisBlogThis!Share to TwitterShare to FacebookShare to Pinterest
Labels: at home