The Birthday Girl Got Her Ears Pierced {LaLobe Dallas}

Rachel has been wanting to get her ears pierced for several years.  I always just brushed it off and said, "Maybe when you turn 10."  I never really thought it through or talked to Stuart about it.  It was just something to say to get her to stop begging me at the moment. 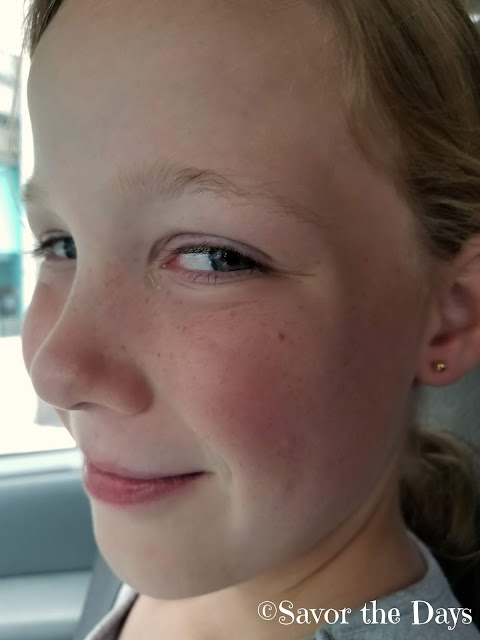 I asked for some recommendations for where to take her to get her ears pierced.  Some said to call her pediatrician's office.  Not all pediatrician offices will pierce ears.  I called Rachel's pediatrician and they do pierce ears for active patients.  However, she hasn't been seriously sick in a long time and we haven't had any concerns about her health so we haven't taken her to well exams in a few years so they no longer have her as an active patient.  I didn't realize that she was no longer active and I did ask for the lady to double check with her supervisor but they still refused to do it because she wasn't active.

I got my ears pierced when I was about Rachel's age.  I remember my mom took me to my pediatrician's office.  The nurse used a piercing gun which was spring-loaded to force the sharp-pointed earring into my ear lobe to make the pierce.  The first pierce was my right ear and it went great.  It felt like just a little pinch.  For the left ear, she pierced it with the piercing gun but the gun wouldn't release.  She tried to pull the sides apart but she couldn't.  She had to go get help and left the piercing gun hanging on my ear lobe!  That was painful.  Fortunately my mom quickly held it up until the nurse came back with help.  Eventually the two of them were able to pull and tug to get it to release.  My ear piercings turned out fine but I did have a lot of pain and even an infection on that left ear.

Now that was probably 35 years ago so technology on those piercing guns has surely improved since then.  However, I did a little research and learned that the piercing gun is not the best way to pierce an ear.  The preferred way is to use a needle.  This allows for greater control on the placement and angle of the pierce.  It also allows for a more sterile environment because they use a single-use sterilized needle rather than a plastic piercing gun that can't be thoroughly sterilized.  Also I would prefer to have a piercing done with someone who is trained specifically in piercing the body and does nothing but piercing as compared to somewhere like Claire's that mainly sells inexpensive jewelry and toys and happens to also do ear piercings by someone who may have just started working there two weeks ago.  Ok, maybe I'm being a little harsh on Claire's but I did call our local Claire's to ask about ear piercing and the girl I spoke to sounded like she could have been Rachel's age and she was a little too bubbly for me to take seriously.

For ear piercings with a needle, several moms have used tattoo parlors because they typically do body piercings as well.  It sounds shocking at first but think about it.  These shops have strict sterilization regulations that they must follow and the artists there usually take a lot of pride in their work and many have studied the human body, circulation, etc. in order to provide the best canvas for their work and the best experience for their customers.  Stuart was a little hesitant when I first mentioned a tattoo parlor but we both agreed that it would be fine.  However, Little Bit didn't like the idea and I completely understand that a tattoo parlor might make the already scary experience even more intimidating for a child.  So I did some research and found LaLobe in Dallas. 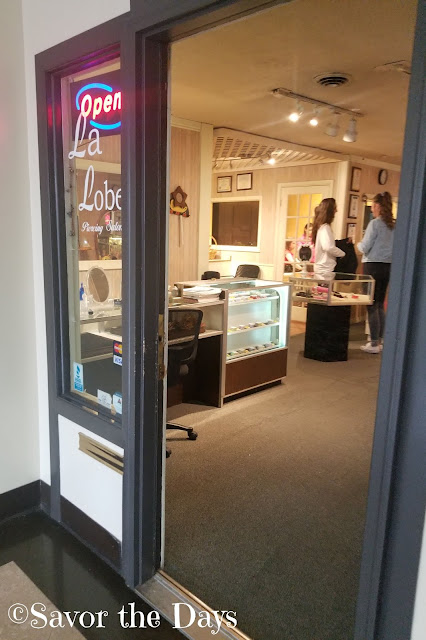 LaLobe is a dedicated ear piercing salon that specializes in working with children.  And they use a needle instead of a piercing gun!  Perfect!  They prefer appointments but they also accept walk-ins.

They charge $39 for the ear piercing if you purchase earrings from them.  If you bring your own then the charge for ear piercing is $57.00.  They require that the first earrings used are 14K gold.  I got Rachel some opal birthstone earrings for her birthday but they are 10K gold so I let her browse their selection of earrings. 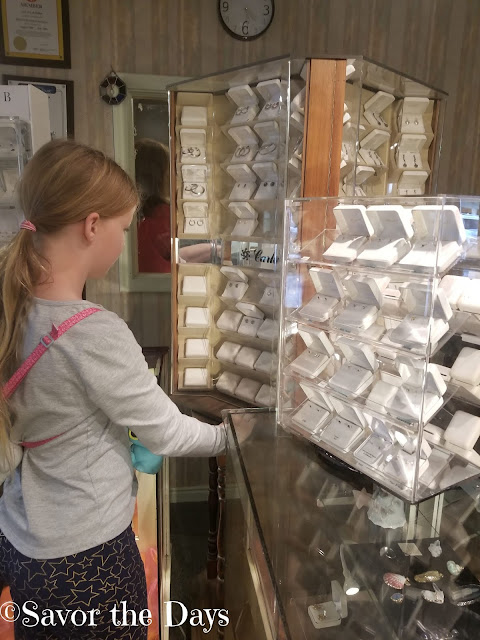 October actually has two birthstones - opal and pink tourmaline.  Rachel thought it would wonderful to buy the pink tourmaline earrings for her first pair so she could have both of her birthstones.  But at $165 I had to say no.  I steered her to the basic $54.00 14K stud earrings. She was ok with this but she mentioned something about earrings on her Christmas wish list.  *sigh* 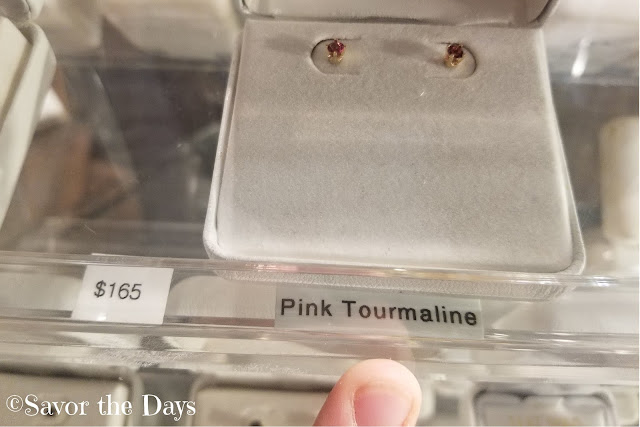 While I was signing some paperwork, Rachel watched two teenage girls get their ears pierced.  They made a big deal of acting scared before hand so I was a little worried about Rachel getting more scared but they calmed down once they were in the chair and neither of them cried when they actually got the piercing.  I think that helped her see that it wasn't too bad.  However, she looked very nervous as she waited for her turn. 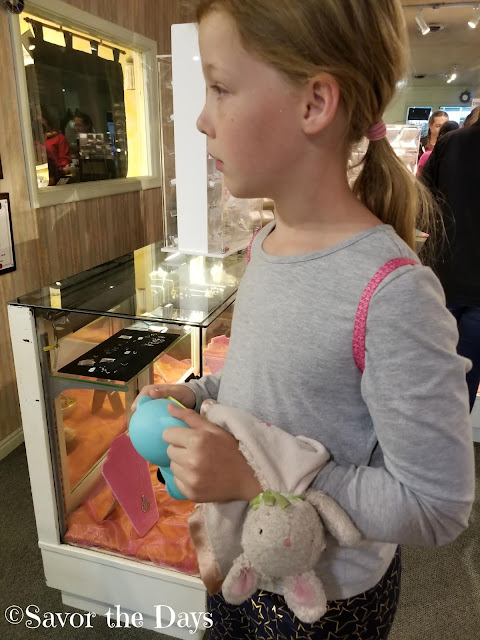 To comfort her Rachel brought a squishy toy that she could squeeze if she needed to and of course she brought Pink Baby too.  She has had Pink Baby since she was an infant and it always comforts her when she gets upset. 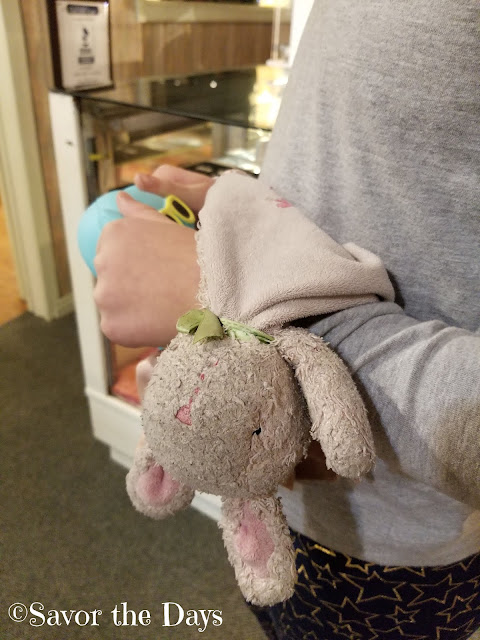 The wait was short and it was time for Rachel to get in the chair.  She was so nervous but managed to give me a smile. 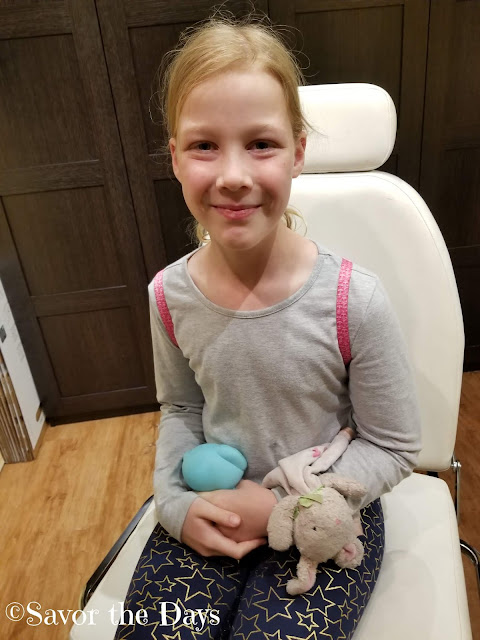 They first measure and mark on the ear lobe where the piercing will go.  Then they use a specially designed "tong" to hold the ear lobe in place.  There is a hole in the tongs that they line up with the marking on the ear lobe.  They use a freeze spray on the ear lobe to numb it and then insert the needle.  Once they remove the needle they put in the earring.  She isn't supposed to remove those earrings for 4 weeks.

She was a little bit more relaxed on the second ear lobe but she still wasn't having fun.  She was brave though and I was so proud of her.


Rachel is so excited to have her ears pierced and Genesis at LaLobe did a great job with talking to her about the whole process and helping her to stay calm. 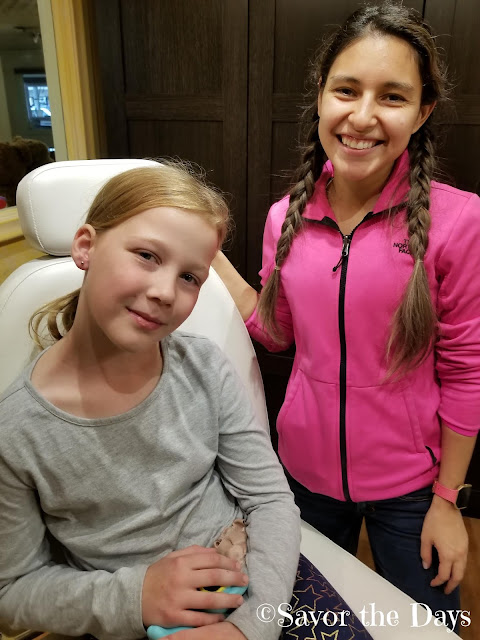 After care:  She had to turn the earrings every hour with clean hands just to help keep the skin from scabbing over the earrings.  After the first day, she just turns them 3-5 times a day and cleans them with a special anti-septic.  The cost of her ear piercing includes a follow up appointment at LaLobe in 4 weeks where they will check the healing process.
at October 22, 2018
Email ThisBlogThis!Share to TwitterShare to FacebookShare to Pinterest
Labels: birthday, growing up, kid's fashion, milestone, Rachel