Since Nicholas is playing high school hockey, he received a free Dallas Stars ticket for High School Hockey Night.  The Stars played the Toronto Maple Leafs.  Yes, it seems weird but the plural of Leaf really is Leafs when it is used as a proper noun.  Additional tickets to the game were just $10 so we grabbed enough for the whole family and a friend. 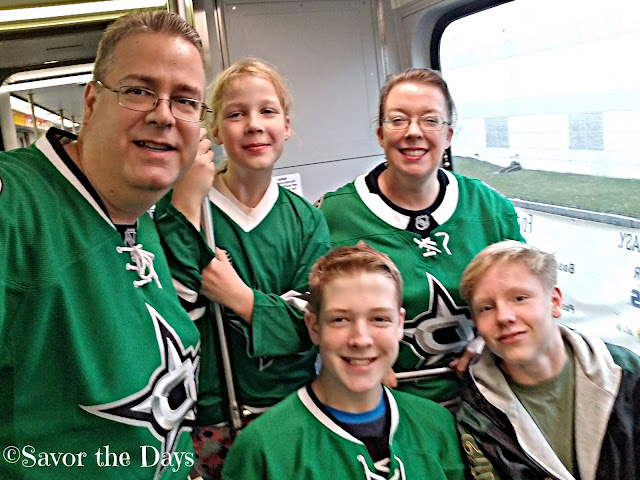 Our seats were about as high up as you could get.  Stuart joked about needing a Sherpa and an oxygen tank!  But we were at a Dallas Stars hockey game so it was all good. 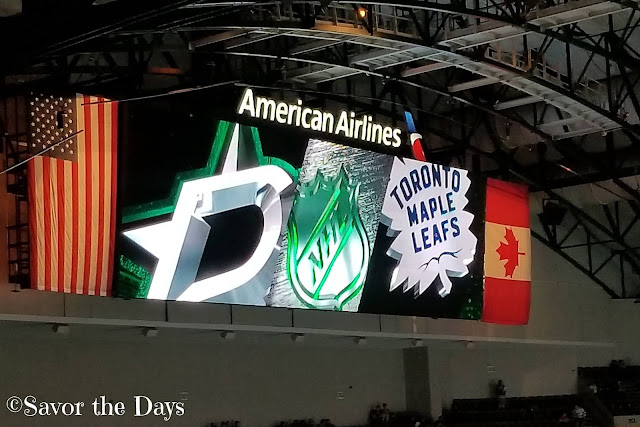 We always try to get to the game early so we can watch the teams warm up.  People haven't gotten to their seats yet so you can walk right up to the glass.  That's close enough to count the missing teeth on each player. (ugh!) 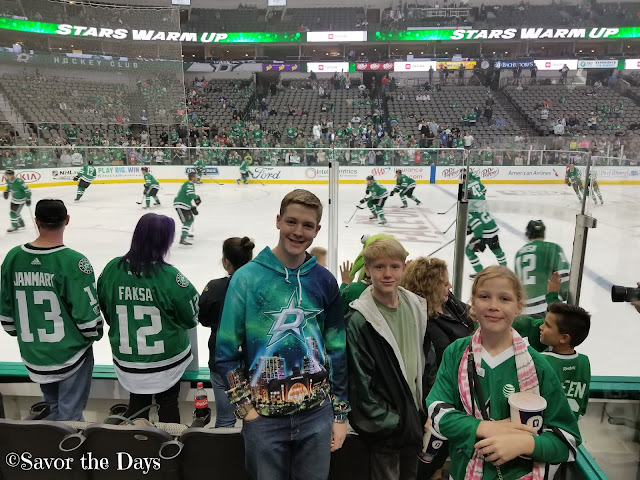 There was a cameraman in our section and he was determined to get Rachel on the Jumbotron.  She was cute in her Stars jersey and jumping around with green pom poms.  I'm amazed Stuart thought to catch it on video.  He's Super Dad.


Nicholas had to explain to his friend a little about how the game of hockey is played but he caught on quickly and was soon cheering like a true Stars fan. 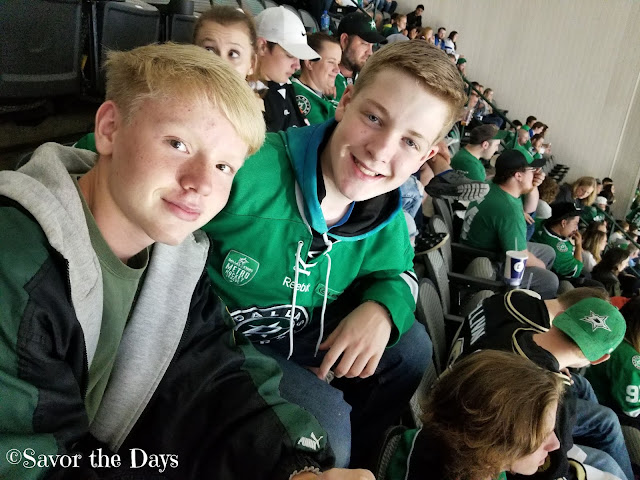 The Stars lost the game but we still had a great time.  As we made our way out of the stadium, we stopped in the gift shop for a bit.  Stuart and Nicholas tried to hide this hockey puck from me.  They know I worry about Nicholas losing a tooth from playing hockey. 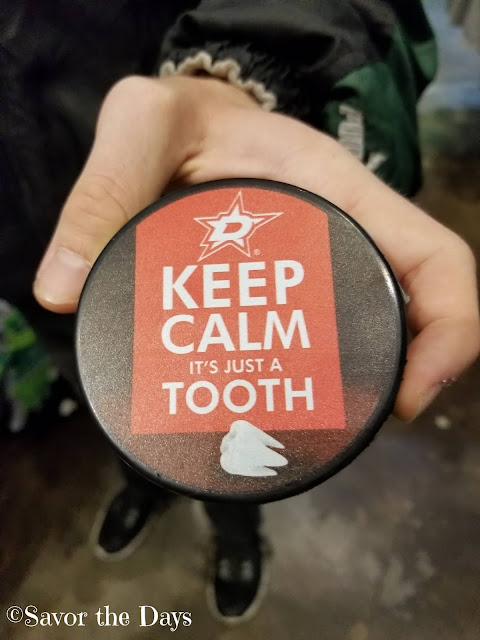 The terminal for the DART rail is right outside the American Airlines Center so it was just a short walk back to the train. 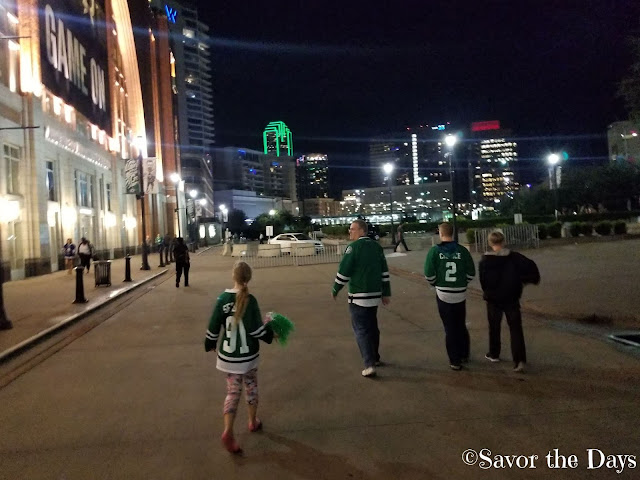 We hopped on the next green line train which is just the one we needed to head back north.  However, we didn't realize that it was not going to the end of the line (our stop).  Instead we learned that it was going out of service about half way along our trip.  This meant that we had to get off at a stop unfamiliar to us (and possibly not in the best part of town) and wait for the next train to come through.  Not our best planning moment but we survived. 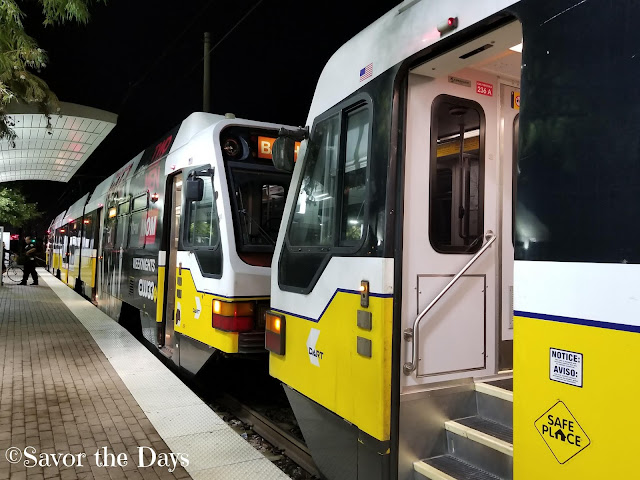 We were scheduled to arrive back to our station at 11:47 pm so you can imagine there weren't many people on the train at that time.  However, Little Bit insisted on not sitting in a seat because she wanted to ride holding a handle like she has seen in the movies.  She was slightly on tip-toe as she stood there but she was determined to do it.  Silly girl! 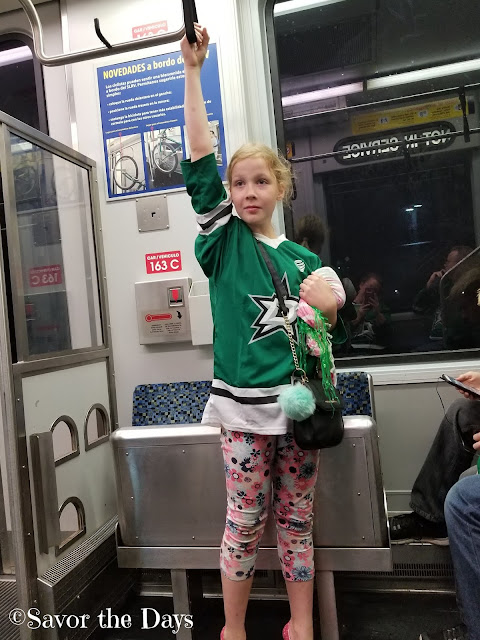 With both kids playing on the Stars hockey leagues, we will get a few more sets of tickets to Dallas Stars games.  As always, I can't wait to go back!
at October 11, 2018
Email ThisBlogThis!Share to TwitterShare to FacebookShare to Pinterest
Labels: Dallas Stars, friends, hockey, Nicholas, Rachel