Behind the Scenes at the Medieval Times TV Commercial Shoot

Medieval Times has introduced a new show this year and we had a fun opportunity to be a part of their TV commercial shoot.  Check in began at 6:45 am.  That is really early for us to be up and in Dallas.  Fortunately, they provided a nice breakfast for everyone. 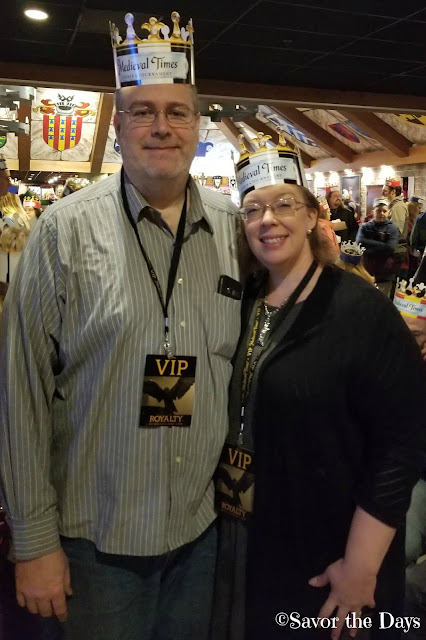 While we were waiting to be seated, Rachel and I watched the queen getting her hair and makeup done.  This was fun because we don't usually get to see this kind of behind the scenes prepping before a show.  Since it was a commercial shoot and not their regular show, we knew to expect a bit of a more casual atmosphere. 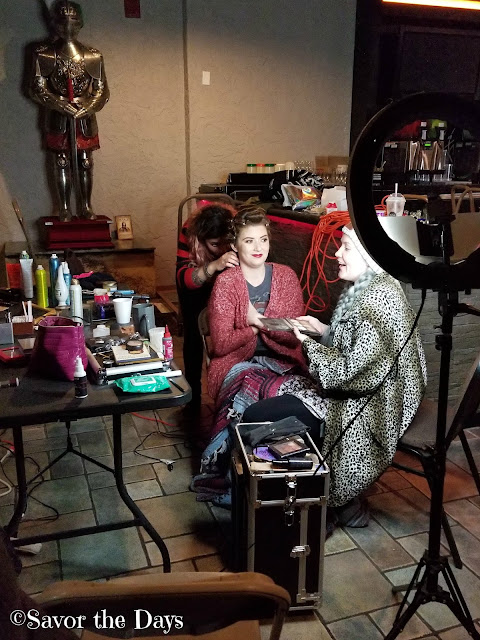 Your seats determine which knight you will be cheering for.  We were seated on the first row in the black and white knight's section.  Of course we donned our black and white crowns.  The production team announced that everyone must keep their crowns on all day and we were asked to check each other throughout the day to be sure that the words "Medieval Times" stayed centered on our head in case we were to appear in any of the camera shots. 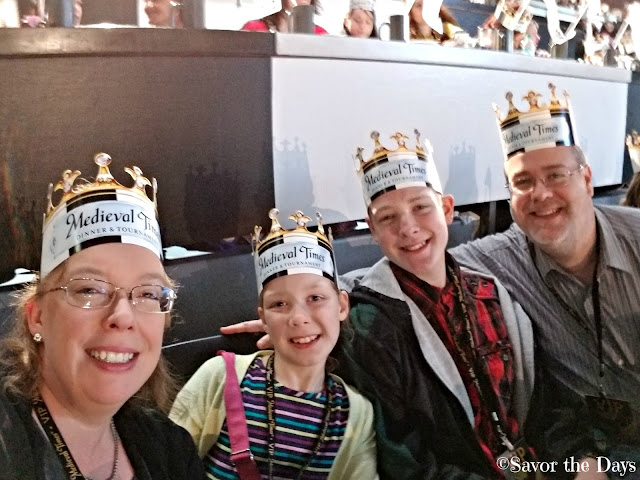 As people were still being seated, we enjoyed looking at the additional things being set up for the commercial shoot that aren't usually a part of the show, like the camera car and the giant overhead skrim to diffuse the light. 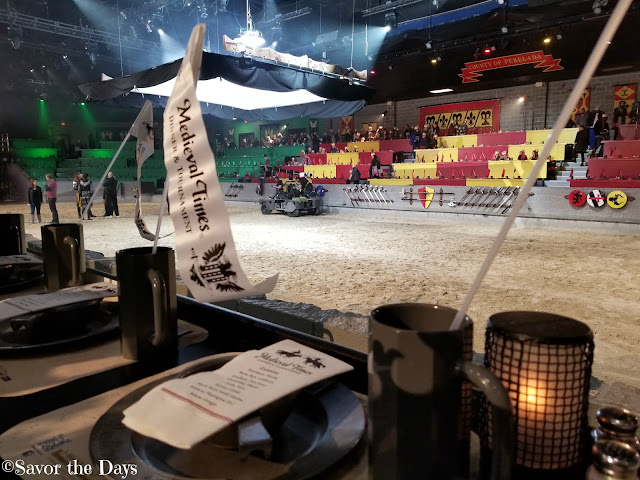 The camera car was the camera most used in the shots.  It held two people - a driver and a camera operator.  The camera operator could adjust the arm in all directions as they followed the action around the arena.  The camera was in a gyro stabilizer so even as the car went over bumps in the sand, the camera remained relatively steady. 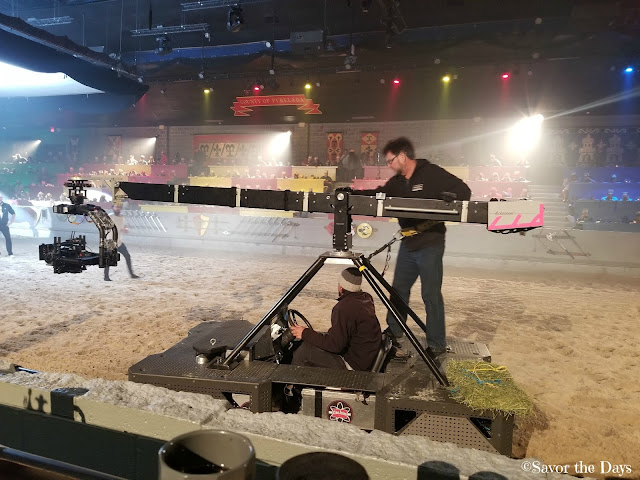 The actual Medieval Times show has a whole story line to follow but since this was just for the commercial shoot, they only performed bits and pieces of action scenes for the camera.  We watched several knights jousting as the camera car followed them along.  Here is a video of our black and white knight jousting with his rival, the red and yellow knight.


There was a lot of repeating scenes and a lot of waiting as the crew discussed the scene and tweaked the camera or the performers. 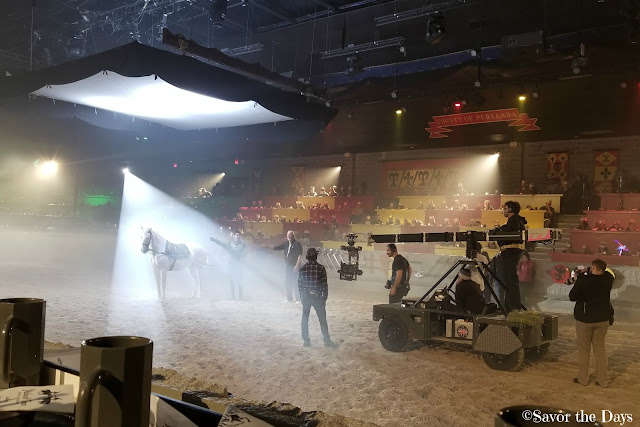 They brought in another kind of camera attached to a large drone to get overhead action shots.  I heard it looked like the DJI Inspire which is a VERY NICE drone.  The drone operators were careful not to spook the horses with it though. 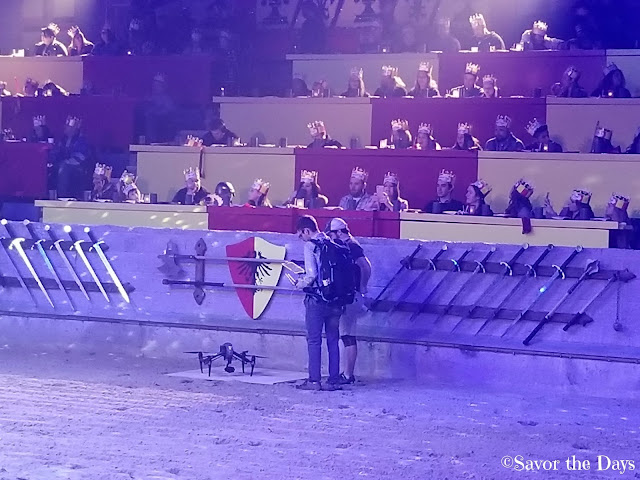 At lunch time, we were served a box lunch.  I was sad because I was really hoping for the standard Medieval Times meal.  But then we heard that they were going to serve that for dinner.  This was a nice surprise because I didn't even know we were getting dinner too! 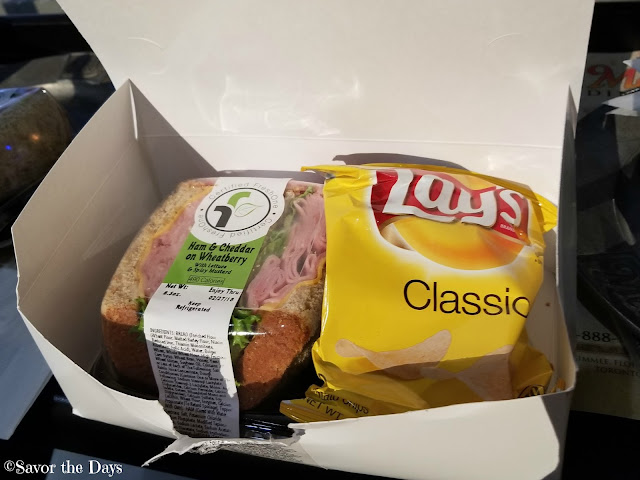 Here is another shot of the horses and camera car in action.  I think it would be fun working on that camera car.


In addition to the jousting, there were also several scenes of sword fighting. 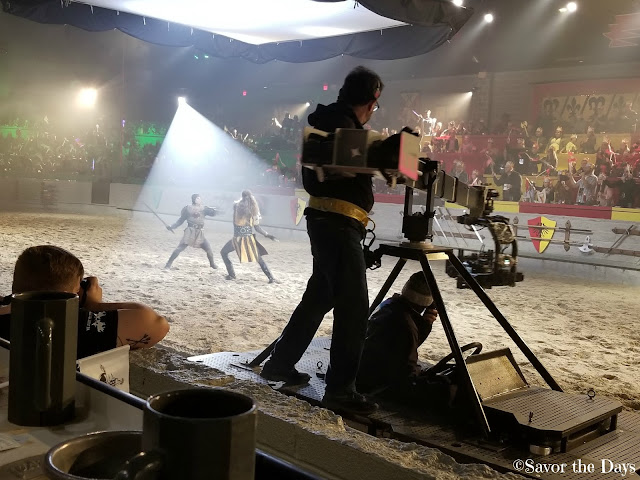 They used this other camera strapped to a man for a few shots.  It also seemed to have a gyro stabilizer on it. 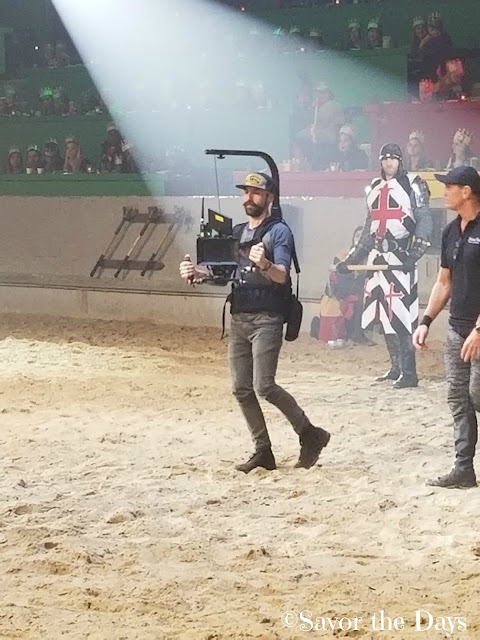 The commercial shoot was planned to take 12 hours which is a long time for anyone, especially wiggly kids.  We were allowed to bring books and tablets to keep us entertained between shots.  But it was also nice to just have time together. 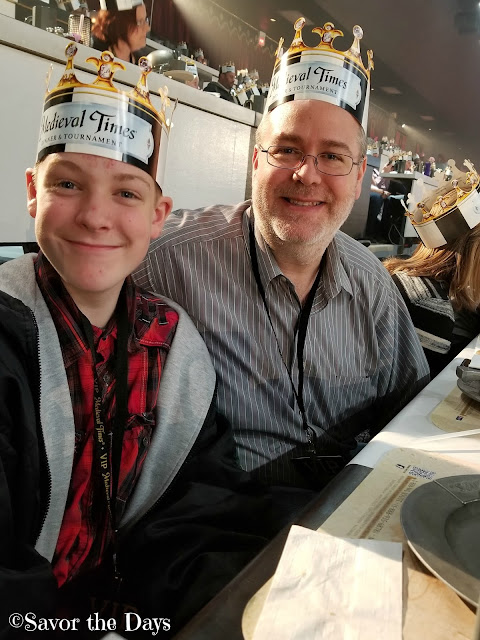 We finally met the Queen!  In the 34 years since Medieval Times has been jousting, there has never been a queen in the show.  I'm excited to come back and see the new story line with the queen. 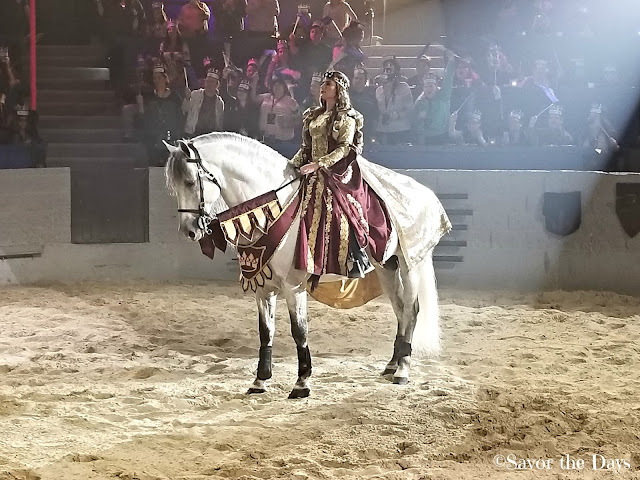 We heard from our server that they would be serving dinner soon.  Oh, I do love dinner at Medieval Times.  It is simple food but it is delicious. 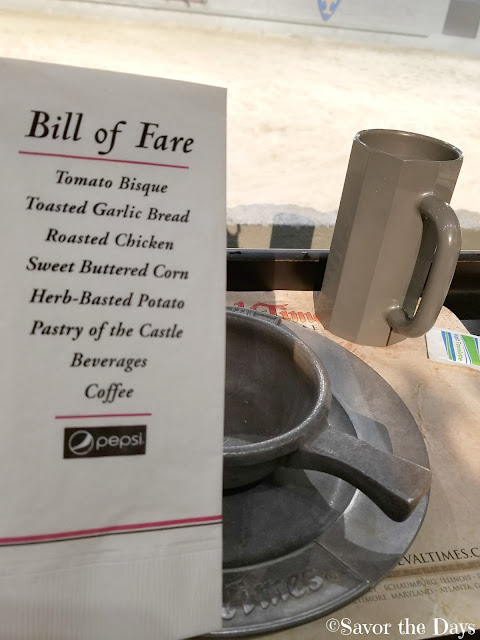 Of course, in keeping with the time period, you aren't allowed to have any utensils so you eat everything with your hands or sip from a bowl. 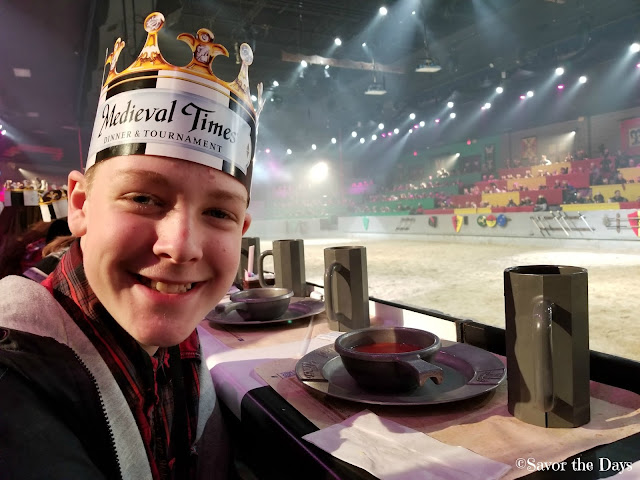 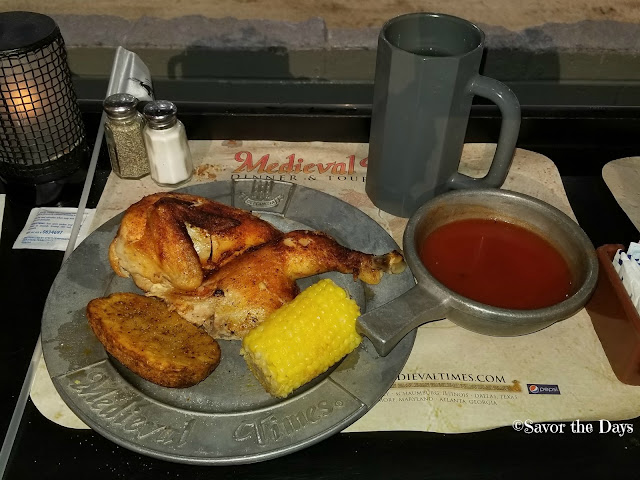 For participating in the commercial shoot, we were each given a swag bag.  Each bag contained a Medieval Times themed t-shirt, drink koozie, 2 rubber bracelets, and most importantly, two FREE tickets to come back and see the new show! 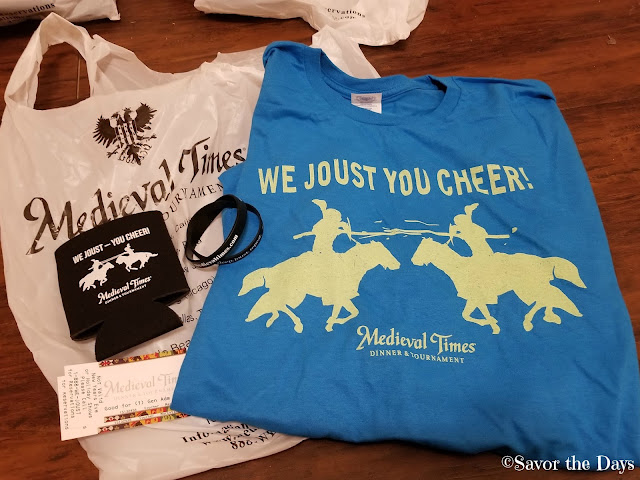