Last year, we won a raffle drawing at our children's theater.  The prize was a gift certificate for a sunset sail on Grapevine Lake!  We waited until the weather warmed up and the storm season was mostly over before trying to use it.  We contacted the owner and was told that we could even take the cruise on Friday night and watch the weekly summer fireworks show at the Gaylord Texan resort from the boat! 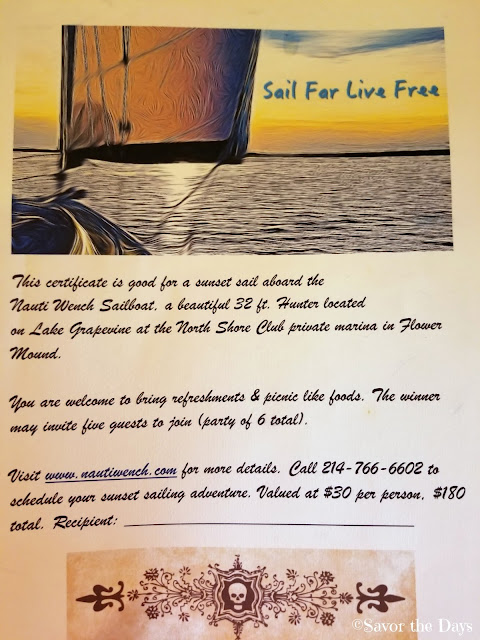 Since it is a sunset cruise, we were told to pack a picnic dinner to enjoy on the boat.  We stopped at Subway on the way to the marina and got some subs to go.  Rachel has only been on a boat one time and she was itty bitty so she doesn't remember it.  Although she had been excited when we told her we were going on this sailboat, apparently she had been worrying a lot about it and had a tummy ache by the time we got there.  We talked for a while and she said she thought she was ok to go so we headed on out to the boat. 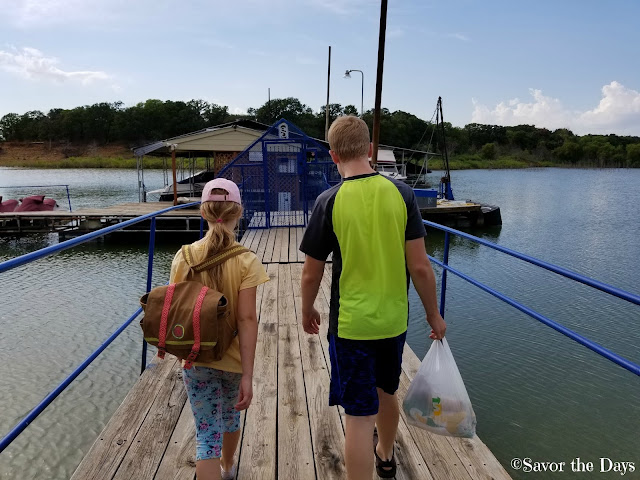 We were excited to get settled in a on our way. 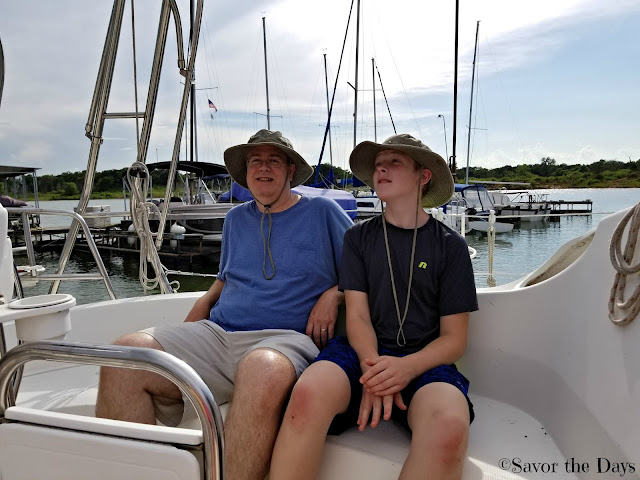 Even Rachel quickly got over her fears and her smile beamed from ear to ear just minutes after pulling away from the marina. 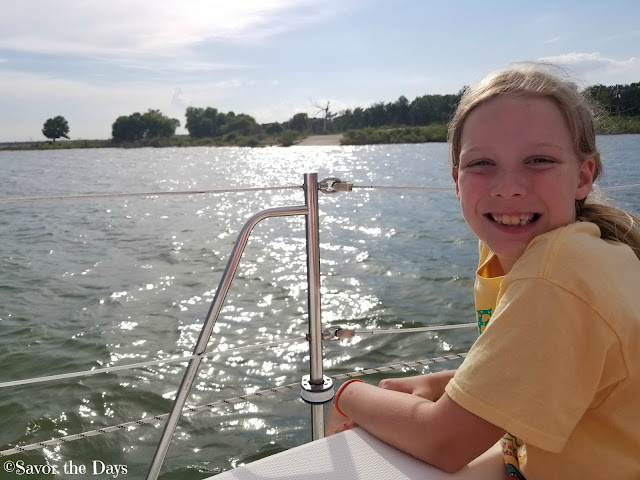 The waters were calm and the day was absolutely perfect to be out on the lake. 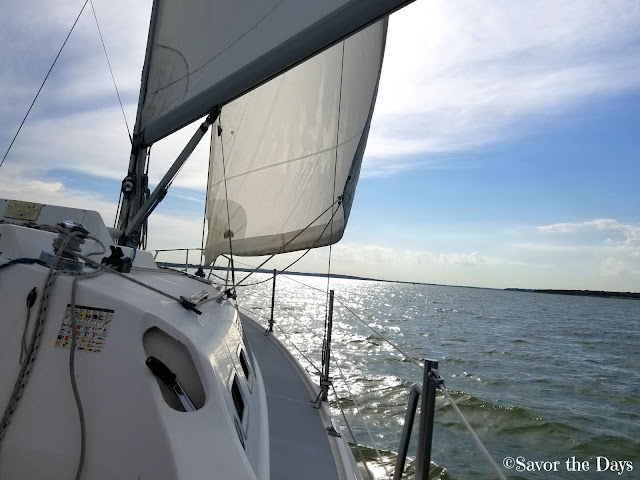 Stuart took sailing lessons back before we had kids so I know he was having a good time being out on a sailboat again. 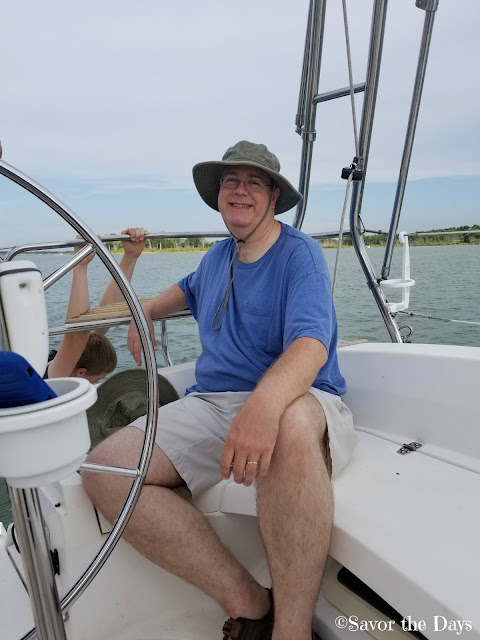 There really is nothing like being on a sailboat. 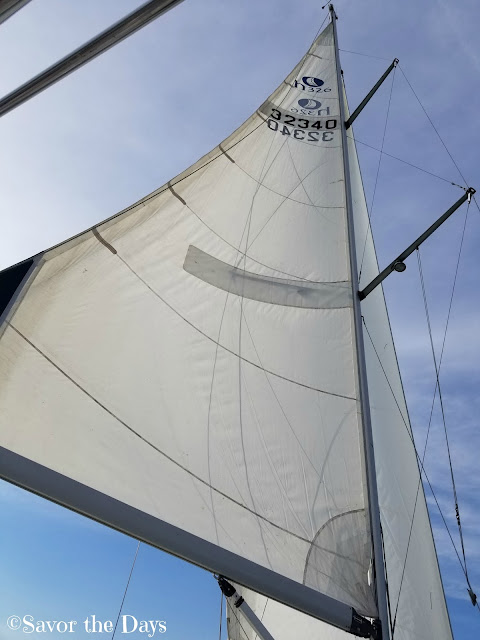 The kids explored the bow of the boat.  Rachel was loving it! 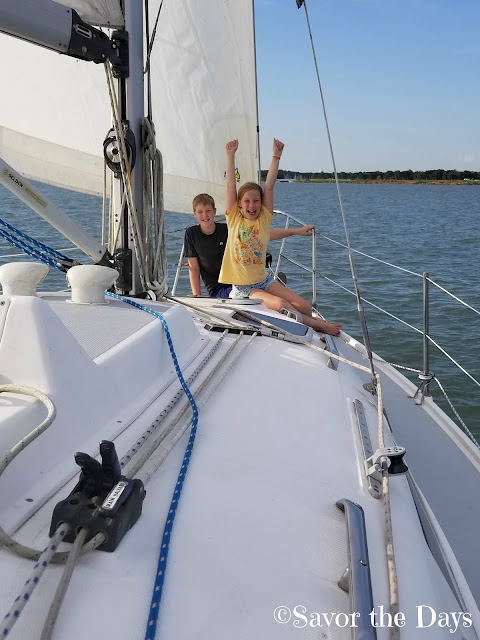 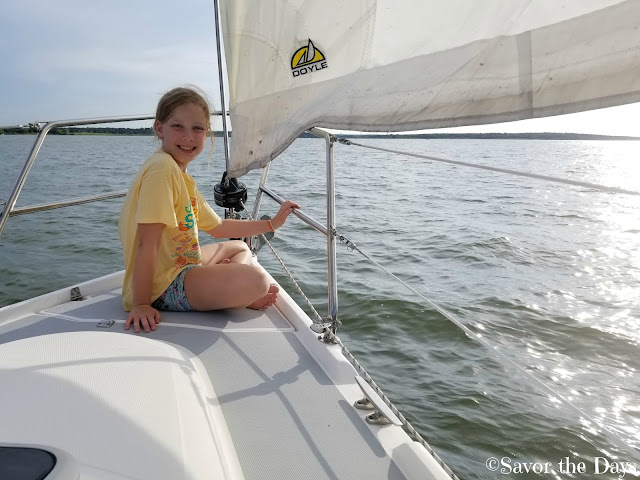 There is a cabin down below with sleeping quarters, kitchen, bathroom, etc. 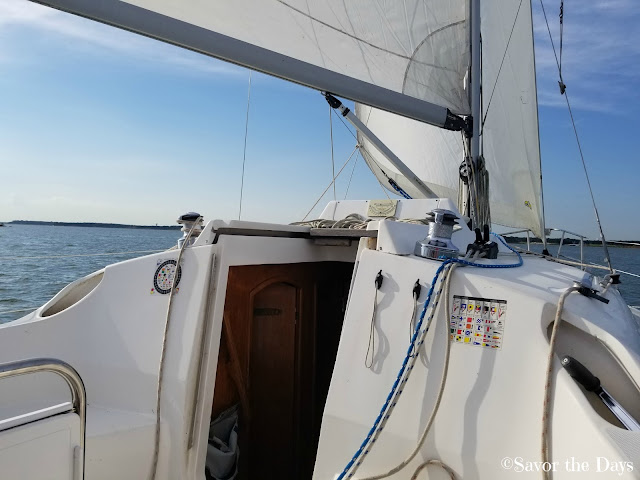 It was really the most relaxing thing we've done in a while - just enjoying the lake and each other. 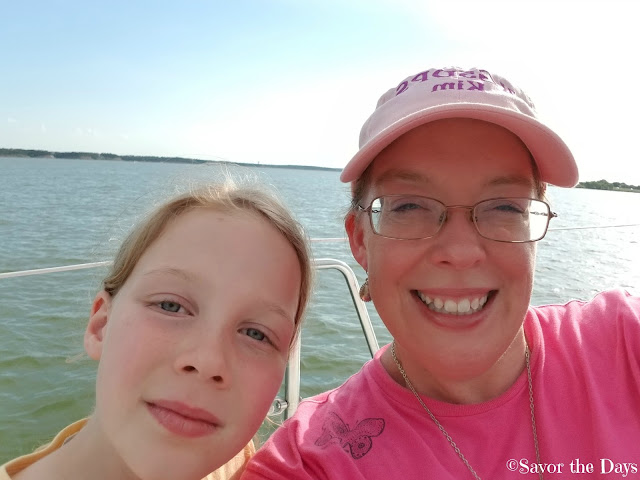 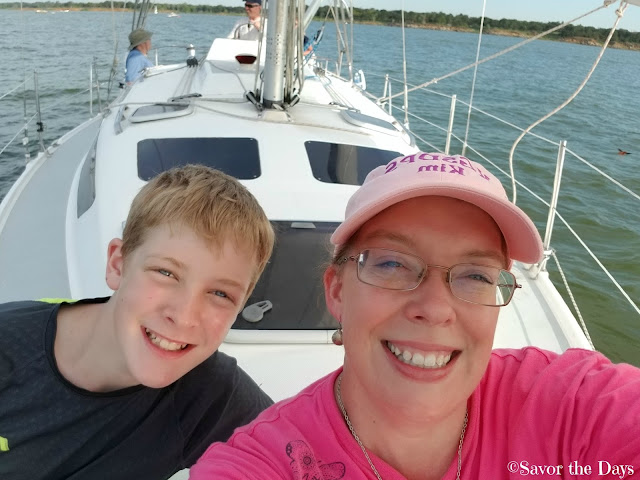 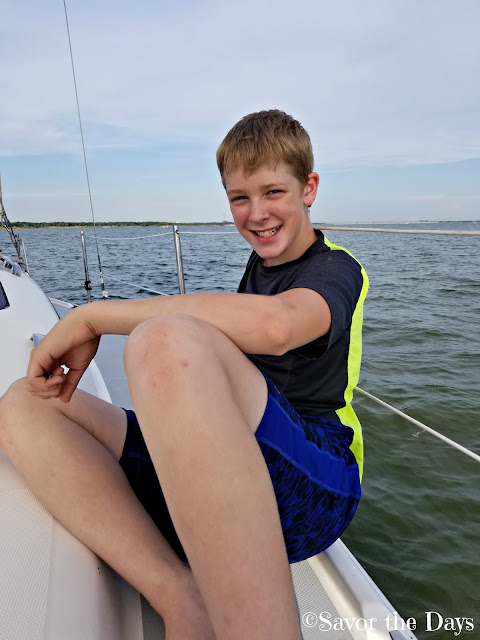 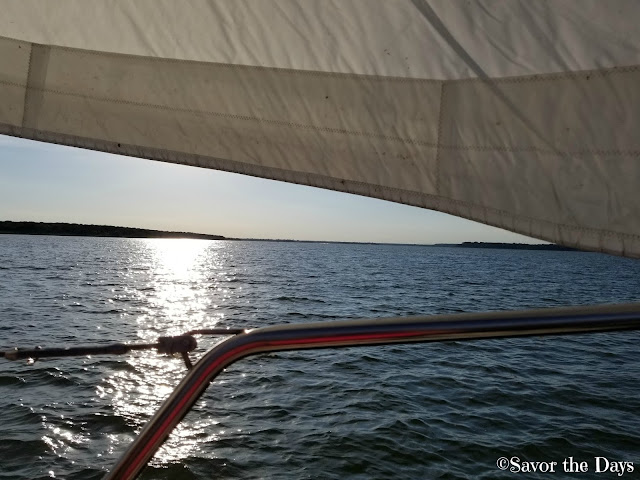 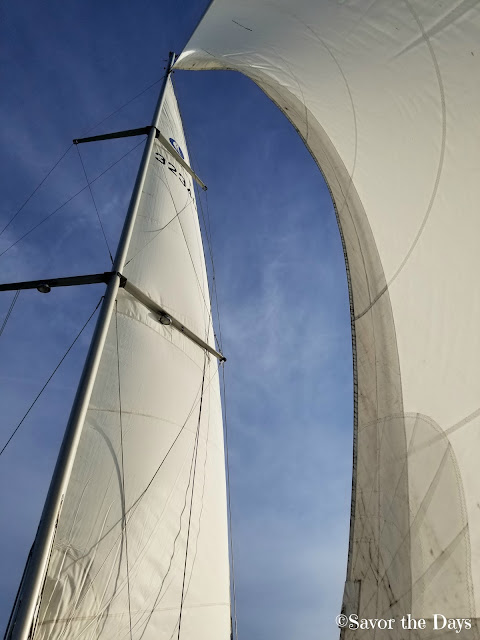 At one point, the captain offered to let Nicholas steer the boat.  Of course, he said yes. 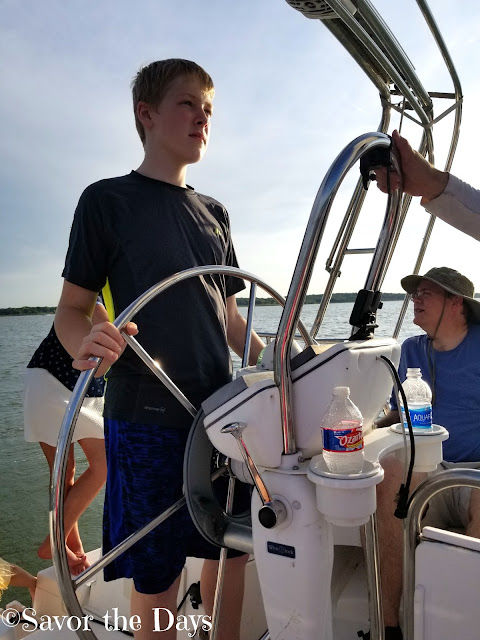 Nicholas learned how to use the instruments way up on the tip of the sail to help him stay straight on course.  What a great experience! 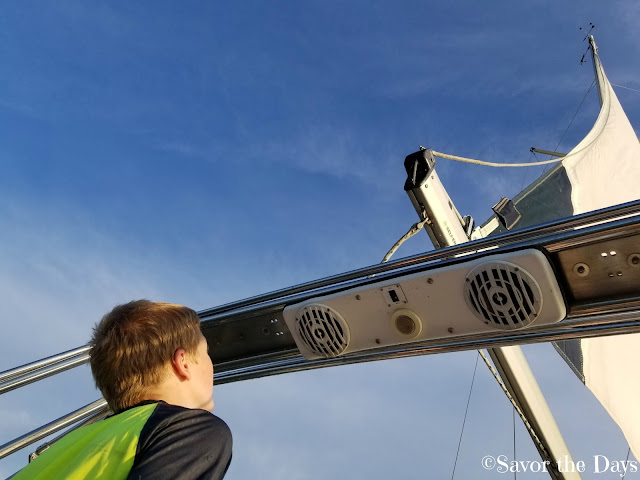 There are some incredibly beautiful mansions situated on this lake.  Wow! 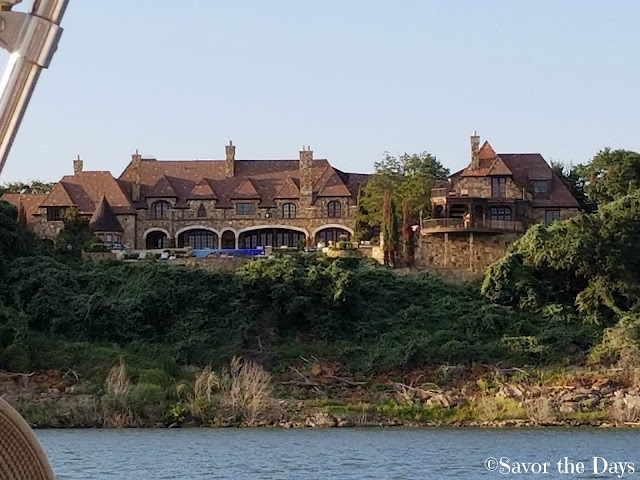 As we sailed on, the sun started going down in the sky.  It was really pretty to watch is set over the water. 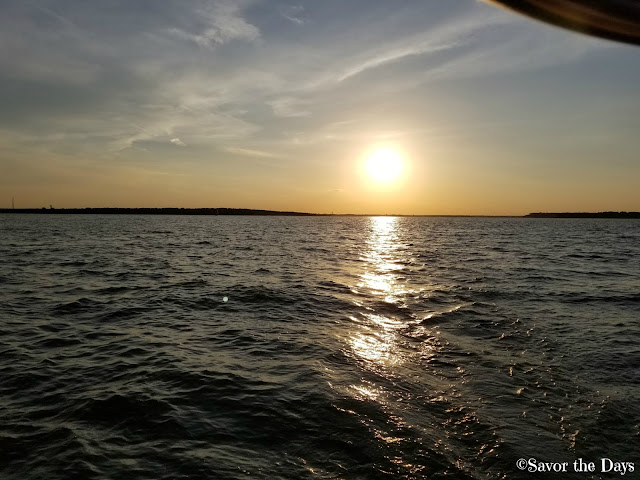 I caught Nicholas, aka daredevil, hanging off the back of the boat.  He is always a thrill seeker. 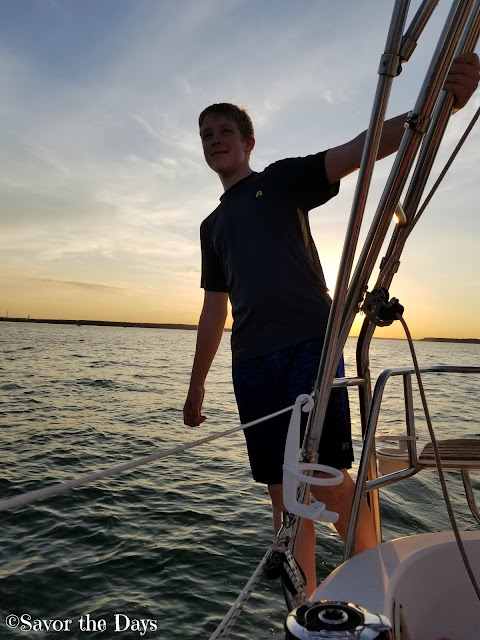 But Mommy had to squash that adventure and I made him take a seat. 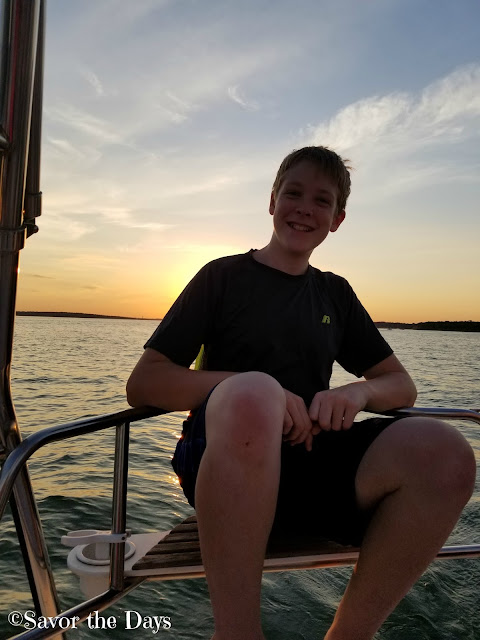 As the sun went down some more, we pulled out our dinner and enjoyed it while watching the breathtaking sunset.  No camera filters or Photoshop skills necessary. 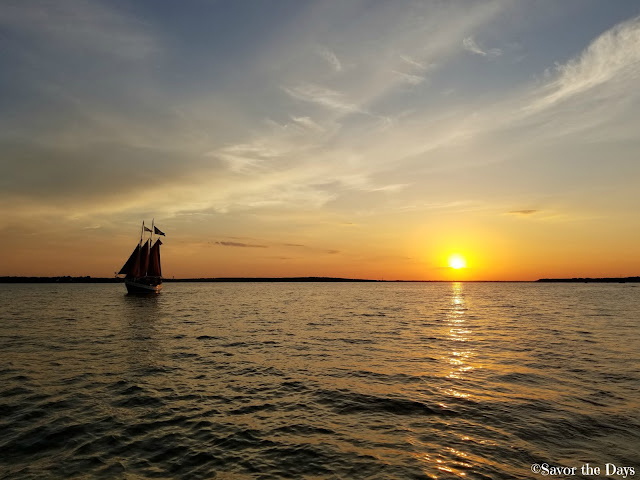 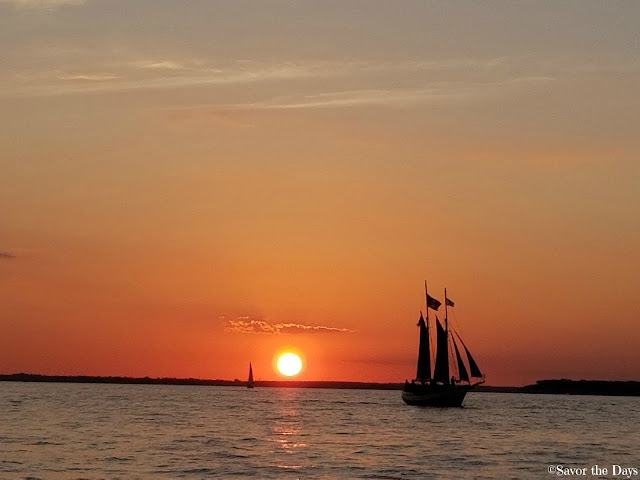 As we made our way to the area of the lake in front of the Gaylord Texan where the fireworks would be, the sun completely went down and the moon came out. 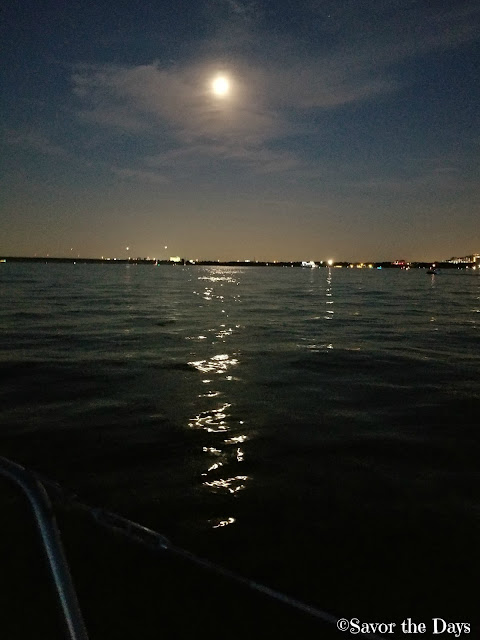 The fireworks show was definitely amazing to watch from the lake.  The reflections on the water made it all even more brighter and colorful. 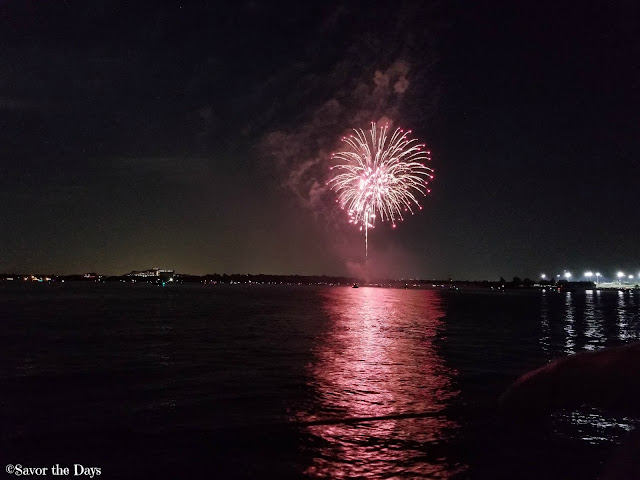 As we headed back to the marina, I caught my boy hanging off the side of the boat again.  Of course, I had to take that picture before making him sit back down. 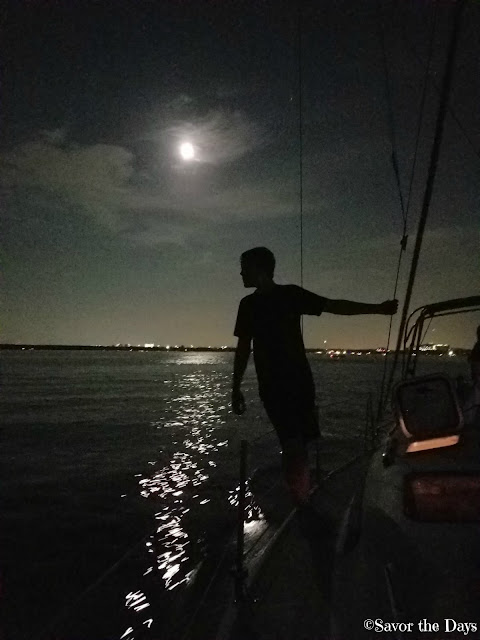 I had forgotten to take a picture of the boat when we first arrive so here it is at night. 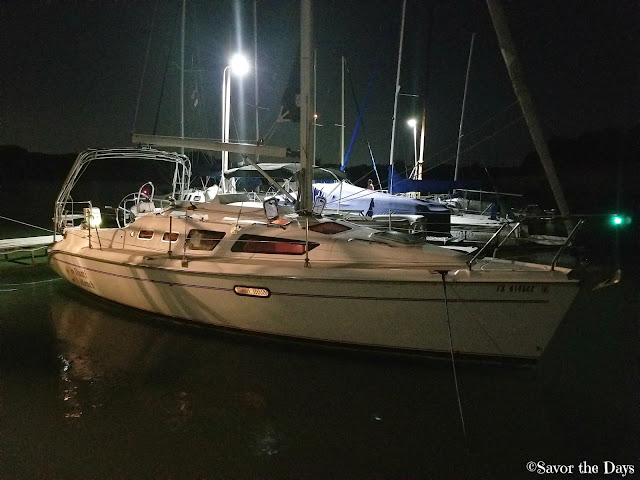 It was an incredible evening that we won't soon forget.  Wow, that was the best raffle prize we've ever won!
at July 07, 2017
Email ThisBlogThis!Share to TwitterShare to FacebookShare to Pinterest
Labels: family, family friendly, field trip, Nicholas, Rachel, silly kids, Stuart