Using a Ham Radio License at the Plano Balloon Festival

I recently wrote down my Bucket List and have been very slowly working on goals that I would like to accomplish before I "kick the bucket".  One of those goals was to get my ham radio license.  My uncle has been into ham radios for as long as I've known him.  I can recall spending this night at his house when I was little and peeking into a little room he used as his "radio shack".  I was amazed at all of the cool equipment but had no idea what it was all about.

Years later my dad got his ham license and started telling me how he talked to people around the world and even astronauts on the International Space Station!  How cool is that??

But there is more to having a ham license that just chatting.  When Hurricane Katrina hit south Louisiana where my and my husband's family live, we were unable to reach most of our family members by phone for about a week because either the lines were down or they were just too congested.  However, with ham radios, we would have been able to keep in contact with them.  That would be so reassuring.  There are also many ways that local organizations can use volunteer ham radio operators in crisis situations such as search and rescue and medical assistance.

We had a neat opportunity to use our new licenses at the Plano Balloon Festival.  They use ham radio operators on the field, in balloon chase crews, and to promote the event around the world to other ham operators.  We took on the last role and each of us helped to log contacts made about the balloon festival. The local ham radio club had a trailer set up at the event with two high frequency radio set ups and this is where we hung out for our 2 hour volunteer shift. 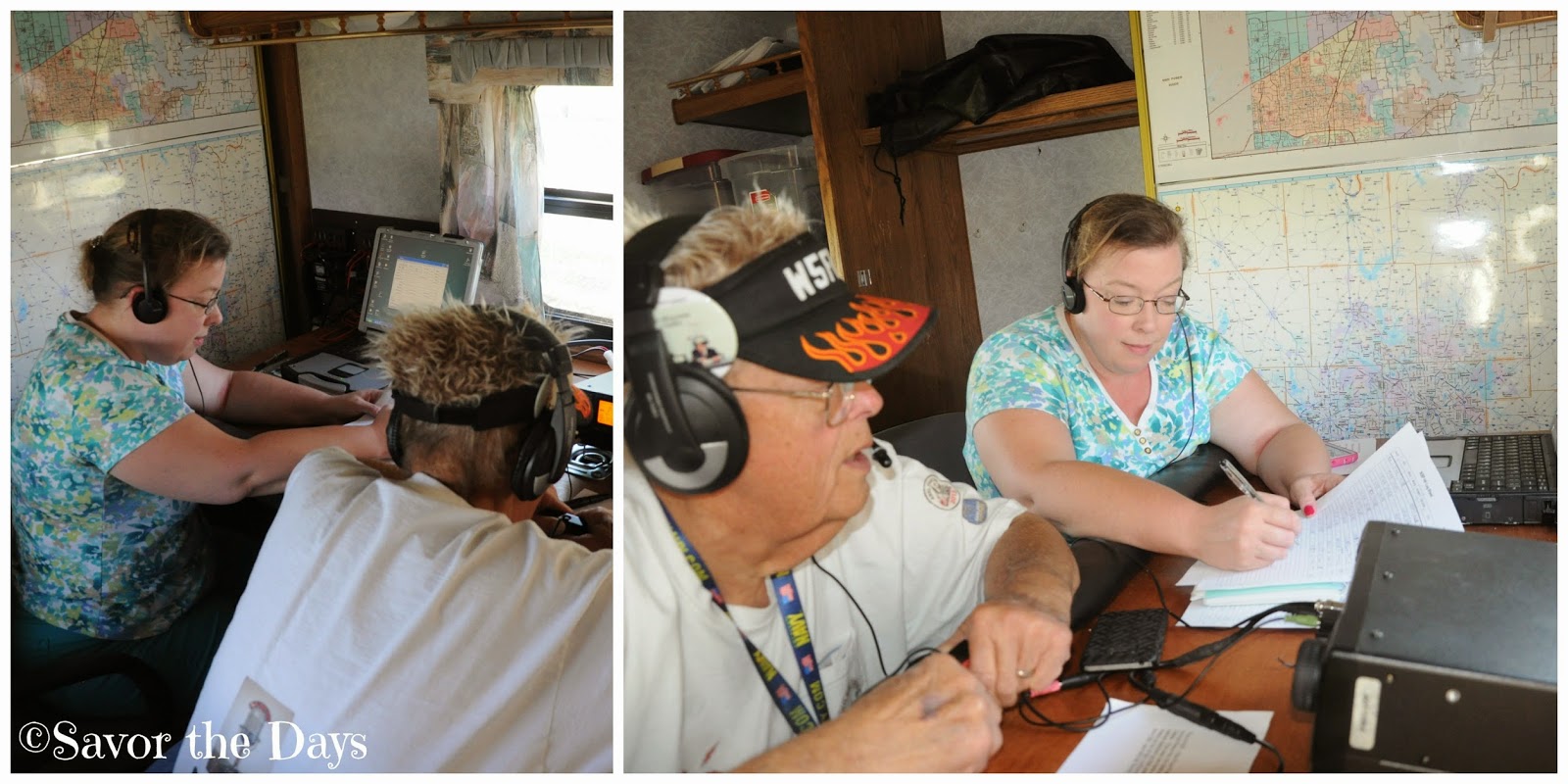 As loggers, we would listen in to the conversation that the controller was having with a contact somewhere else.  We would fill out a form to show the person's name, location, call sign, and how well they could hear us from where they were.  We spoke to people across the country and even in Quebec and Montreal! 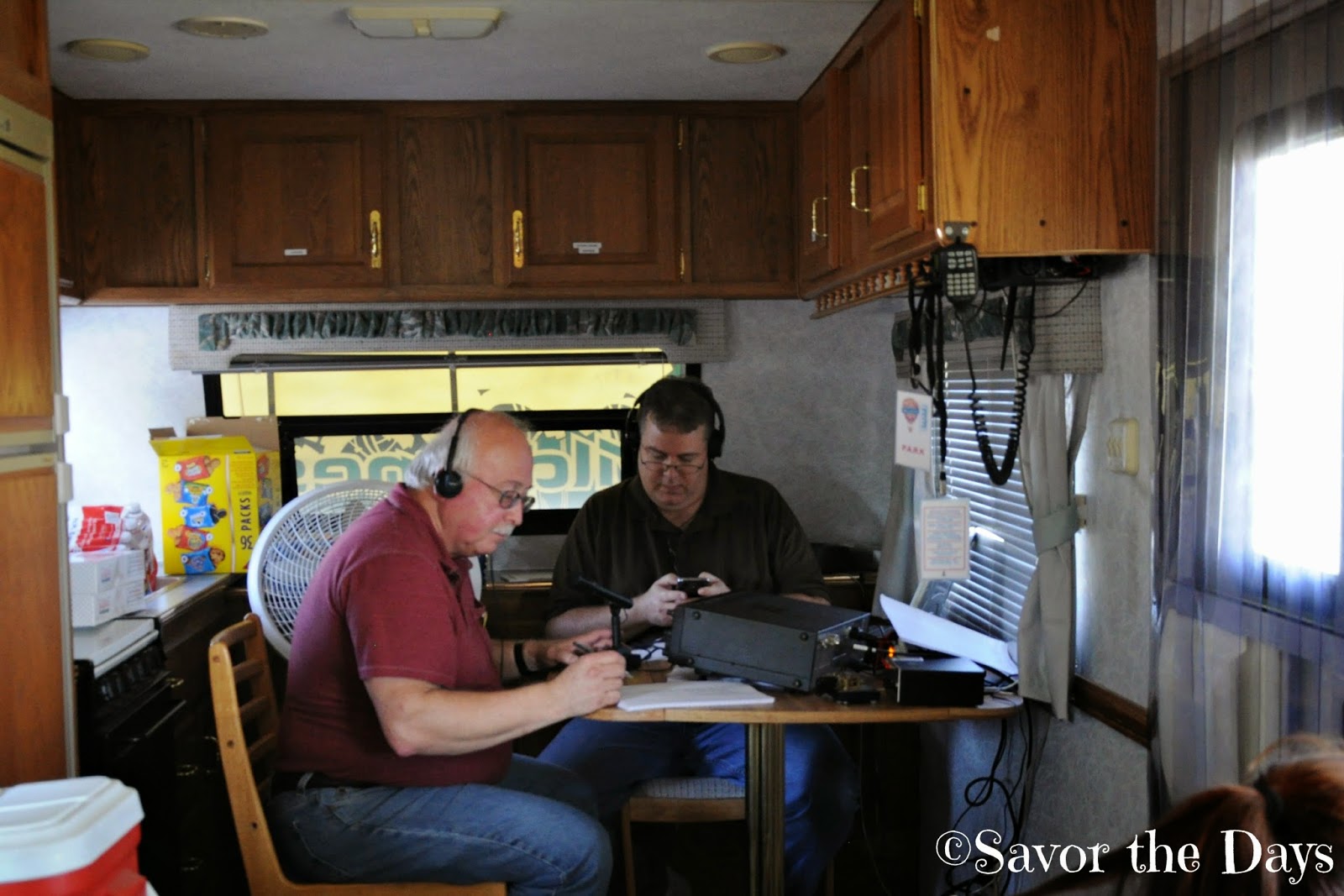 Anyone who makes contact with us during the event can receive a souvenir card from the event.  Stuart and I each got one of the cards to keep for ourselves. 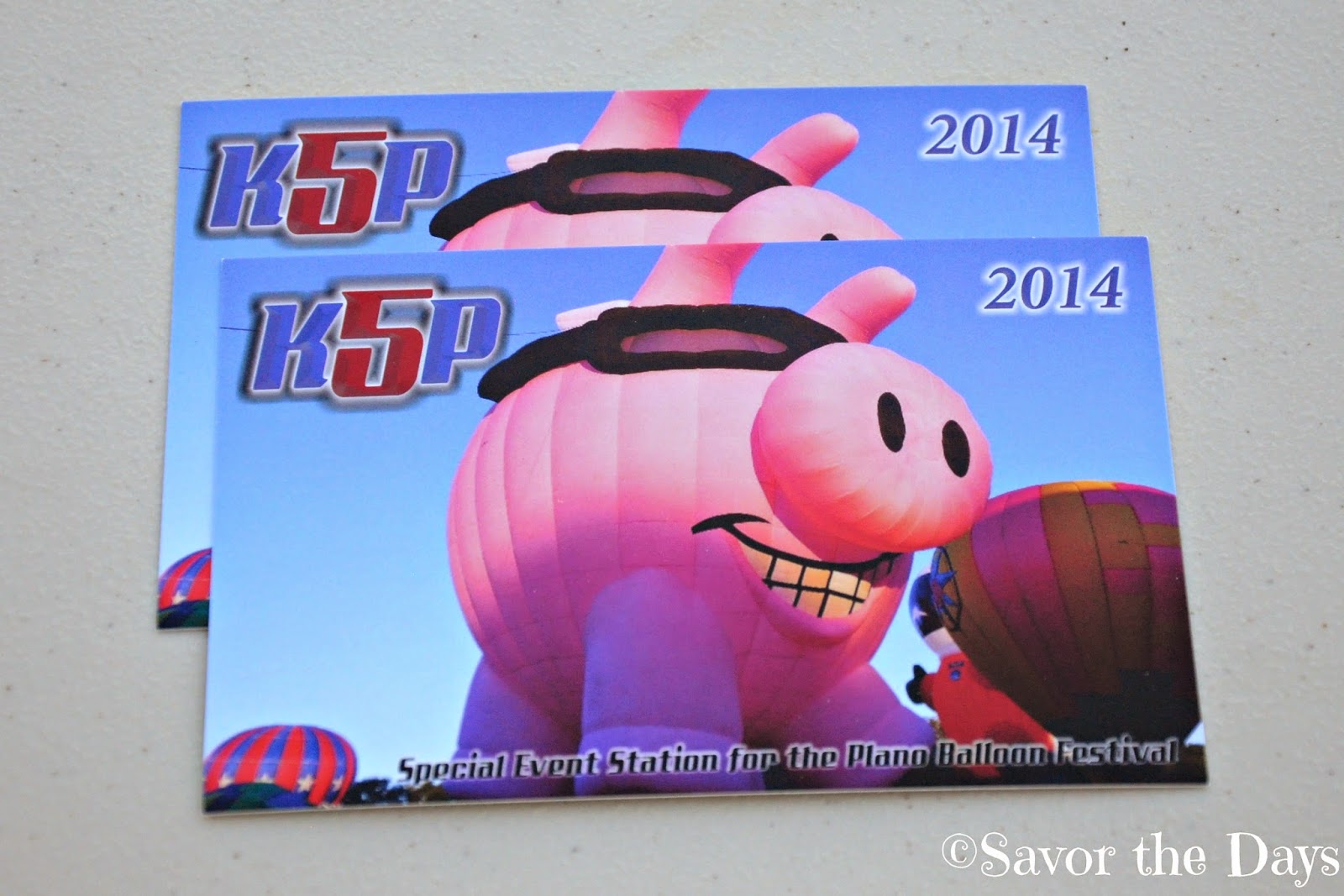 Here is the trailer we worked in.  It was set up and managed by the McKinney Amateur Radio Club.  We are not members of that club but simply volunteered to help them out at the event.  We do plan to join a local ham club but we would need to find one a little bit closer to our home. 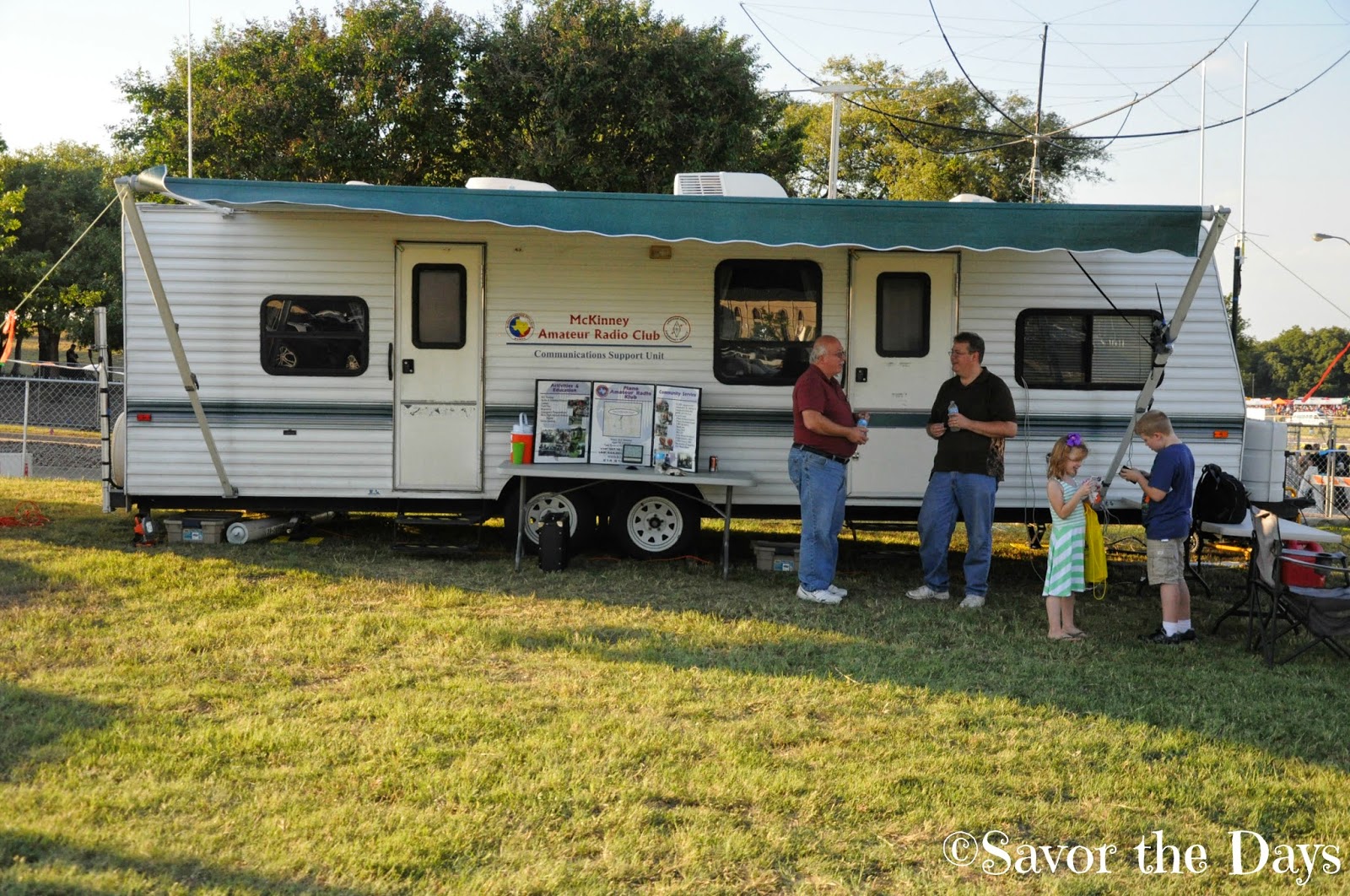 There were several antenna set up outside the trailer.  I'm still learning about these different arrangements. 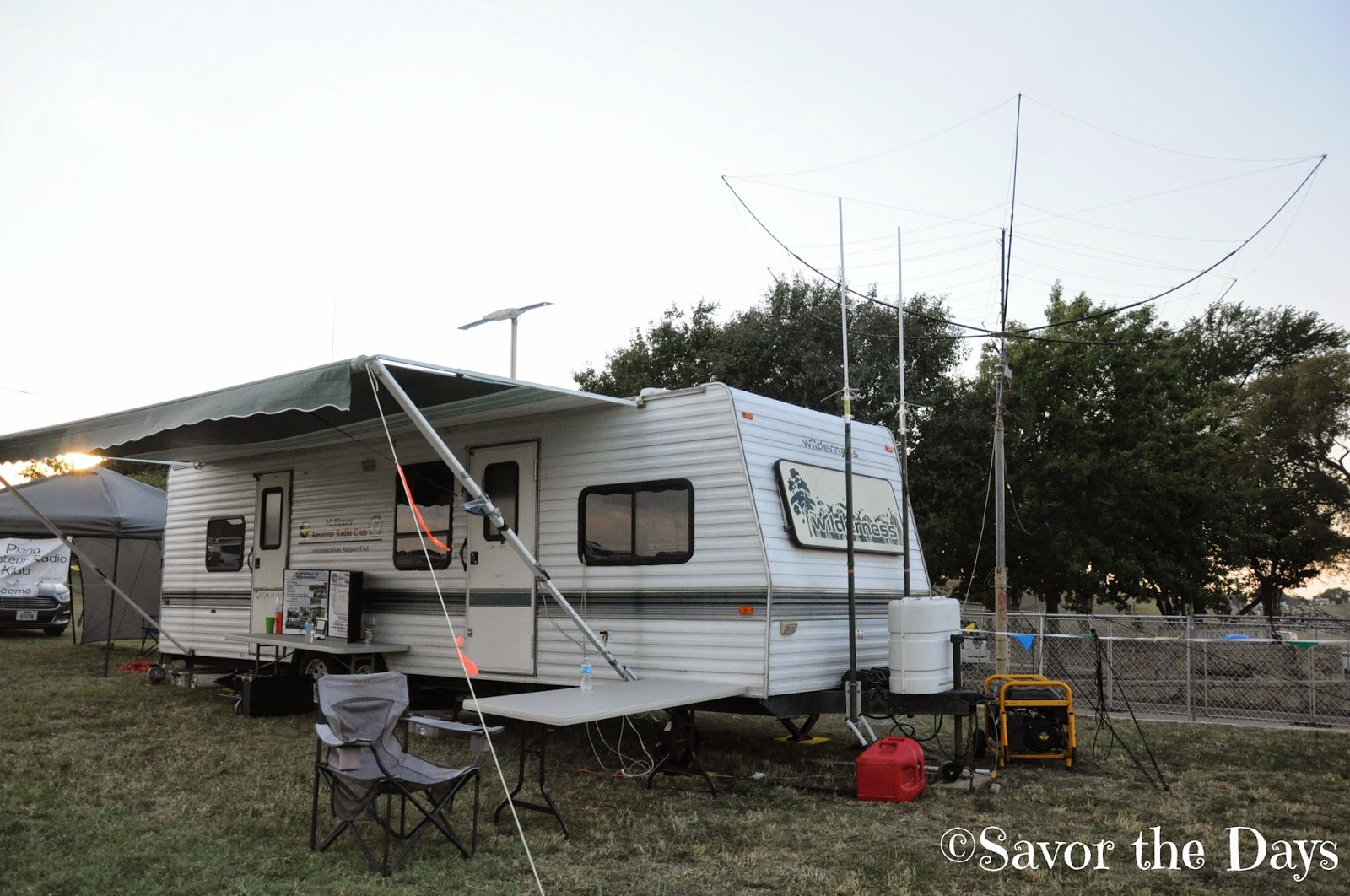 This big antenna looks quite serious though! 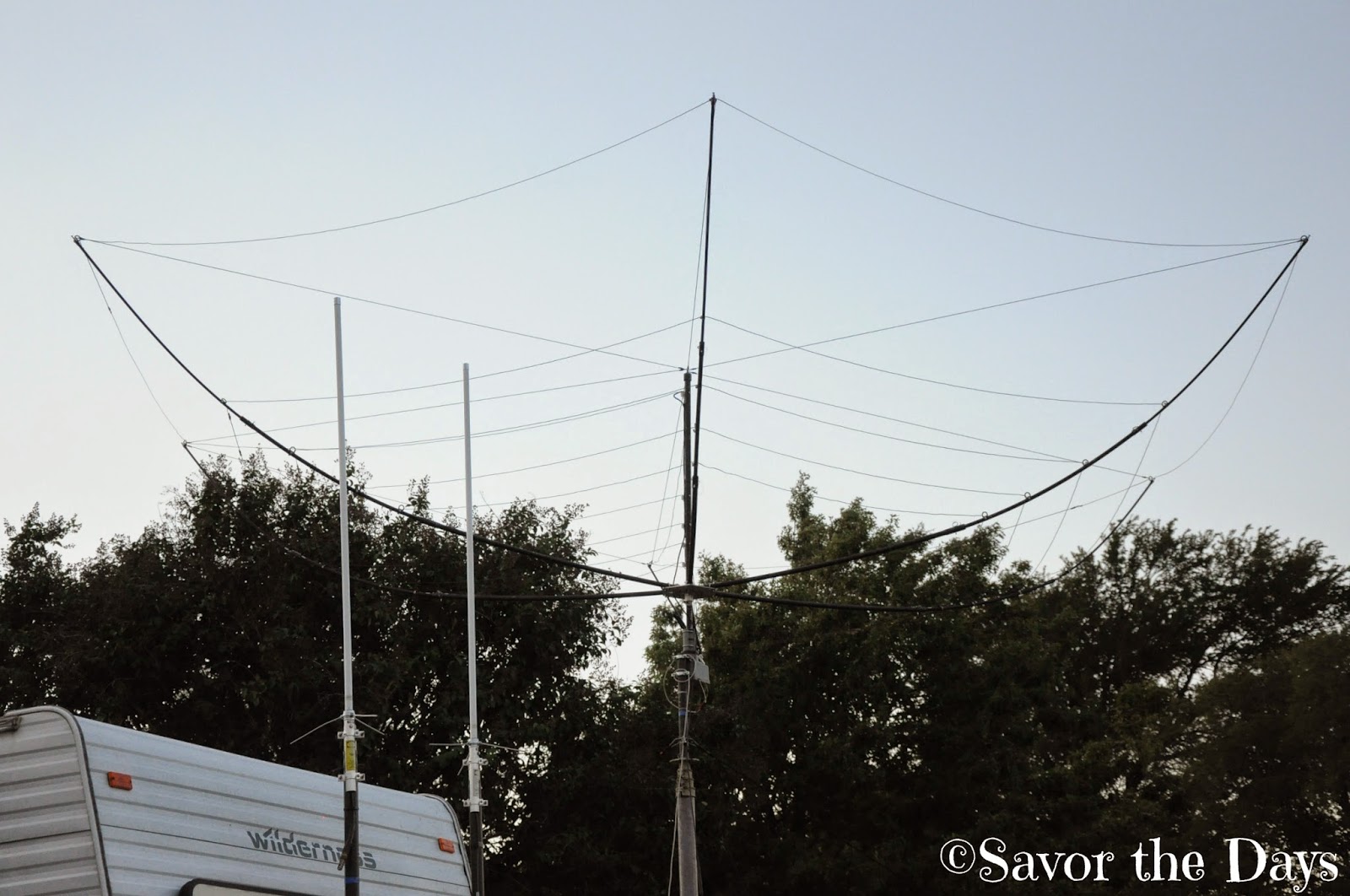 While we chatted with the ham club, the kids made some friends.  Rachel and this little girl loved that they had the same Hello Kitty thermos :) 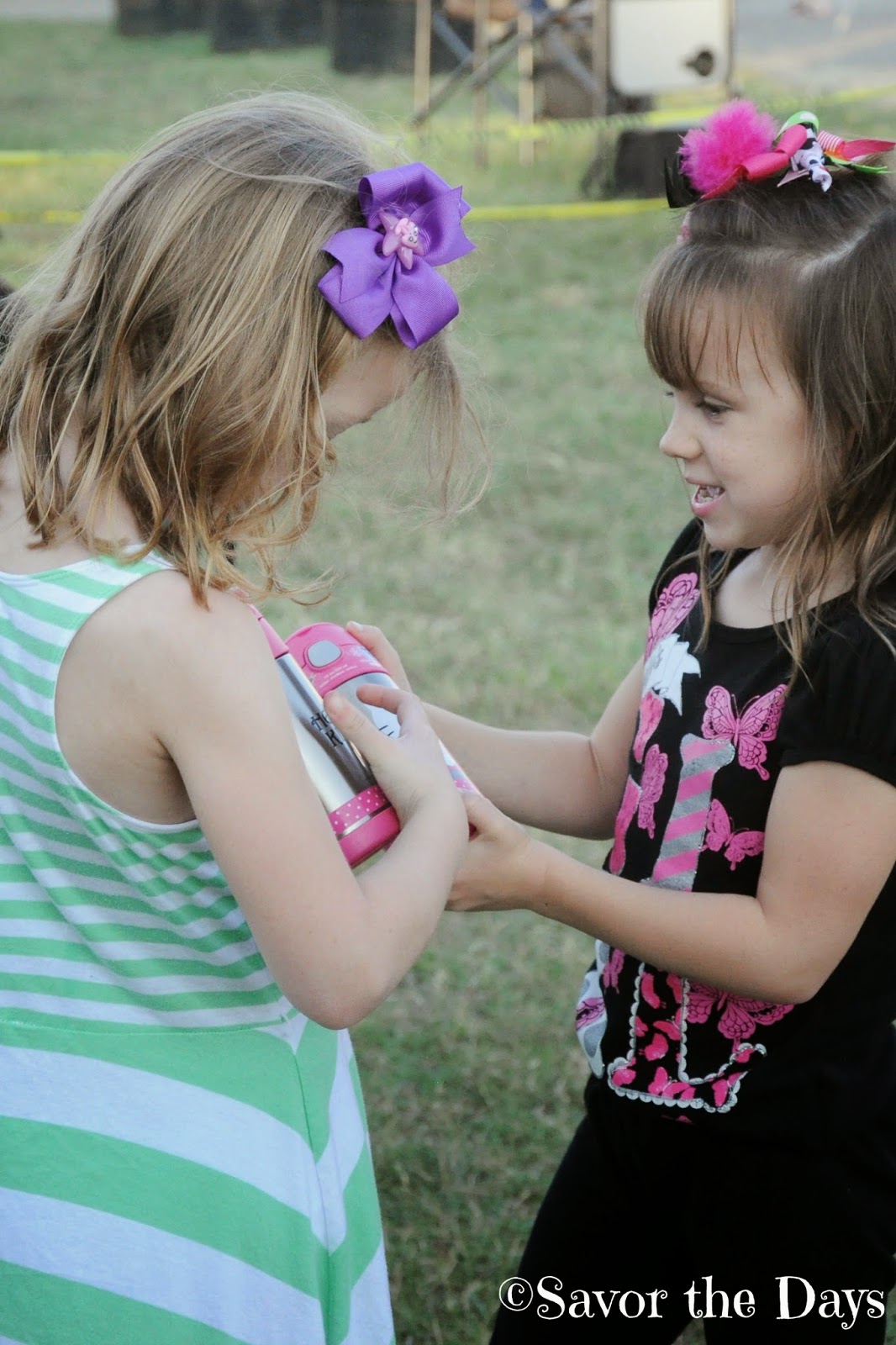 Nicholas helped the little girl's brother pass out small New Testament Bibles to anyone entering the festival that wanted one.  While he was standing around waiting to pass them out, he spend his time reading.  He loved that the Bibles were so small.  Nicholas and Rachel both got to keep one for themselves. 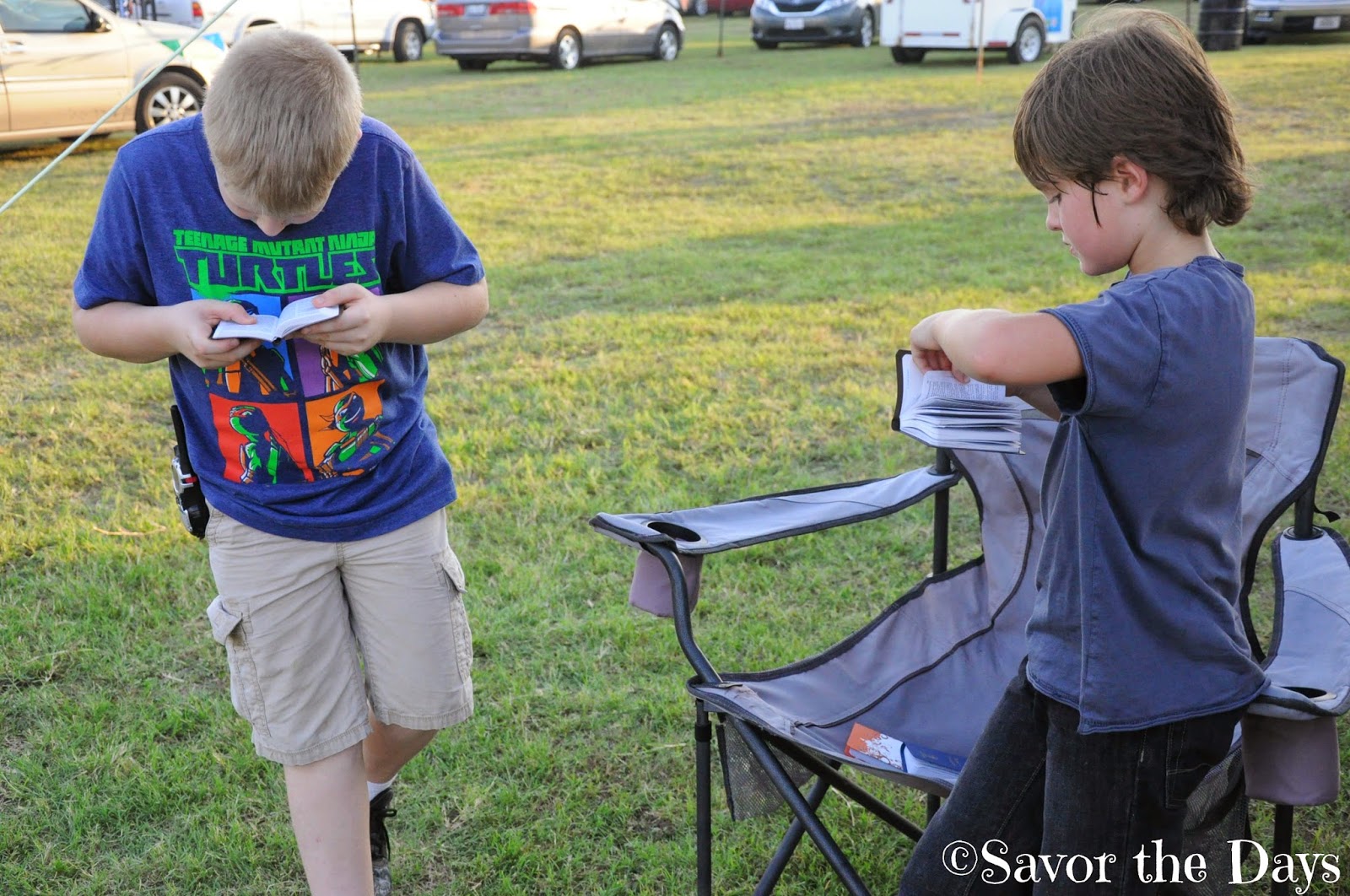 At the beginning of the festival, we got to watch one balloon set up and take off.  It was beautiful! 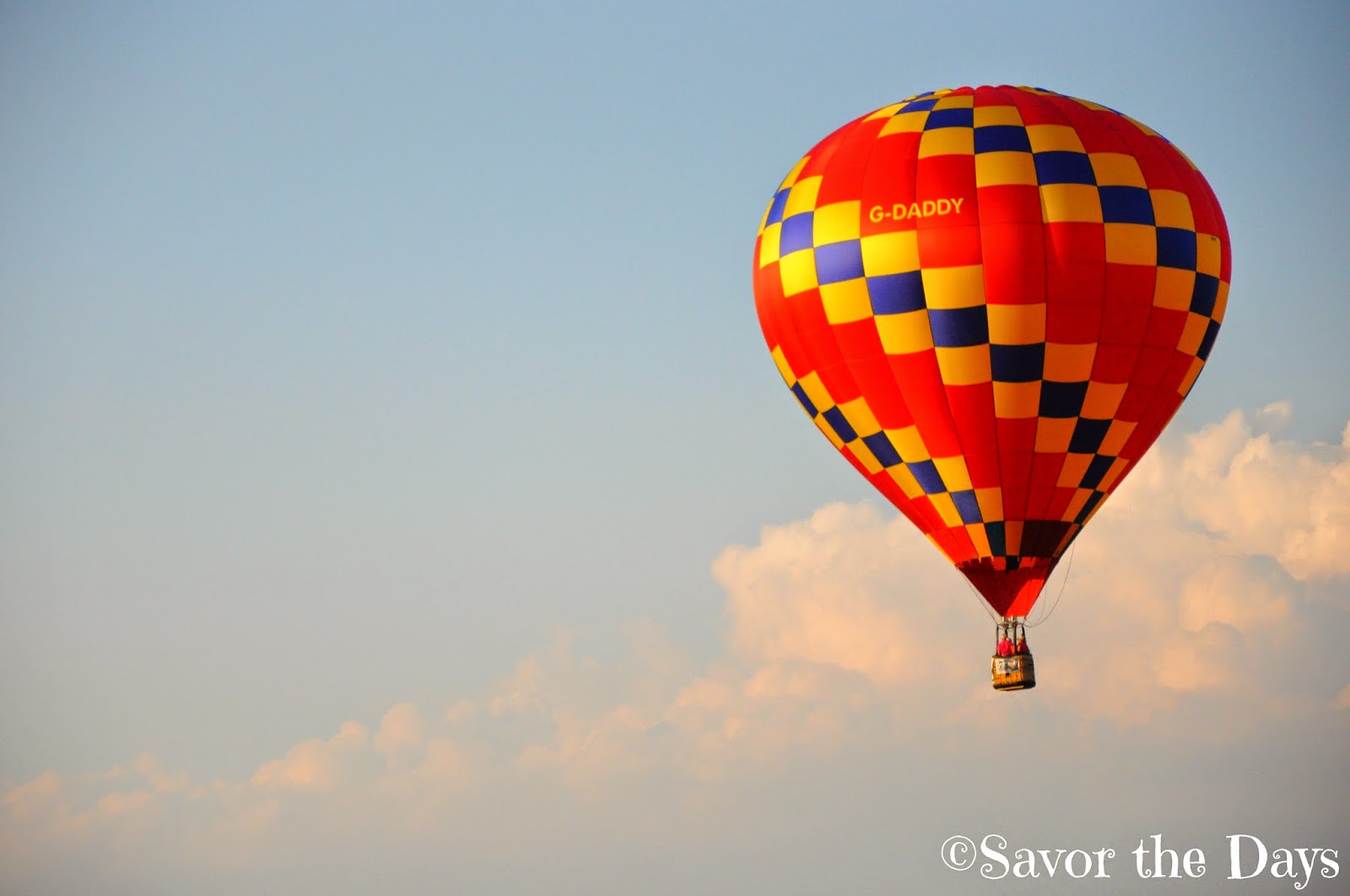 Unfortunately, the wind was picking up and the rest of the balloons decided to not take off.  Instead they went ahead and inflated and just stayed tethered to the ground.  Meanwhile, we walked around and visited with the dinner vendor and snack booths and had a great time. 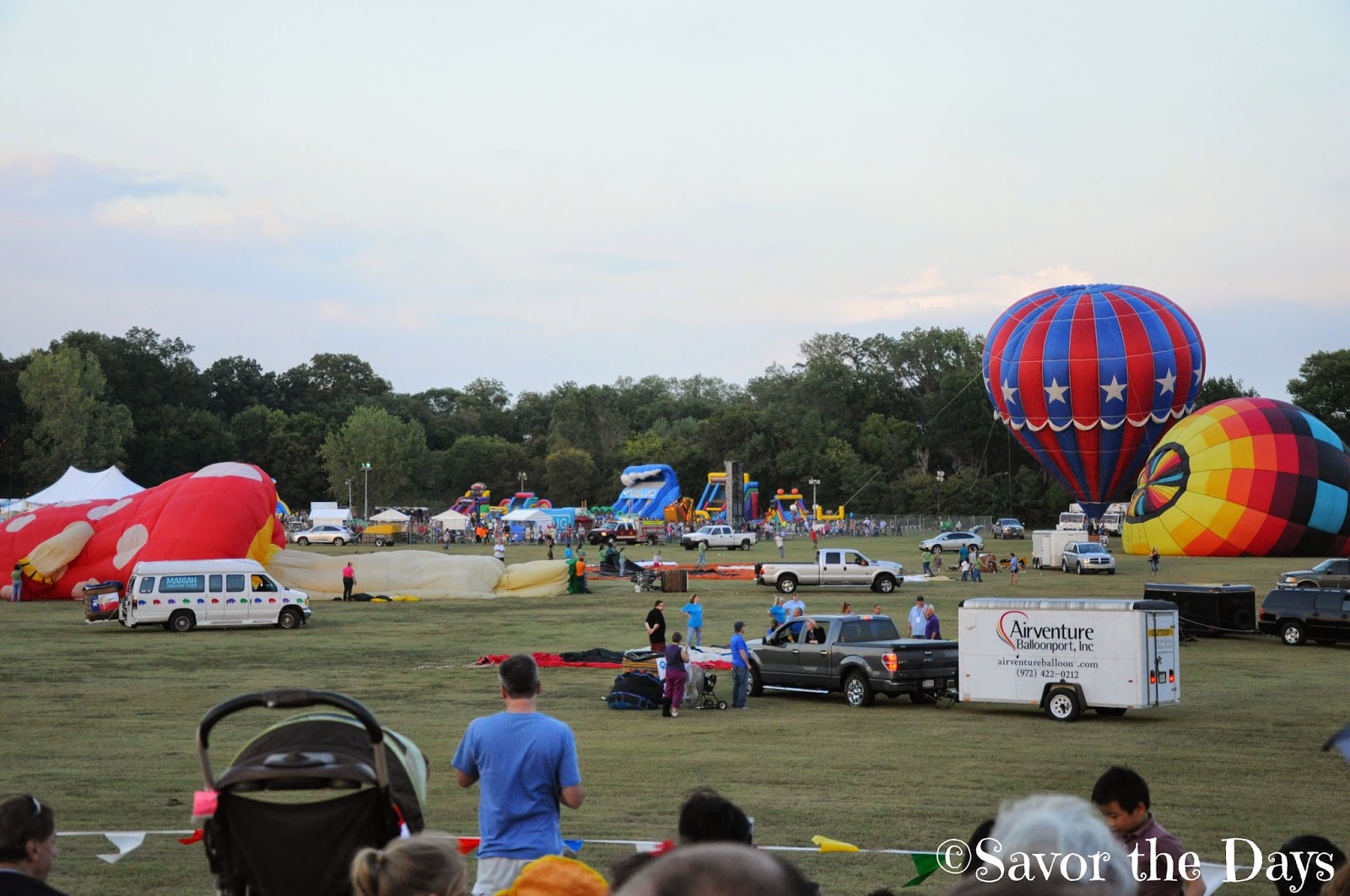 Once it got dark, the balloon glows were amazing!  We haven't been to a balloon festival in many years so it was a real treat for all of us. 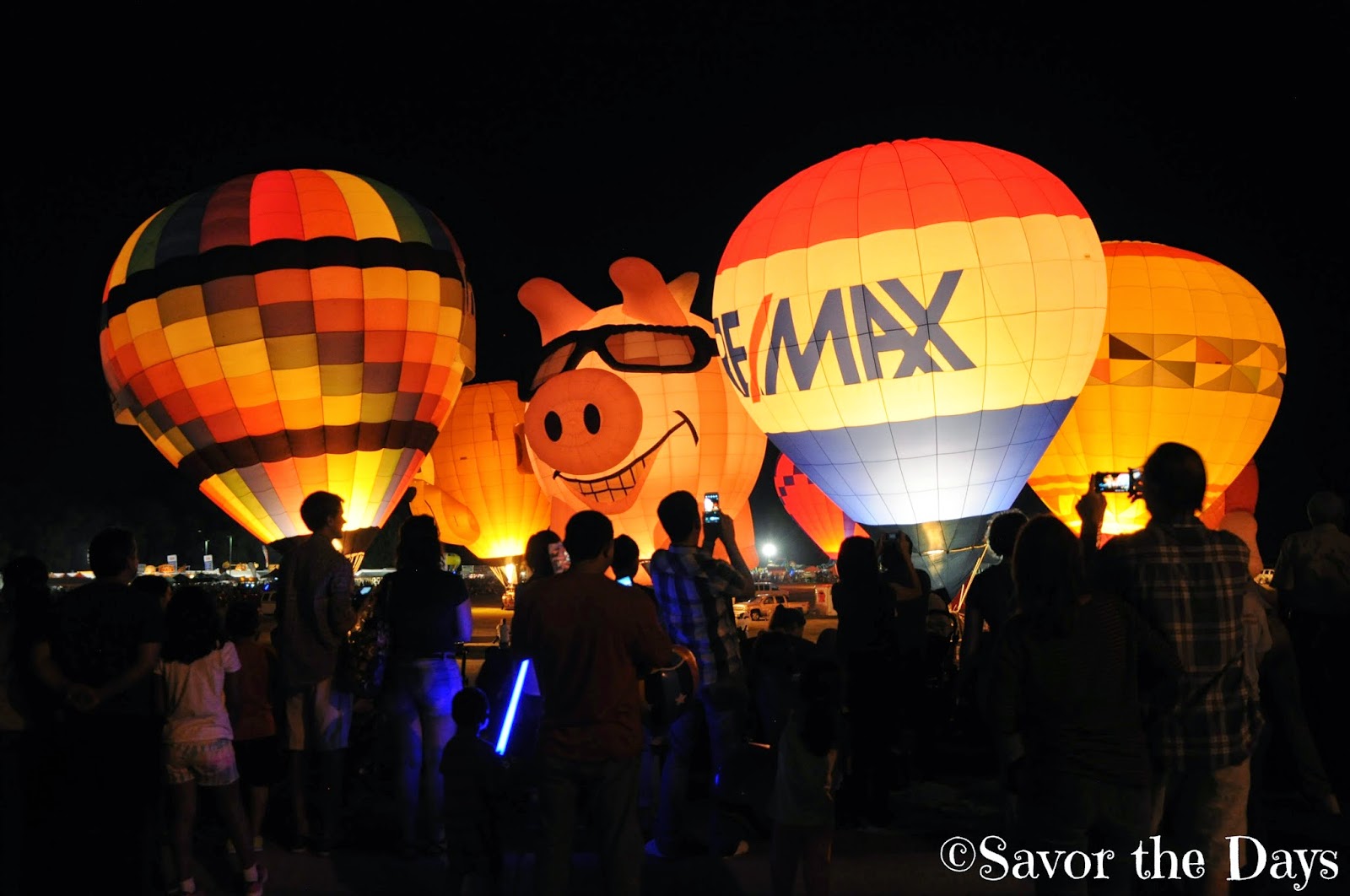 It was especially a treat getting to do a little ham radio work with the McKinney radio club before the event!
at September 19, 2014
Email ThisBlogThis!Share to TwitterShare to FacebookShare to Pinterest
Labels: Bucket List, family, field trip, Nicholas, Rachel, Stuart