We have studied surface tension which is kind of like an invisible skin on the water's surface. When I was planning the lessons, I got excited about building water molecules out of Tinker Toys to demonstrate Hydrogen bonding and a detailed explanation of how surface tension works. However, we haven't done anything with the periodic table or molecules or bonding. As I tried to create a lesson plan, I realized that there would be a whole unit of study that I would need to cover to really make hydrogen bonding make sense.

But as I was sitting on the playroom floor surrounded by Tinker Toys and nearing a meltdown, my dear husband, the voice of reason, reminded me that the boy is only in 2nd grade!

I get so excited about teaching him about the world around him that I easily get stuck thinking that I need to cover everything about each subject right now. But he's got years and years to get all the details. At this age, I just need introduce the concept of surface tension with some brief explanations and lots of demonstrations.

So that's what we've done.

We talked about surface tensions briefly and drew some pictures. Water molecules like to hold on to each other and they stick to each other in every direction. But the water on the surface only has water holding it from below so the pull down is stronger than the pull upwards. This makes them more tightly bonded to each other right at the surface which creates that harder to break "skin". And of course, soap breaks this bond by making the water want to stick to it instead of each other. Simple explanation but perfect for a 2nd grader.

This video talks briefly about surface tension but it is really just cool because it shows water droplets at 5000 frames per second!

Then we did lots of demonstrations of what surface tension looks like.

We got a small squirt bottle and filled it with water. Nicholas slowly squirted a few drops of water on the top of a penny. 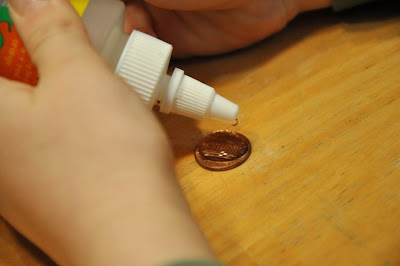 His hypothesis was that a little bit of water would go on the penny but most of it would just end up on the table. He was amazed to see that the water held itself together and formed a small dome of water. 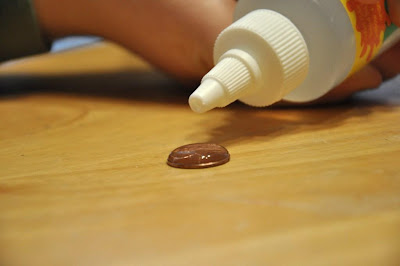 Rachel did the experiment too although she just liked keeping her finger on the penny so the surface tension couldn't form. Why is three such a defiant age? 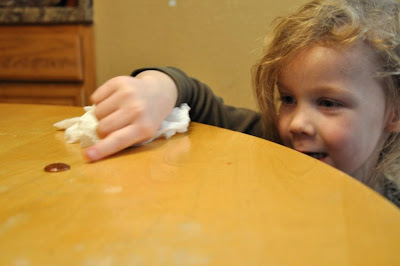 Next Nicholas the cowboy drew an outline for a paper boat. He drew several before he made one that he liked. 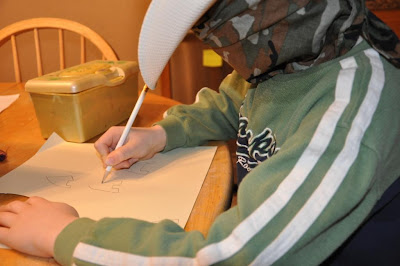 He decided on this larger boat and it really worked well. 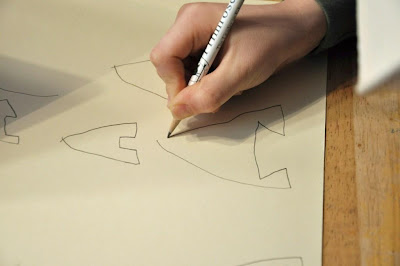 Take a look at this video and see what happened when they added drops of liquid soap behind the boat. I'll give you a hint...ZOOM!!!

We cleaned out the plastic tub and put in fresh water. Then we dirtied it up by covering the top of the surface with pepper. 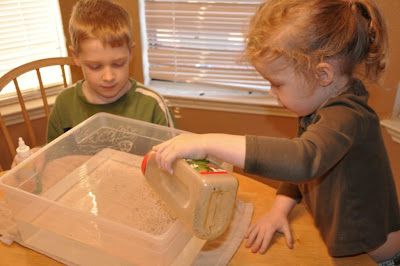 It was enough to make you sneeze! 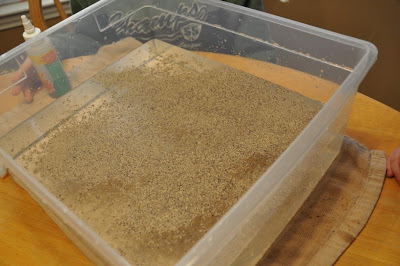 Take a look at this video to see what happened next...

Here's another experiment we love. Nicholas has done the exploding milk experiment in the past and asked to do it again since some of the previous surface tension experiments reminded him of it. However, this one isn't really a demonstration of surface tension. There is a different thing happening here with fat molecules and soap but it's still a fun experiment.

You need a pan, whole milk, squirt bottle with liquid soap, and some food coloring. The silly boy is optional. 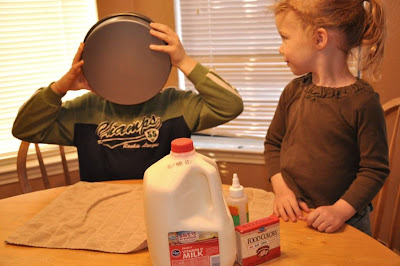 Pour the milk in the pan and add a few drops of food coloring to the center. Then watch what happens when a little soap is added...

This experiment is so cool that we did it several times. Here was our best exploded milk picture. 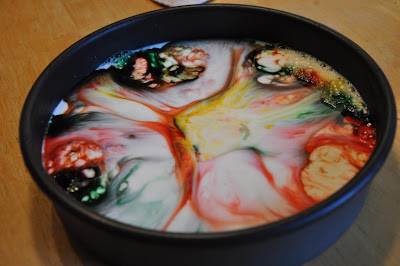 My kids are mad scientists and love to mix things up. Check out the fun they have with the leftover milk.

And still other things were added to the milk such as pepper and ketchup! 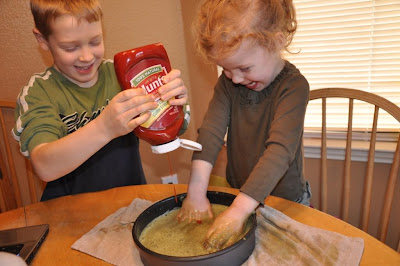 I love to watch them have so much fun as they explore the different sights and textures of their creations.
at March 10, 2012
Email ThisBlogThis!Share to TwitterShare to FacebookShare to Pinterest
Labels: fun with food, homeschool, Konos, Nicholas, Rachel, science experiment