February 20, 2015
It's opening night for Beauty and the Beast Jr. at the Actors Conservatory Theatre!
I had to put Rachel's hair up into a ballet bun.  I'm pretty sure a true ballet instructor would frown on my sad attempt but Rachel thinks its cute. 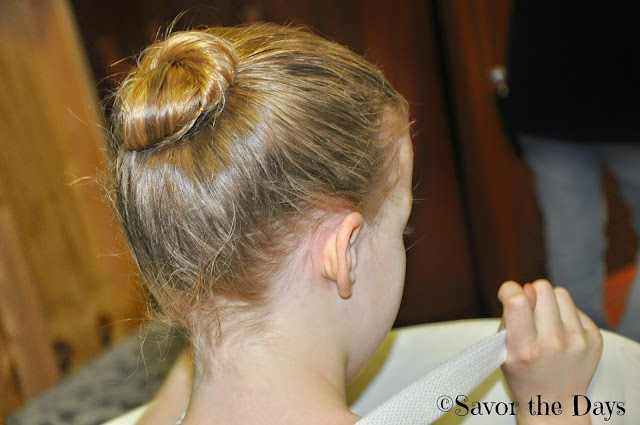 This is the first night she has had to go in the makeup line at the theatre.  She was a bit nervous but she made sure she was in line where our sweet neighbor was doing makeup. 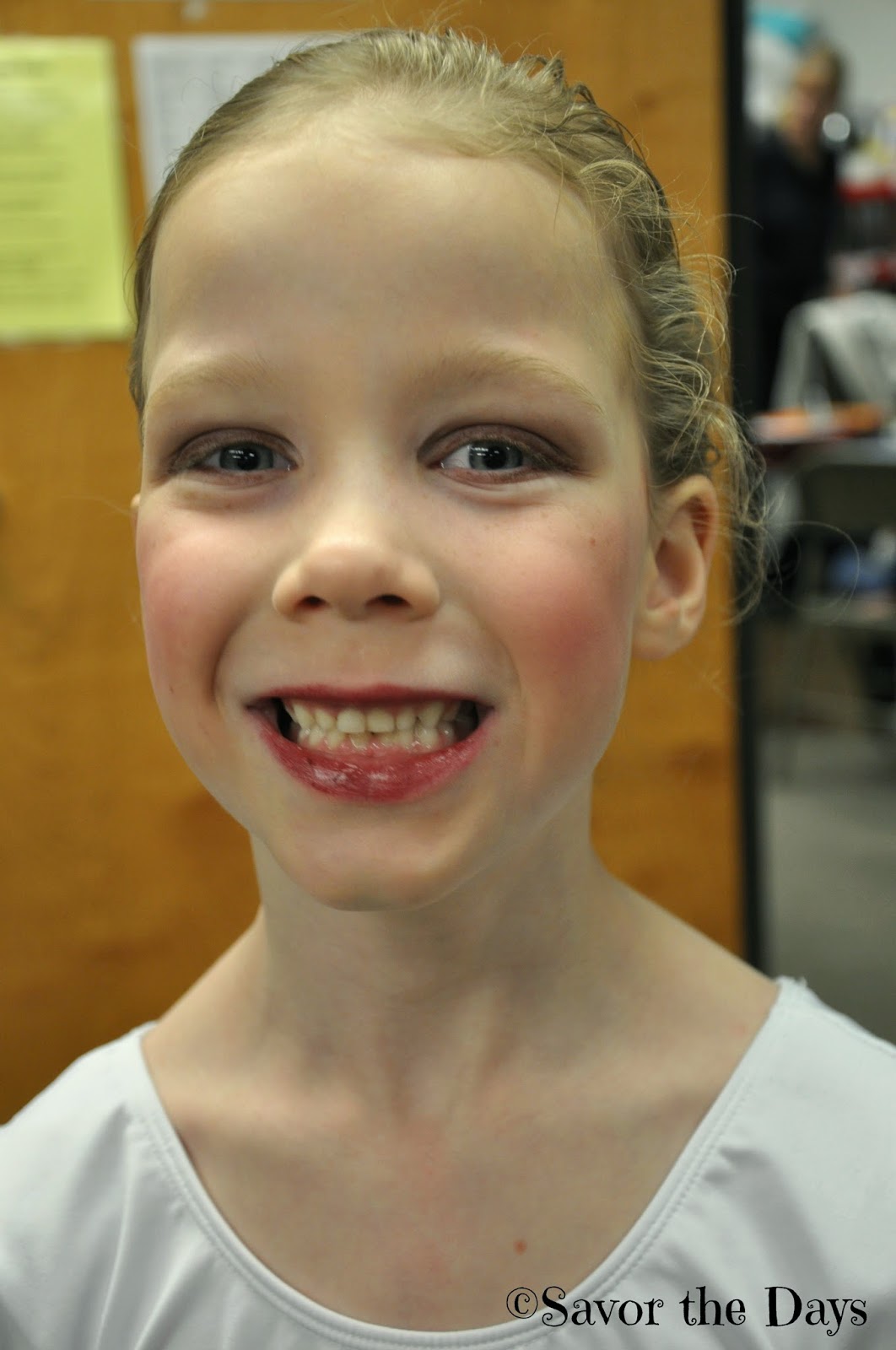 Rachel ran over to a mirror to take a look at herself.  She tried to look her eye shadow but couldn't figure out how to see her eyelids!  She's so cute! 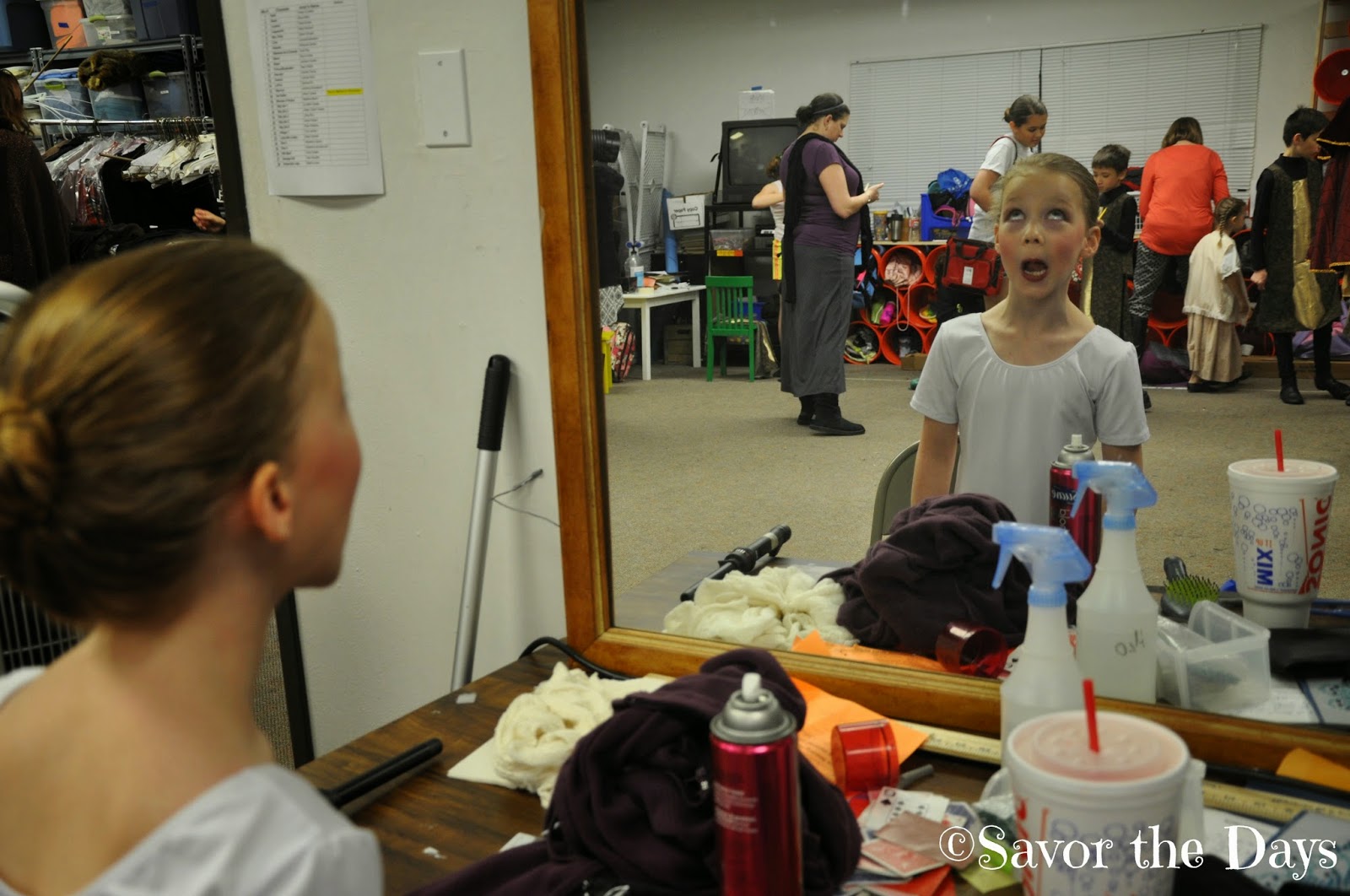 Here's our little tea cup in her costume.  I am so impressed with how the costumes turned out.  They are just plastic planters with the bottoms cut out, straps added, a little paint, and a gold duct tape wrapped piece of foam added for a handle.  There are some amazingly creative people in the theatre! 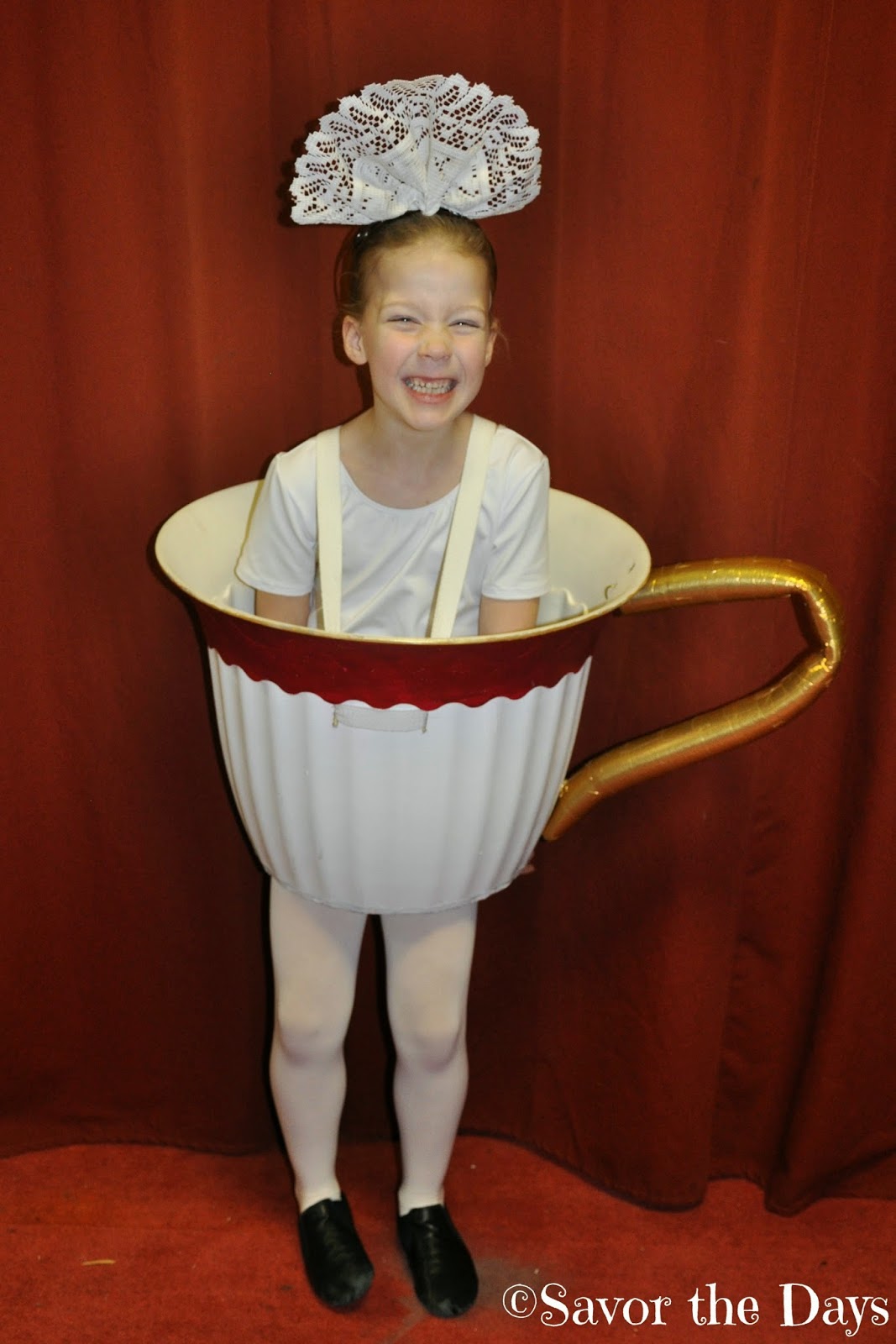 Rachel sat down in the Beast's chair that was back stage.  She giggled and said sneakily, "I'm sitting in my master's chair. Hee hee hee!" 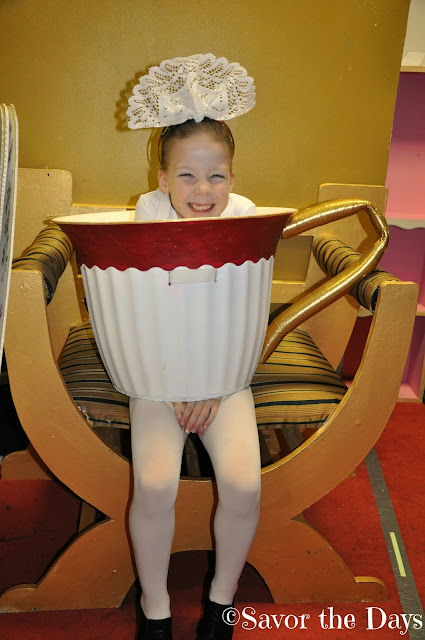 Nicholas is an enchanted knife.  The flatware headpieces were quite a feat to create. It was hard finding just the right way to keep the headpiece stable on their head AND comfortable for them to wear.  There were multiple things tried but eventually they turned out great!

All of the knives are boys so some of the parents were a little concerned that the boys might try to have a sword fight while wearing their headpieces....because that just seems like the natural response when two boys are wearing giant foam knives on their heads.  But so far they have maintained their composure quite well and I'm happy to say that all of the knife headpieces are still in one piece.
Each knife has a corresponding spoon and fork to make a complete utensil trio.  Nicholas has entertained us with his stories after each rehearsal about how "annoying" his spoon and fork are.  They mess with him and poke him and act silly around him.  He thinks they are annoying but they all seem to smile while they are messing with each other.  It's cute :) 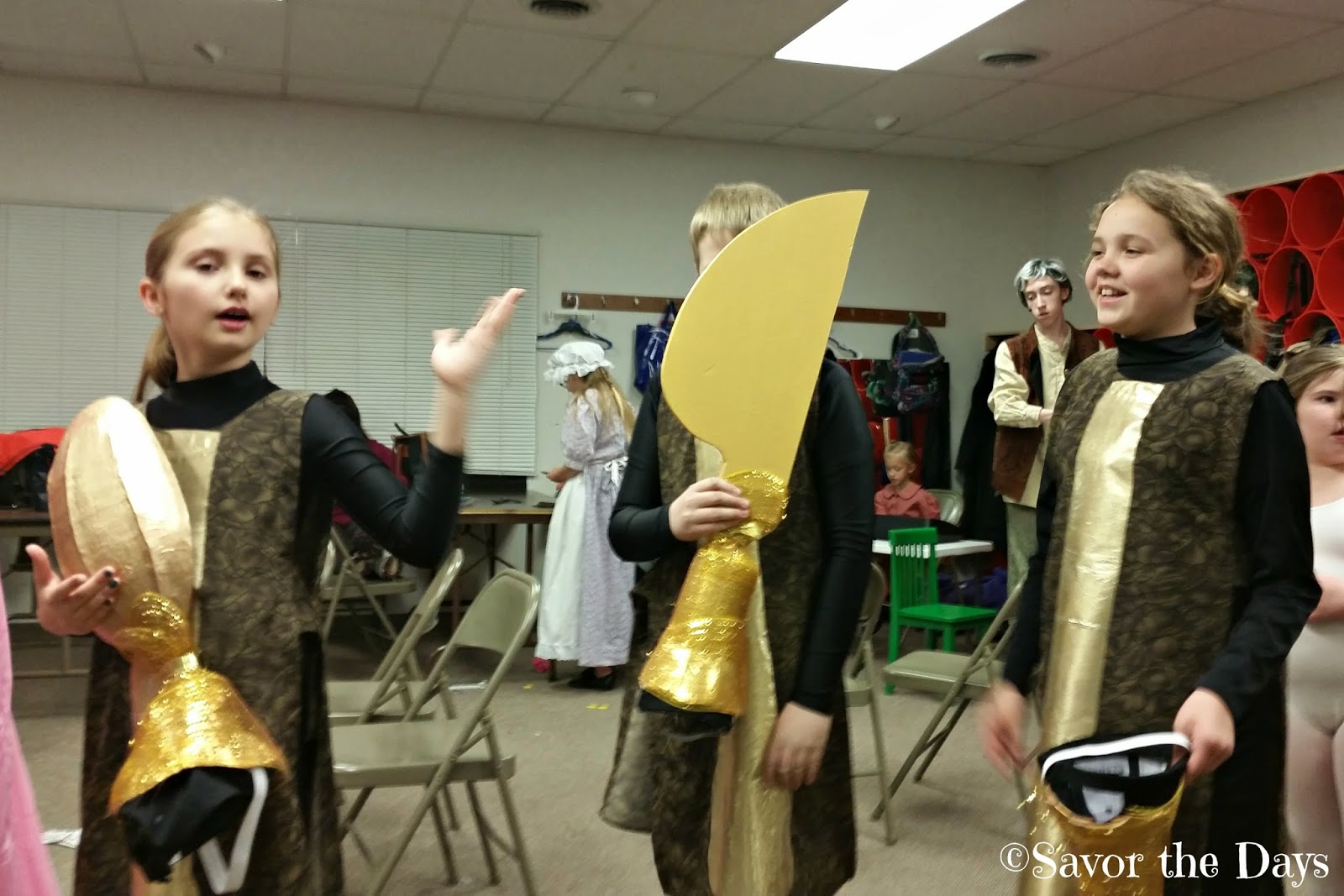 Before going on stage, the cast does a few warm ups for their vocal chords as well as their bodies then they all say the Actors Prayer.  I love this part!
The Actors Prayer
There's magic in the theatre and the theatre is magic.
God bless those who create that magic.
Your talent is your gift from God.
The way you use that talent is your gift back to Him.
Amen.
After opening night, we often go out to dinner.  We let the kids pick where to go and of course, they pick Joe's Crab Shack.  Yum!  Nicholas ordered an adult steampot full of crab and a whole lobster.  We were a little concerned that he wouldn't actually finish it all but then we realized that we could just enjoy munching on his leftovers after he went to bed.  Unfortunately, he finished it all except for the potatoes and corn.  He said, "After opening night, you have to feed the boy heartily!" 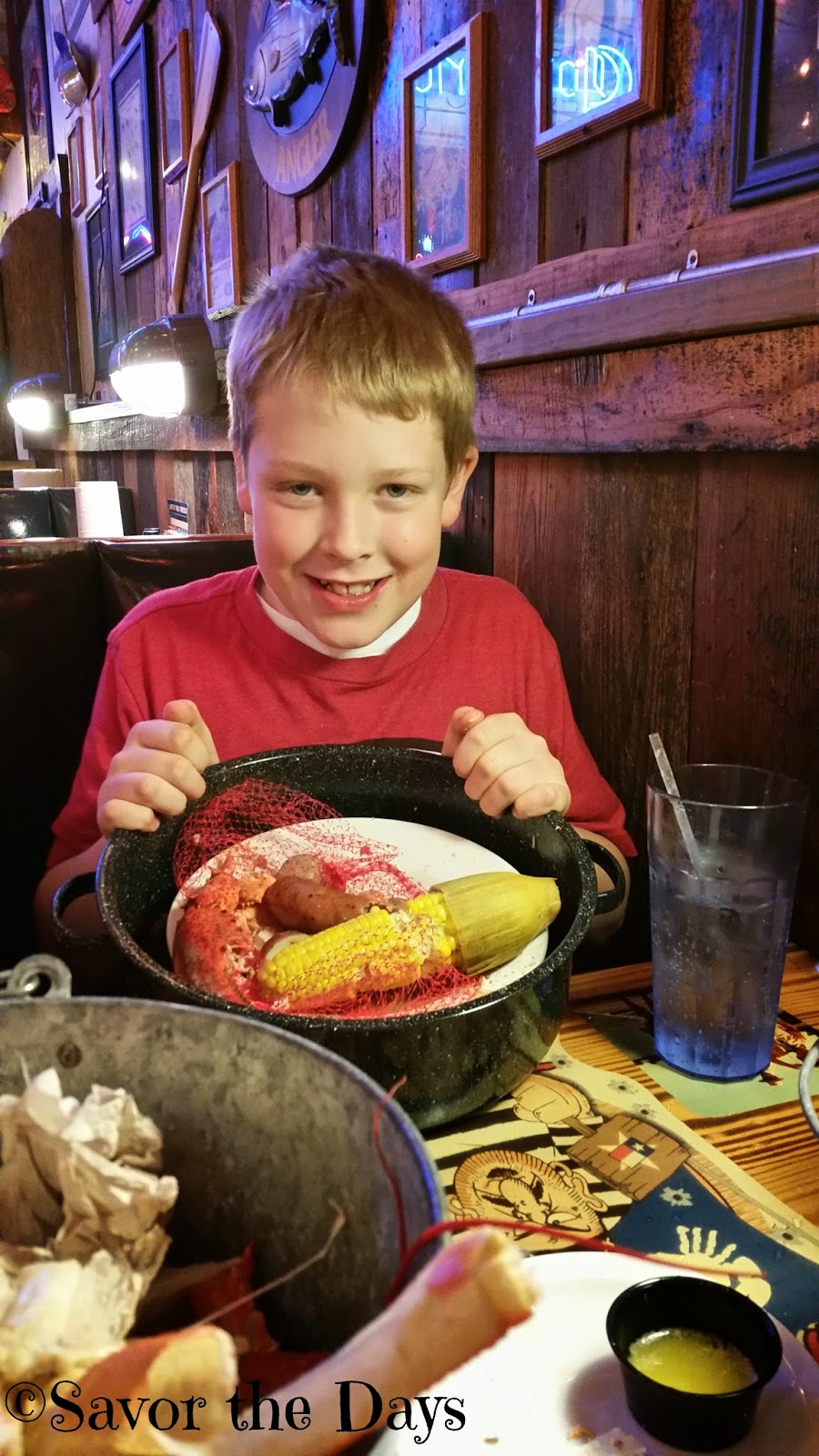 Rachel got a kid-sized crab steampot.  She dug out her own crab meat like a pro and finished every last bite.  Her favorite thing was the melted butter. 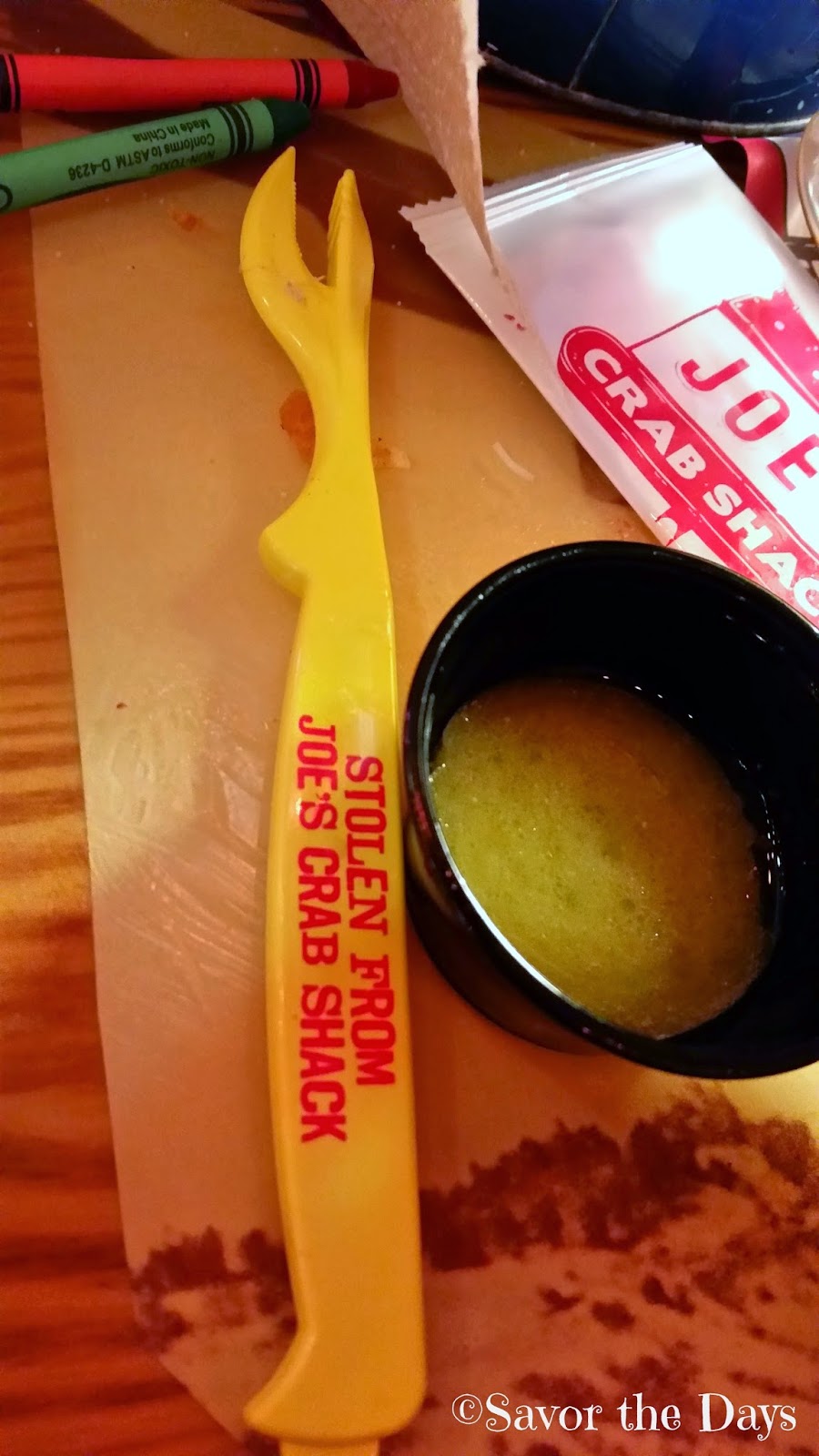 I caught her dunking her fingers in the melted butter just so she could lick them clean. 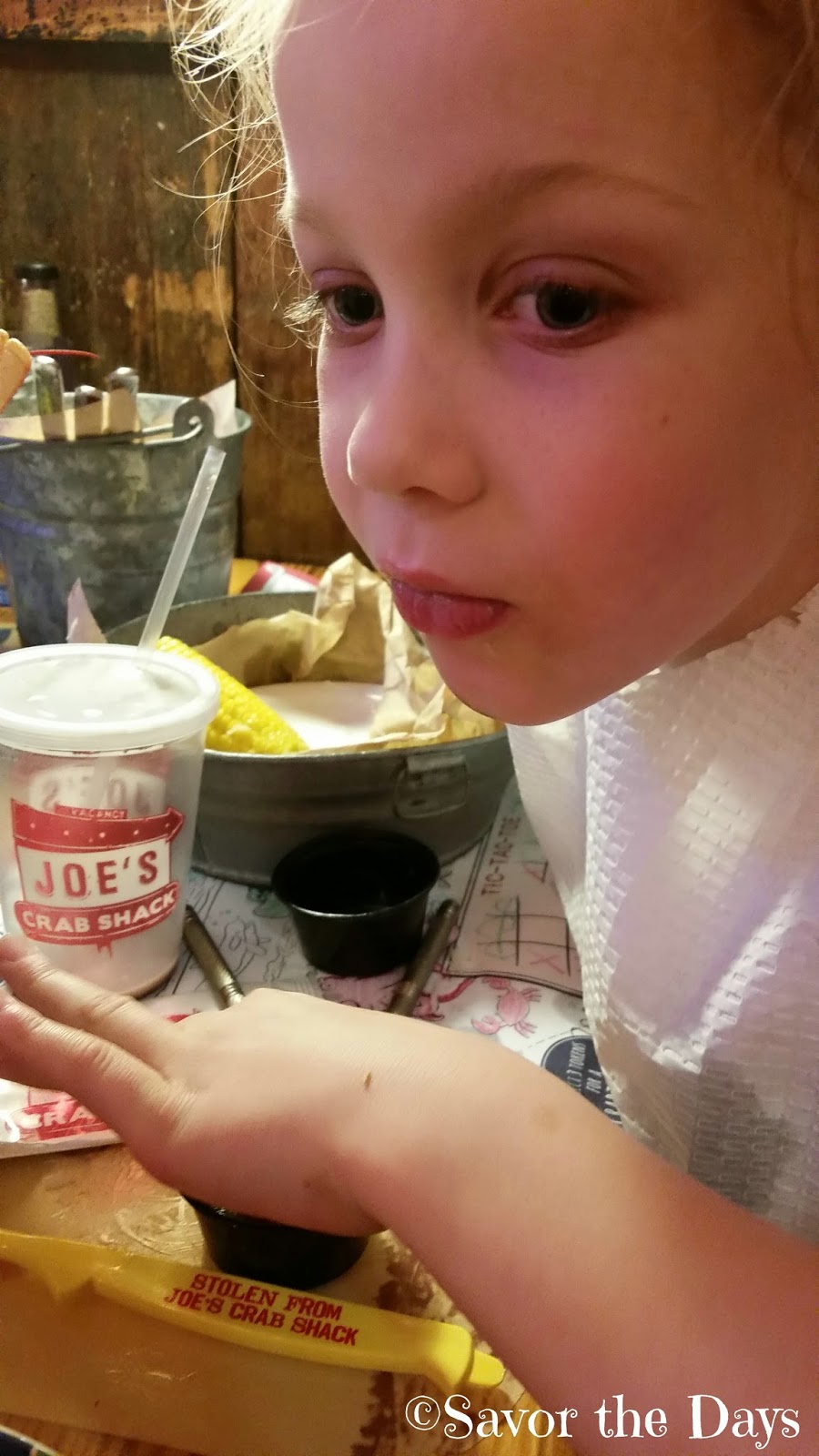 I told her to stop doing that.  And she did.

But then I caught her drinking the melted butter straight from the cup! 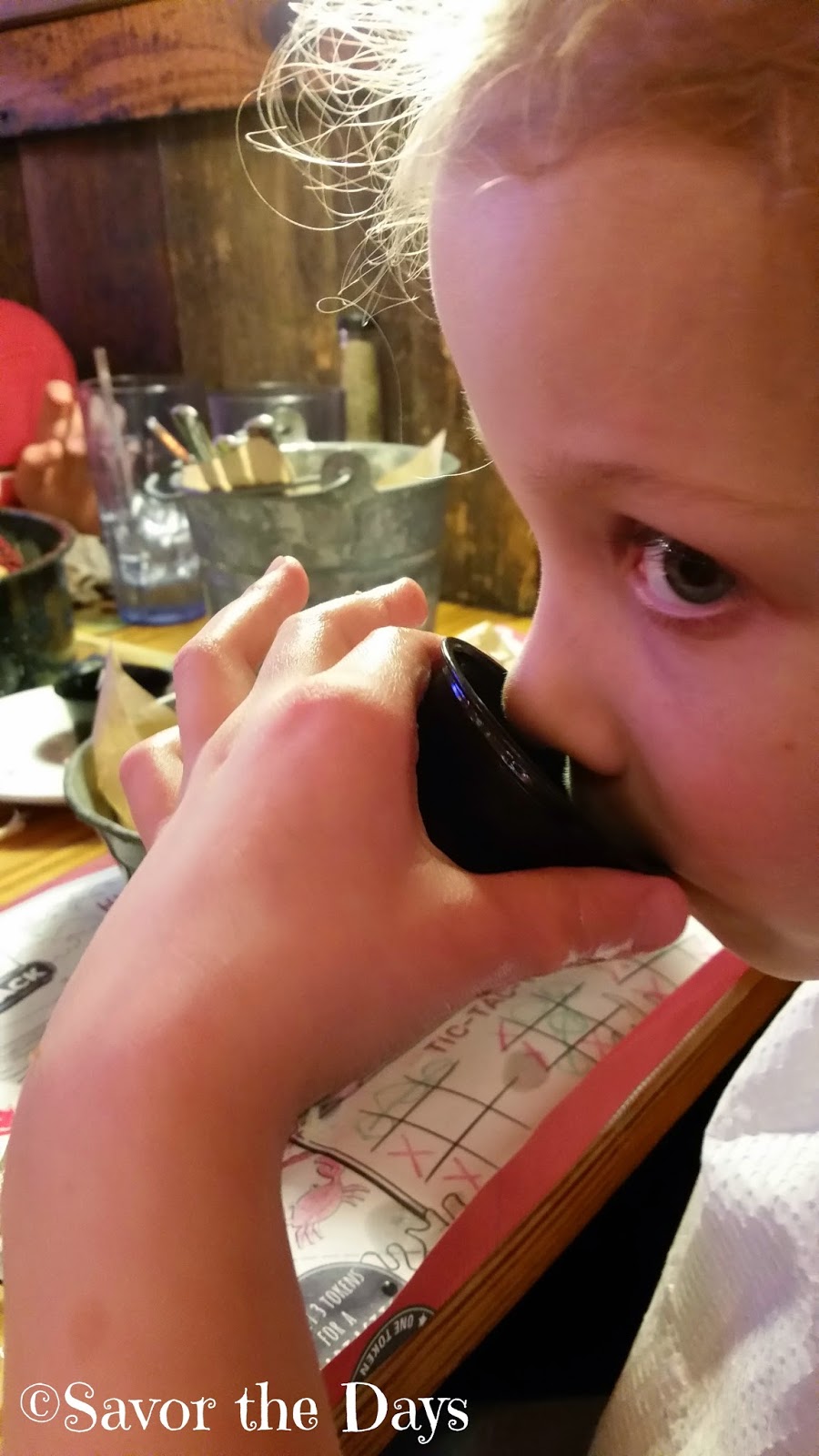