It is Halloween again and the kids had a lot of fun picking out their costumes this year.  I first pulled up a costume website and let them look through all that was out there so they could start thinking about what they wanted.  Rachel picked out an angel costume.   Then she picked out Strawberry Shortcake and said that would be her costume for next year.

Then she picked out a grand list of costumes that would last her for 7 upcoming Halloweens.  I tried to explain to her that what is a favorite costume now probably won't be a favorite costume next year and certainly not 7 years from now.  But she said she KNOWS she will still love the costumes on her list.  She promises!

Our trip to Party City was very easy since she knew exactly which costume she wanted. 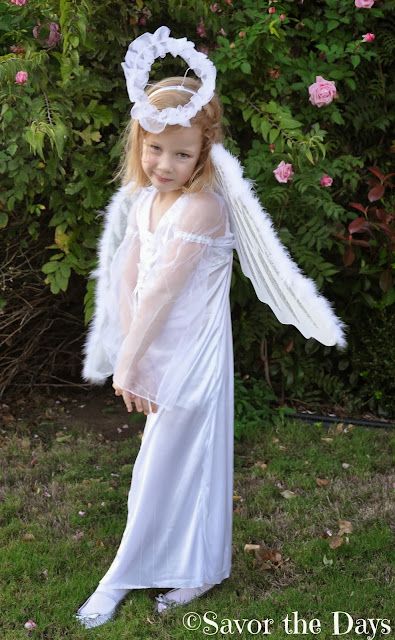 As usual, Nicholas wanted a scary costume.  He knows I won't approve those though so he quickly moved on.  He found a few that weren't too scary but then decided to go with the Ice Wolf Ninja costume.  I think he just wanted the Ninja blades. 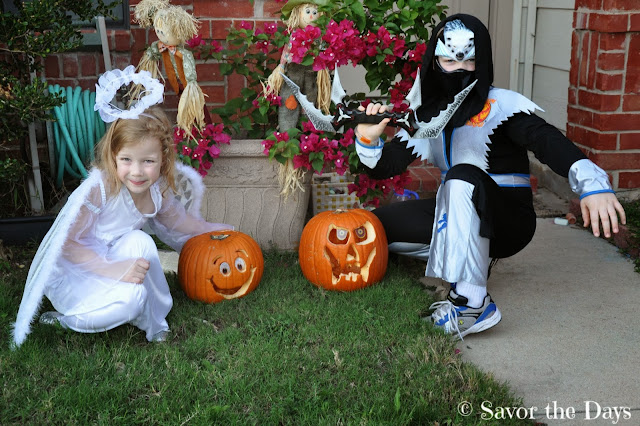 Rachel wanted to look like she was flying for this picture! 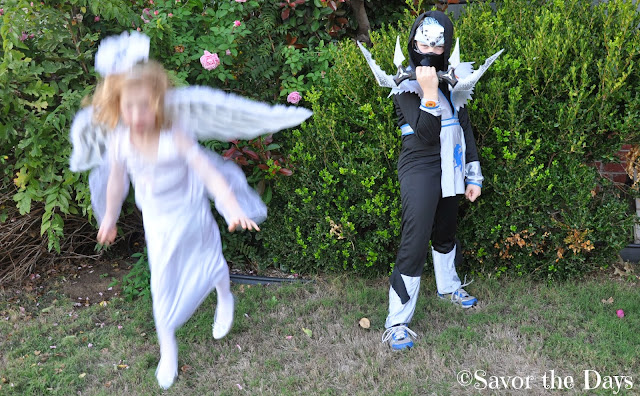 Stuart and I both go out with the kids as they trick-or-treat around the neighborhood so we aren't home to give out candy.  But as we were starting to head out, this cute little Darth Vader came to the door.  I had a few pieces of candy ready for just such an emergency.  Nicholas was really excited about getting to hand out candy.  Just think, in a few years he will be too old to go trick-or-treating and he will be stuck at home just handing out candy.  Oh, they grow up too quickly! 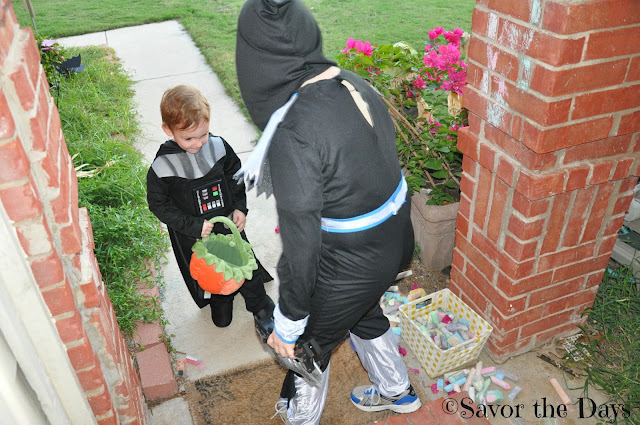 We met up with our neighbors and some other friends and traveled around together for the night.  Nicholas and the older boys stayed together and mostly ran a few houses ahead of the rest of us.  Some of the dads were able to keep up with them so they weren't alone.  Nicholas had a light up sword that came out of his bag once it got dark which was neat because we could at least how far ahead of us he was. 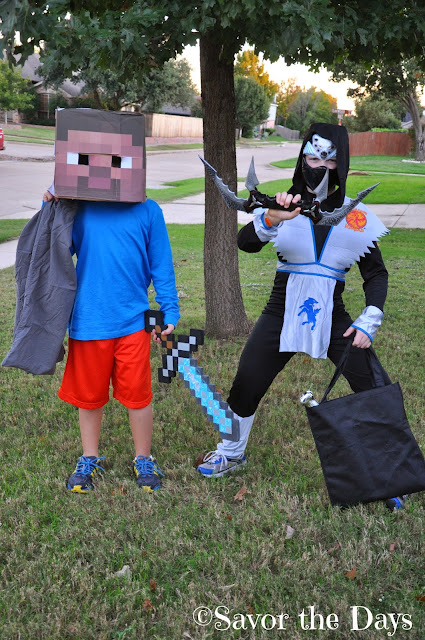 The girls were a little slower and we stayed with them. 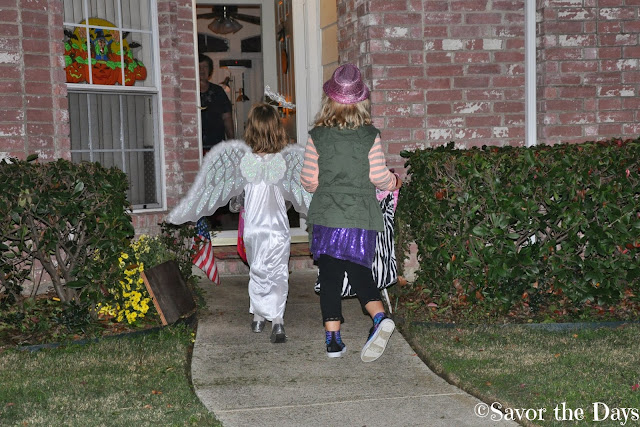 Rachel was just giddy with excitement each time she left a house with a little more candy in her bag. 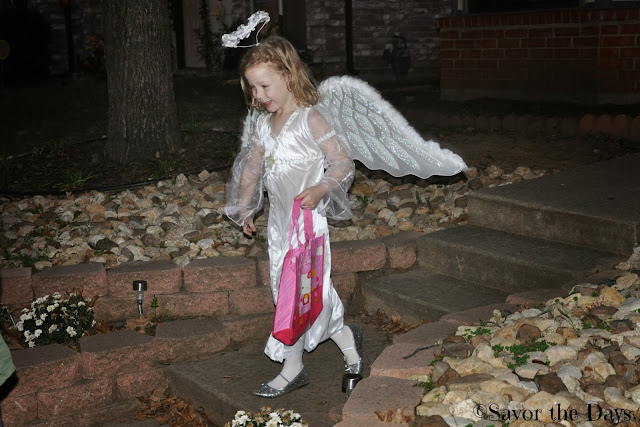 She really is such an angel! 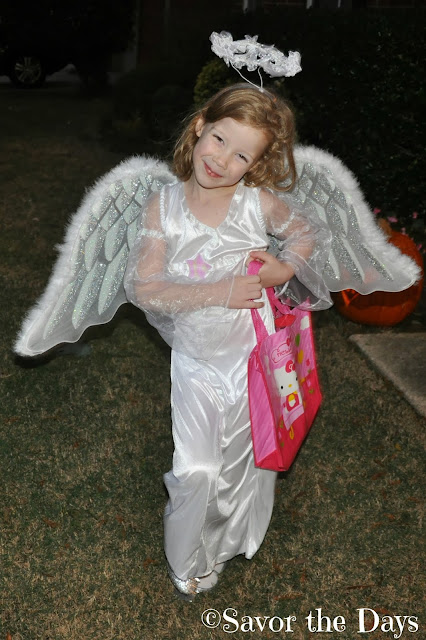 I love watching Stuart taking such good care of her.  He walked hand in hand with her letting her know when to watch her step (we have uneven sidewalks that are hard to see at night).  He also helped direct her to houses that had their porch lights on so she could be most efficient with her candy hunting.  Good memories! 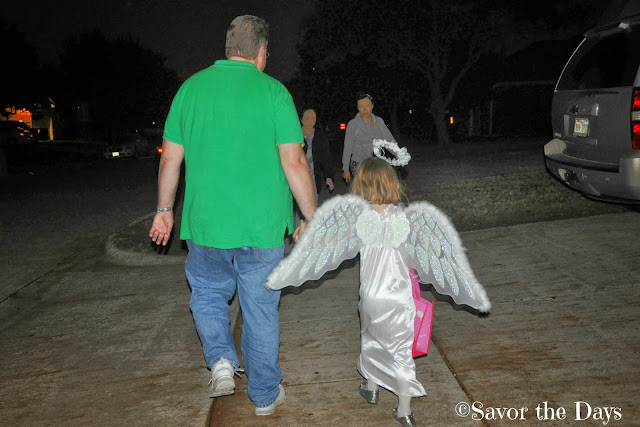 Our hard little workers were excited to finally get home and examine their bounties. 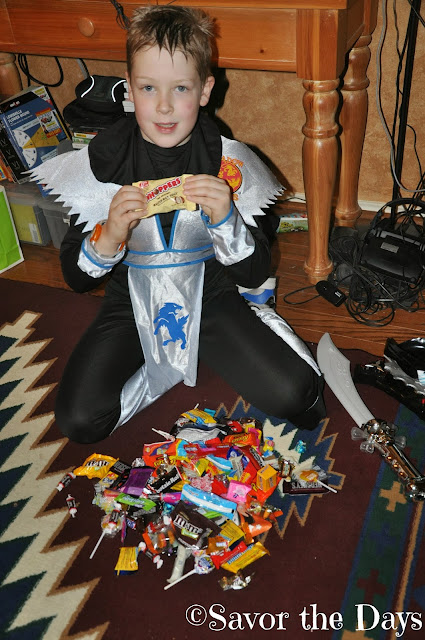 Some couldn't wait to dig in! 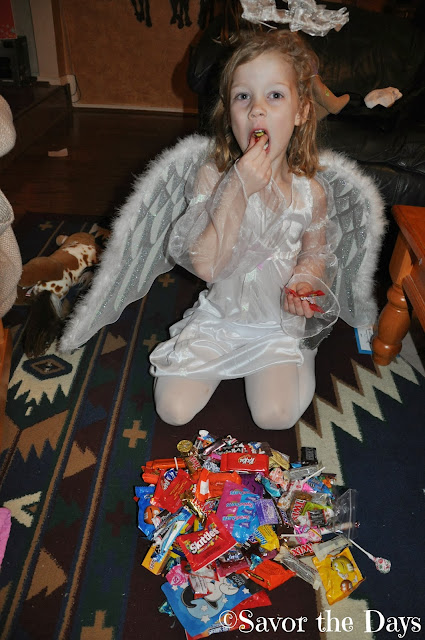