July 28, 2013
One of our local homeschool groups got a great group discount for tickets to the Mesquite Pro Rodeo.  Stuart and Nicholas have been to this rodeo one time in the past with our Cub Scout pack but Rachel and I have never been before.

Both of the kids wanted to be sure to dress the part but they had each outgrown their cowboy hats.  The last time we were at the Fort Worth Stockyards, our whole family picked out cowboy hats.   But that is such a tourist area that we can't help but think we overpaid for what we got.  So we made a trip to Cavender's Boot City in Lewisville.  I don't think of myself as a cowgirl but I had fun shopping around although I didn't get anything for myself.

There is a hat bar where they can steam and custom fit your hat.  We asked the man there to help us find the right size hats for the kids.  We thought it was neat that his name was "Chance".

Rachel wanted a pink cowgirl hat but none of them fit her quite right.  They were either too small or too big.  However, she did find a black one with a rhinestone tiara on it that she was quite pleased with.

Nicholas had outgrown the hats in the children's section and is now in the second size up from the smallest adult size.  Chance took him behind the hat bar and did some work on the hat to make sure it fit Nicholas just right. 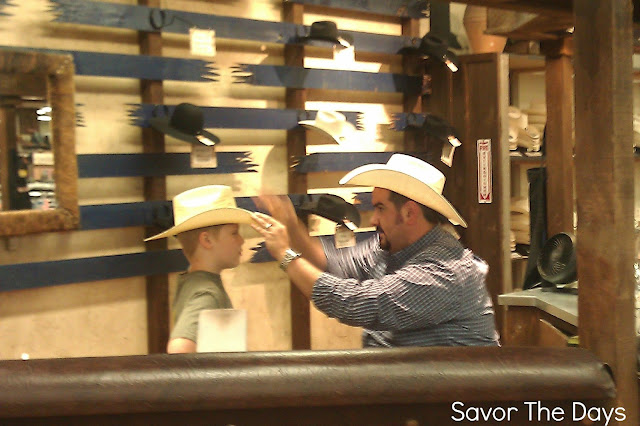 Although we had only planned to buy hats for the kids, we somehow ended up buying a little cowgirl outfit for Rachel and play gun holsters for the kids.  They were all set for the Rodeo. 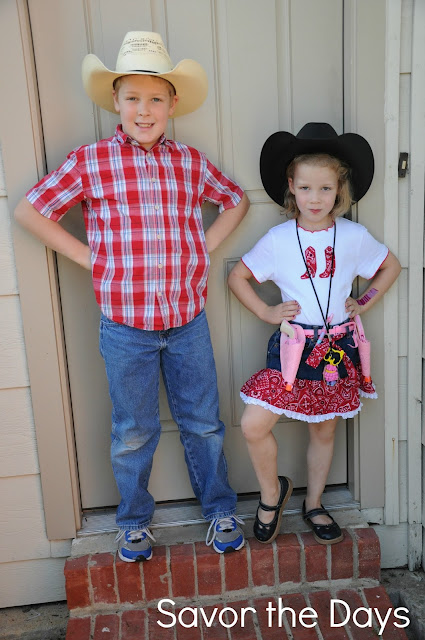 We spent way more time at Cavender's than we had planned and Mesquite is a bit of a drive from our house.  With dinner time quickly approaching, we decided to just grab some fast food through a drive through and eat dinner on the way there.  Not the healthiest food or best dining experience but hey, we had a rodeo to get to!

I was glad that Stuart had been here before because he knew just where to park and how to get into the arena.

My cute family all wearing their cowboy hats. 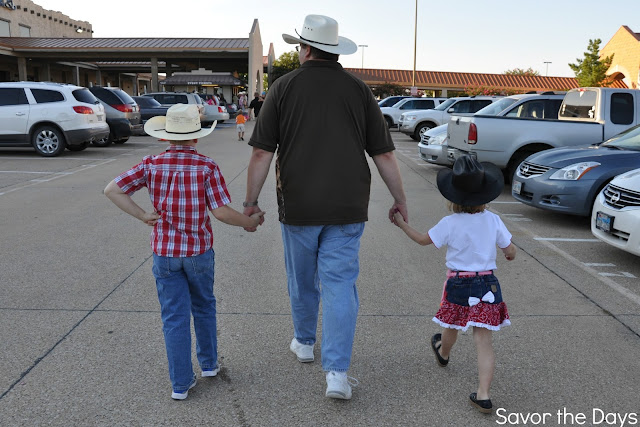 I love the patriotic atmosphere at the Mesquite Pro Rodeo.  American pride is definitely seen throughout the night. 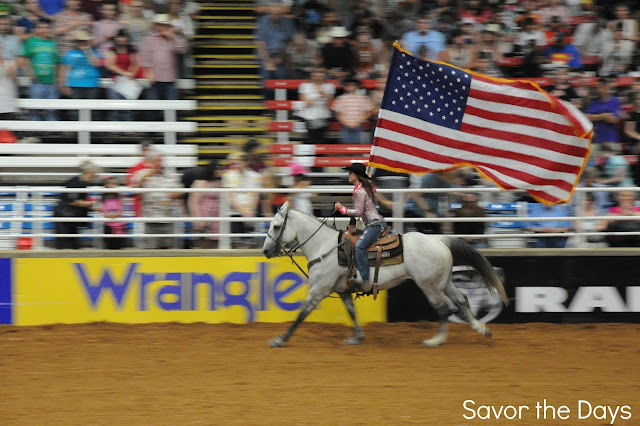 My favorite event of the rodeo is the bronc riding.  It is amazing how these guys can get tossed around so hard and still hang on to that saddle. 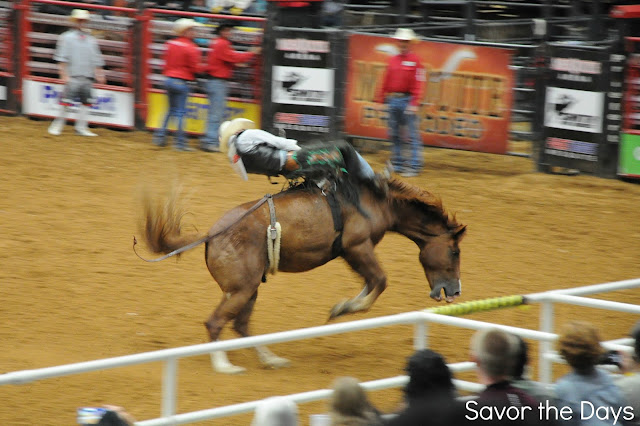 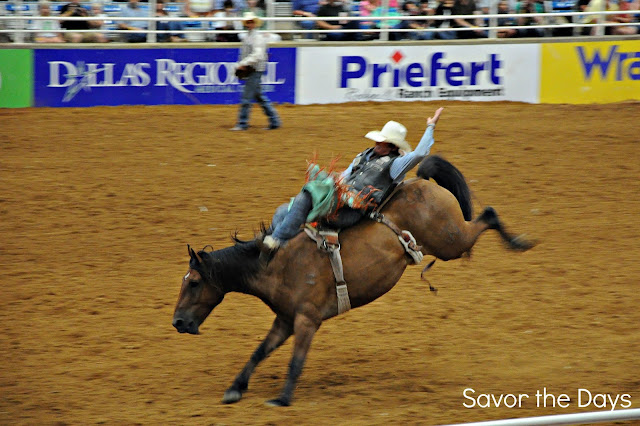 Look at this guy!  We didn't notice this when we were watching him live but the picture captures him standing up in his stirrups as he is getting bucked by the horse. 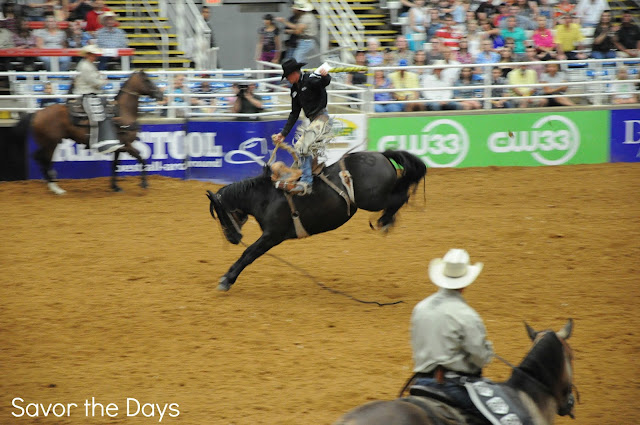 Rachel is addicted to cotton candy.  Of course, we all had to sample it too. 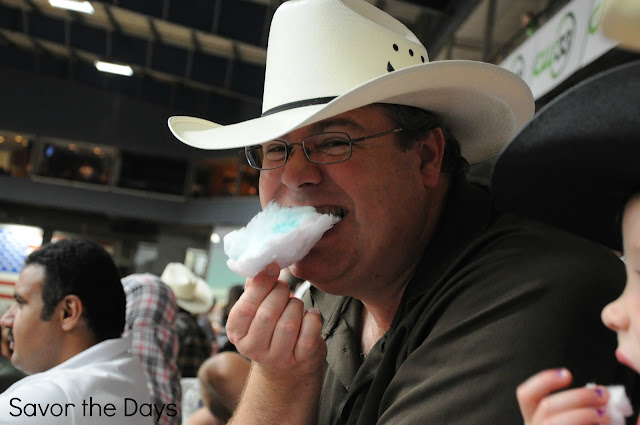 This is team roping where two cowboys race out of the gate and they work together to rope the cow.  They just got this one and you can see it is being stopped in its tracks. 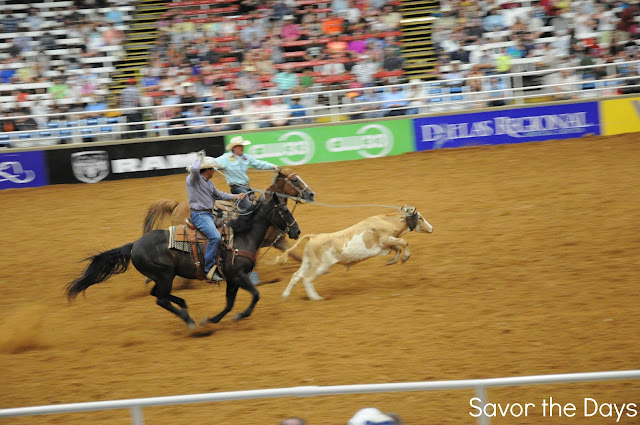 The prettiest cowgirl in the arena! 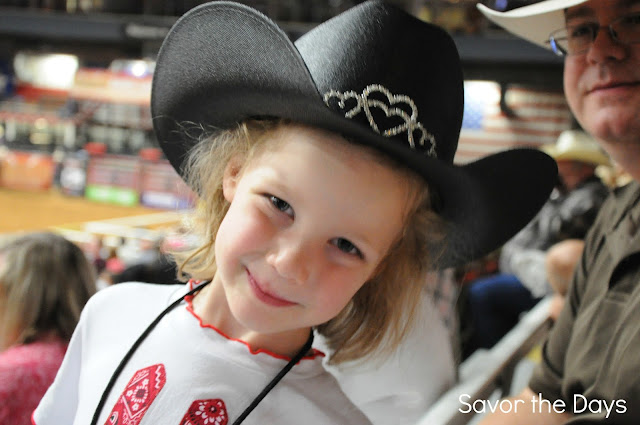 There is a Dash for Cash event in each rodeo where kids are invited out to the arena floor where they race after calves to try to pull a flag off their tails.  If they get the flag, they win some cash!  Nicholas tried.  He's in this bunch somewhere. 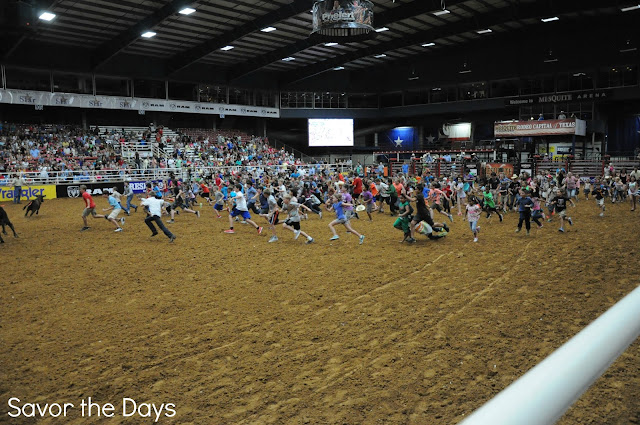 He didn't win but he did a great job trying.  I love how Stuart was right there to encourage him after the event. 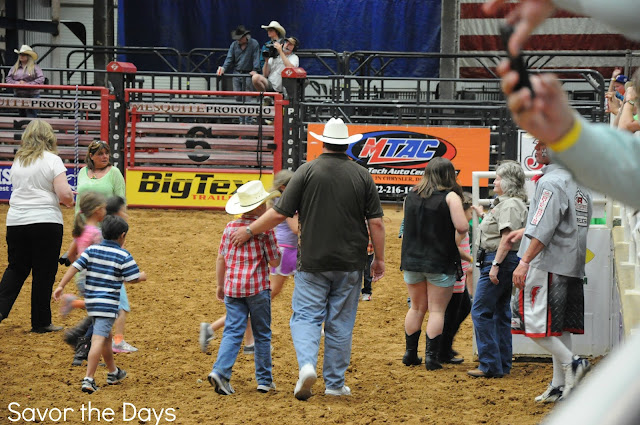 I had to get a picture of the cowboy version of a Zamboni! 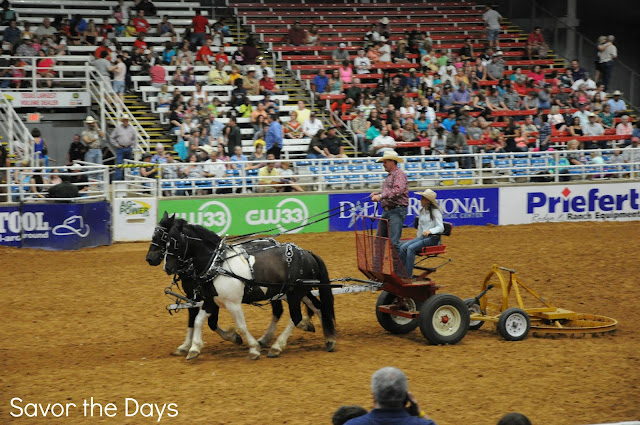 My little guy and me.  Happy times. 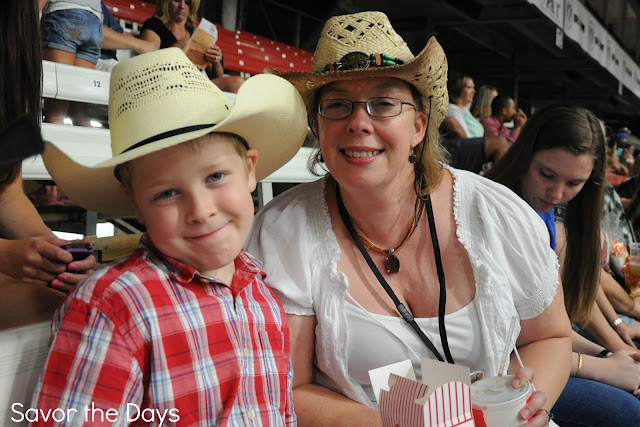 I didn't really like to see the little calves being roped because it just seemed so rough but it was still impressive to watch the cowboys in action. 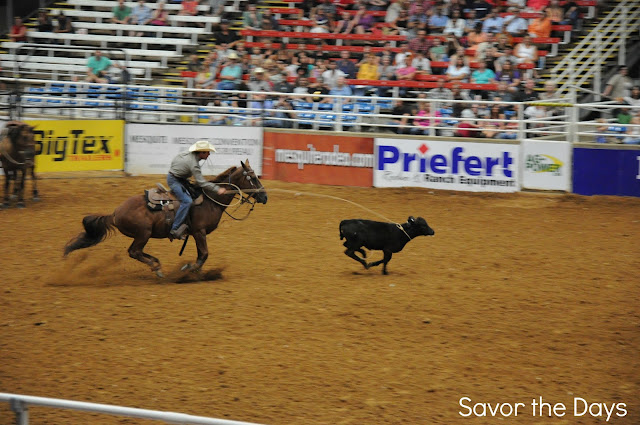 Several times during the rodeo, we got to watch this guy do tricks with his rope and his horse.  Here he is standing on his horse while spinning the lasso around himself. 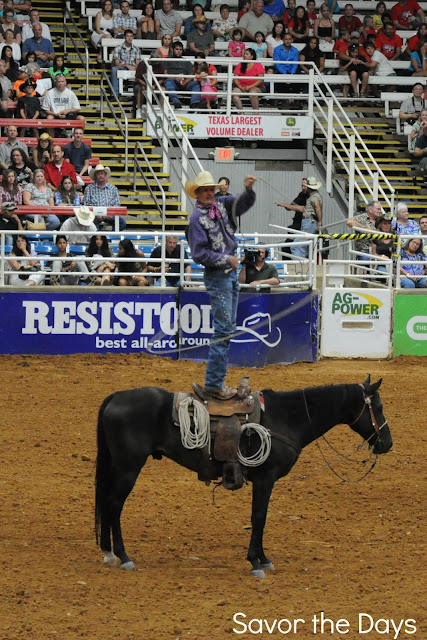 His most impressive trick was riding his horse around the arena while spinning the lasso around the horse!  Wow! 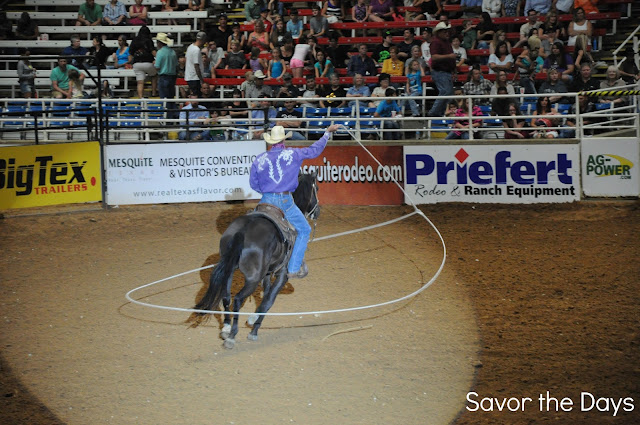 On one of my many trips taking Rachel to the bathroom, we stopped and looked at these gorgeous boots.  Of course, Rachel picked out several that she wanted.  They did sell children's sizes in some of these but I'm not interested in spending that kind of money on shoes that her growing feet won't be able to wear in six months! 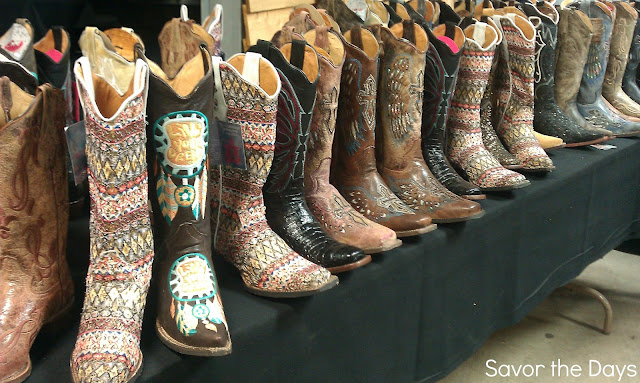 The whole crowd lit up for the barrel racing competition.  It was fun watching the horses races around three barrels to see who could finish the race without knocking over barrels. 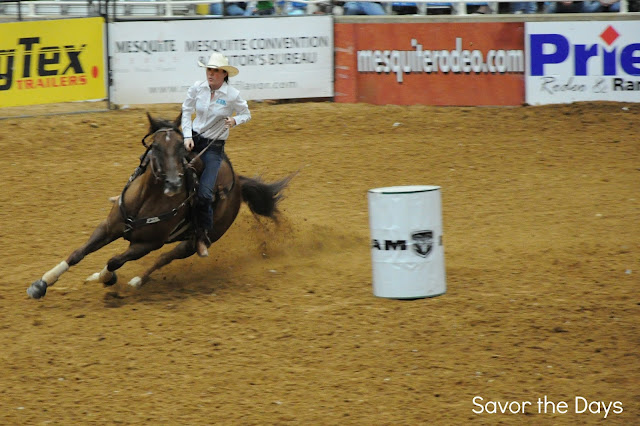 As you can see, Nicholas really got into it!  He was definitely the loudest fan in our area. 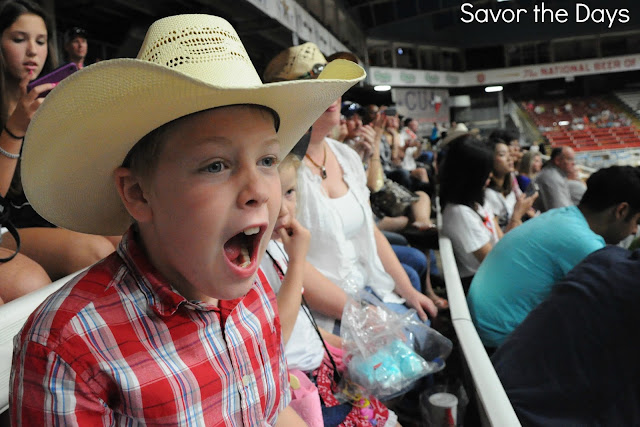 Rachel didn't root for anyone in particular.  She just enjoyed watching the action and was taking it all in. 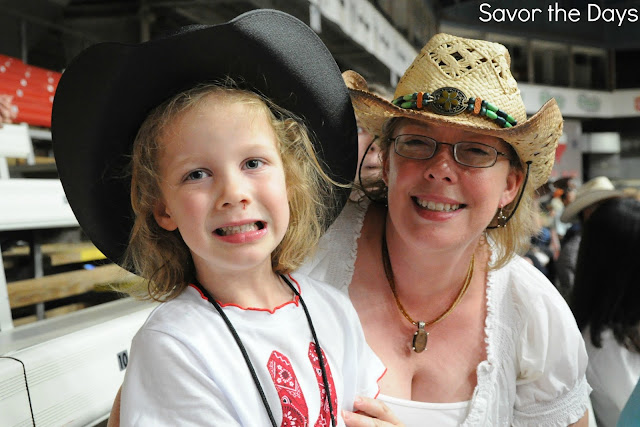 At some point, she got a pen and apparently decided that she needed to write her name on her Brand. New. Shirt.  I have to say that I'm impressed that she did this while wearing the shirt and writing upside down from her perspective. 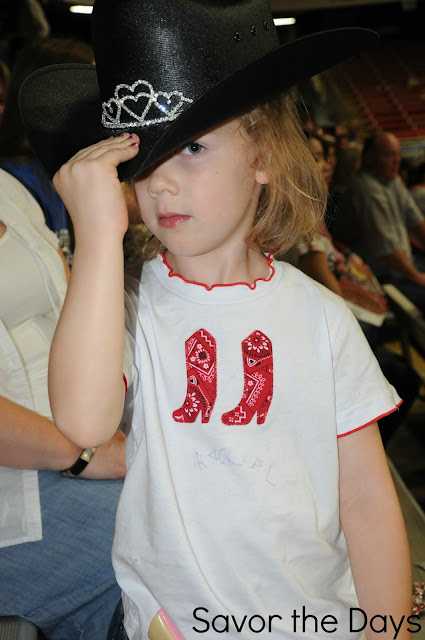 The Mesquite Pro Rodeo only runs for a few months during the summer but I can definitely see us coming to it once a year.  It was good wholesome family fun for all.