During the Louisiana floods last fall, some good ole' boys decided they couldn't just sit there watching TV while people across their city were trapped in flooding houses with the waters continuing to rise.  So they started up their pickup trucks and took their boats into the flood waters to rescue people.  They weren't asked to do it.  They was no boss, no payment, no praise.  They just did it.  They used their personal boats and paid money out of their own pockets for the fuel to do it. And they did it throughout the day and night for several days.  Anyone who jumped in their boat to help save a life became what people affectionately call the Cajun Navy.  I thank God for these guys in their boats because they rescued my in laws from the flood last year.

They developed a system of communication through a phone app called Zello which turns your phone into a walkie talkie that can communicate with anyone on your channel.  The rescuers used Zello to find out where they needed to go for rescues.  It was a brilliant solution.

When Hurricane Harvey hit the Texas coast, the Cajun Navy decided they couldn't just let their fellow Texans stay trapped in their flooded homes so they loaded up their boats and came to Texas.  They used the same Zello app for communication. 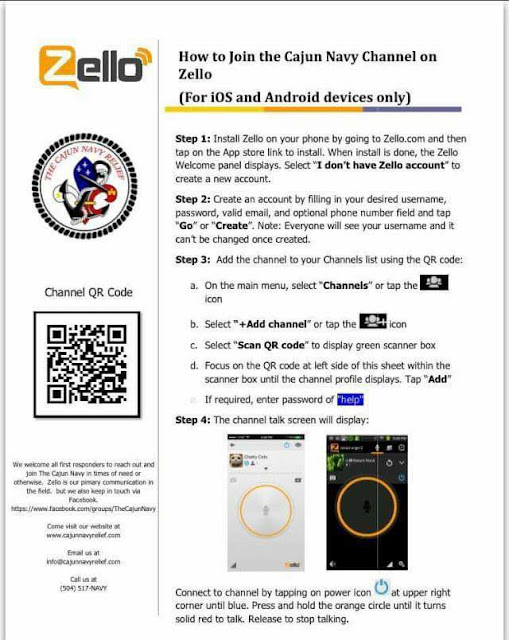 People in need of rescue or if they knew of someone who needed rescue could send a text message or fill out a form that would ask for information like how many people, any pets, and any medical issues.  This data was then compiled into a spreadsheet that was used to get rescuers in their area out to save them. 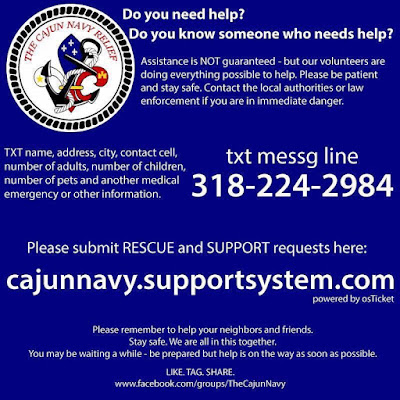 There was a lot of people like myself who wanted to help with the rescues but who were not in Houston or didn't have a boat.  We were able to help out behind the scenes though.  Some people were posting on The Cajun Navy (Rescue Ops) Facebook page asking for rescues so I was asked to monitor that page to help them fill out the form so they didn't get overlooked.  Sometimes I called them to see if maybe they had been rescued since they first posted or if not I got the information from them to fill out the form for them.  It was challenging talking to these people.  It reminded me of my days in social work because these people were in crisis, some were crying, some were terrified, some were completely at a loss as to what to do.  I could really relate with a mom I spoke with.  She had talked to her son and daughter in law the night before and they had water up to their knees in their house.  They had lost power and the son's cell phone battery died while on the phone with his mom.  The mom had not heard from them in about 18 hours and she was an understandable mess.  It reminded of me of how worried I was for my family last year when their town was flooding and I couldn't get in touch with anyone.

As hard as it was, it was also incredibly rewarding to get text messages like this one below from a man I had spoken with.

Or emails from the Cajun Navy that someone I had entered on their form had been rescued.

The kids heard that Dallas had set up a shelter for people who evacuated Houston and that they were in need of supplies.  We talked about how their grandparents had been taken to a shelter and they had nothing with them but the wet clothes they had been wearing.  Rachel decided to start a drive to gather donations for the people in the Dallas shelter.  She was pretty excited to see all the donations her friends so generously gave. 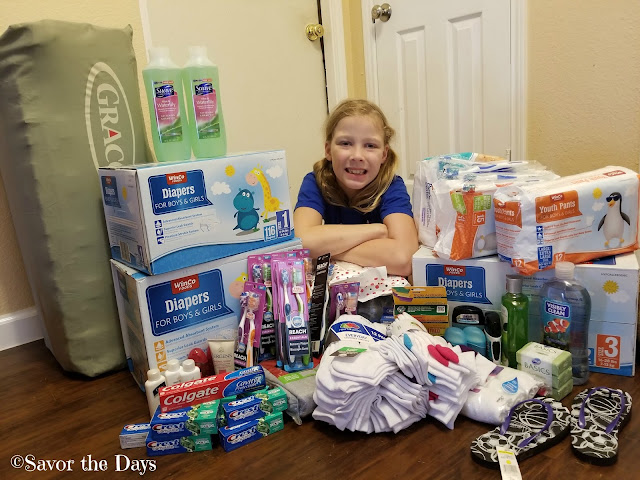 We took everything to Trusted World who is managing the shelter.  The line for dropping off donations was quite long.  What a wonderful problem to have! 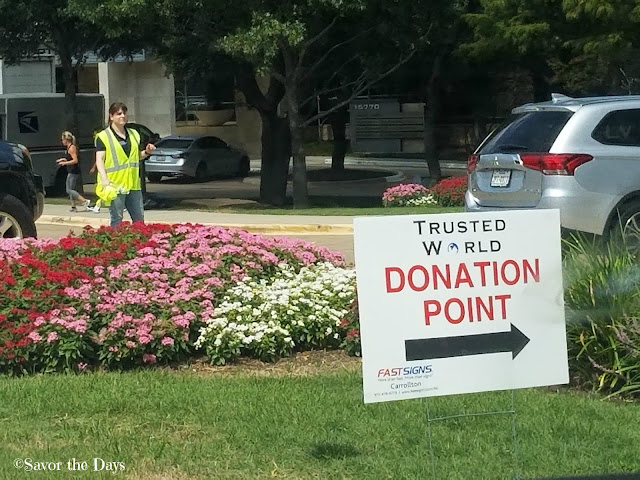 This truck came in from Arkansas to deliver items to the shelter.

The Red Cross was there too. 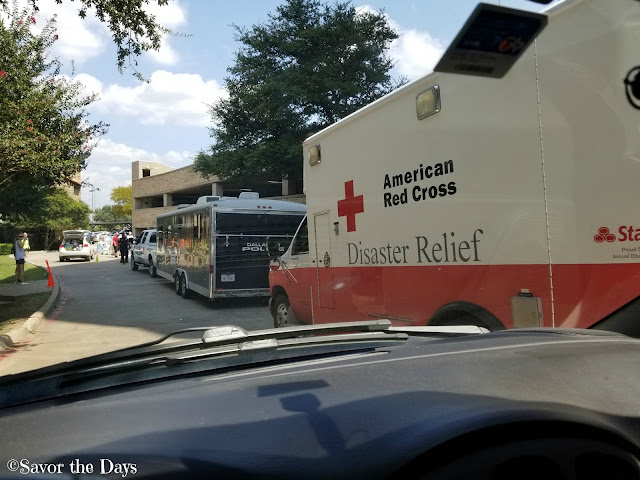 As we left we saw stacks and stacks of items that had been donated.  I hope that these items can bring at least a little bit of comfort to the hurting people of Houston. 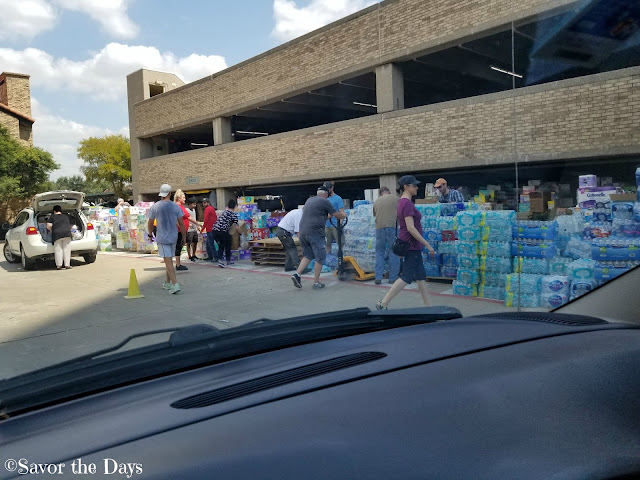 Our church, Valley Creek, is also collecting donations for for people affected by Harvey.  Here is their drop off information.  Please consider donating even if it is just a few items. 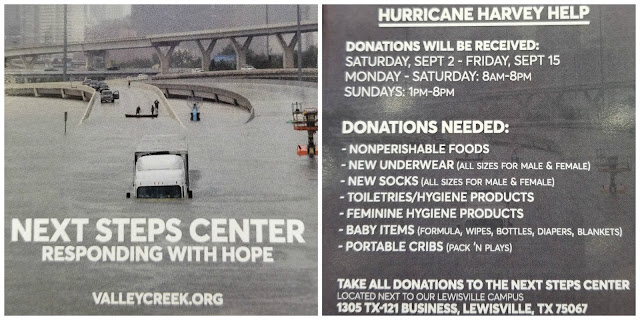 Donations for personal items are still being accepted but I also want to recommend another way to donate that will incredibly bless the people who have been flooded.  Now that the waters have receded, there are hundreds of thousands of homes that are wet and starting to grow mold.  There are not enough government workers or even private companies to go in and tear out the ruined material before mold takes over and completely ruins these homes.  But there is another group of volunteers who have committed to come in and help gut the wet stuff to try to save these homes and that is The Cajun Army.  I helped them behind the scenes last year and I can tell you there will be work to be done for months if not a year getting to all of the homes that were affected.  The Cajun Army is all volunteers who just want to help their neighbor.  They do not accept monetary donations but they do have an Amazon wishlist which will provide the volunteers with tools, respirators, air mattresses to sleep on, etc.  Here is the link to their wish list:  https://www.amazon.com/hz/wishlist/ls/3315Y979AL1OV/ref=cm_go_nav_hz
Please consider helping them out with some of these items.
at September 01, 2017
Email ThisBlogThis!Share to TwitterShare to FacebookShare to Pinterest
Labels: Rachel, volunteer