June 21, 2017
As part of our homeschool studies on the original 13 colonies, the American Revolution, and the founding of America, we have had the fun privilege of reviewing Adventures of Rush Revere #1 New York Times Bestselling Book Series by Rush and Kathryn Adams Limbaugh.

I was so excited when the box came in the mail and inside were the five beautiful hardback books in the Adventures of Rush Revere Book Series.  The books are beautifully printed with colorful pictures, maps, and diagrams and pages that look like old parchment paper. 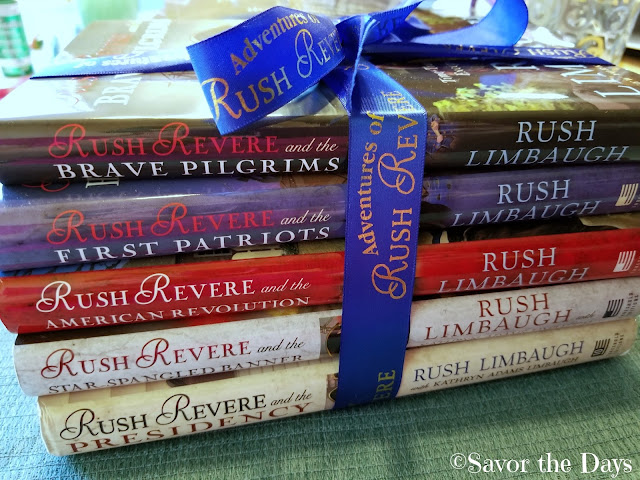 The Rush Revere books explain the history behind the founding of America and what makes this country the greatest country on earth.  The stories are told through the eyes of Rush Revere, a substitute history teacher who knows how to make history fun for his students.  He has a snarky sidekick named Liberty who happens to be a talking horse who can also turn invisible.  But best of all, Rush Revere and Liberty can travel back in time as they say "Rush, rush, rushing to history!".  They witness the most famous moments of American history in person and meet some of the people who helped to make this country so great.  Some of the students in Mr. Revere's class get to travel with them and learn history first hand as if they were right there when it happened.  Wouldn't that be fun?

Rush Revere and the Brave Pilgrims (Book One)

In book two, we learned about the Stamp Act and why the colonists opposed it.  We met Benjamin Franklin and learned that the colonists did not feel like the King was taking care of their needs and they were angry over the excessive taxes they were forced to pay.    We traveled to Virginia and met Patrick Henry.  We met King George III and watched the Boston Tea Party take place.  We learned about the Sons of Liberty and witnessed the Boston Massacre.  We talked with John Adams and George Washington.

In book four, we learned all about the American flag as a great symbol for our country.  We visited the White House.  We learned that the bald eagle was chosen as a symbol of strength and freedom for our country back in 1772 when the Continental Congress was creating the Great Seal of the United States. We also learned the importance of the three colors on the American Flag - white symbolizes purity and innocence, red symbolizes hardiness and valor, and blue symbolizes vigilance, perseverance, and justice.  We visited the Washington Monument and the National Archives where we looked at the Declaration of Independence, the Bill of Rights and the United States Constitution.  We learned about the structure of the government and the importance of checks and balances.  We witnessed the Constitutional Convention in Philadelphia in 1787 and met James Madison, Father of the Constitution.   We learned about the Bill or Rights and visited the Lincoln Memorial, the Capitol Building, and the Supreme Court.  Most importantly, we learned about Francis Scott Key writing the national anthem, The Star-Spangled Banner.

In book five, we learned how the Constitution defines the qualifications required to be President of the United States such as be at least 35 years of age, a U.S. citizen, and be a resident of the U.S. for at least fourteen years.  We witnessed George Washington give his presidential oath and met his wife, Martha.  We learned a lot about politics and political campaigns including the importance of debates, political parties, speech writing, dealing with competition and criticism.  We also met Abigail Adams and Thomas Jefferson.

My kids and I took turns reading the books aloud to each other.  Both of my kids have enjoyed these books.  Rachel is 8 years old and she says the books are "Awesome! They are fun to read like a kid's story and not like a school book."  Nicholas is 13 years old and he rolled his eyes a little when we started reading the first book, Rush Revere and the Brave Pilgrims, but as we got further into the story he was laughing out loud and asking to read "just one more chapter".  I personally felt the same way.  I enjoyed reading them with the kids and didn't want to put them down.  It was just fun seeing history come to life as the characters in the stories met real historical figures in American history.

Rush and Kathryn Adams are very passionate about teaching kids about patriotism and how great America is.  They have even put together an amazing website full of additional resources for parents and children.  Here are some of the fun things you will find at the www.rushrevere.com:


If you would like to learn more about the Adventures of Rush Revere book series, please check them out online:


This was a fun review through the Homeschool Review Crew.  If you would like to read other reviews on the Adventures of Rush Revere book series, please click on the banner below.