We got to take a tour of our favorite radio station, KLTY 94.9. 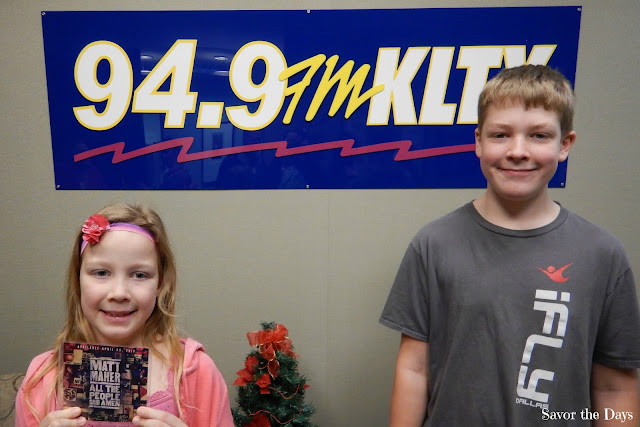 When we opened the door and walked into the lobby we were greeted by hundreds of toy donations all over the room!  Rachel was amazed! 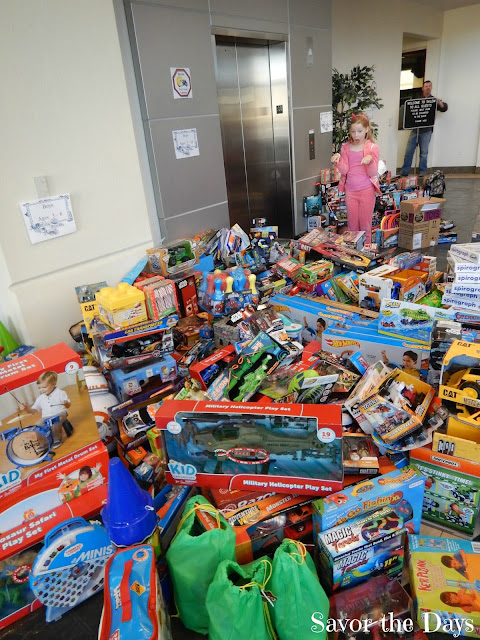 There are several stations located together in the same building because they are all owned by Salem Communications.  But Rachel quickly found the KLTY door.  Look at her excitement! 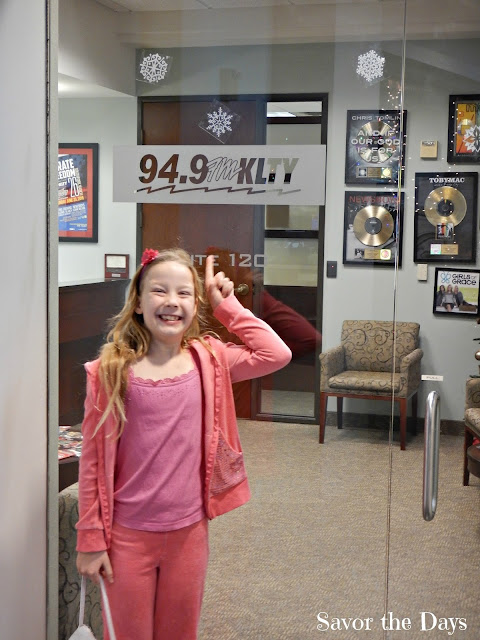 Our tour guide was Jay and he was amazing!  He knows his radio stuff but he was also hilarious and made sure we were laughing the whole time.

Look at those signed guitars!  Wouldn't you love to have just one of those? 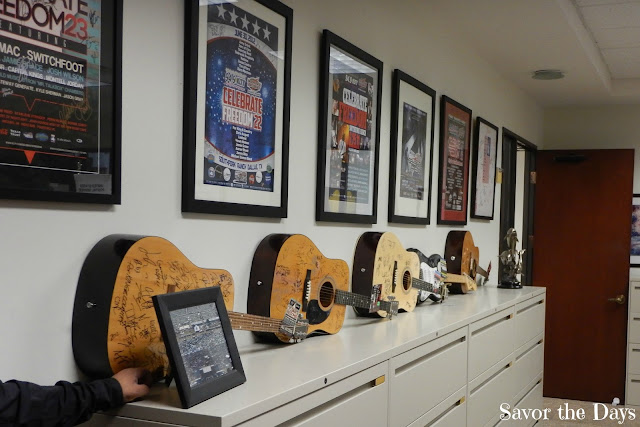 Jay used to work for Disney so he has lots of unusual Disney things including a giant Olaf....in a grass skirt playing a ukulele.... 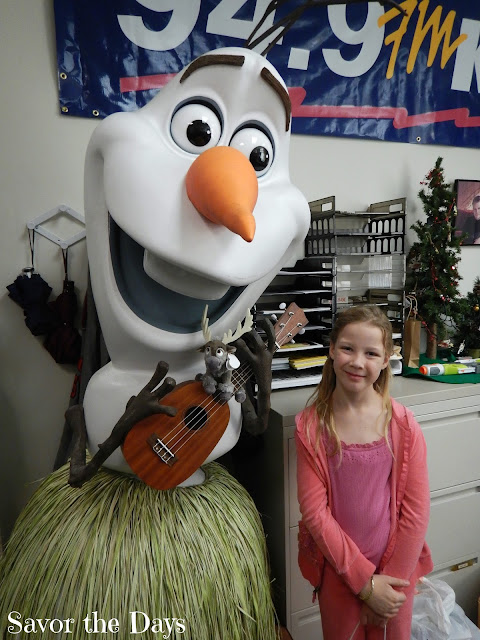 We learned about the Recording Industry Association of America's certification of Gold and Platinum albums.  A gold album is one that has sold 500,000 copies whereas a platinum has sold 1 million.  If an album sells 2 million or more it is called multi-platinum.  I also learned that there is even a classification of Diamond for an album that has sold 10 millions copies.  I had to research if there were actually any Diamond albums.  There are a few.  Garth Brooks has had 7 Diamonds, while the Beatles have had 6, and Led Zeppelin has had 5. 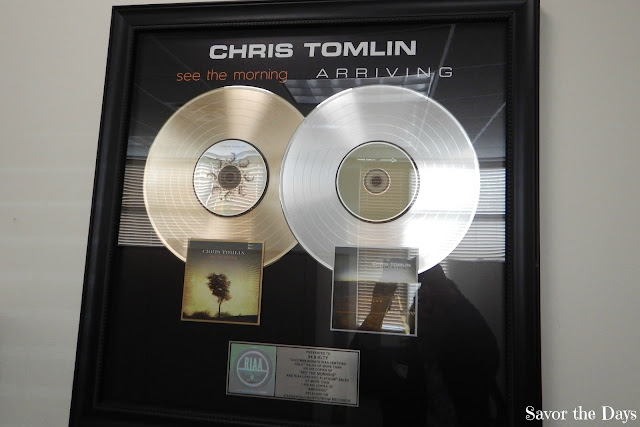 We got to go into the live studio where Bonnie Currie was on the air.  The show is programmed to play music and commercials automatically so she was able to take some time to talk with us.  She explained how they program what goes on the air and even took questions from the kids.  I was so proud of Rachel for asking her a question about how they get the music they play.  Bonnie said they pretty much download it in a digital format so it is ready to go play in through the computer. 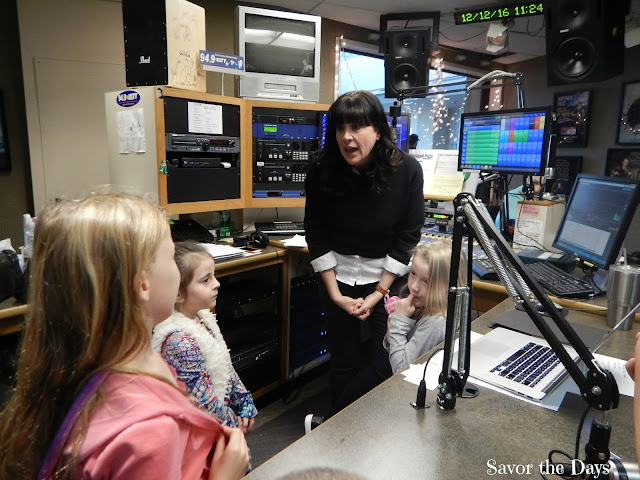 Before we left the studio, Bonnie had the kids make a recording that she then played on the air while we were standing there.  That was so cool!  Check out the video below...

Next we went to another studio that was part of the Word 100.7 Christian talk radio.  We discussed the differences between the music studio and the talk radio studio.  There was a lot more equipment in the music studio and the DJ stood the whole time.  Whereas in the talk radio studio, there wasn't as much programming equipment and the DJ sits the whole time and there are seats in a semi-circle for guests on the show.  It's a more conducive setting for casually talking for a while. 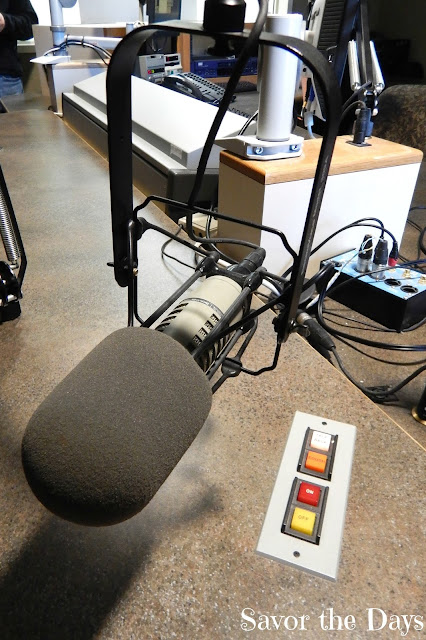 Our tour guide then had a pop quiz for the kids to see how well they listened on the tour.  Both of my kids won music CDs as prizes for answering questions correctly. 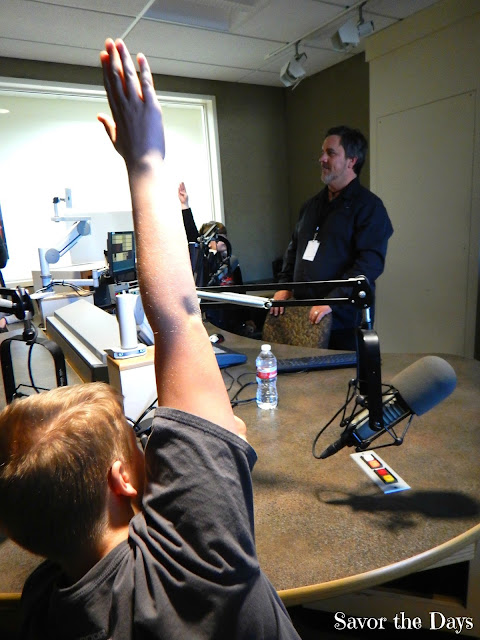 Rachel won Matt Maher "All The People Said Amen" CD.  Nicholas won Citizen Way "Love is the Evidence" CD.  They are both great albums and they are so excited to have won them! After the tour a few of us went to lunch together at Salsas in Irving. 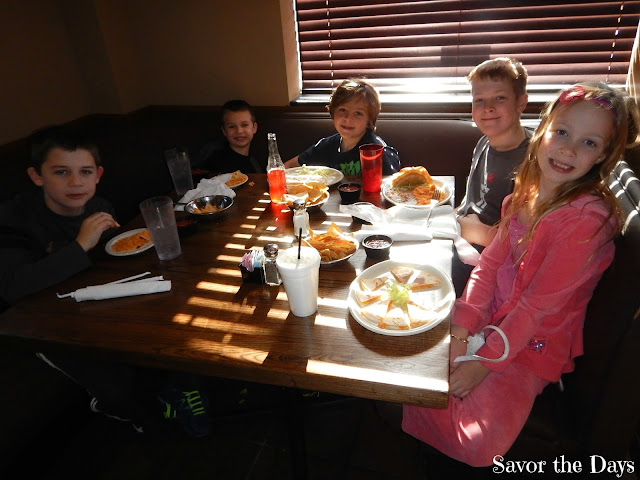 The tour at KLTY was free and we learned a lot.  The station is part of Salem Communications which is located at 6400 North Belt Line Rd in Irving, TX.  For information about tours check out the KLTY website or find them on Facebook.
at December 12, 2016
Email ThisBlogThis!Share to TwitterShare to FacebookShare to Pinterest
Labels: field trip, free, friends, homeschool, music, Nicholas, Rachel