Play in the Rain and Stomp in the Mud

Rachel started the day playing with rubber stamps.  She got out the pirate set as well as some holiday stamps and bug stamps.  She loves to cut things out so of course that was the next thing she had to do. 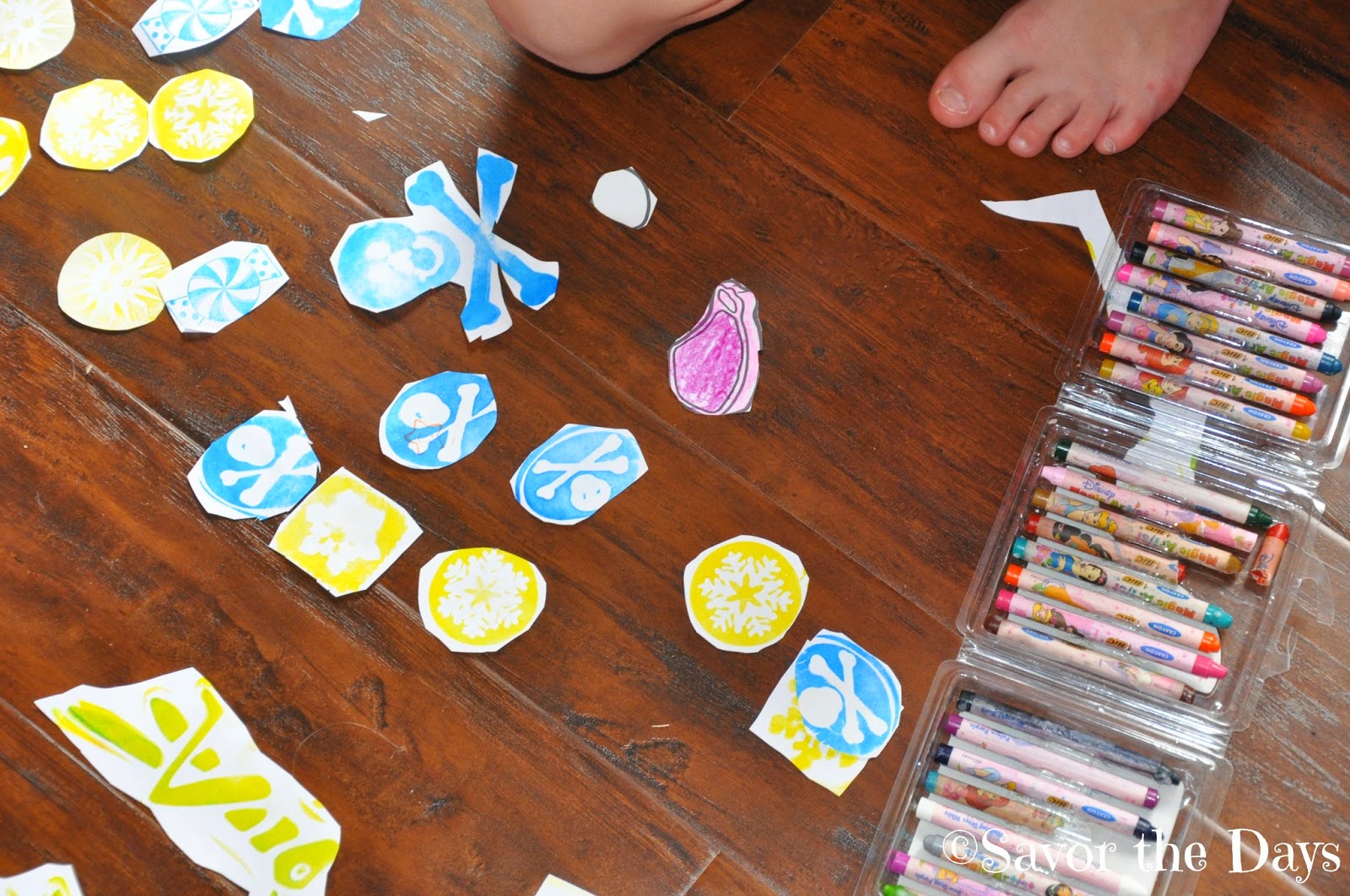 Once her stamps were cut out, she and Nicholas decided to use them to set up pretend stores.  Some of the cut-outs became money and others became items to trade for.  Nicholas even created some of his own drawings like a treasure chests and blocks of gold and platinum. 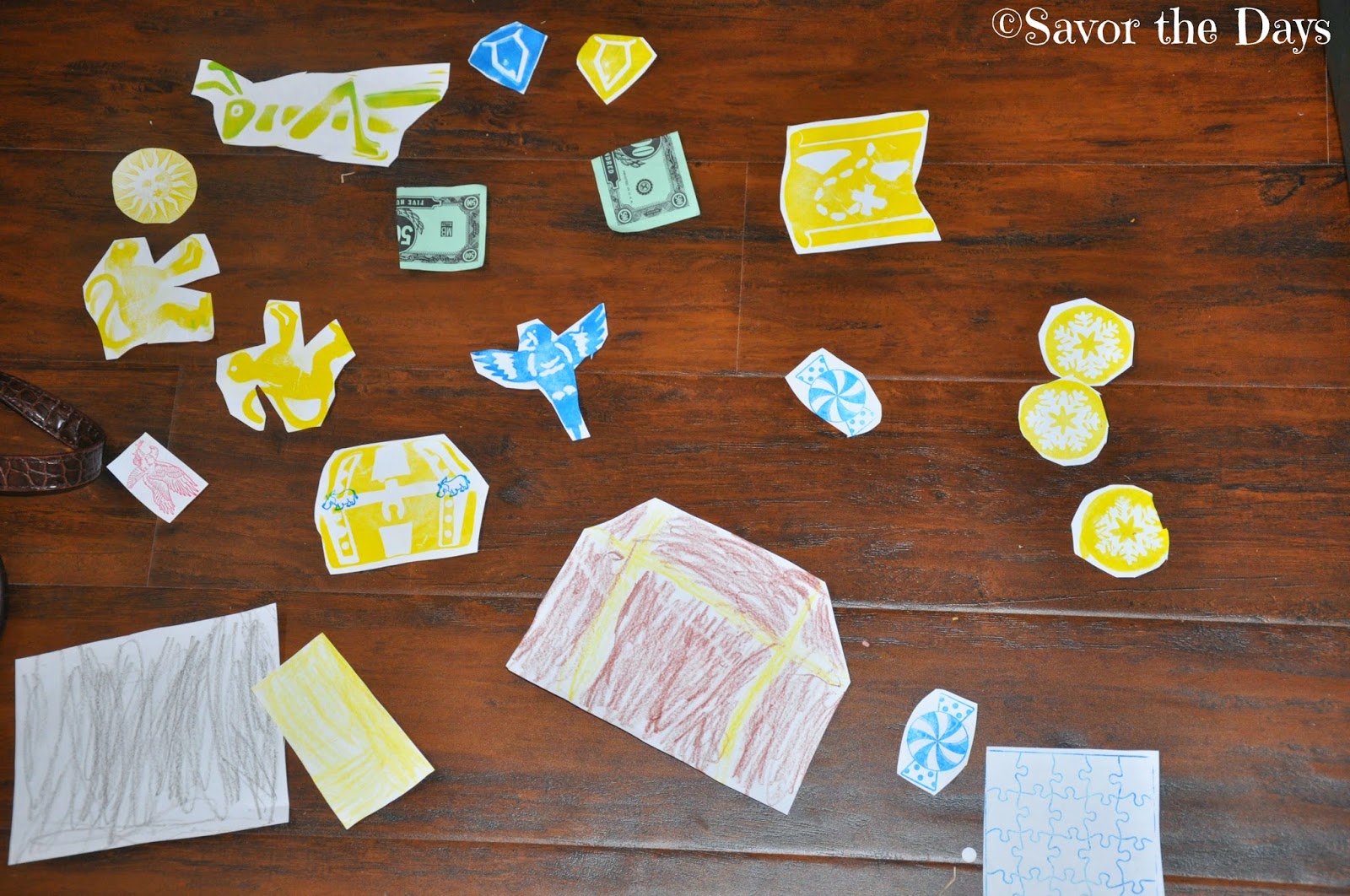 He also made a squirrel and mango which Rachel promptly "bought" from him and put in her doll stroller.  Now the squirrel has a healthy snack to eat when he wakes us from his nap. 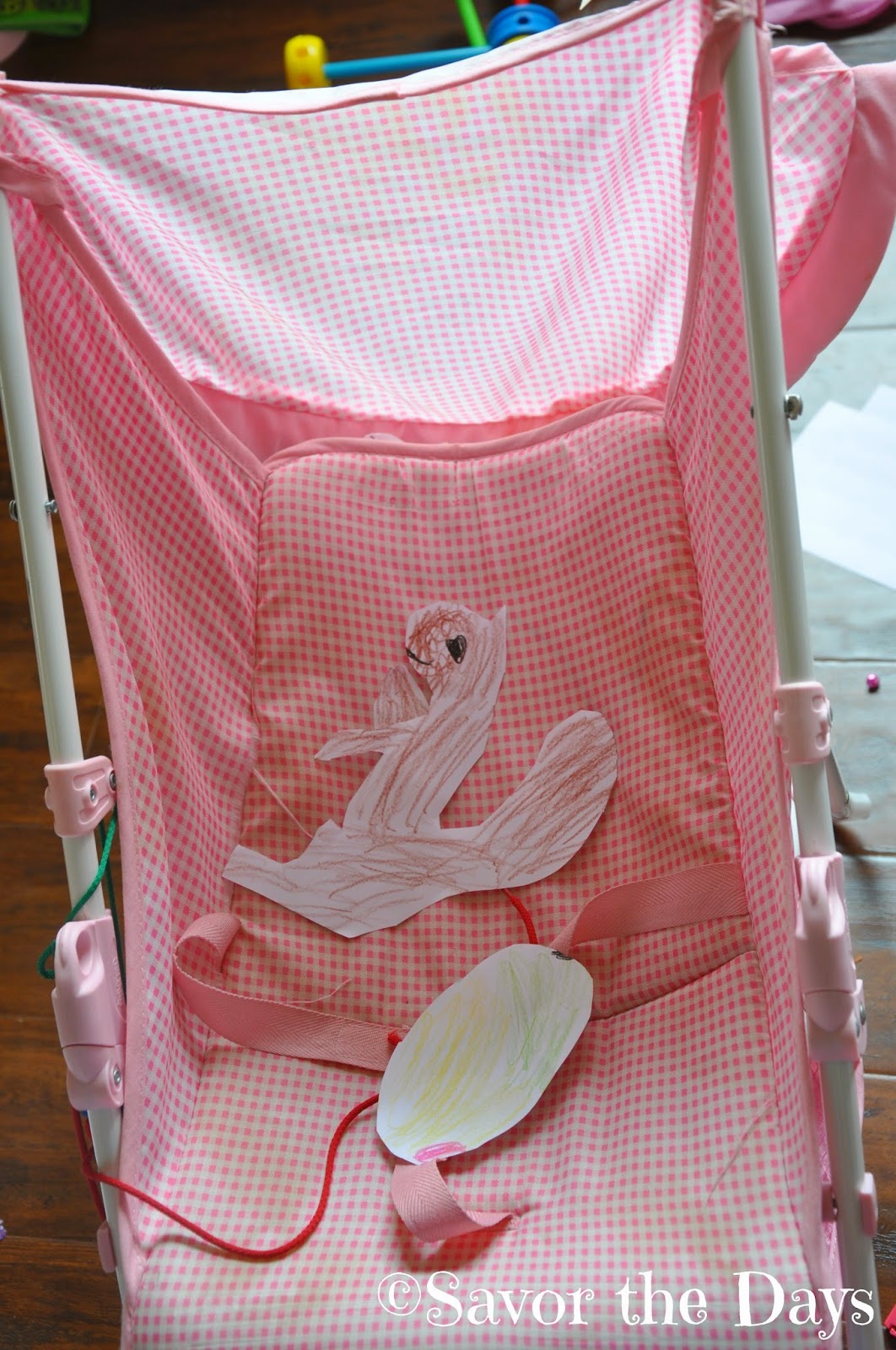 We had our plan for the day a little mixed up.  Instead of playing outside in the morning when it was sunny, we were inside.  Then when God blessed us with a glorious rainy afternoon, the kids raced outside to play.  Yep, in the rain.

I love this picture of Nicholas as he puts his finger to his chin to think up a plan for their next adventure.  I did tell him that he had to put the metal umbrella down during the rain storm though because it could attract lightning (although our tall trees would probably be more of an attractant). 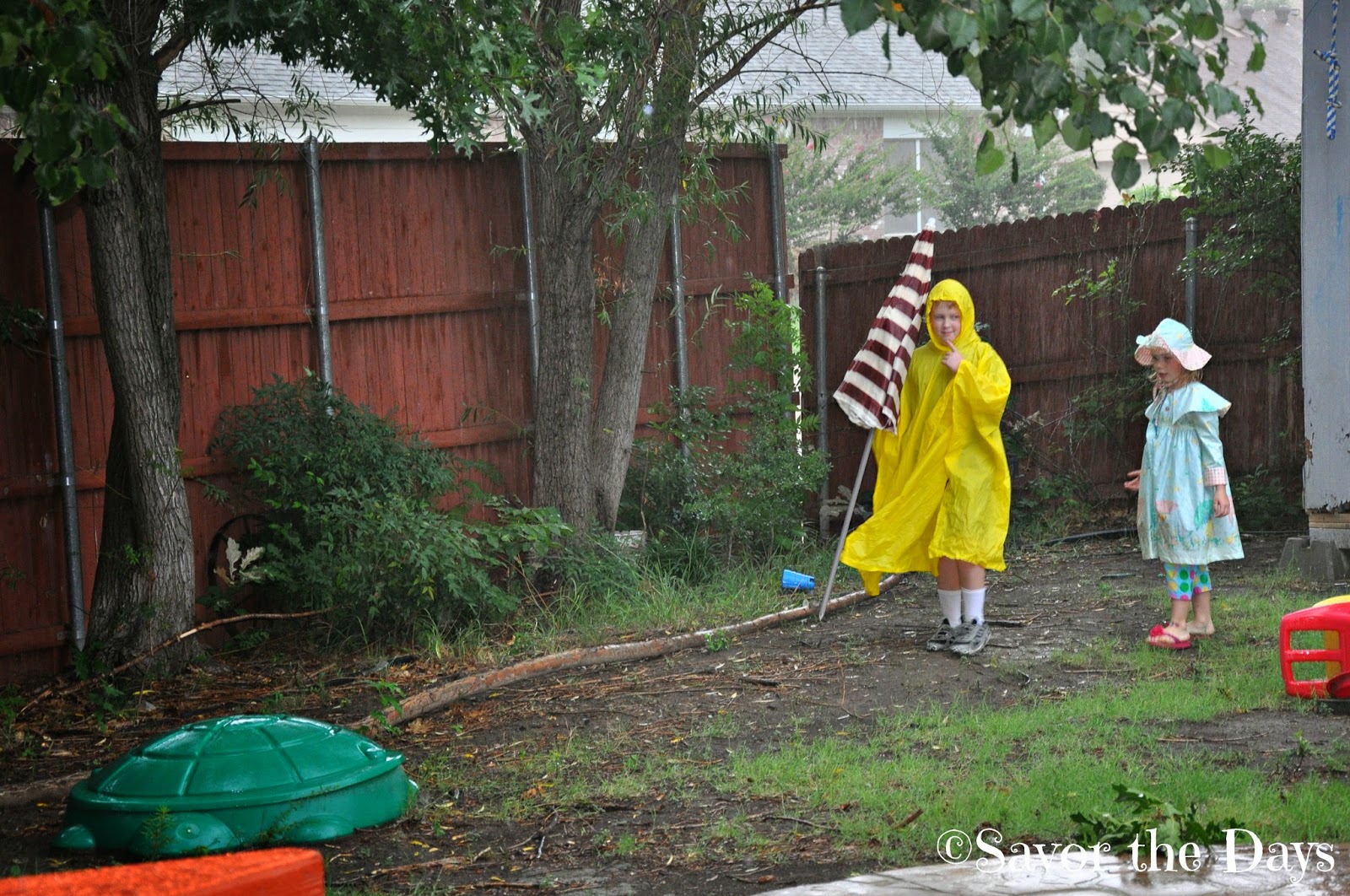 Suddenly the rain started getting heavier.  Instead of running back inside, Rachel just kept walking away from the house.  She found the really muddy spot in our yard and we had some fun stomping in the mud! 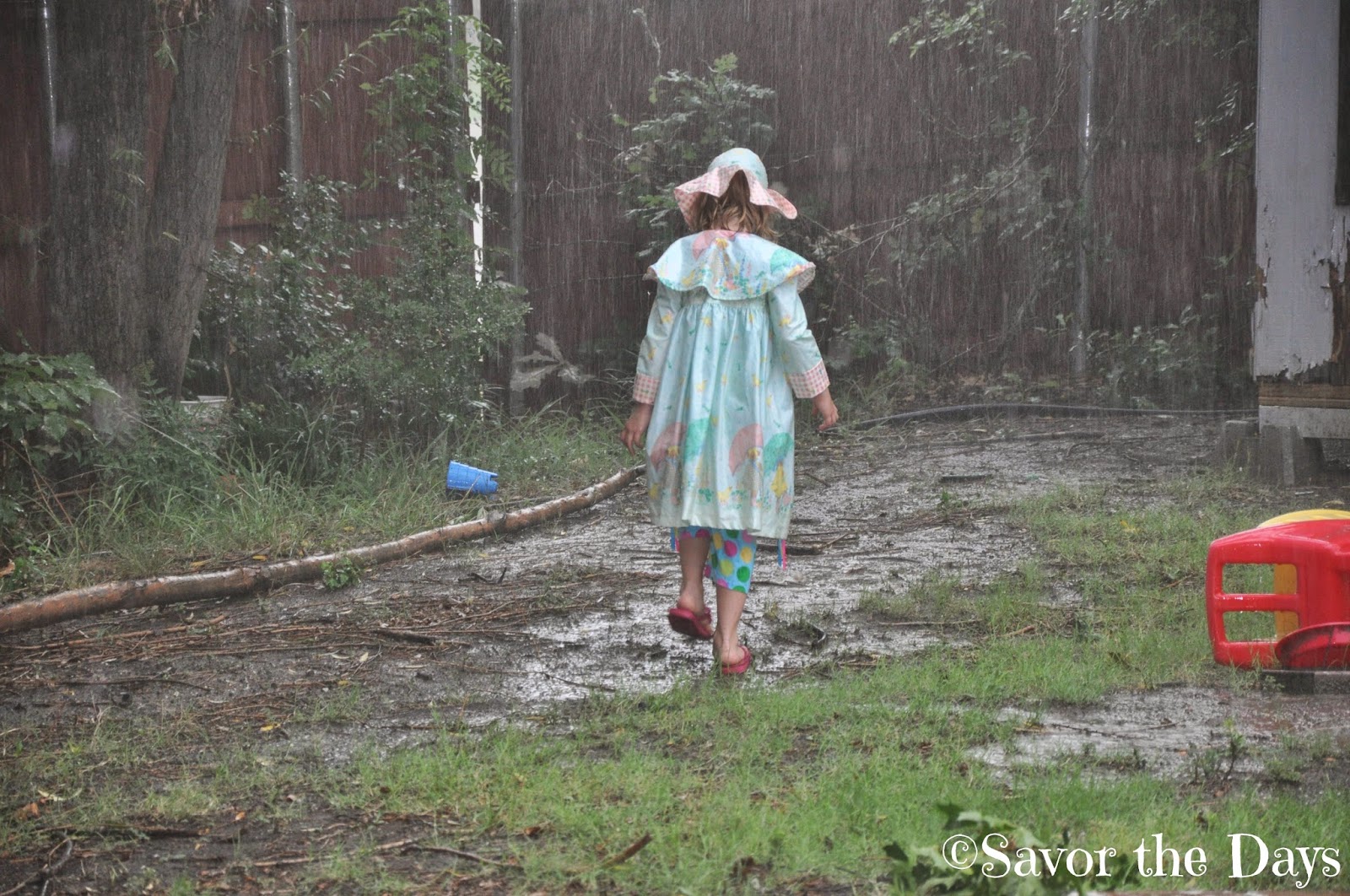 The rain didn't seem to bother them at all.  They didn't even seem to mind once the thunder and lightning started.  I had to call them back in or they would have probably stayed out there the whole time. 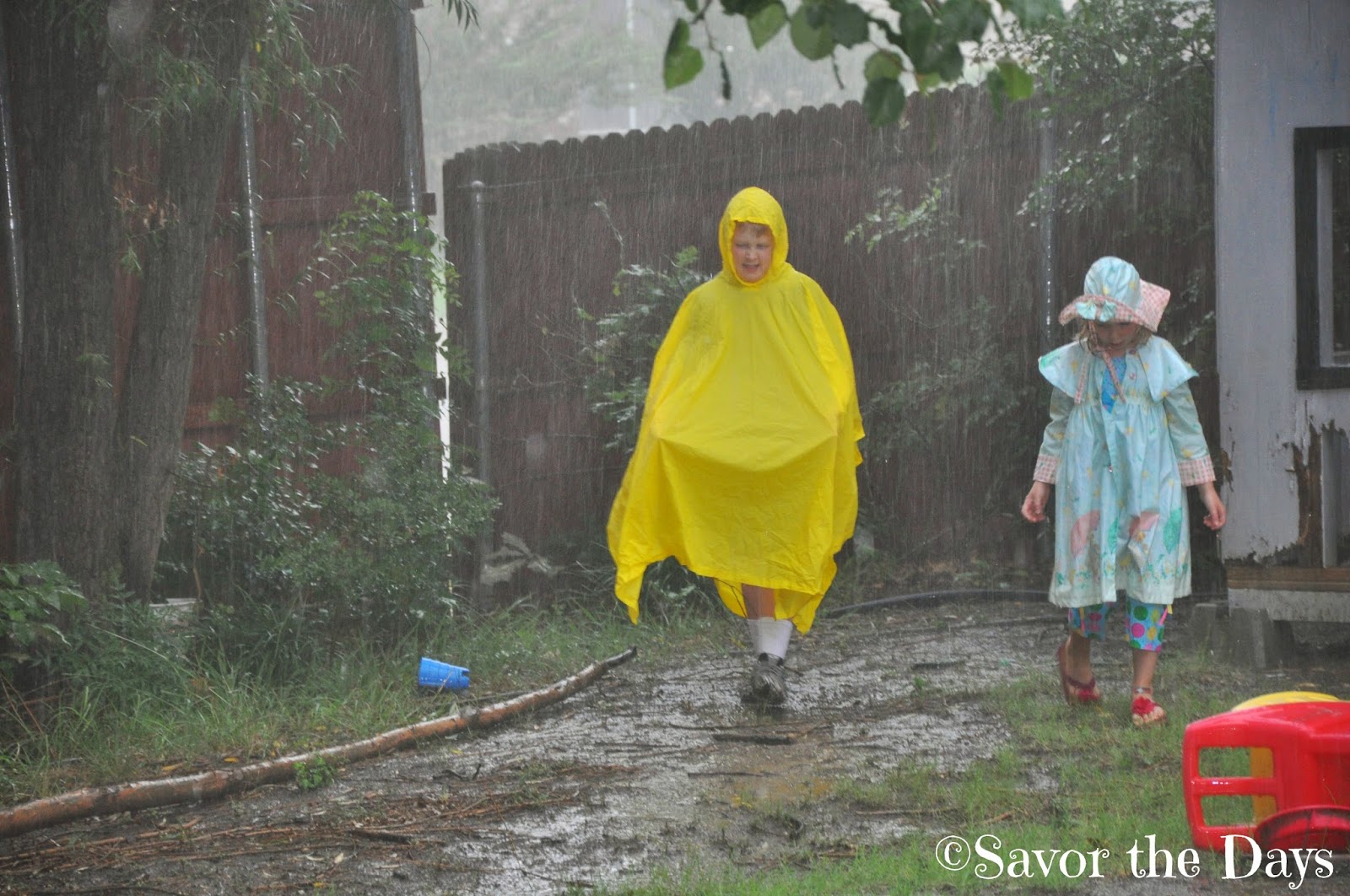 Rachel has an adorable little raincoat and hat that our neighbor gave her.  It is really too small for her now but she insists on wearing it because she loves it so much. 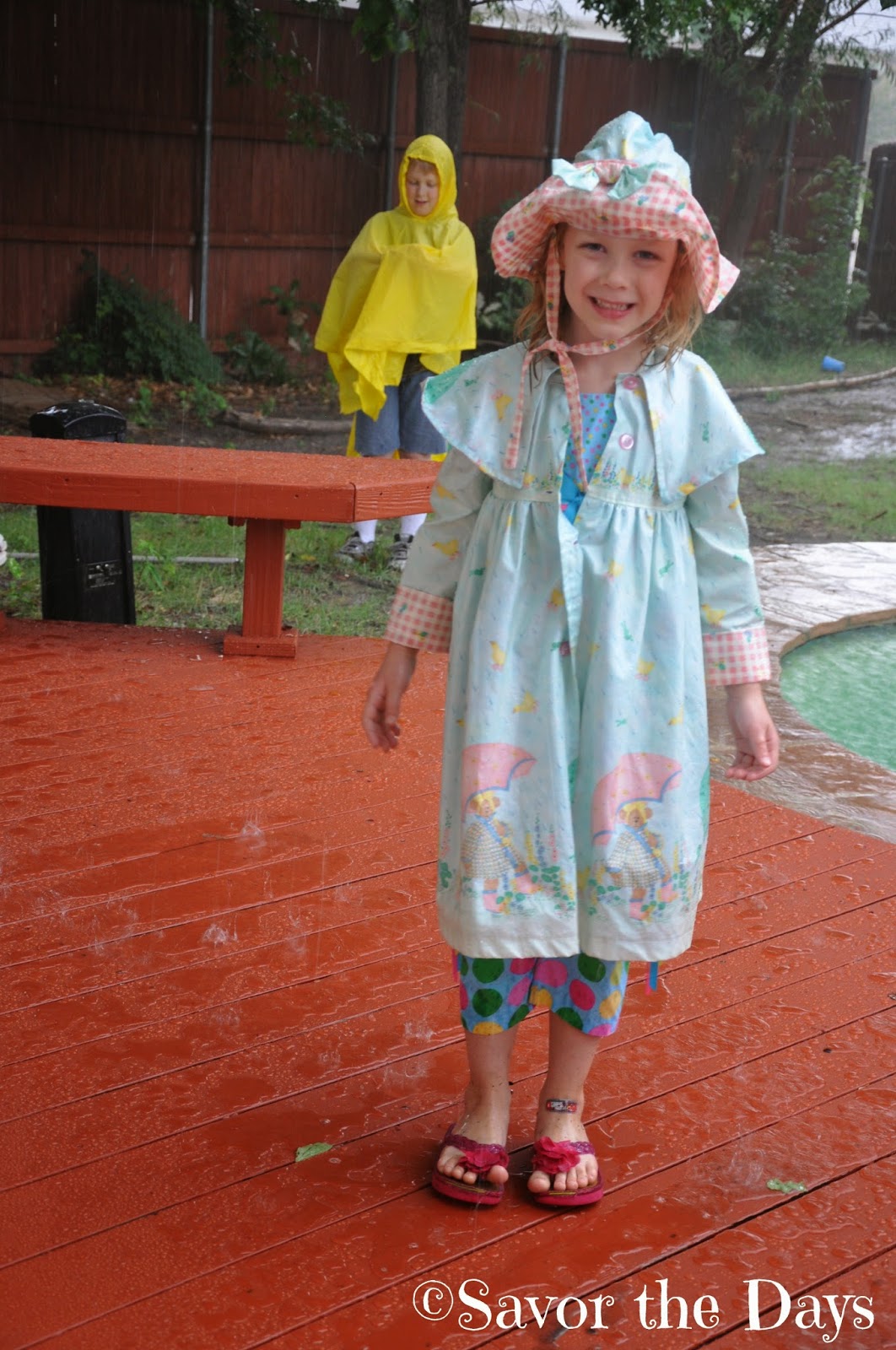 I let the kids stay on the deck under the roof overhang so they could still just watch the rain but stay out of the mud.  As they were watching, the rain got heavier and the wind suddenly started blowing the rain around like crazy.  I love the surprised look on Rachel's face when she saw it "raining sideways" for the first time. 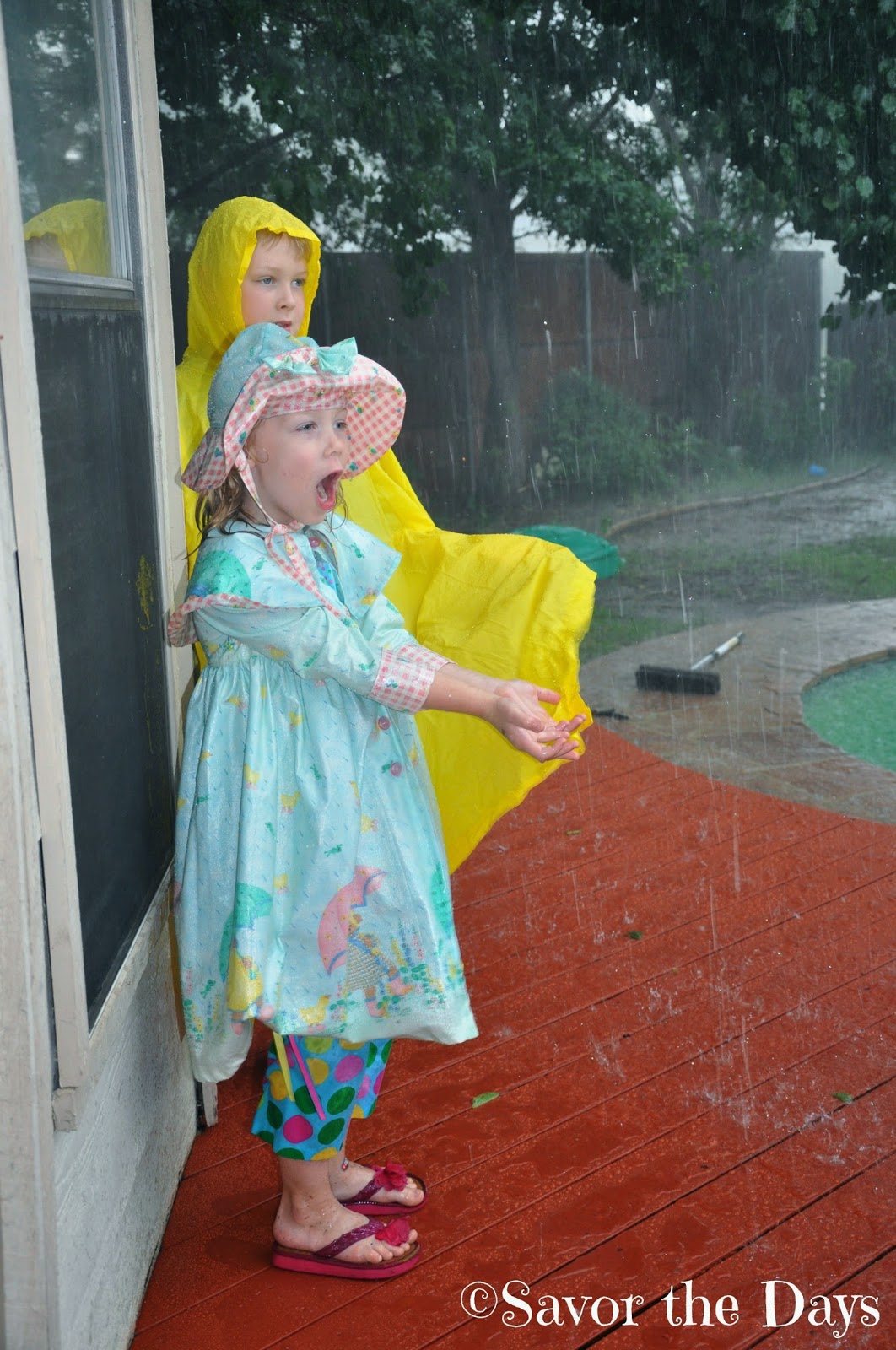 Unstructured play time outside is so important for kids.  They need time to themselves to explore and let their imaginations run wild.  But in the rain?  Parents don't usually want to let them play outside in the rain because, "Oh no!  They will get wet!"  But hey, as long it isn't a thunderstorm, let them play!  It's just water!  It will dry.

As parents, we need to realize that the backyard totally transforms when it rains.  The sensory experience of raindrops falling on you is like taking a shower outside every where you walk.  Toys can now have new uses as they scoop up water or make waves in puddles.  Oh and the puddles!  Splashing in puddles and stomping in mud are special treats for kids.  Sure they get a little messy but mud washes away with a little soap and water.  It is a small price for such a classic childhood experience.

And parents, when was the last time you splashed in a puddle or stomped in the mud?  I think God blesses us with children to help us slow down from the busy days of our adult lives and focus on the little joys He provides us each day in the world around us.  Sadly, we are usually "too busy" to notice them.  Next time it rains, let your kids play splash around and get wet...and take off your shoes and jump in a puddle with them.  Your kids will laugh and think you are the coolest parent in the world.  And you will find a new joy to your day as well.
at June 25, 2014
Email ThisBlogThis!Share to TwitterShare to FacebookShare to Pinterest
Labels: art, at home, free, imagination, messy, Nature, Nicholas, play outdoors, Rachel, silly kids