We are at Medieval Times today.  We recently saw their new tournament show but today we aren't here for the show.  Because of some PR work I have done for Medieval Times here on the blog, they included us in a special invitation to be a part of their 2014 TV commercial shoot.

The kids are super excited and it is a great opportunity for them to be a part of the "behind the scenes" of TV magic. 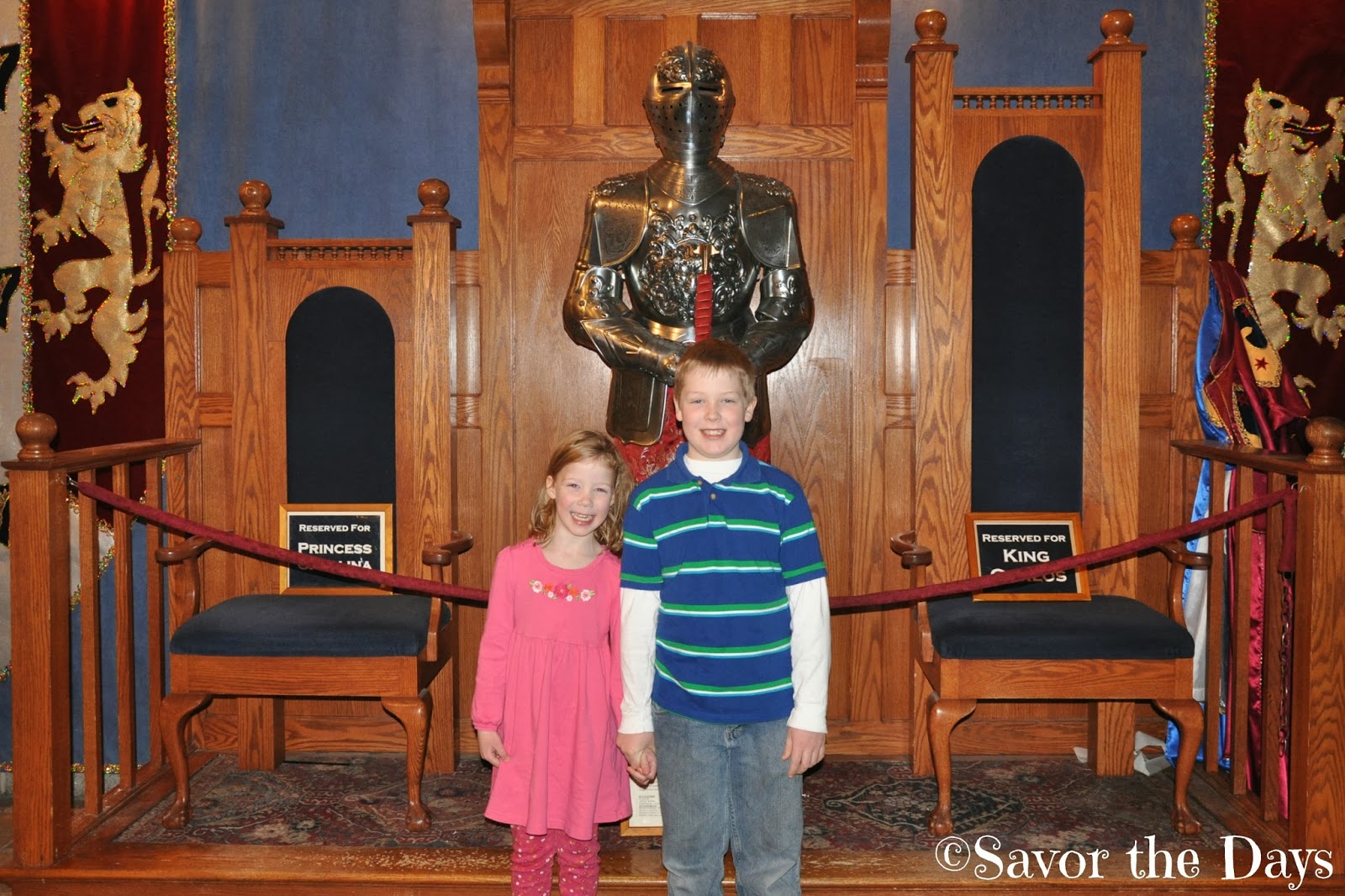 We were greeted with lots of wonderful food for lunch...salad, lasagna, tortellini alfredo, hot dogs, popcorn, fruit, chips, candy, and more.  The kids thought the smorgasbord was a pretty cool deal. 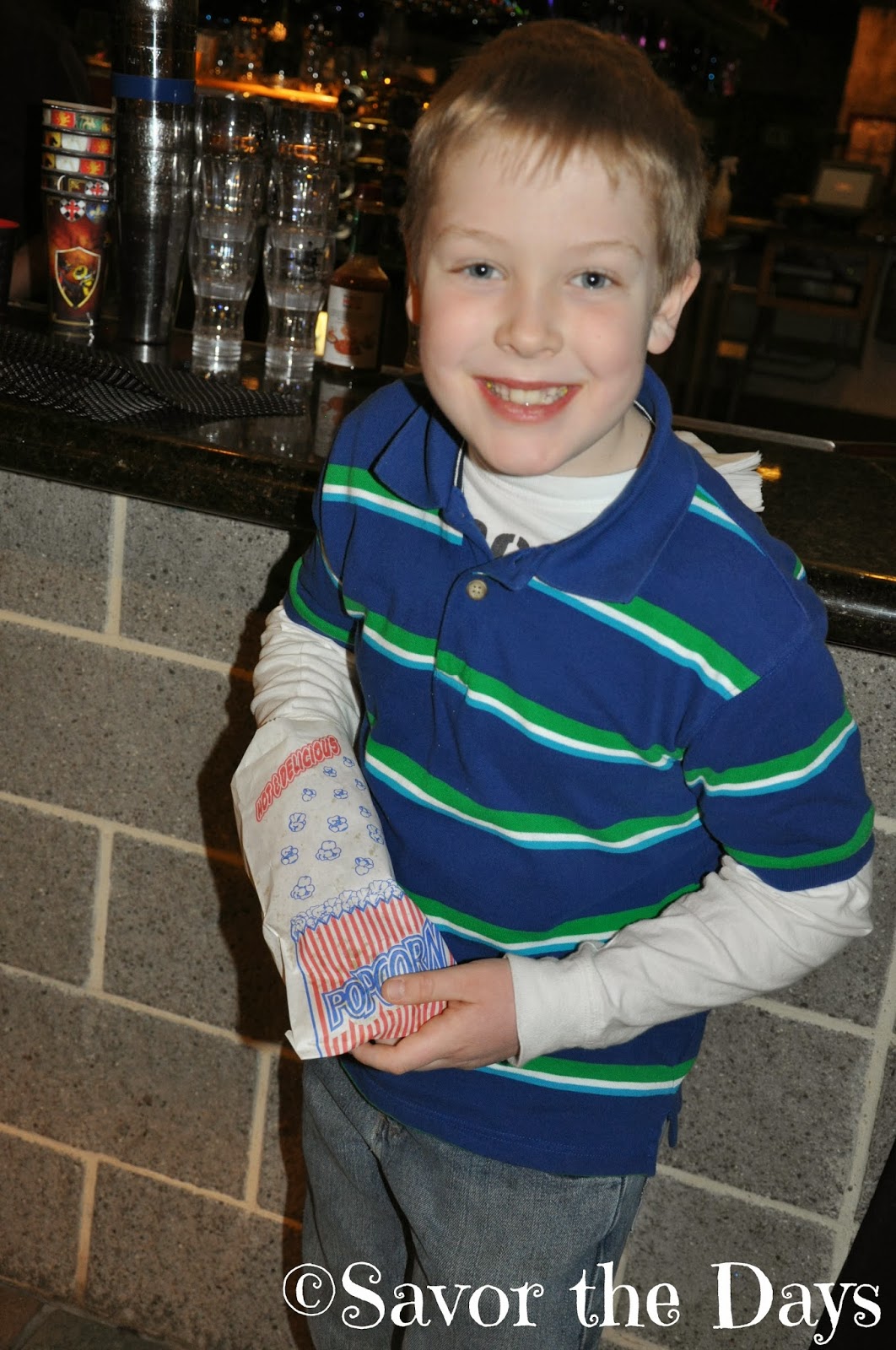 We has some time before the shooting would begin so we looked at the horses. 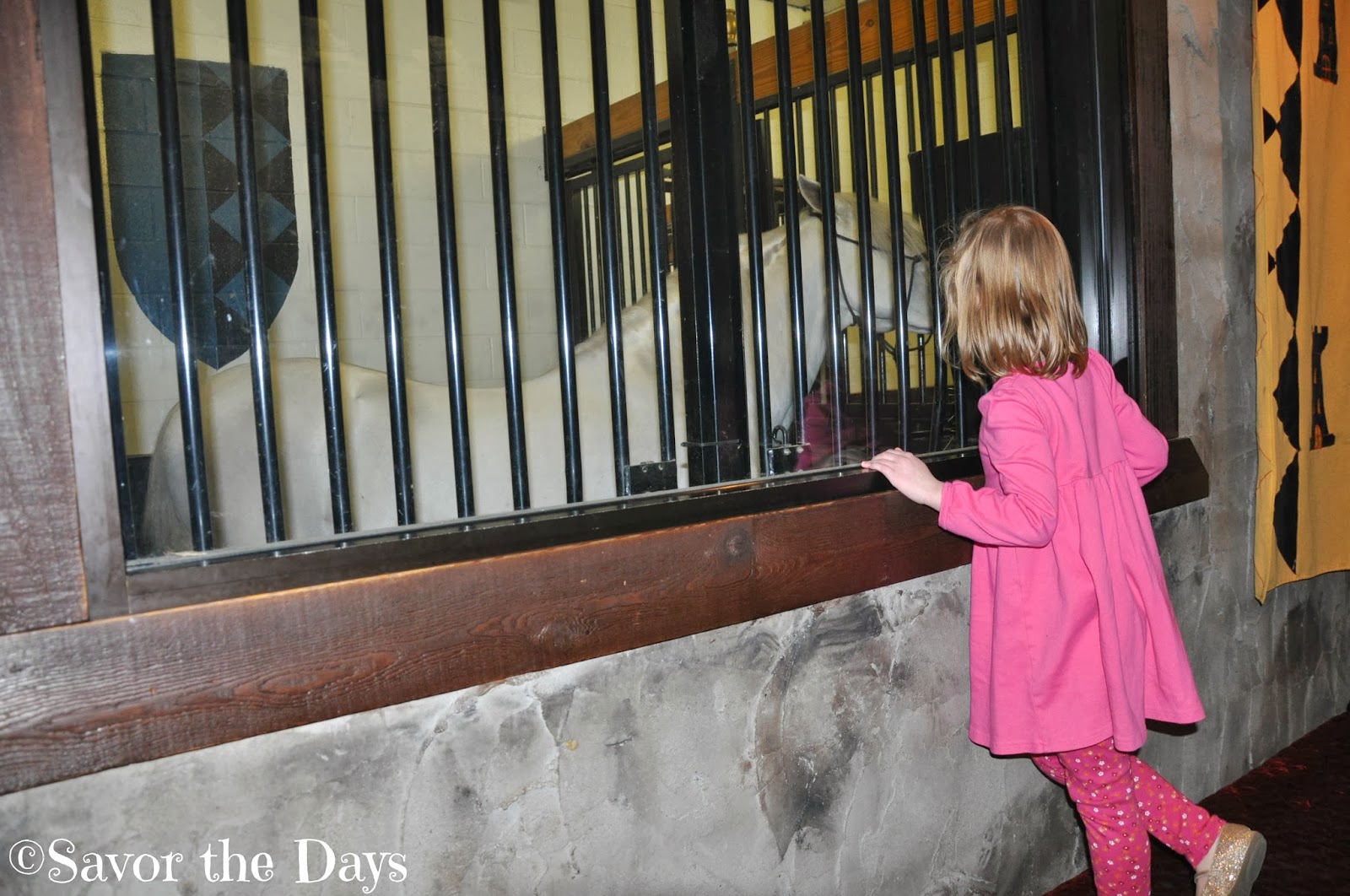 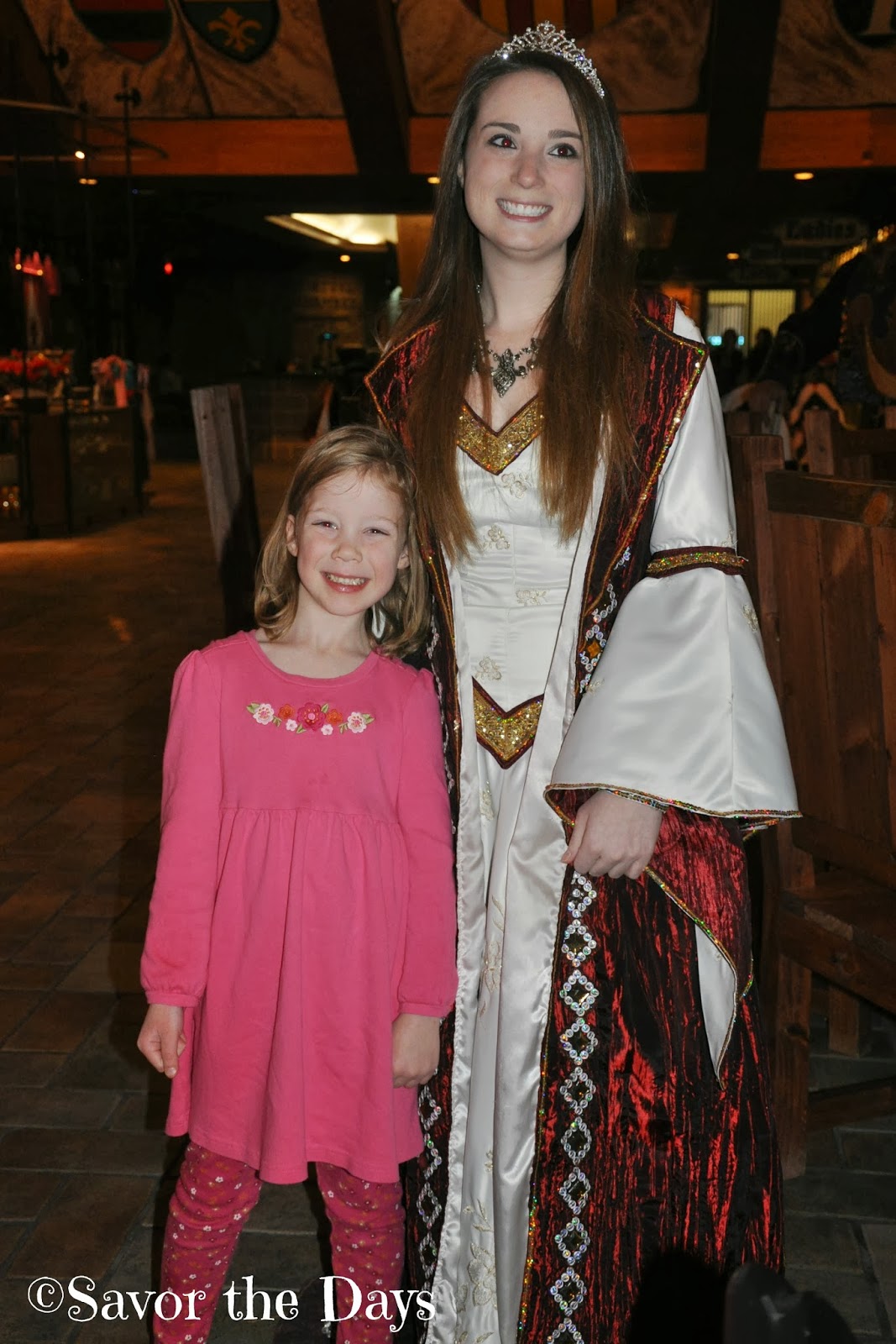 And Nicholas hung out with the Falconer. 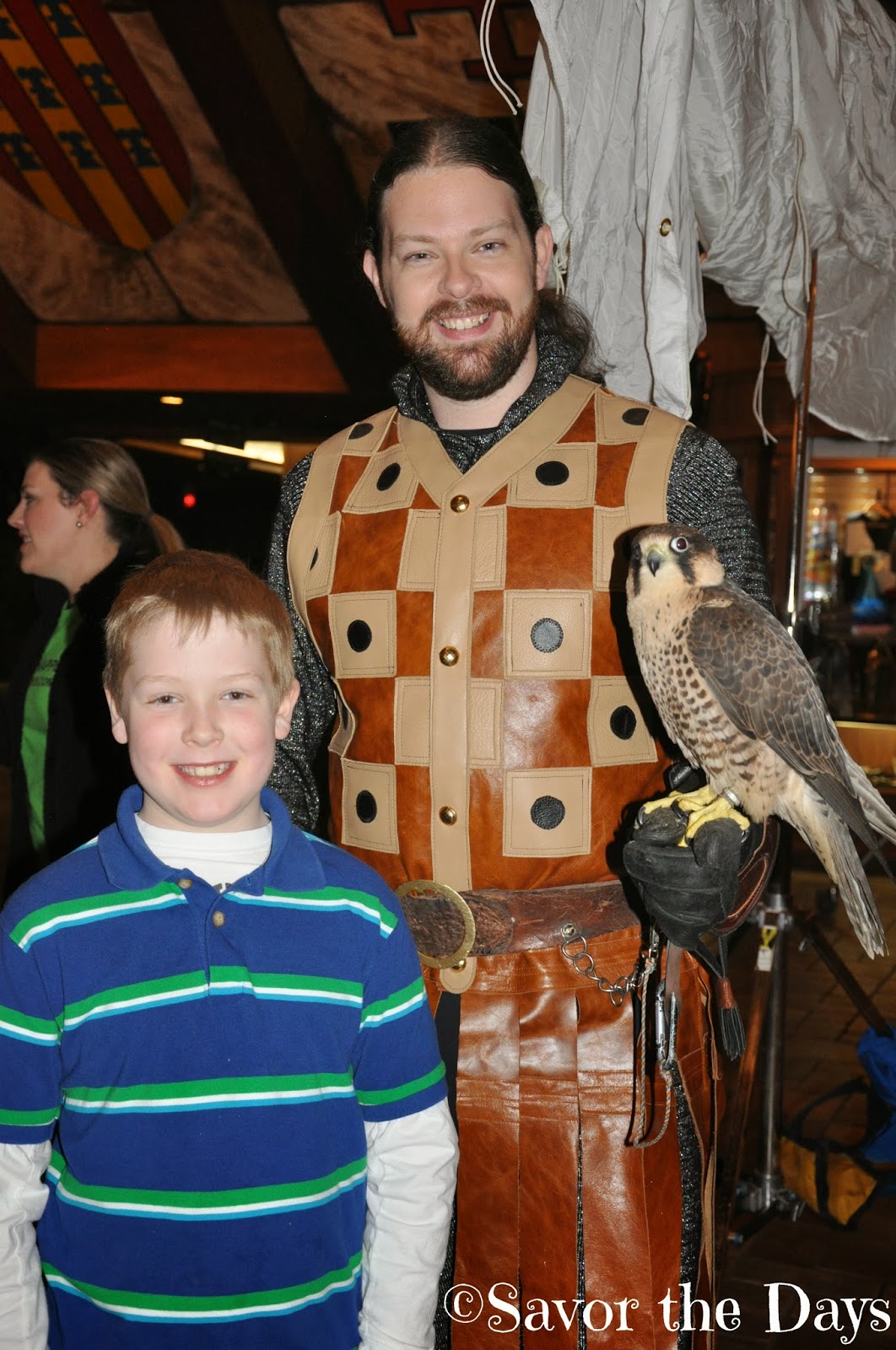 Finally it was time to enter the arena.  How exciting! 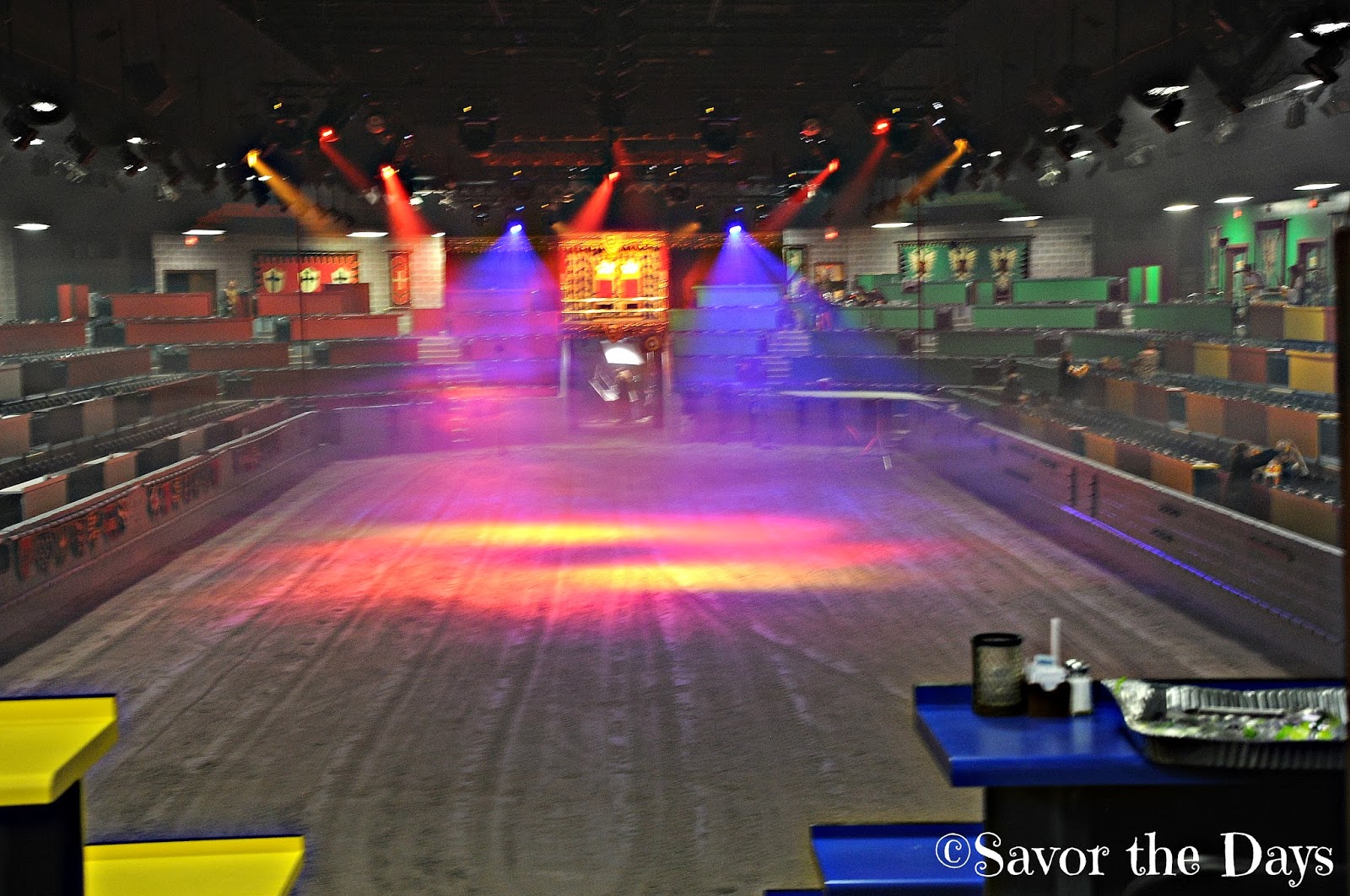 It was funny to see the first aid station for the filming crew.  The Pepto Bismol and Advil had already been cracked open.  This is such a big production that I'm sure they have been working overtime to get ready for this day. 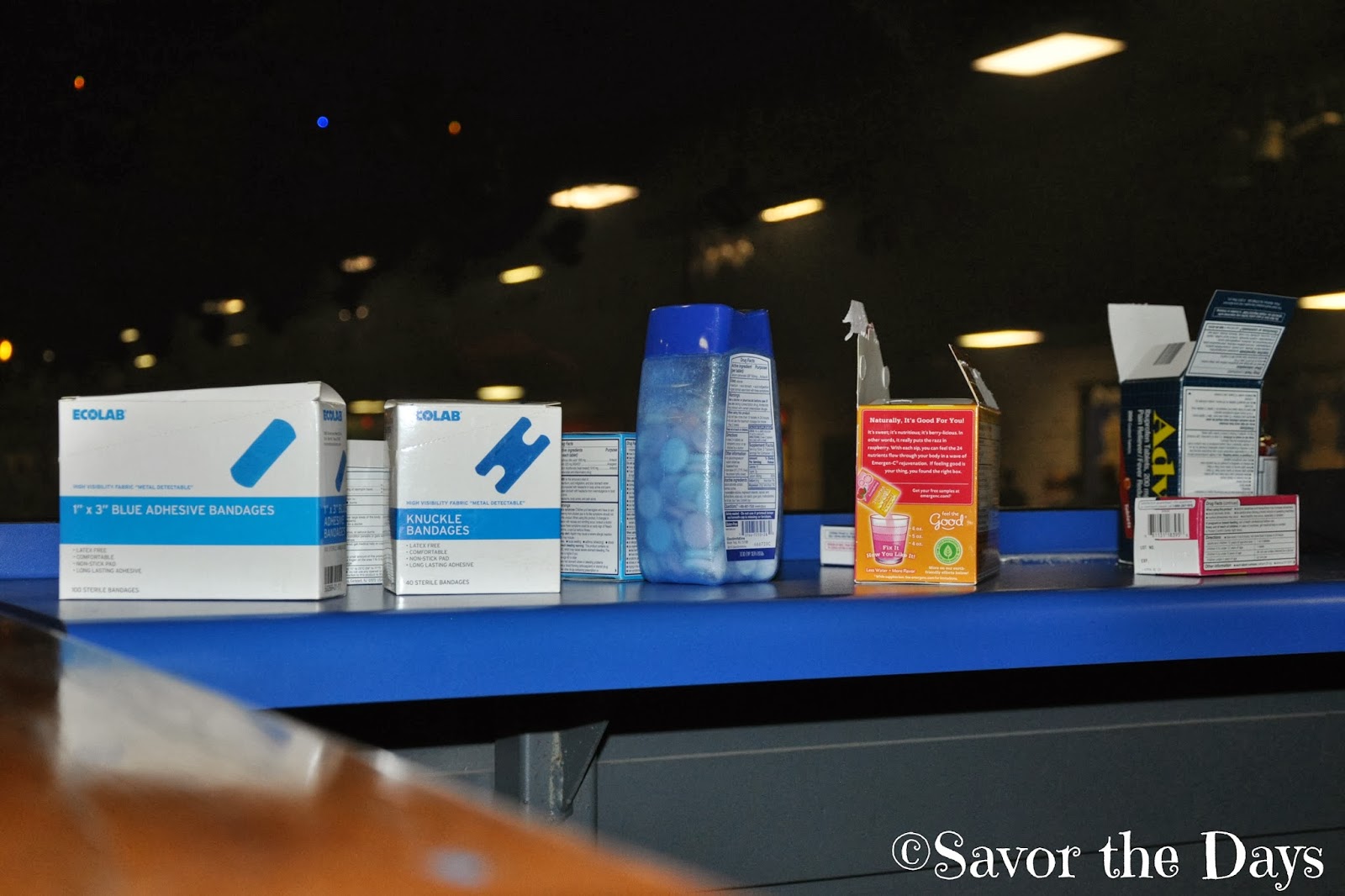 We were seated in the section for the red and yellow knight and given the traditional crowns. 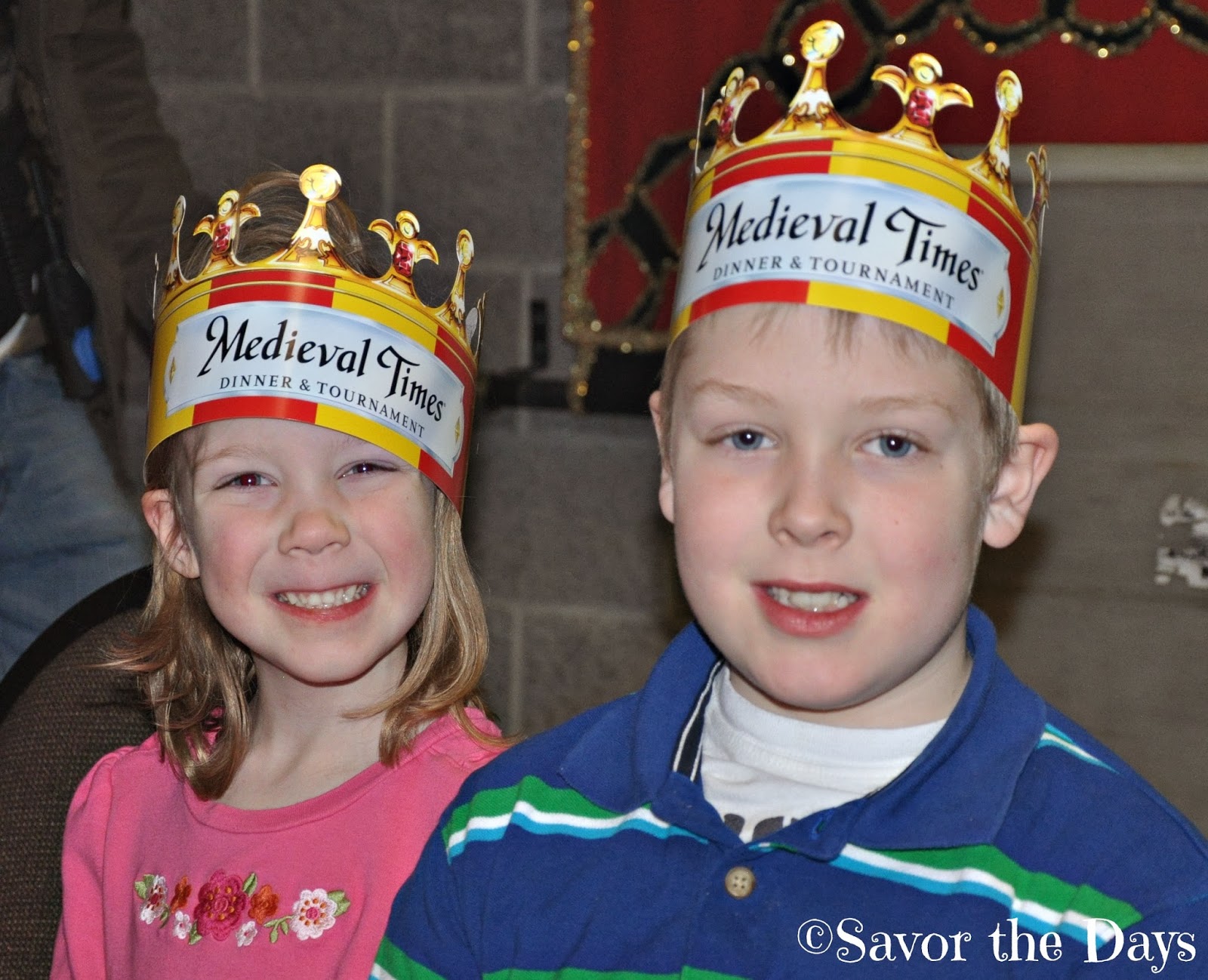 The arena is quite large but I believe there are only about 50 families here so we just filled up the red and yellow section. 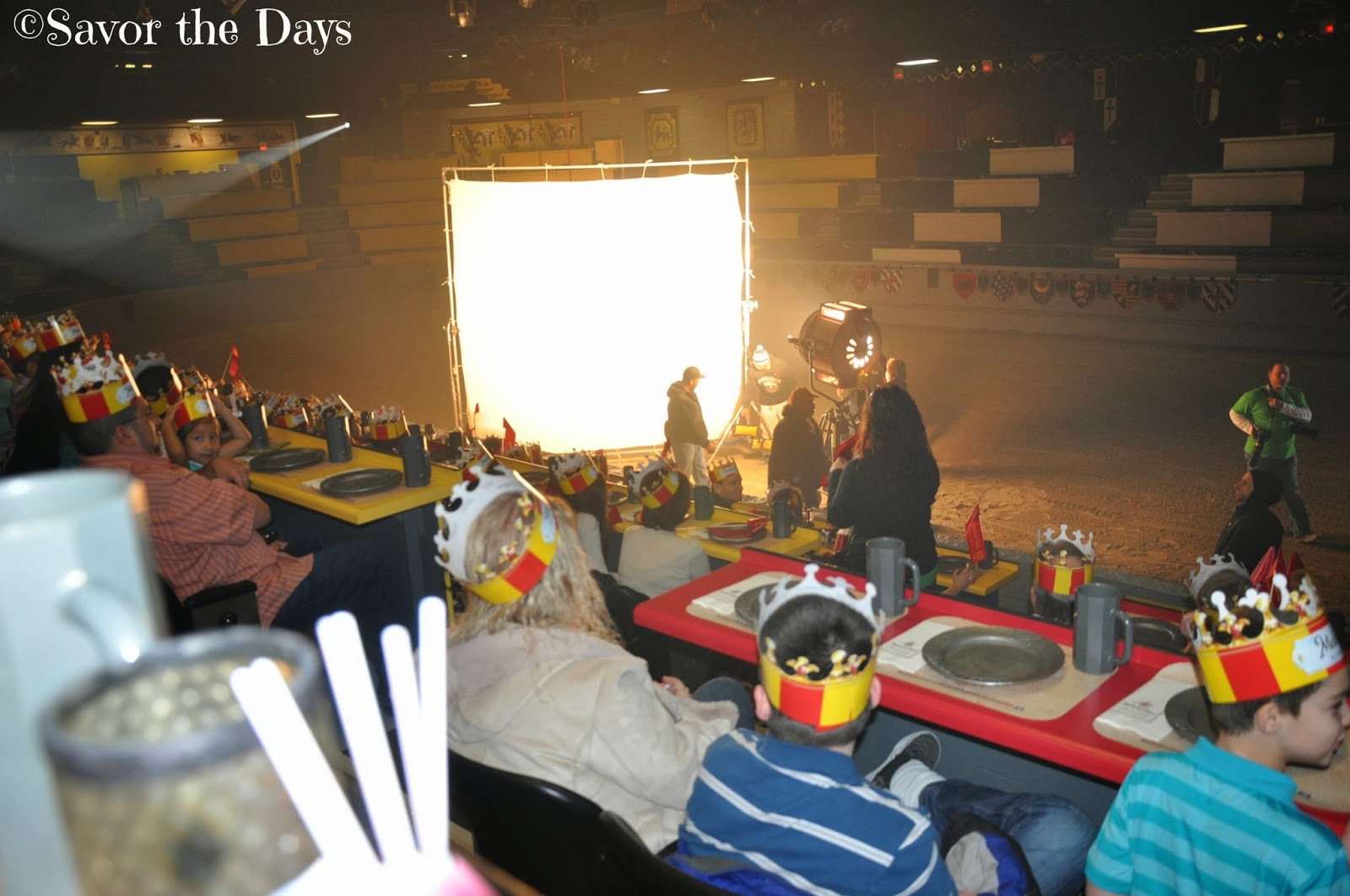 There was a lot of down time as the crew finished setting up and making sure everyone looked their best. 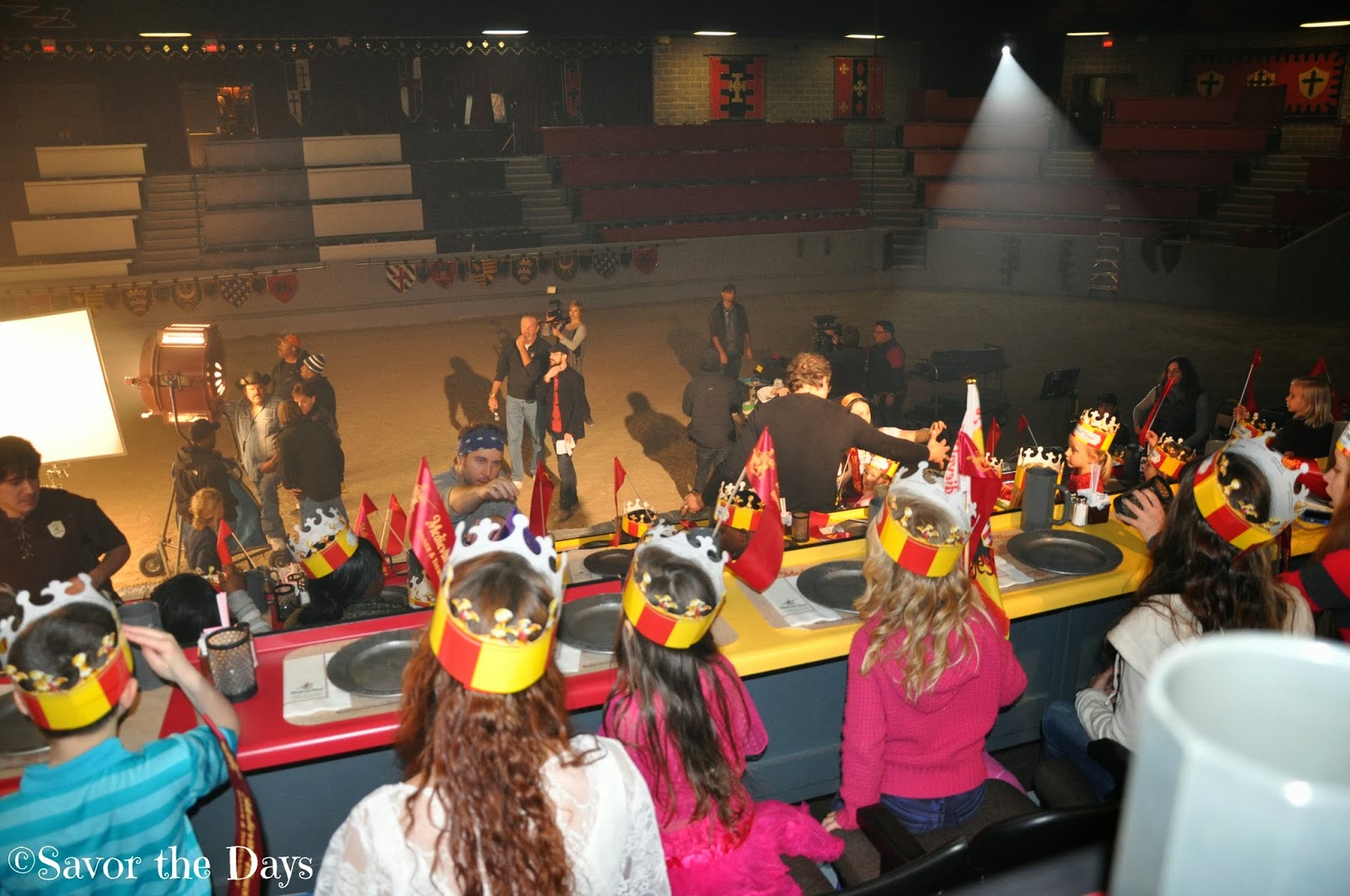 We were sitting on the back row and got to talk to this guy a lot.  He is in charge of the artistic side of things.  He passed out princess crowns and swords and shields to random kids throughout the audience, took the sheen off of someone's crown, cleaned wine glasses of fingerprints, etc.  It seemed like a fun job. 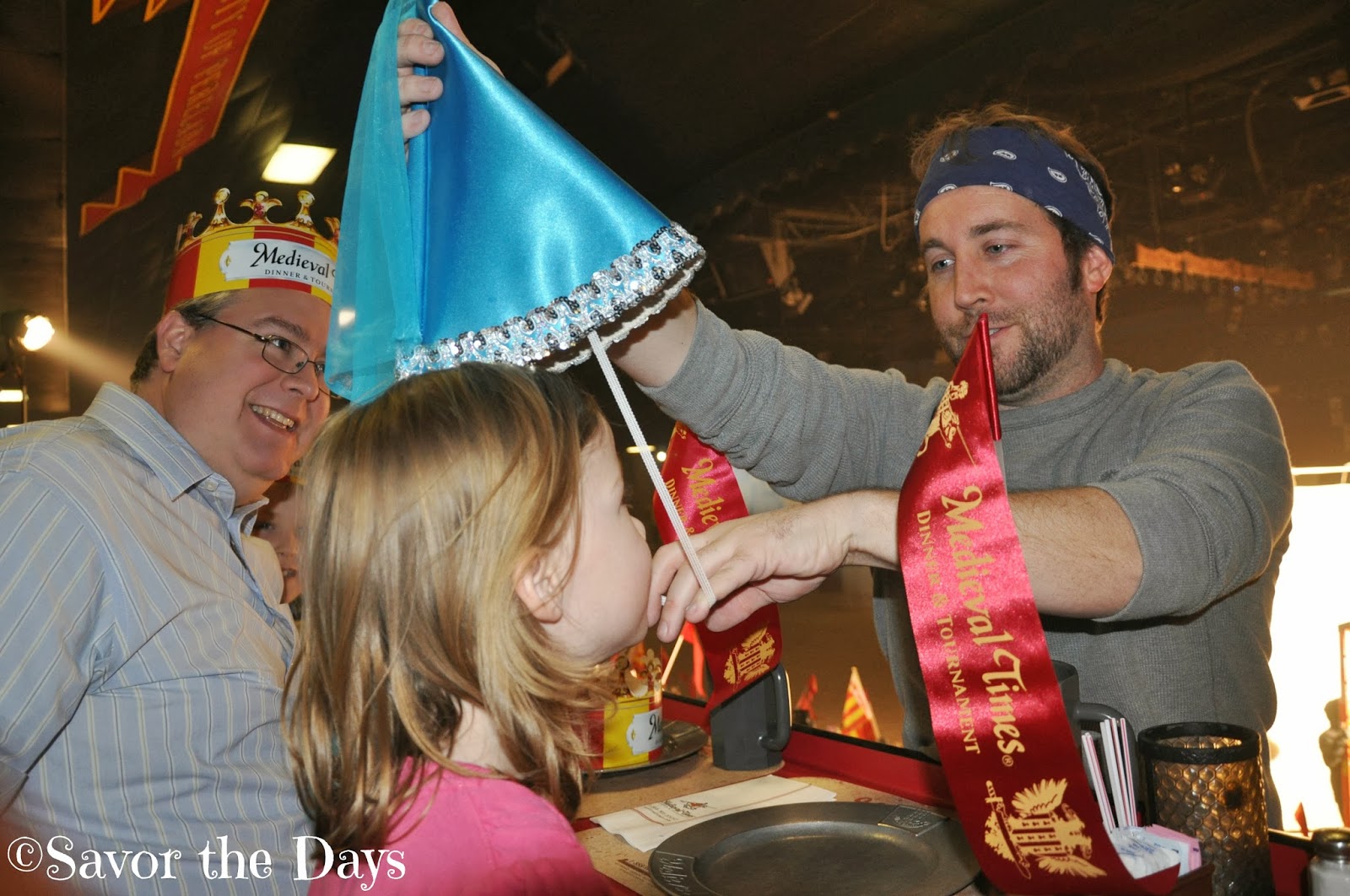 Stuart and Nicholas were being silly as we waited. 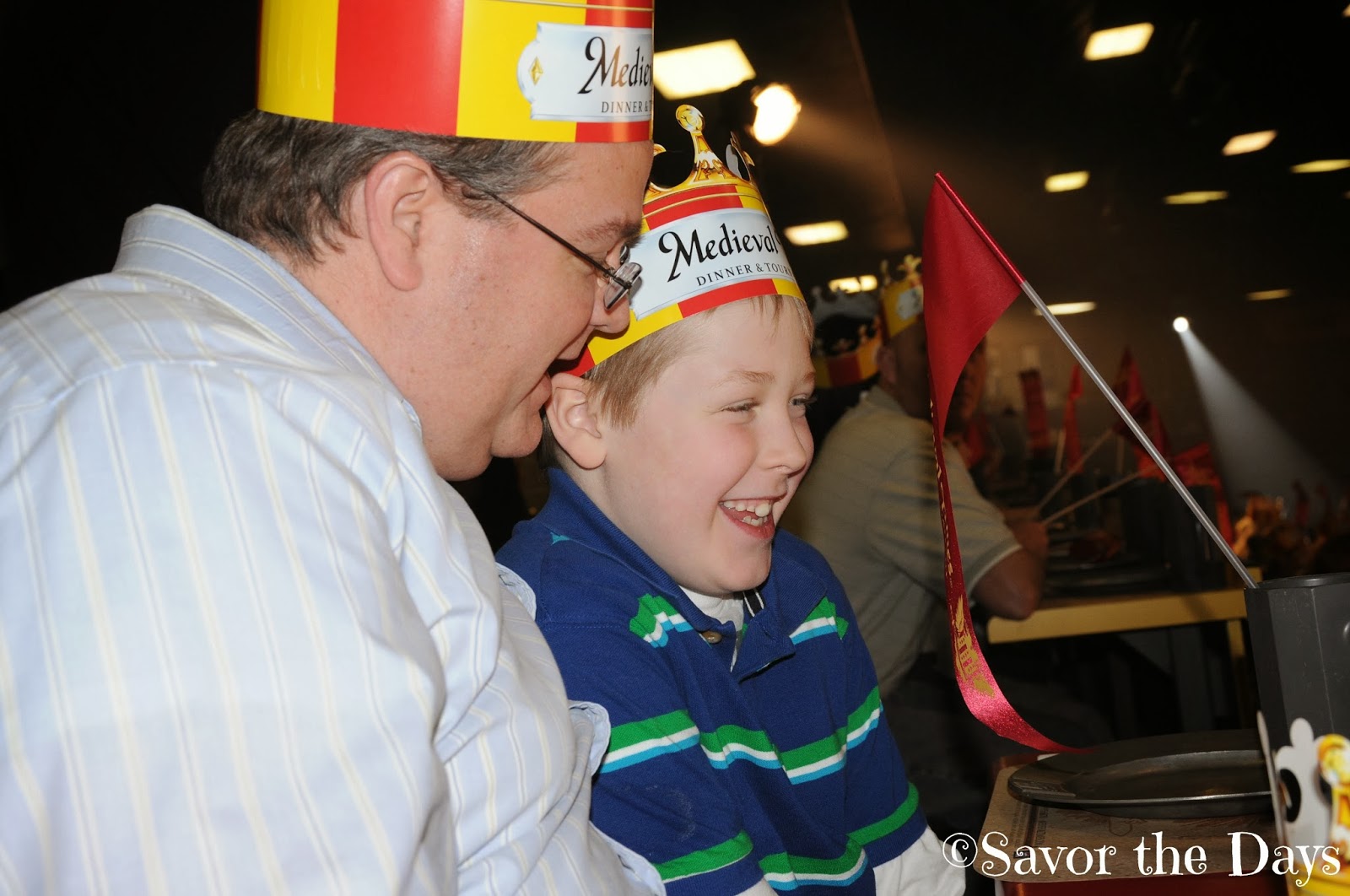 Time to roll the cameras!  Here is a video of one of the many things we did today....random cheering and banner waving!

There were some designated people in the crowd that the cameras focused on for several shots.  There was a couple, a girl to be crowned, and also a dad with his son.  It was fun watching all of the retakes as they would tell the people to do things a little differently or change the camera angle or wipe more fingerprints off the wine glass.

Then they passed out the food.  Oh I love the food at Medieval Times.  They have an amazing roasted chicken.  It was around 6:00 pm by now and we were getting hungry again.  But we all understood that the food was just there so they could be sure it showed up in their video shots so no one ate it.  How hard it was to not just take a bite but we resisted....well, most of us did.  Stuart eventually just had to take a bite of his potato. 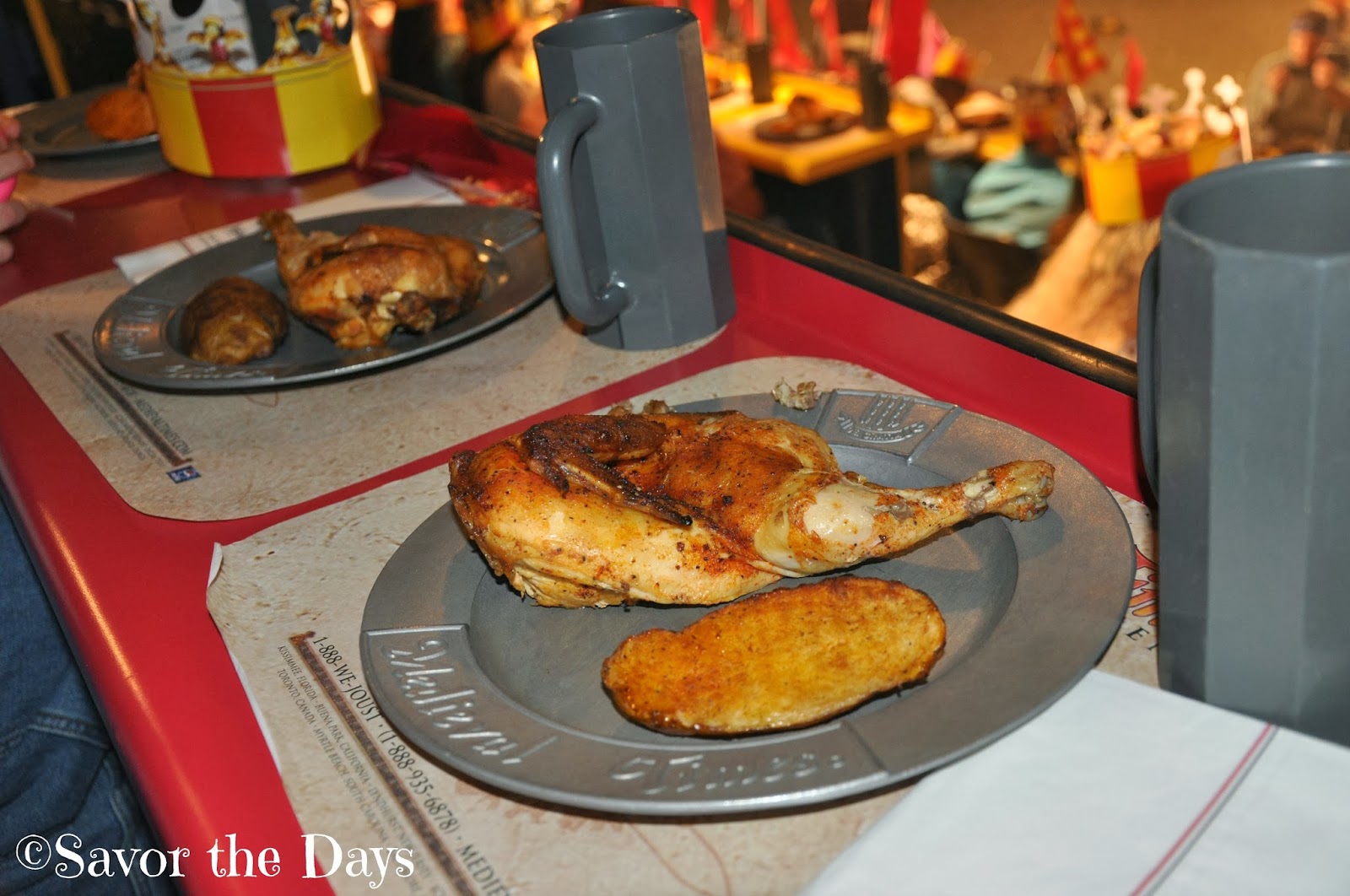 Taking random pictures to try to keep my mind off of the food. 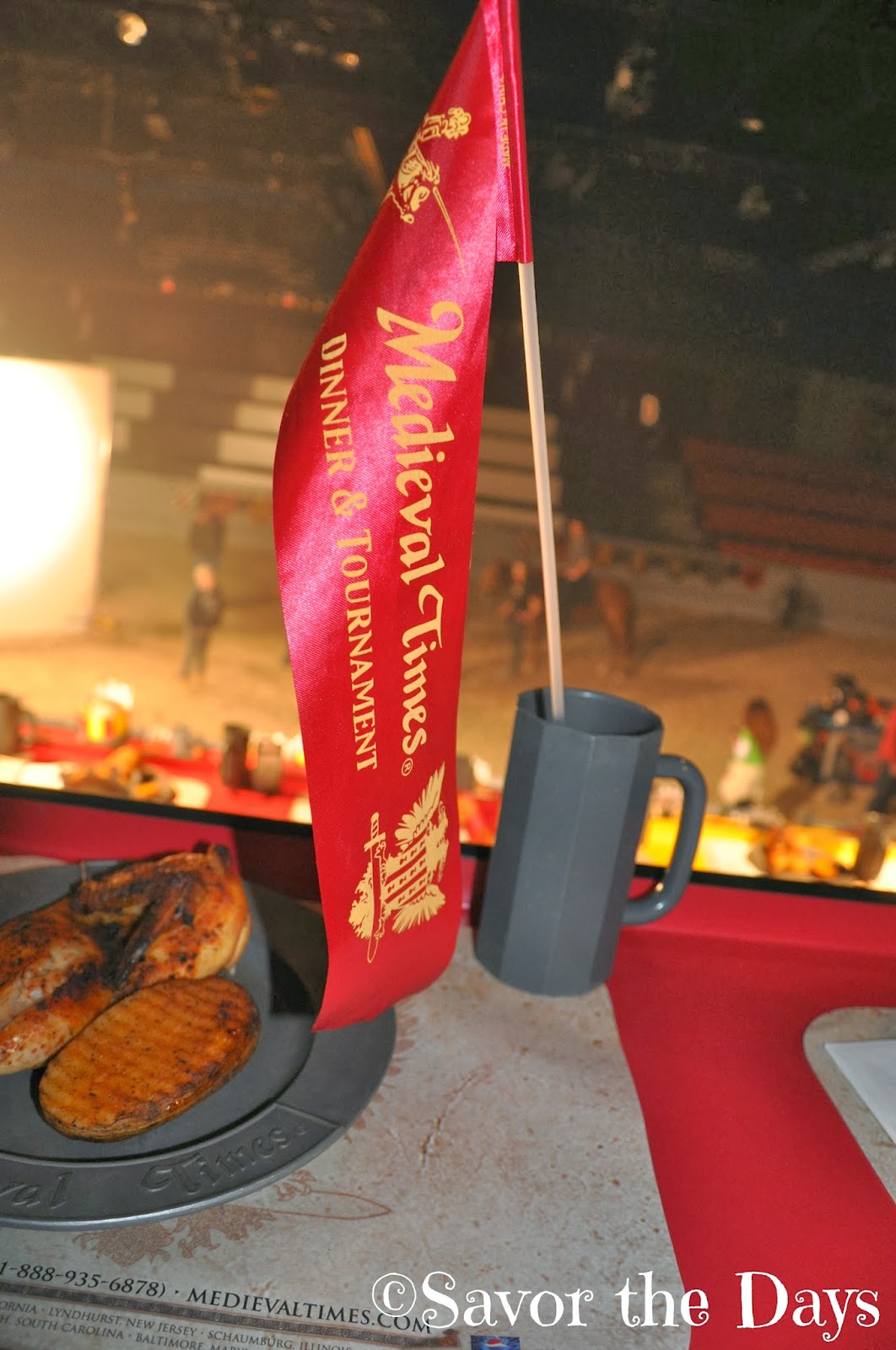 We did eventually get to eat and oh man it was yummy!

They took some footage of the red and yellow knight riding up on his horse and throwing flowers into the audience.  Rachel wanted to catch one so badly and the knight tried to throw it to her but it was heading right for me so I reached up and caught it to be sure Rachel could have it. 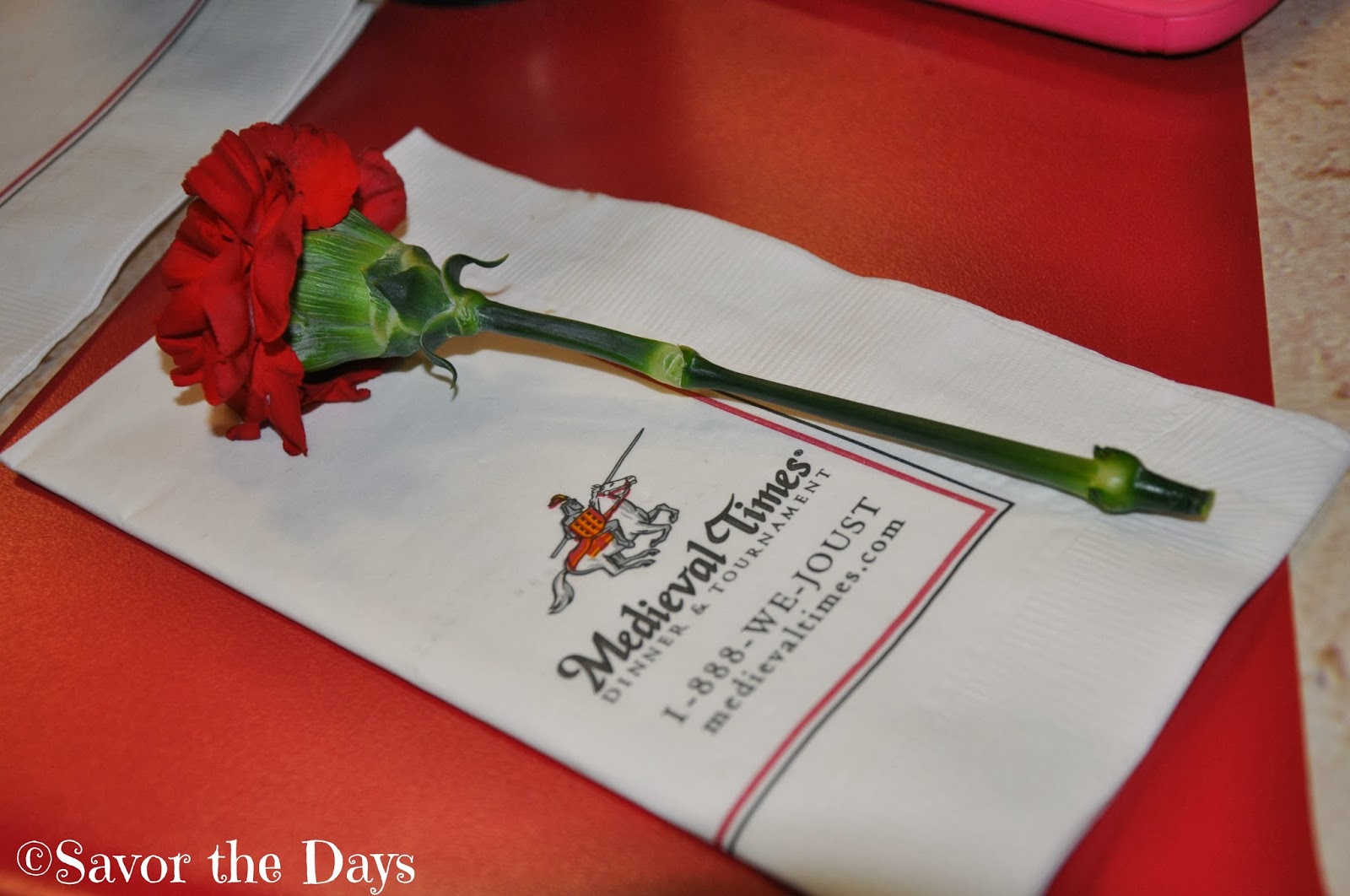 We all had a great time today. 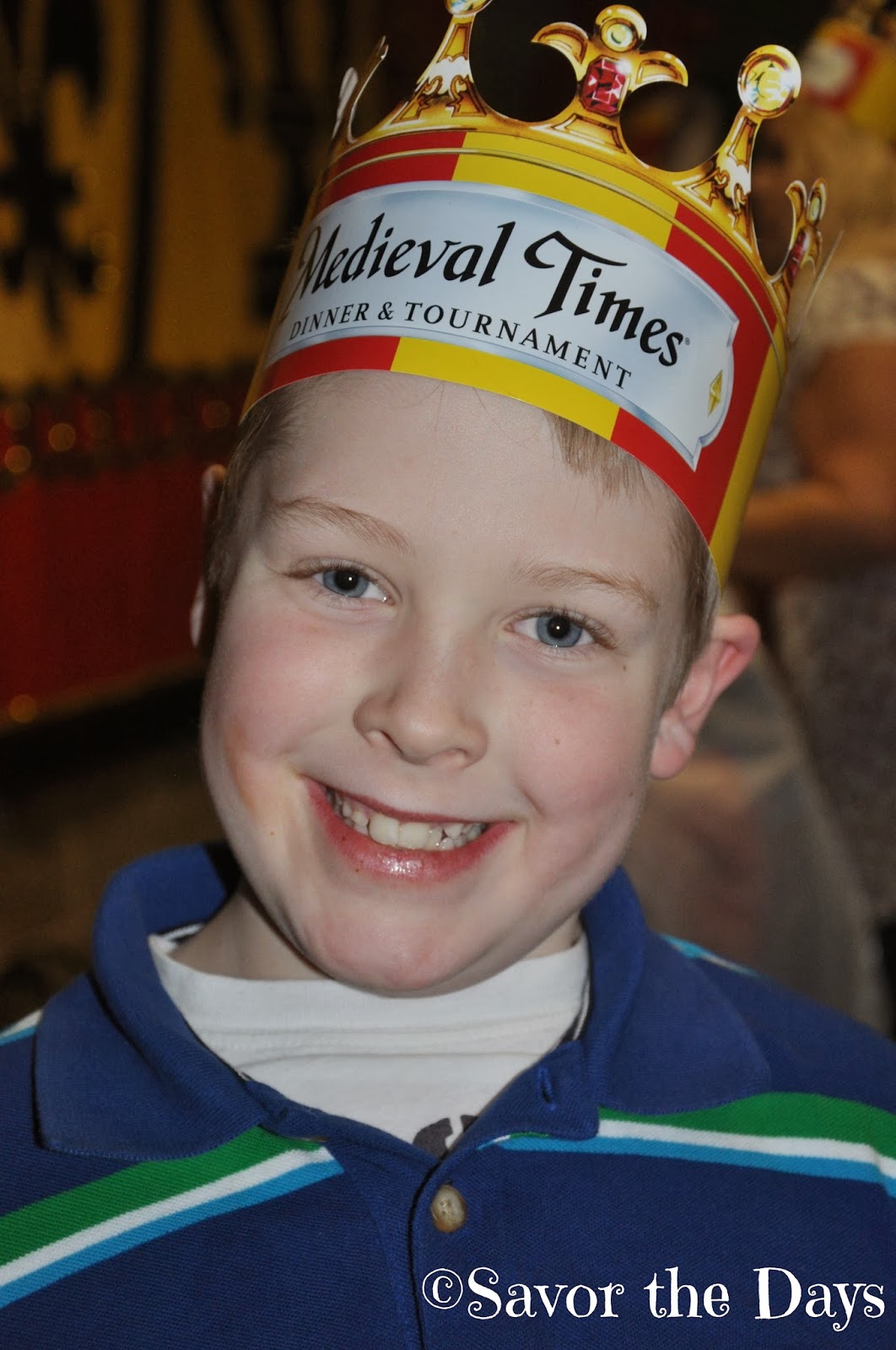 The kids felt like a true knight and princess and even had their own battle scene with each other's red banners. 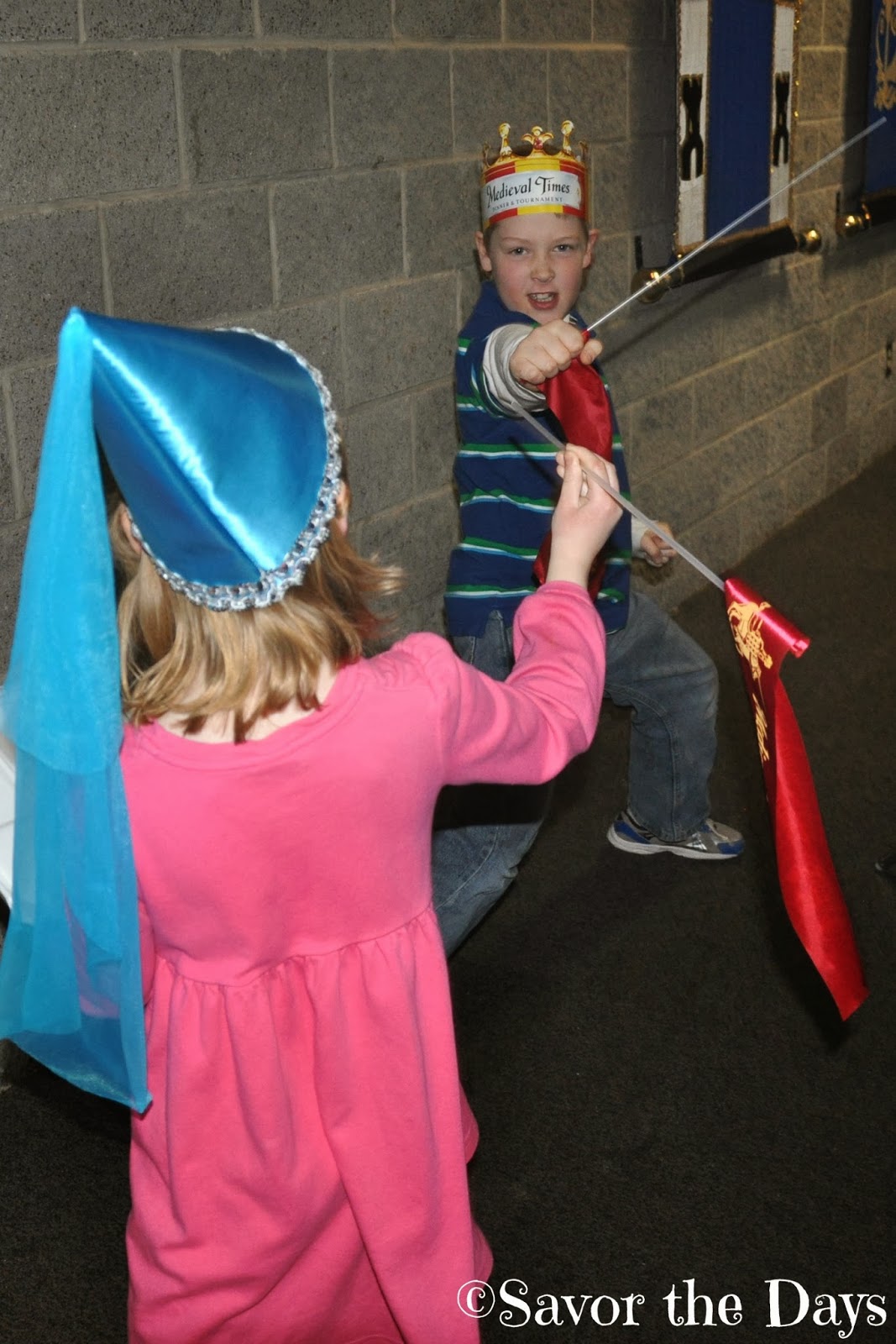 Rachel, of course, is in love with her special princess hat.  I love it too.  I remember my mom made a princess hat similar to this for me when I was little as part of a princess costume.  It was even light blue like this one! 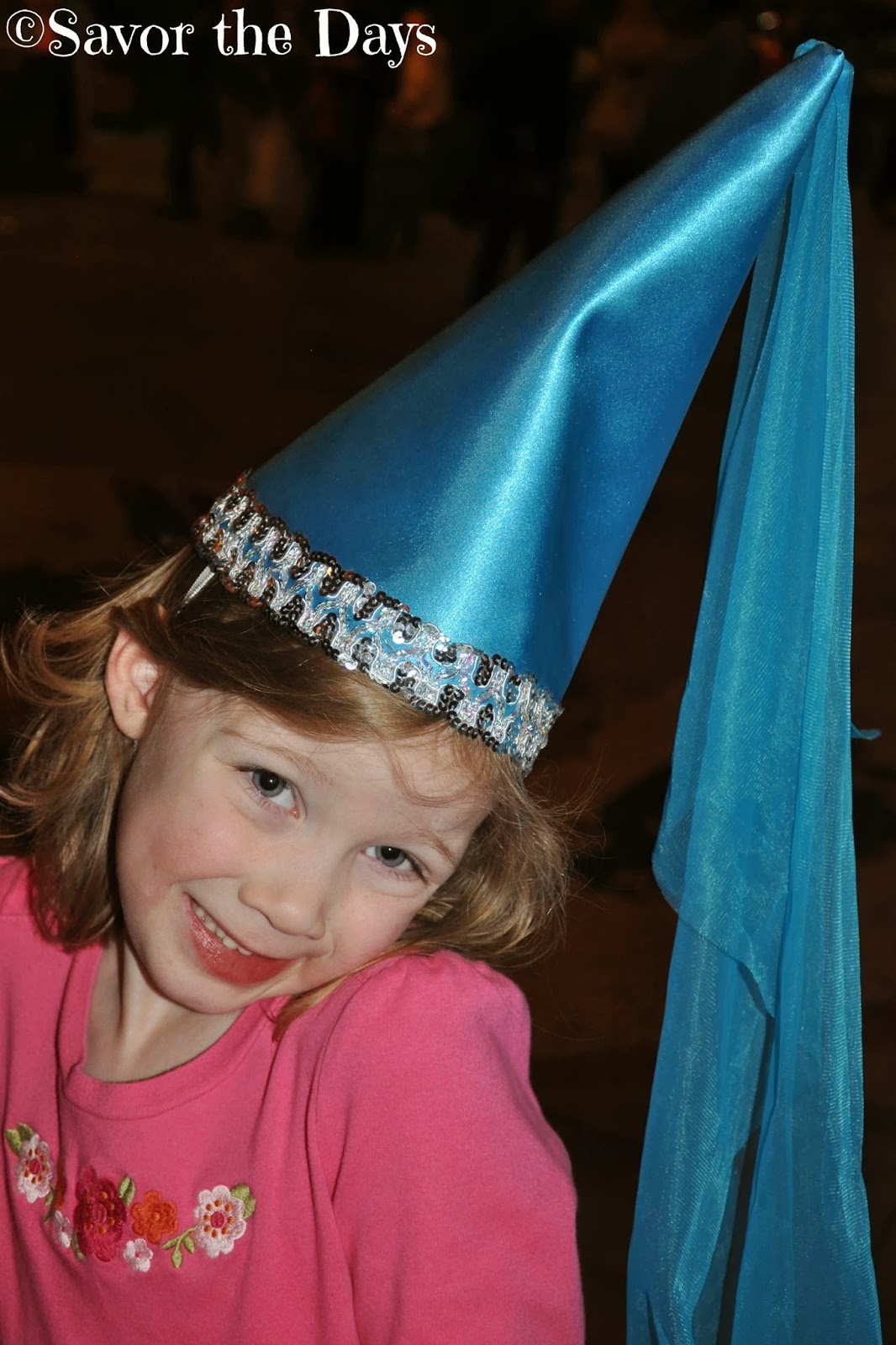 After shooting was done, we hit the ice cream machine in the Hall of Arms. 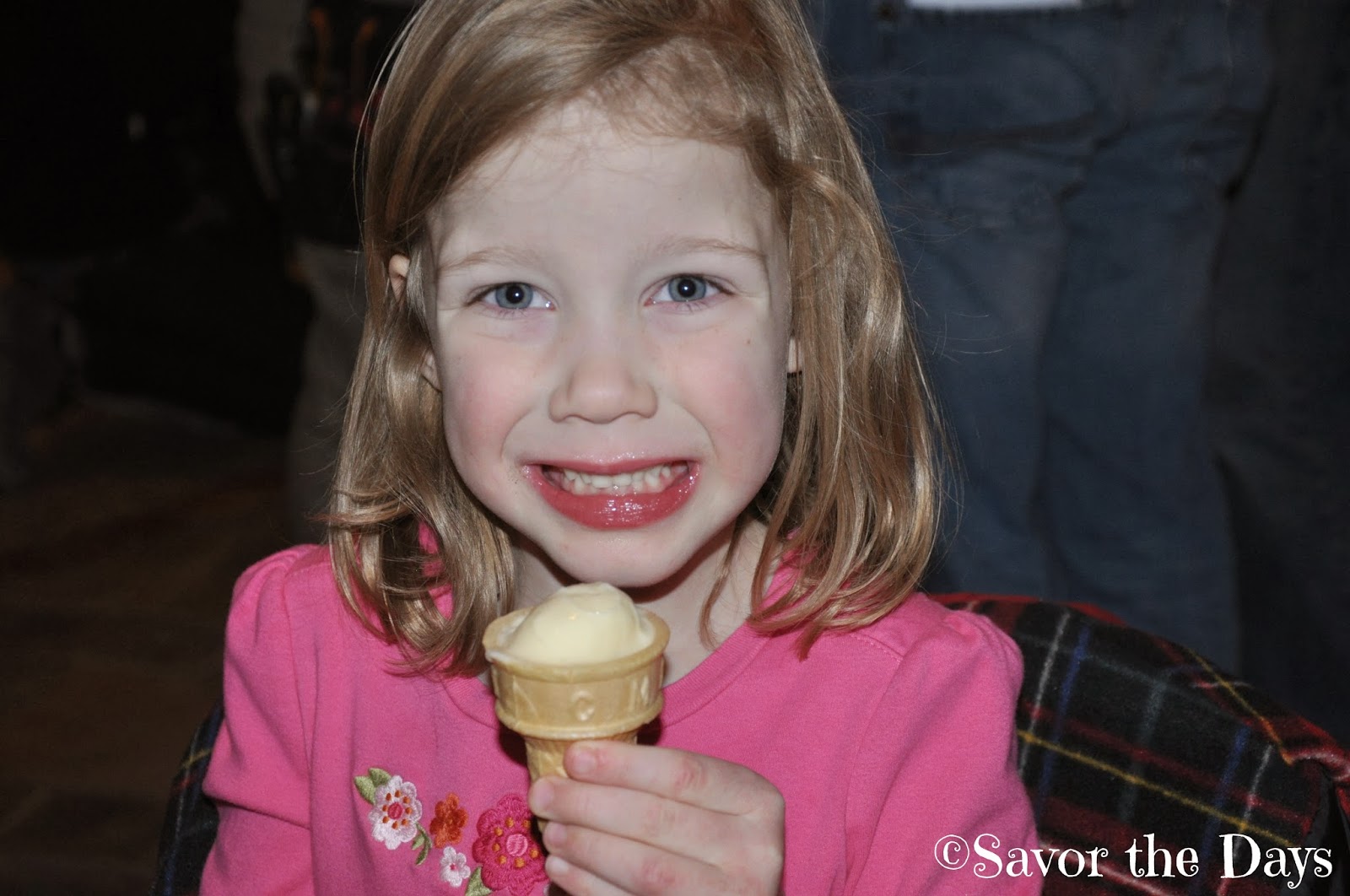 There was a little more shooting to do in the Hall of Arms.  We walked in front of the horse stables to be the "movement of a crowd" behind their video shots.

There was also a scene next to the gift shop where the dad and son that were filmed in the arena seats had swords and shields and acted out a battle.  They did it over and over for the cameras.  Stuart and Nicholas were even asked to walk up to the gift shop counter in the background to be "customers #2" but I was too busy watching them and forgot to get a picture of them in action. 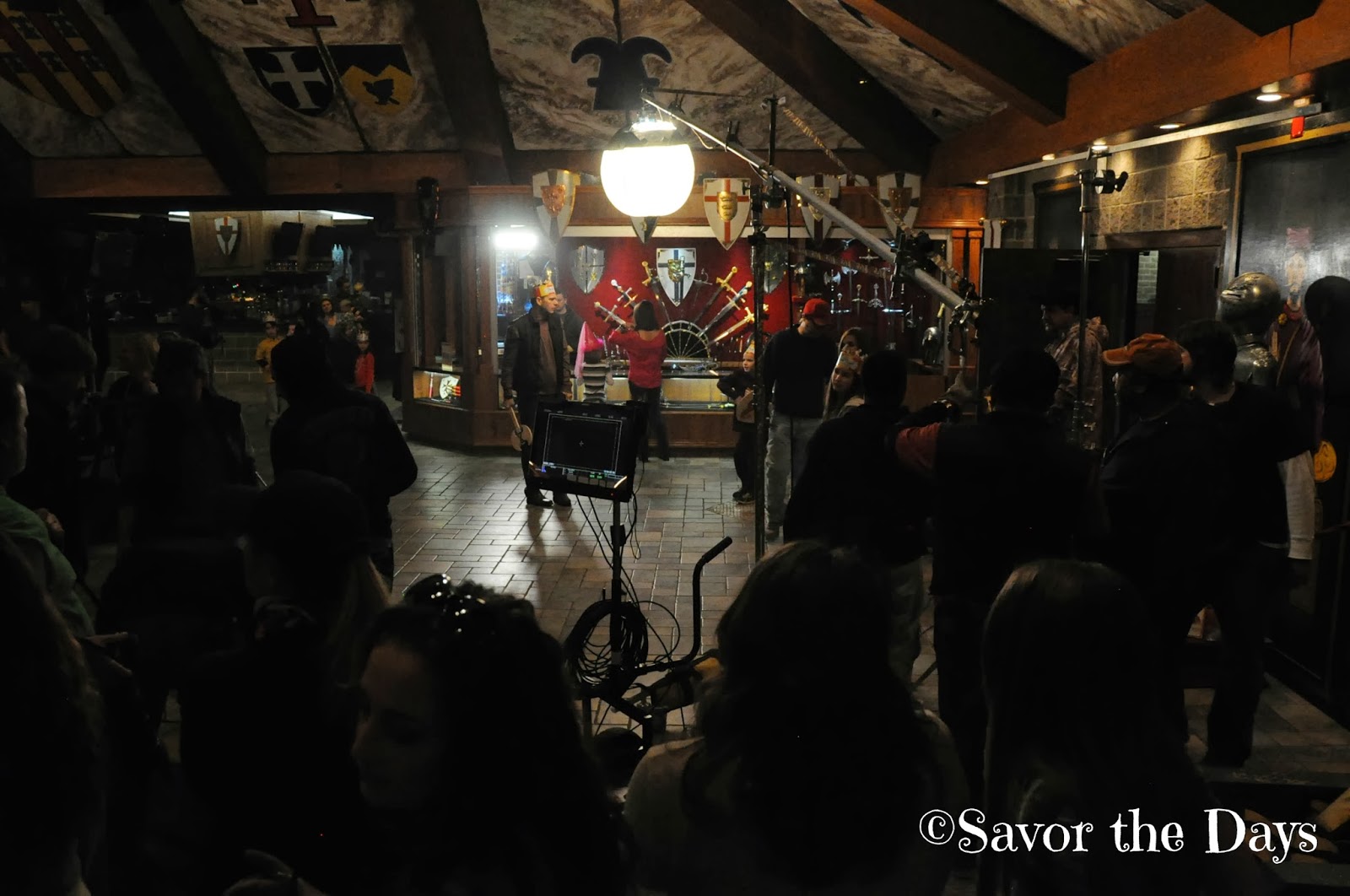 Afterwards, Rachel wanted to fight Daddy like she had watched the other dad do with his son.  She was so happy when he took the challenge. 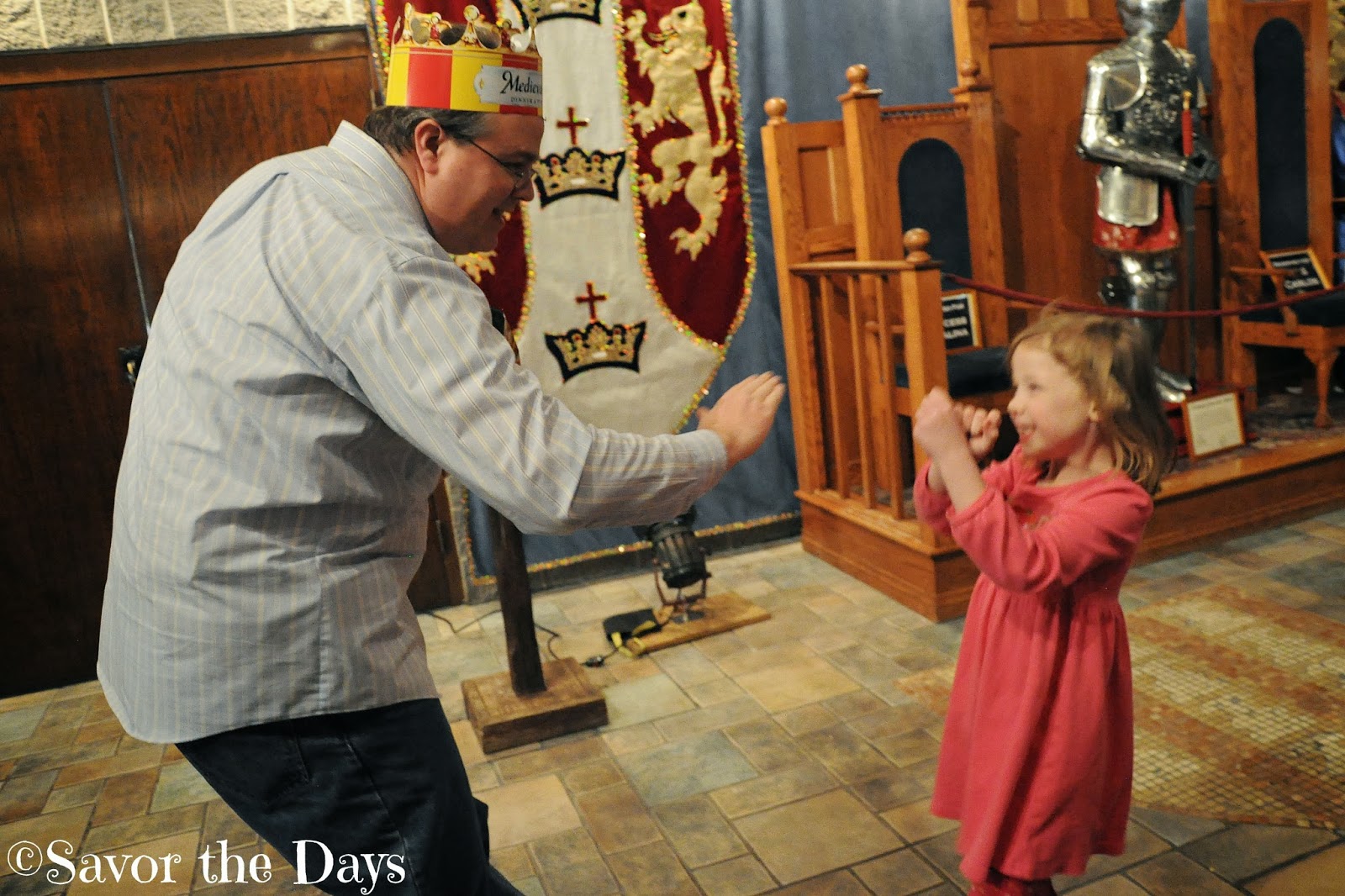 What an amazingly fun day!  We'll be back tomorrow for a few more hours of shooting.
at January 28, 2014
Email ThisBlogThis!Share to TwitterShare to FacebookShare to Pinterest
Labels: family, field trip, food, Nicholas, Rachel