Rachel Got a Golden Ticket!

Rachel has been participating in Hockey Academy twice a week.  It is a great program for developing skills to use in the game of hockey.  She has been very blessed that one of the coaches in her Hockey Academy just happens to be Brad Lukowich, a former NHL Dallas Star and two-time winner of the NHL Stanley Cup.  It is amazing that she is being coached by a former NHL player and Stanley Cup winner but all of that aside, she couldn't have a better coach.  Coach Brad is so good with kids.  He gives each of them his one-on-one attention.  He really pours his passion for hockey into the kids he coaches. 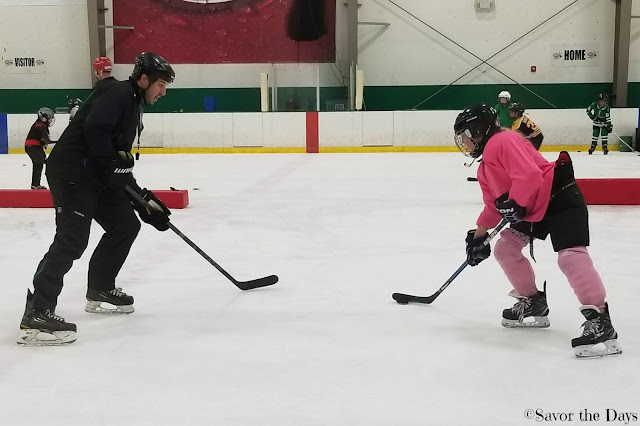 The Farmers Branch Star Center where we spend all of our free time has been a little crazy lately as they prepare to host hockey players from all over the country who are coming to Dallas for the NHL Draft this coming weekend.  They are also hosting an Xtreme Team hockey camp where Nicholas will be all week.  The rink is also having a special event on Thursday, June 21 called Texas Hockey Day.  There will be lots of free public skating, autograph sessions, a hockey clinic with the top NHL prospects, hockey games, a bounce house, and a lot more.  Coach Brad told Stuart he had nominated Rachel for a special, once-in-a-lifetime kind of event to take place on Texas Hockey Day but he didn't tell us more than that.  Stuart got a call from the Dallas Stars Executive Offices and he was told to bring Rachel to the offices on Monday at 2:15 to receive a package.  That's all she would say.  How exciting!!

We showed up in the autograph tunnel at the Frisco Star Center which is where we had been told to go.  There were six other kids and their families there.  Rachel was dying with anticipation! 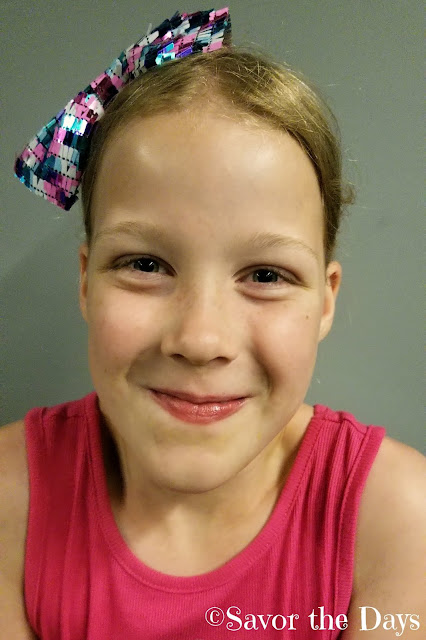 Eventually we were escorted into a special access area and taken down a long hallway. 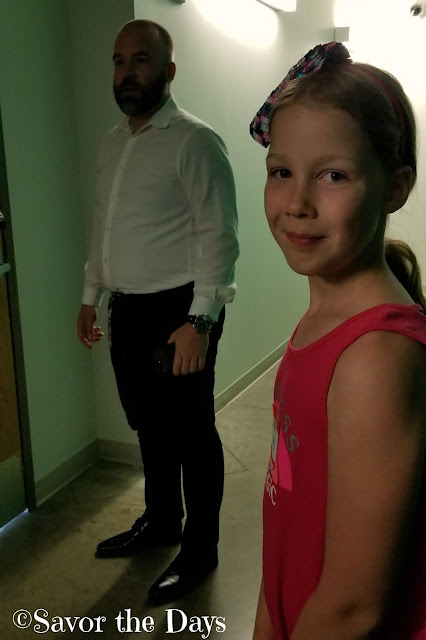 We were taken into the Executive Offices and saw lots of Dallas Stars signs everywhere.

We were told to go into this conference room.  Rachel was the first in line for the whole group and she walked in boldly, even with a camera man staring at her.

The kids all sat around a table wondering what was going to happen next. 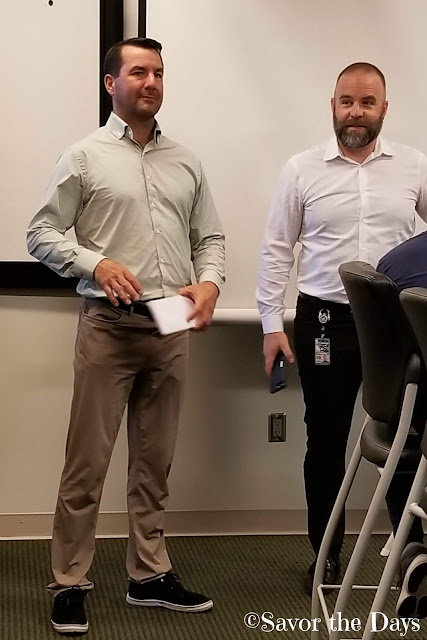 He talked to the kids about the upcoming Draft picks this weekend and he talked about Texas Hockey Day.  Then he said that someone important must really think they are special to have been invited there today.  Then he passed out an envelope to each child.  Inside the envelope was a Golden Ticket!

The Golden Ticket was a special invitation to participate in the NHL Top Draft Prospects hockey clinic on Texas Hockey Day.  This is an incredible opportunity for anyone that loves to play hockey (Stuart and Nicholas are so jealous!)  Rachel will receive a special jersey then she will participate in a hockey clinic where she will receive instruction from current NHL Dallas Star top players Jamie Benn, Tyler Seguin, and Ben Bishop!  There will also be the Top NHL Draft Prospects there as well as Dallas Stars Alumni and the Dallas Stars Xtreme Team!! 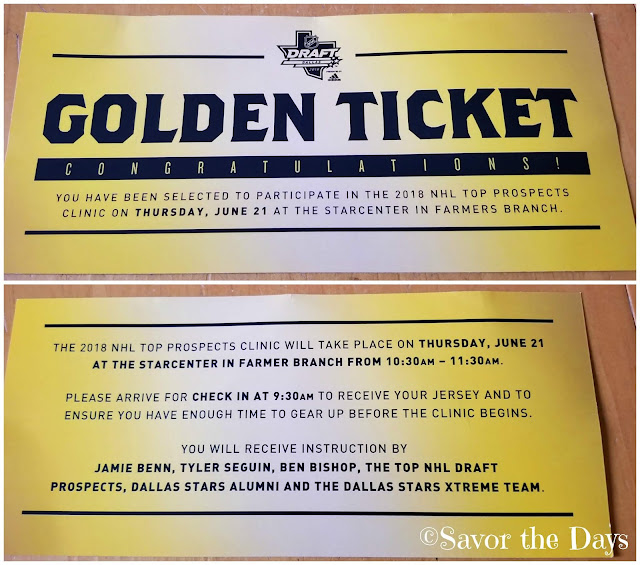 Everyone posed with Mr. Turco for some media pictures. 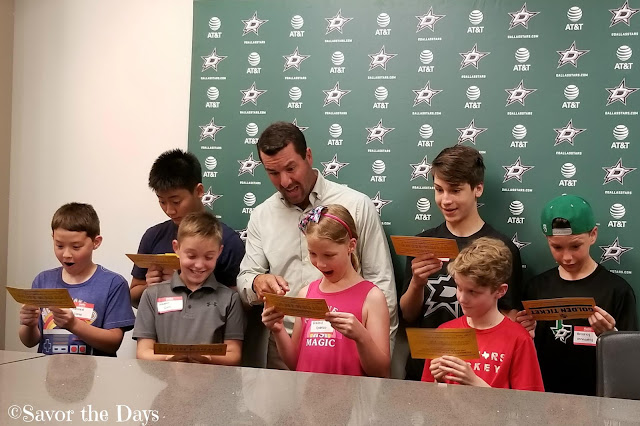 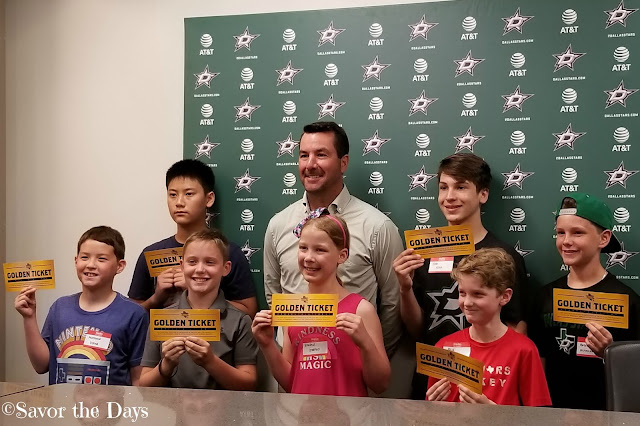 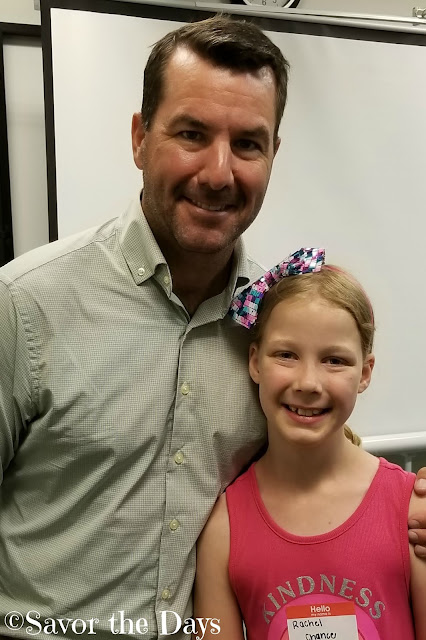 Stuart and I had brought along some things for signatures just in case so we got Mr. Turco to autograph two hockey pucks for us! 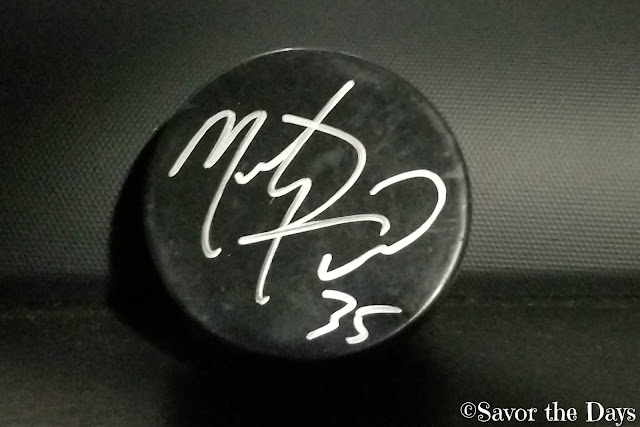 Back in the car, we were talking to Rachel about the Golden Ticket and she got so excited she fainted!  Just joking!  She is just a ham.

She is incredibly excited about this wonderful opportunity on Thursday.  We will be taking Nicholas to Xtreme Team camp that day for 8:30 and we will just stay there since Rachel is supposed to be there for 9:30.  There will be a lot of hockey fever at the rink that day since it will be Texas Hockey Day.  There will be events and special appearances by Dallas Star players all day long so we will probably just camp out at the rink all day to soak up all of the excitement.
at June 18, 2018
Email ThisBlogThis!Share to TwitterShare to FacebookShare to Pinterest
Labels: Dallas, Dallas Stars, family friendly, field trip, hockey, homeschool, ice skating